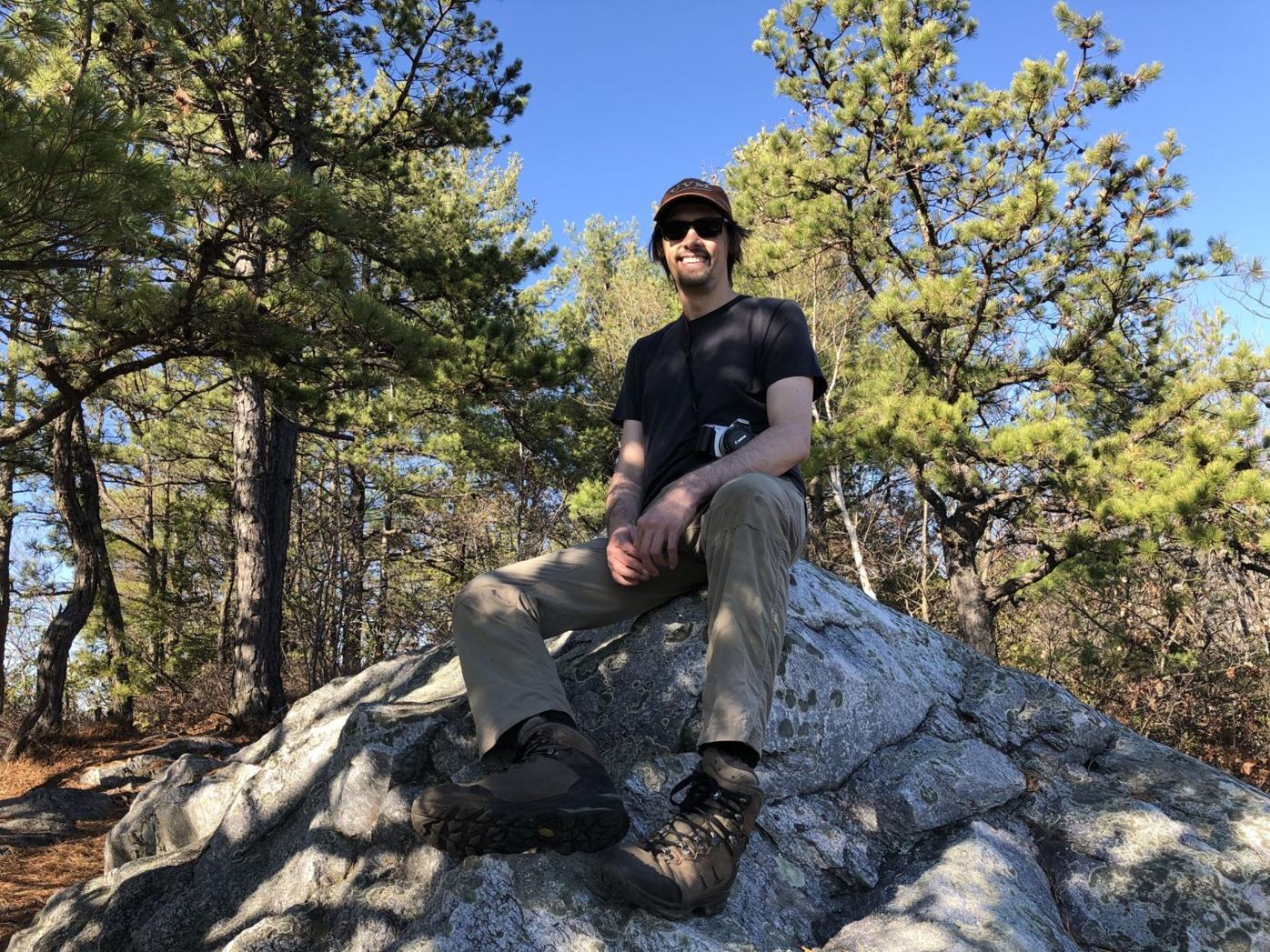 Antioch University graduate student Kyle Bradford, in one of the dry oak-pine barrens habitats where he is studying ant populations. 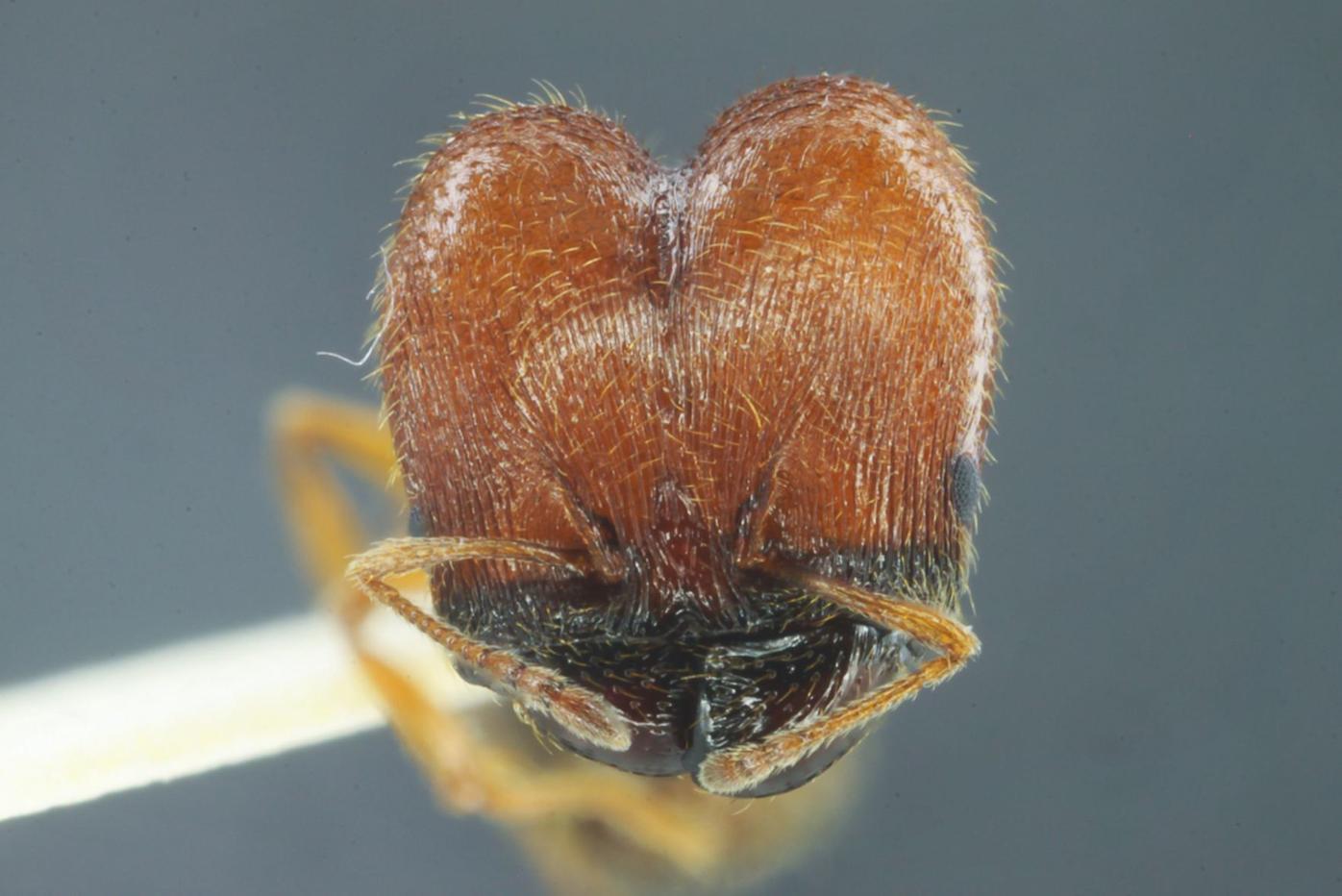 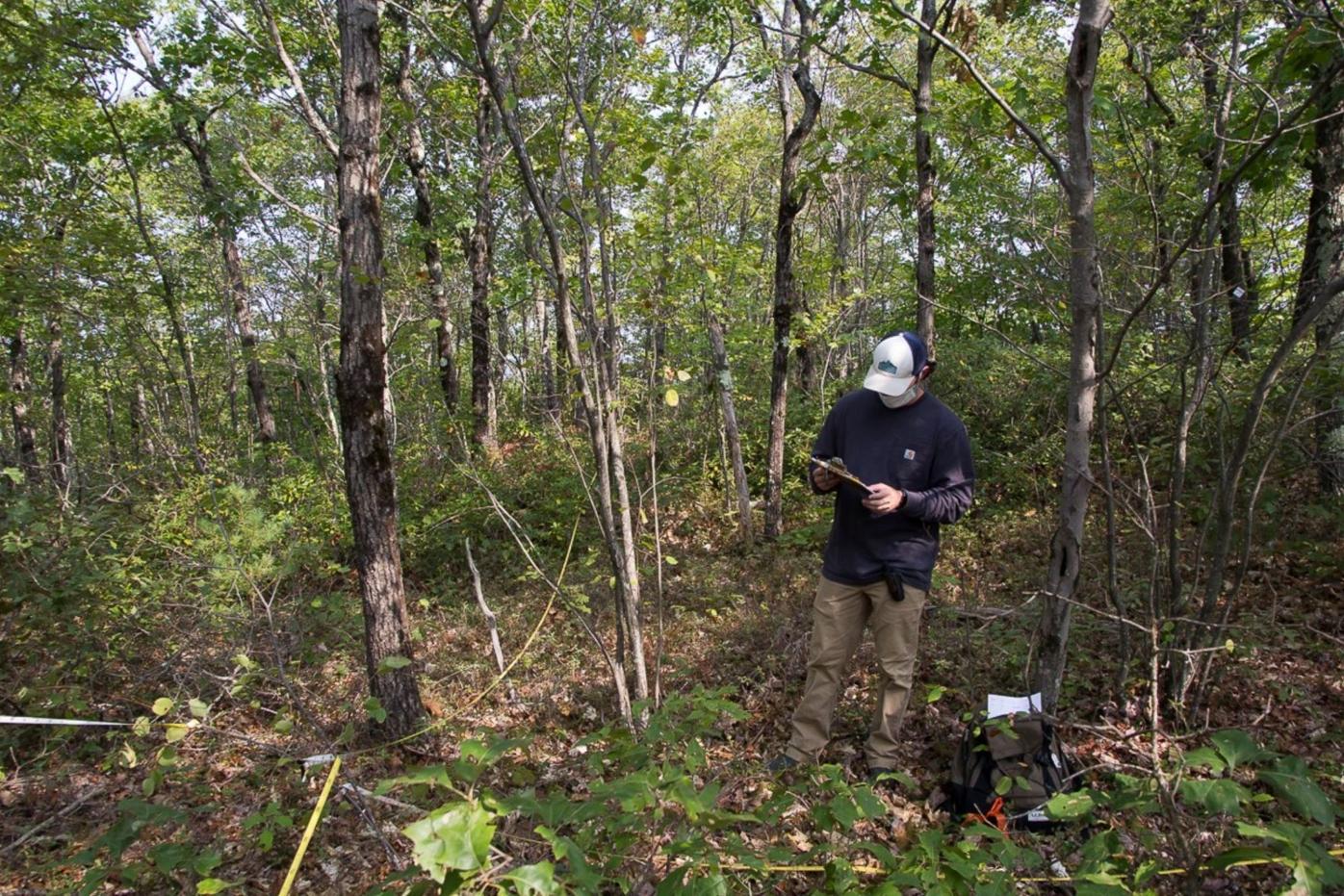 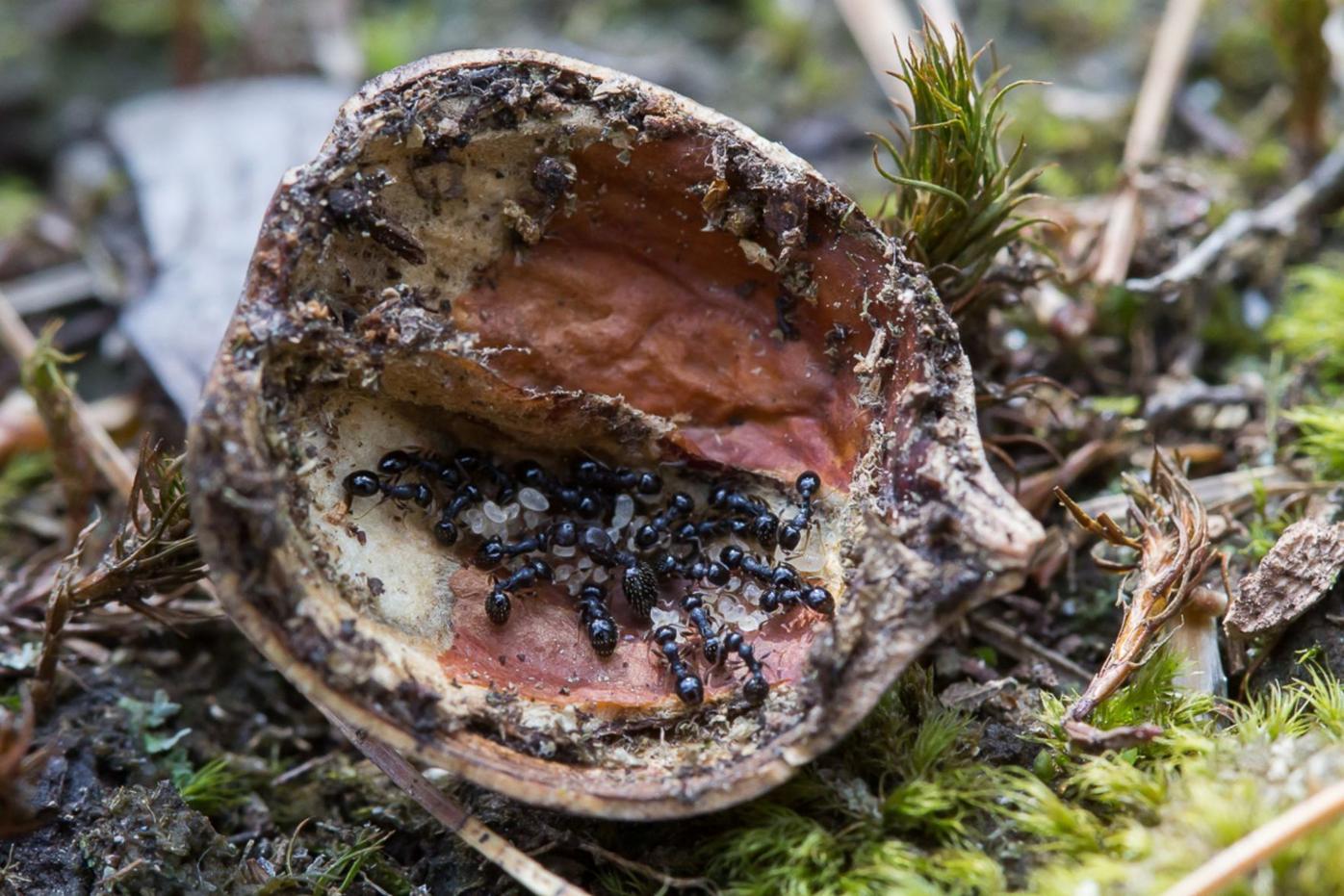 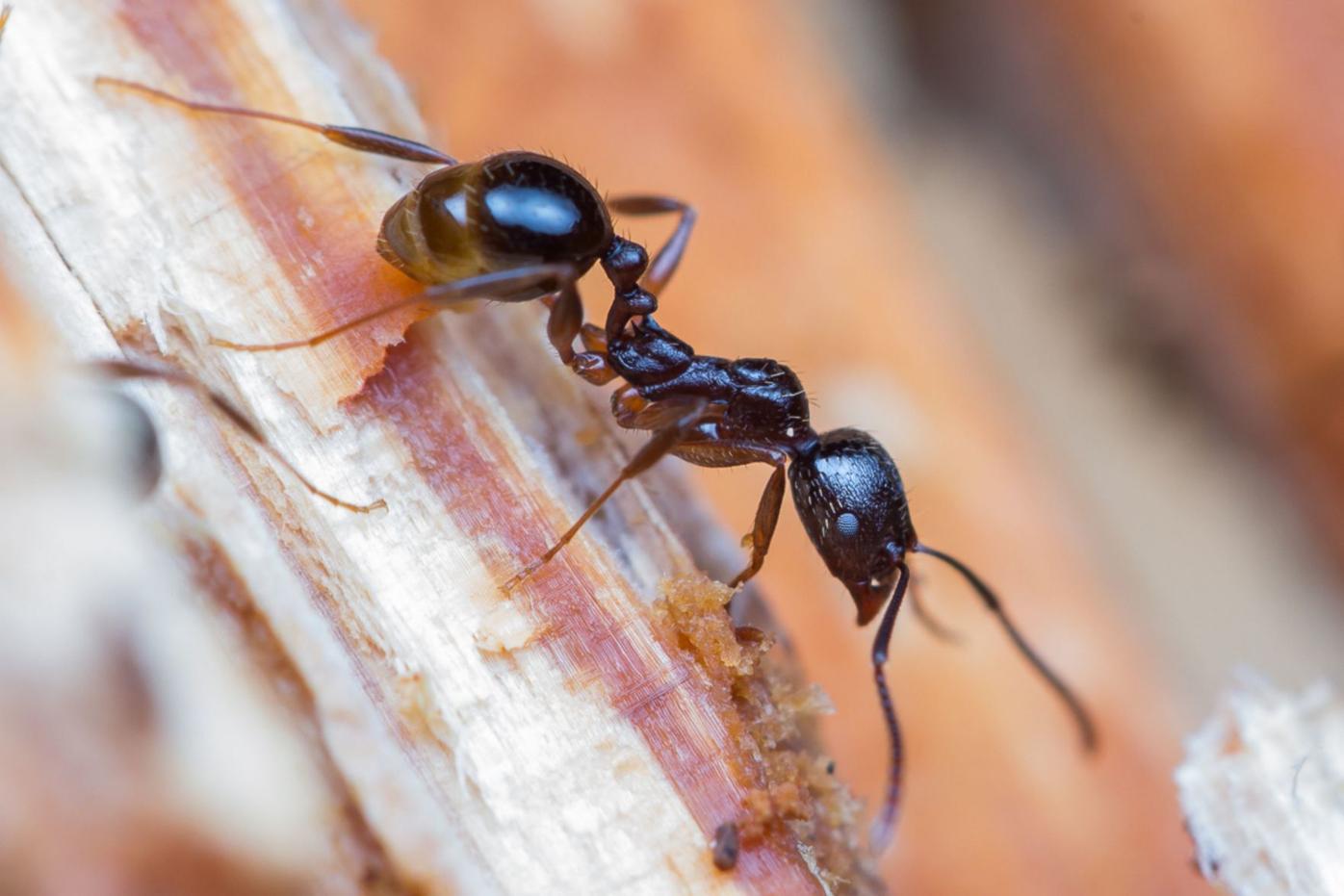 The winnow ant (Aphaenogaster rudis) is a common woodland ant in our region, and an important seed disperser. 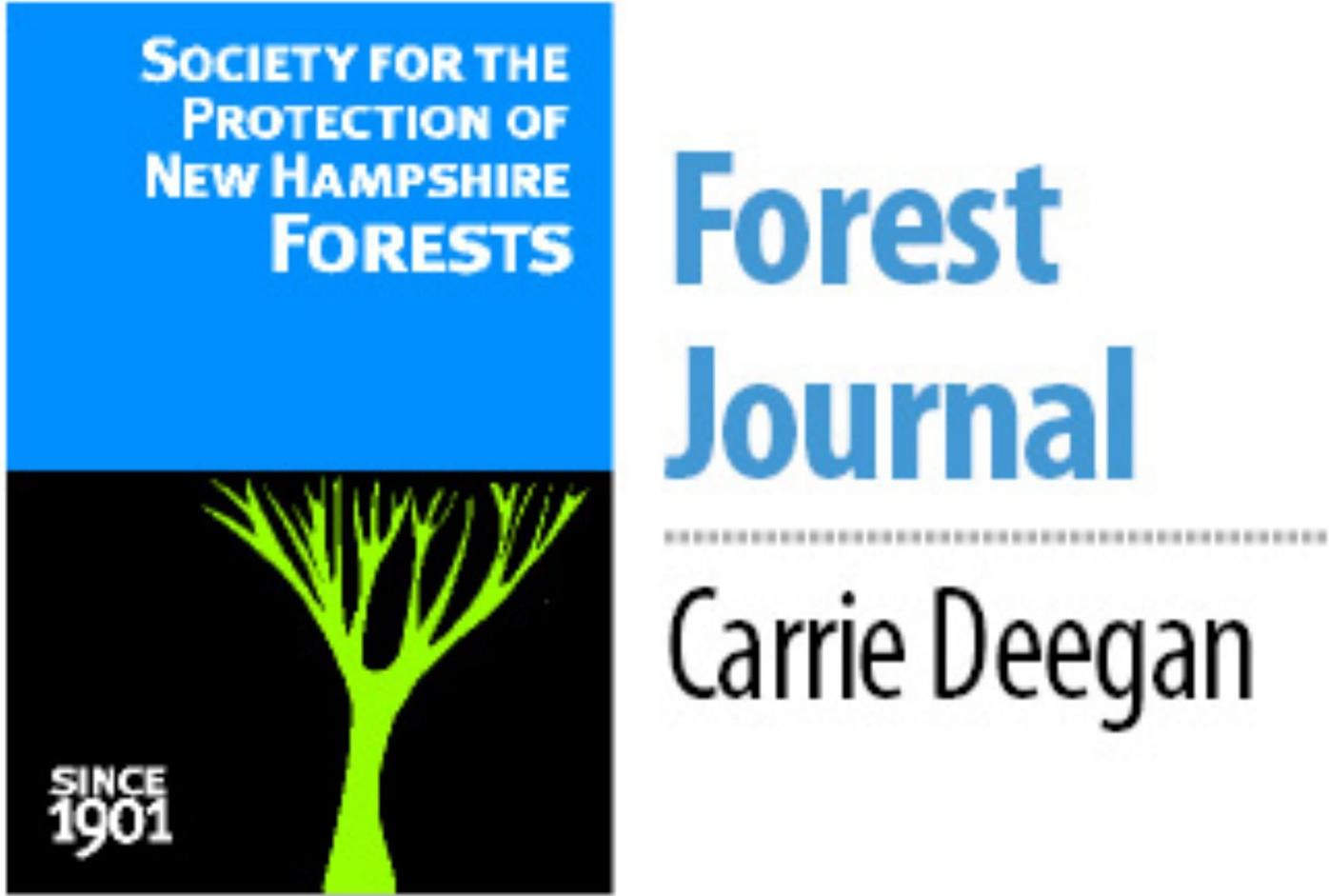 Antioch University graduate student Kyle Bradford, in one of the dry oak-pine barrens habitats where he is studying ant populations.

The winnow ant (Aphaenogaster rudis) is a common woodland ant in our region, and an important seed disperser.

Everyone knows what an ant looks like. At this time of year, you might catch one wandering along the planks of your wooden deck, or notice a line of them marching across your kitchen counter, headed for the fruit bowl.

“Look! Ants!” you say, a bit of dread rising in your throat. It’s usually not a good sign as a homeowner, but there are thousands of species of ants across the globe and only a few of them regularly tangle with humans.

In New England, there are roughly 140 species of ants known to science, and they inhabit almost every terrestrial habitat you can think of, from forests to mountaintops, swamps and bogs to old pastures. Because they are so ubiquitous and so numerous — colonies of some species can easily have several thousand individuals — ants play a significant role in many ecosystems.

Kyle Bradford, a graduate student at Antioch University of New England (AUNE) in Keene, is interested in looking at ants as indicators of ecosystem health and resiliency.

“Ants are keystone species in many habitats,” explains Bradford. “They can affect plant distribution and abundance by consuming or moving seeds, turn and aerate the soil during nest building, and they are masters at finding and devouring dead insects. They also provide food for many woodland animals, from woodpeckers to black bears.

Ants are even responsible for the spread of several of our treasured spring wildflowers like painted trilliums, bloodroot, and violets. These flowers all produce seed with a lipid-rich attachment called an elaiosome that ants can’t resist. They carry the seeds back to their nests and feed the fatty elaiosomes to their larvae, leaving the seed to sprout in a new location.

Bradford and his faculty advisor, Michael Akresh, are currently studying the ant communities that inhabit dry oak-pine barrens and heathlands, a globally imperiled habitat type. Oak-pine barrens and heathlands are fire-dependent natural communities, requiring disturbance in order to keep other plant and tree species from invading and overwhelming them.

In New Hampshire, barrens and heathlands are split into several natural communities found in very specific locations, including barrens in Ossipee and Concord and dry, rocky ridges in the southern part of the state.

Government agencies and conservation landowners are increasingly interested in restoring these habitats where they have gone “past prime,” by manufacturing controlled disturbances such as prescribed burns, selective timber harvests or targeted herbicide applications. Bradford is hoping the presence or absence of certain ant species may ultimately help land managers understand whether their restoration efforts in these habitats have been successful.

The first step in determining whether ants could be useful in gauging the health and quality of heathland habitats is creating a baseline inventory of which ant species are associated with regional oak-pine barrens and heathlands in the first place.

At the Forest Society’s Madame Sherri Forest in Chesterfield, one of 18 study sites in the region, Bradford and field technician Ryan Eagleson crawl around on their hands and knees within a 75-square-meter plot overturning rocks and investigating old logs and chunks of downed wood, looking for ant nests. Using this method of “hand sampling,” they’ll have a set amount of time to locate as many nests as they can, collecting three to five worker ants per colony, plus samples of any random foraging ants they find outside of nests. Individual ants are picked up between the thumb and forefinger and dropped into a small vial of 70% ethanol for preservation.

“You basically just pinch a leg to pick them up,” Bradford says.

I imagine the researchers being swarmed with angry, crawling ants from every disturbed nest, but he insists he’s never been stung or bitten while sampling. “At least not hard enough to break skin,” he adds cheerily.

When the sampling is complete, the preserved ants need to be identified under a dissecting microscope. This is the fun part, according to Bradford. “If you ever have a chance to look at ants under a microscope, they are really beautiful and many are just bizarre looking. Some have spines on the thorax, strangely shaped or huge heads that seem ridiculously oversized for their bodies, tiny beady eyes, or thick spoonlike hairs sprouting from them. It’s almost like a science fiction movie.”

From the 77 ants collected on two Madame Sherri Forest plots, Bradford has identified 10 species, four of which are the first recorded for Cheshire County. He’s quick to point out that this isn’t an indication of the relative rarity of these species; rather, it’s evidence of a lack of previous sampling in the state. In nearby Massachusetts, where most of Bradford’s other study sites are located, there are often 4,000 to 5,000 historical specimen records per county. Cheshire County had 106 records, and Bradford’s collections at Madame Sherri represent a 73% increase.

“If you want to contribute to scientific knowledge in New Hampshire, take pictures of ants and upload them to iNaturalist,” Bradford says enthusiastically. Scientists and amateur naturalists can help identify them, and with some counties reporting only a handful of historical samples, you may just document your own county record.

Perhaps unsurprisingly, there are no ant species found on the New Hampshire or the federal lists of endangered and threatened wildlife. “We just don’t have enough data to know what is state endangered, or federally endangered, for that matter,” explains Bradford.

There are a few New England ant species on the global International Union for Conservation of Nature (IUCN) Red List, and all of them have one thing in common: they’re all “parasitic” ants.

Parasitic ants take the complex social and colonial organization seen in normal ant species one step further, by requisitioning other ants and ant colonies to support their own. Some parasitic species never produce any of their own worker ants, and others need to constantly kidnap workers from other colonies to tend and feed their larvae and queen. Some simply kill off the queen of an existing colony and install their own queen to lay eggs, so that the entire colony is raising imposter larvae.

As they mature, parasitic workers mingle with their unwitting hosts until, after several generations, the colony transitions entirely to the parasitic species. One of the species identified at Madame Sherri Forest, Formica exsectoides (the Allegheny mound ant) is a local example of these queen-supplanting parasites.

Diabolical lifestyle strategies may not win parasitic ants any human sympathy, but because they can’t exist without the presence of other healthy ant colonies, parasitic ants may be more susceptible than other species to changes and degradation in their environment. This is what is most interesting to Bradford, and he is paying particular attention to parasitic ant species in his own research to see if their presence may be a good indicator of ecosystem integrity.

Perhaps someday, these ants could be the key to helping us understand what constitutes a healthy pine-oak barren or heathland.

“I love ants,” Bradford muses, “but mostly I love thinking about ants as a way to answer interesting ecological questions.”

Carrie Deegan is Reservation Stewardship & Engagement Director for the Society for the Protection of New Hampshire Forests. Contact her at cdeegan@forestsociety.org.