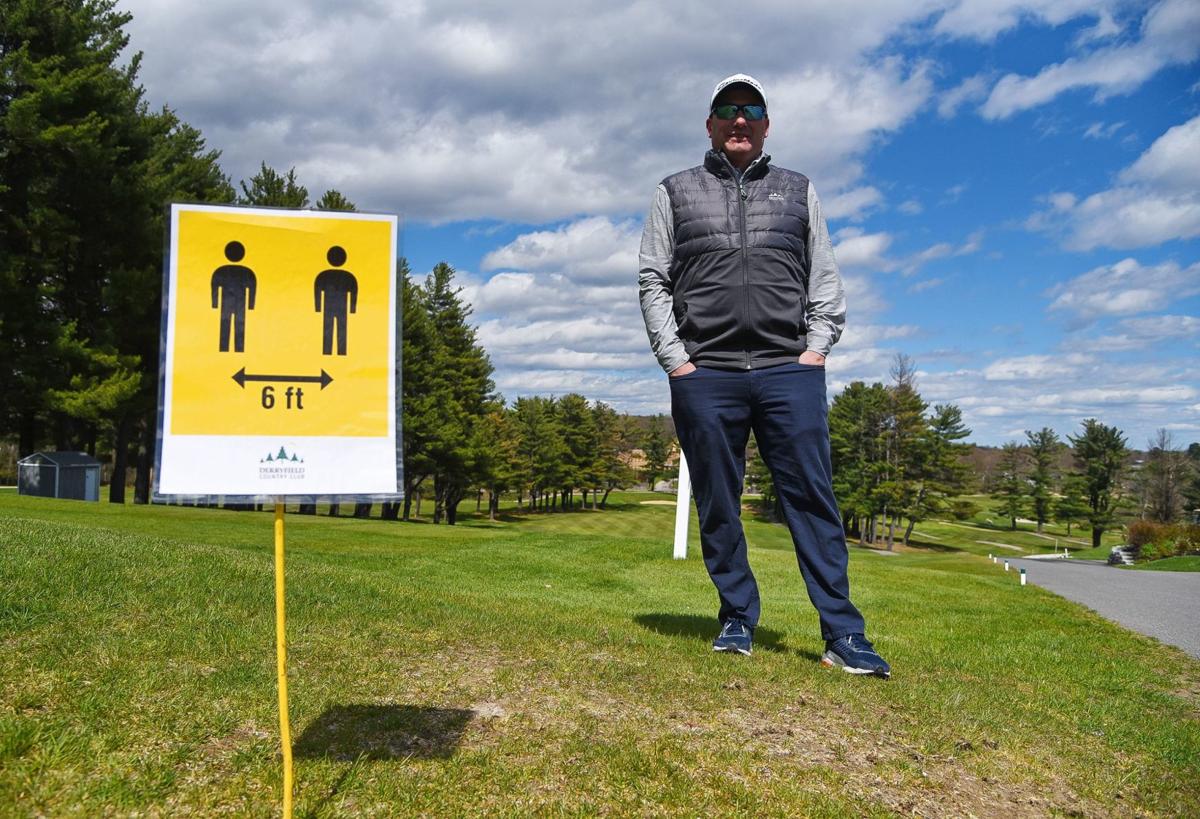 Derryfield Country Club pro Corey Manfield stands by one of the many signs put on the course in preparation for Monday’s opening day. 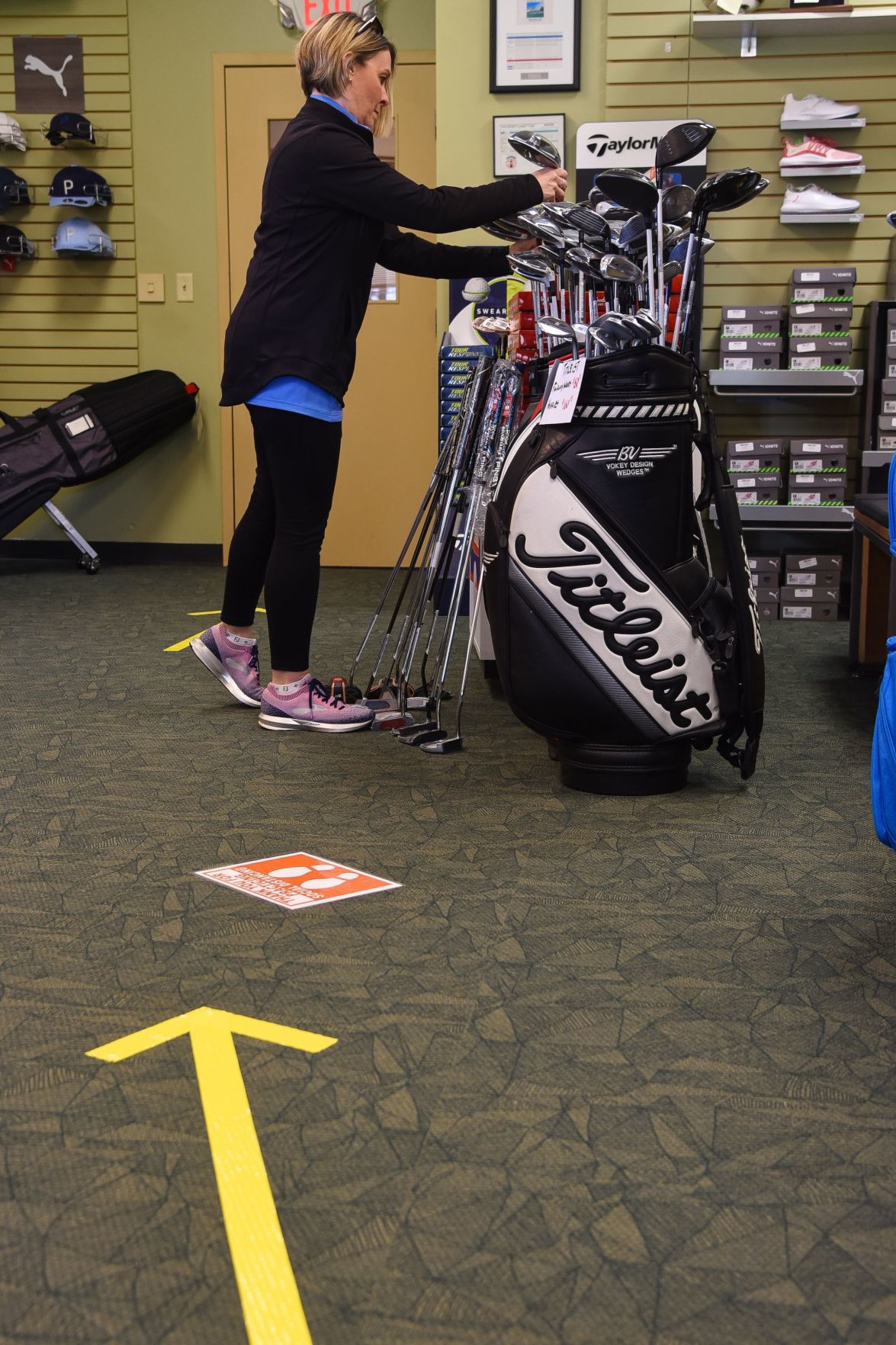 One-way enter and exit arrows are clearly marked as Jennifer Manfield gets the pro shop ready for Monday’s opening day at the Derryfield Country Club in Manchester on Sunday.

Derryfield Country Club pro Corey Manfield stands by one of the many signs put on the course in preparation for Monday’s opening day.

One-way enter and exit arrows are clearly marked as Jennifer Manfield gets the pro shop ready for Monday’s opening day at the Derryfield Country Club in Manchester on Sunday.

MANCHESTER — After two long months, Granite State golfers are ready to finally tee it up for the first round of the 2020 season.

Golf courses were among the businesses allowed to reopen Monday under the revised health emergency restrictions issued by Gov. Chris Sununu earlier this month.

“The phone hasn’t stopped ringing, essentially since the governor made that announcement,” said Cory Mansfield, golf pro at Derryfield Country Club in Manchester.

Mansfield was on the course Sunday afternoon doing some final preparations for Monday, placing signs around the first tee area reminding golfers to maintain six feet of distance with other golfers to maintain social distancing caveats, which are part of the reopening process.

“It’s going to be a challenge for the first month or two,” Mansfield said. “This is new for all of us. We’re going to evolve with it as much as we can and make it work for everybody.”

Golfers will notice other changes under Sununu’s “Stay at Home 2.0,” which he announced May 1 as the state’s first phase toward reopening during the coronavirus pandemic.

Among the new rules and restrictions, carts will be limited to one person or two people from the same household. Everybody who can walk the course will be encouraged to do so, allowing for more carts to be available as needed, Mansfield said. The practice putting greens are also off-limits for the time being as are driving ranges, so warming up for that first round will be a little different.

To keep people from touching the flag stick on the green, Mansfield said Derryfield is modifying the cups with a piece of foam that will prevent the ball from dropping all the way into the hole.

“Some courses are actually raising the cup out of the ground, so you hit the cup and it bounces away but we like the pool noodle (foam),” said Mansfield, who was being assisted Sunday by his wife, Jennifer. “You’ll be able to watch your ball fall into the hole. That will be more like real golf. But I think everybody’s just anxious to get out and play. It will be fun seeing everybody.”

Shaking hands after the round is also out and tee times have been reduced from every nine minutes to every 12 minutes, allowing groups more time to finish up a hole and ease congestion on the course.

“People are just so anxious to get outside and play,” Jennifer Mansfield said.

Clubhouse access will also be limited and public areas are well marked with direction arrows and social distancing reminders.

Cory Mansfield said tee times are required and can be booked and paid for over the phone or online. Upon arrival, golfers will be asked to wait in their cars until the starter, who will register each group online, calls them to the first tee.

And there is no “19th hole” after a round. Mansfield said the Derryfield lounge will remain closed during the opening week and food from the restaurant will still be take-out only, although outdoor seating is scheduled to open next Monday.

Mansfield said he conducted a “walk-through” with city officials last week, showing the changes and preparations for the municipally-owned course to reopen under the relaxed guidelines Sununu announced the previous week.

“I know why he held us back and I agree with it. It was tough to do but hopefully it works out for everybody,” he said.

Derryfield was scheduled to open for the season on March 17, but the COVID-19 crisis put it on hold as Sununu issued a limit on non-essential businesses throughout the state in order to prevent the spread of the illness.

Not quite two months later, Mansfield said the Derryfield course has had extra time to get into playing shape without the usual wear and tear of golfing through the spring rainy season.

“It’s in great shape. Members will be pleased by how good it looks,” Mansfield said.

Although Monday’s forecast didn’t look promising for opening day, Mansfield said tee times were booked solid until late in the afternoon and for much of the week.

Bill Conway of Manchester dropped by for a look at the course from his van in the parking lot, wishing the tee time he had booked for Tuesday would arrive sooner.