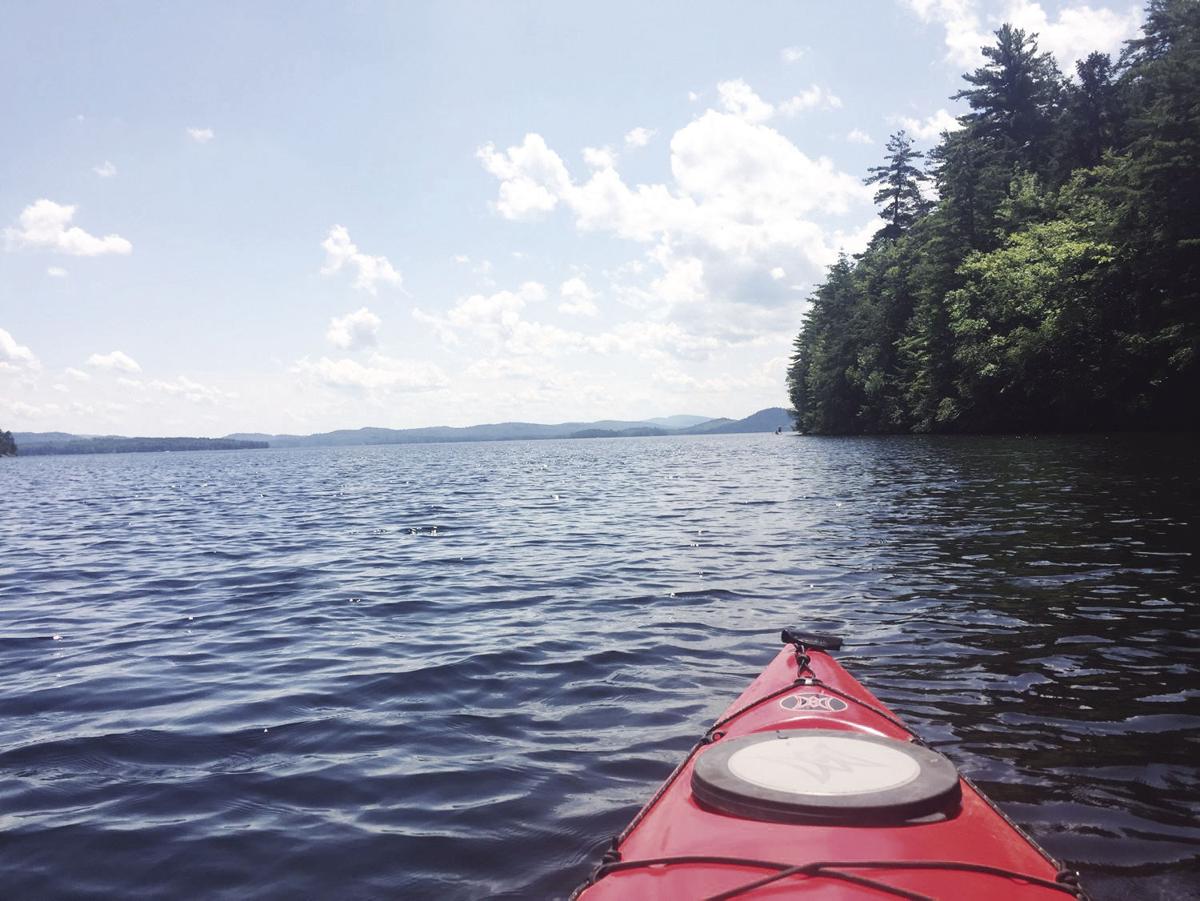 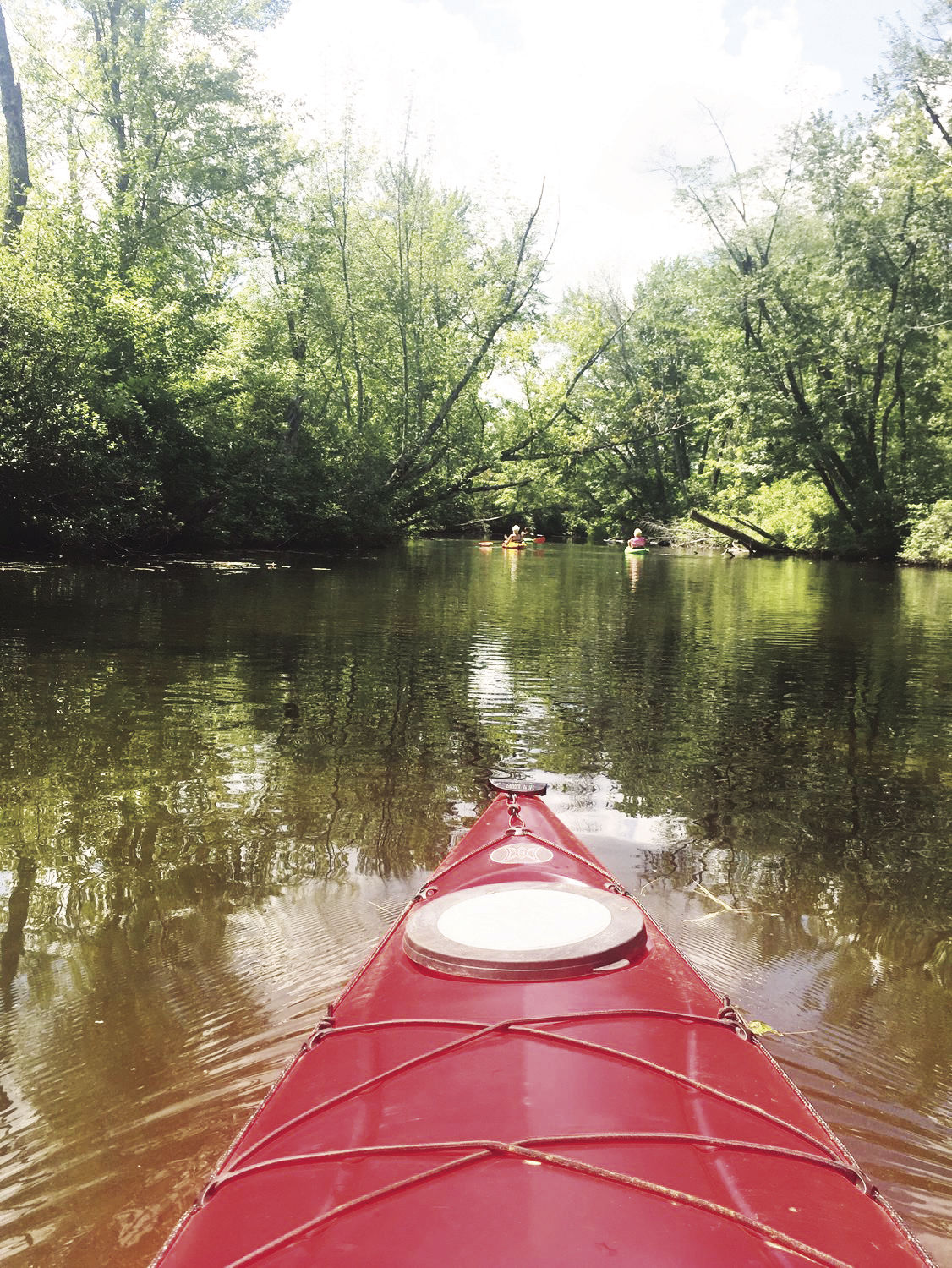 Kayakers make their way up the Cockermouth River in Hebron as they follow the Northern Newfound Water Trail.

Numbered placards posted along the shore mark the points of interest on the Northern Newfound Water Trail.

Kayakers make their way up the Cockermouth River in Hebron as they follow the Northern Newfound Water Trail.

Numbered placards posted along the shore mark the points of interest on the Northern Newfound Water Trail.

On the banks of the winding Cockermouth River, once-towering pine trees now bend nearly 90 degrees, their trunks almost horizontal over the water as their canopies still reach toward the sky.

In the water, the bare silver branches of other trees that long ago gave up their precarious hold on the riverbank still stretch skyward here and there, the rest of the tree forever submerged.

Meanwhile, the river flows gently toward Newfound Lake, which, even on a busy summer Saturday, is nothing more than a distant hum to paddlers making their way upstream. The songs of the birds flitting among the trees and bushes on the banks dominate over the far-away Mercurys and Evinrudes on the lake.

It can be hard to commune with nature on most of New Hampshire's big lakes. Big waterfront homes looming on the shore and ever bigger and faster boats buzzing around on the water can make it hard for a paddler to find any peace and quiet - or calm water.

But in Hebron, at the northern tip of beautiful Newfound Lake, there's a respite from all the hubub.

With three wildlife preserves and a lightly developed waterfront park in the area, land-based nature lovers have been able to get away from it all for years, thanks to the efforts of the Newfound Lake Region Association (NLRA) and New Hampshire Audubon.

And now, the two groups have given boaters the same opportunity, with the new Northern Newfound Water Trail.

I first learned about the trail when I spotted a calendar listing for the weekly group tours led by the staff at Audubon's Paradise Point Nature Center. I contacted Ian Cullison, Audubon's Newfound area director, who provided a map and filled me in on some of the details.

The NLRA was the driving force behind the water trail, a 14-station numbered route that takes paddlers along the lake's rocky shoreline, up the meandering Cockermouth River and into lush marshes. Birds - loons, bald eagles and belted kingfishers, among others - are the wildlife stars of the trail; they and the natural features highlighted all along the way make it easy to forget that you're on or around the fourth largest lake in the state.

Armed with Ian's map, I put my kayak on the car and headed for Hebron and my starting point, the NLRA's Grey Rocks Natural Area. The launching ramp (non-motorized boats only) is a short carry from the parking lot, and there's a picnic table and portable john for your convenience before or after your trip. From the put-in, it's a short paddle down a quiet channel that's pretty in its own right, but is just a taste of what's to come.

The channel opens up into the Cockermouth River delta, where you have the choice of heading up the river or out onto the lake. At the delta, you're just about at the midpoint of the numbered points on the water trail, so it really doesn't matter which way you go first.

We chose the river first, and paddled about a mile and a half up the winding stream. The water is crystal clear - as it is all around Newfound, billed as one of the cleanest lakes in the state if not the world. We had to dodge a few dead trees and low branches, but the paddling was easy and the trip was a serene, relaxing experience. We went as far upstream as we could, turning around when we encountered a dead tree that we would have had to portage around.

Back at the delta, it was time to head out onto the lake. Taking a left past the Hebron town beach, the water is clear, cool and shallow. Past the beach, there are a few homes, including a huge mansion under construction at the top of a granite cliff that, ironically, is one of the points on the nature trail. After that, the shoreline is undeveloped, part of the Audubon preserve. Be on the lookout for bald eagles.

Paddling around the blueberry-laden Paradise Point brings you to the Audubon center's landing. In addition to guided tours of the water trail, the center offers kayak and paddle board rentals. (You can put your own boat in the water there as well, but it's a long and precipitous carry from the parking area down to the waterfront. Grey Rocks, just down the road, is a much easier launching point.)

On the way back to the delta and to Grey Rocks, we spent some time experimenting with handling our kayaks in the swells kicked up by the Saturday afternoon boat traffic. There were no tsunamis, but it was good practice for kayakers who do most of their paddling on flat water.

In all, we spent about 2 1/2 hours on the water and covered about 5 1/2 miles. The only disappointing part of the experience is that there's technically no good place to stop for a swim. (The Hebron beach is for residents only). But when you're done paddling, the huge swimming beach at Wellington State Park is just a few minutes down the lake by car.

For a map of the Northern Newfound Water Trail, visit tinyurl.com/nnwtrail. For more information about Newfound Lake and its natural resources, visit the NLRA at newfoundlake.org, or learn more about the three Audubon preserves at nhaudubon.org/about/centers/newfound.

Brochures with maps of the are available at the kiosk at Grey Rocks or at Audubon's Paradise Point Nature Center, both on North Shore Road. The nature center (phone 744-3516), with its wildlife displays and table-sized 3-D map of the lake and vicinity, is worth a visit while you're in the area, whether you're renting a boat there or not.

Tom Lynch writes occasionally about his adventures on the water in New Hampshire. Ideas are welcome at ulonthewater@gmail.com.