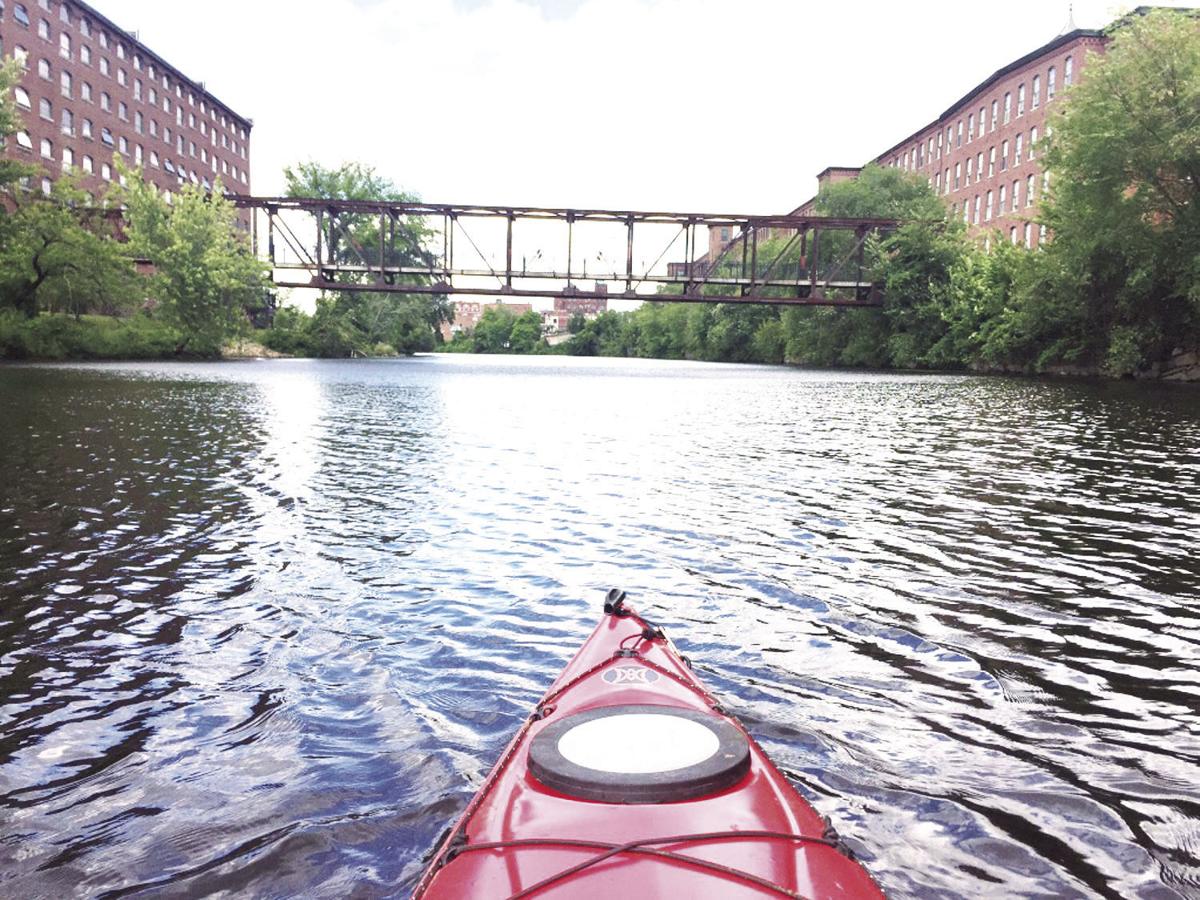 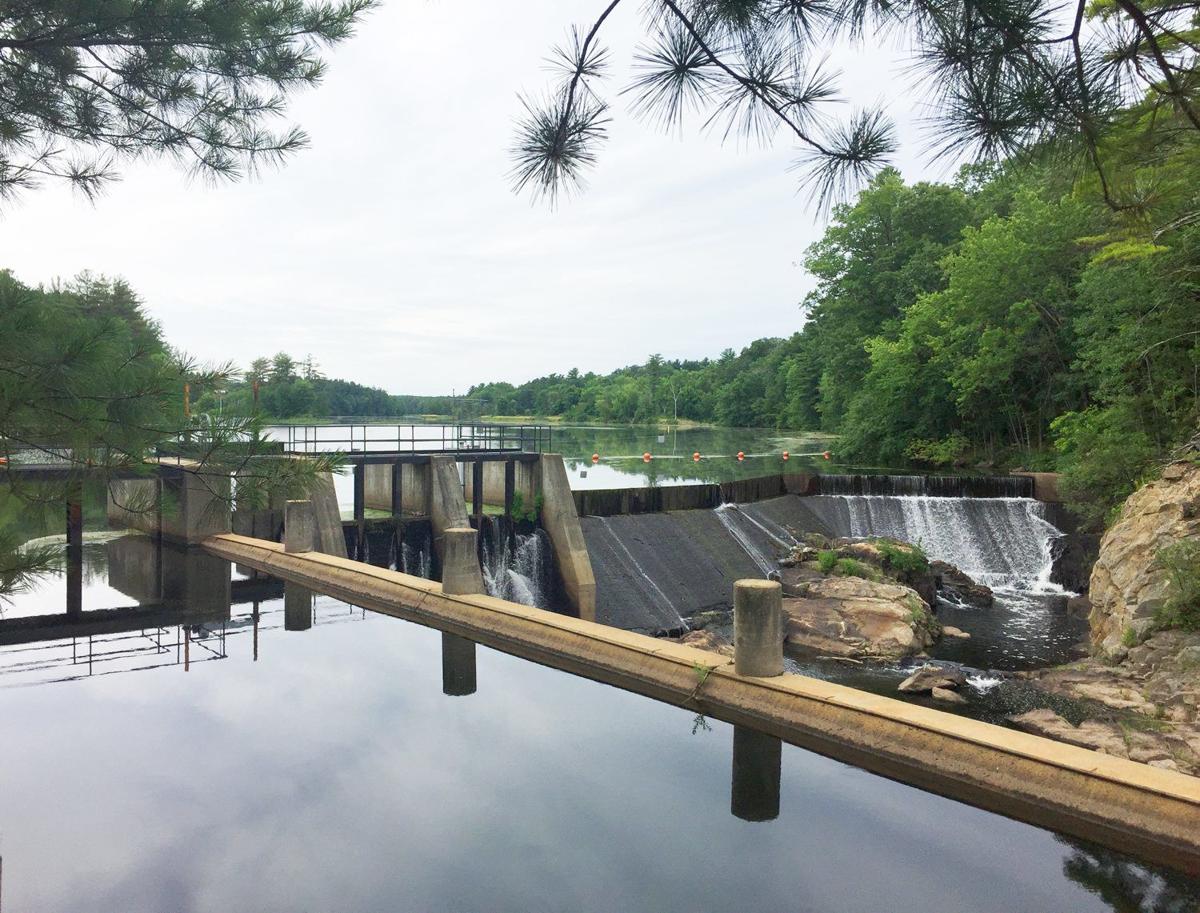 The Mine Falls hydroelectric dam divides the Nashua River. Upstream of the dam, the river seems more like a lake.

The Mine Falls hydroelectric dam divides the Nashua River. Upstream of the dam, the river seems more like a lake.

NASHUA -- If there's another major river in New Hampshire that's as paddler-friendly and has as much variety of scenery as the Nashua River, I'm looking forward to trying it.

Over the course of 7 or so miles through the Gate City, paddlers on the Nashua River can find themselves in wide open spaces, in a tree-lined winding stream, and in the brick-walled canyons of downtown. And unless you're directly below one of the dams, the current is rarely strong enough to make paddling upstream a problem.

The river, which divides the Gate City into north and south, flows for most of its 37-mile length in Massachusetts. It enters New Hampshire in Hollis, riffles its way over boulders and under Route 111 before eventually entering its namesake city and flowing into the Merrimack River east of downtown Nashua.

Our first trip on the Nashua was upstream of the Mine Falls hydroelectric dam. Launching your kayak or canoe is easy at the city-owned ramp just above the dam. (Launching your 125-horsepower bass boat is easy there, too - you'll see a few of them on this stretch of river.) The ramp is located at the entrance to Mine Falls Park near Stellos Stadium, just off Exit 5W of the F.E. Everett Turnpike. There's plenty of parking nearby.

Paddling upstream from the dam, you're immediately in the widest part of the river. It's almost like a lake, aside from the gentle current. The main channel is wide and the paddling is easy. The biggest obstacle at the sides of the channel is the aquatic weeds that have been an increasing problem on the Nashua. (Be sure to wash down your boat when you get home to prevent carrying the weeds to your next paddling destination.)

For the most part, the river banks are undeveloped, though there are occasional homes and, further upstream, a mobile home park or two, and still further, some rolling farms and estates in Hollis. There are small islands along the sides of the river, but paddling the back channels can often lead to marshy dead ends.

Fishing is good in this stretch of the river, with plenty of downed trees and other structures to give some substantial bass places to hide and hunt. Birdwatching is great, too.

We paddled about 3 1/2 miles upstream, by which point the river had narrowed, allowing the trees to form a canopy over the water to provide some welcome shade. We went as far as the Overlook Golf Club in Hollis, where I spent a few minutes searching the river bottom along the shore for stray golf balls (I found five) before turning around and heading back downstream.

While you can always pull to the shore and wade to stretch your legs, we found ourselves wishing for a beach or grassy bank to stop for a swim or a picnic somewhere along the way.

For our second trip along the Nashua, we wanted to explore the area downstream of Mine Falls. We had hoped to find an easy put-in near the dam, but there are few spots with gently sloping banks, and reaching them would have required a long carry from the nearest parking area.

As we were scouting put-in spots one Saturday afternoon in Mine Falls Park, a passing dog walker told us to check further downstream, off the Broad Street Parkway, where he said the banks were low and open.

He was right. and then some. Near the downtown end of the parkway is the Millyard Technology Park, a beautifully renovated mill building turned office complex with a huge parking lot along the river in back. Not only is the riverbank put-in friendly, there's actually a gravel launching ramp, owned by the developer but accessible to the public. (There's a kiosk with waiver forms you're asked to fill out before using the ramp for the first time.)

From this spot, paddling upstream takes you on a winding, tree-lined tour of a largely natural shoreline, making it easy to forget you're in the state's second largest city - at least until you reach the Everett Turnpike in about 2 miles.

Downstream of the put-in, though, there's no mistaking the fact that you're in the heart of an old mill city. You're passing under bridges and paddling along banks that are more often lined with granite foundations and five- or six-story brick walls than with rocks and bushes. Paddling through the millyard was fascinating and, for some reason, just a bit intimidating - though the north bank is a little more paddler friendly than the solid-walled south.

Beyond the millyard is downtown Nashua. There are few (if any) places to beach your boat between the office-park launch ramp and the next downstream dam at Jackson Falls east of Main Street, but the city is hoping to change that. Riverfront access is a big part of redevelopment projects currently being considered. (There's a cool animation of the proposals at http://tinyurl.com/nashrivdev.) The concept of being able to paddle into town, stop for lunch or a drink and then paddle back to the car seems like it would be pretty popular.

Below the Jackson Falls Dam, the river winds for another tree-lined urban mile and a quarter before emptying into the Merrimack. Access points are harder to find in this stretch, and we haven't explored it. Besides, we think we've already seen the Nashua River at its best.

Tom Lynch writes occasionally about his explorations on the water in New Hampshire. Ideas are welcome at ulonthewater@gmail.com.