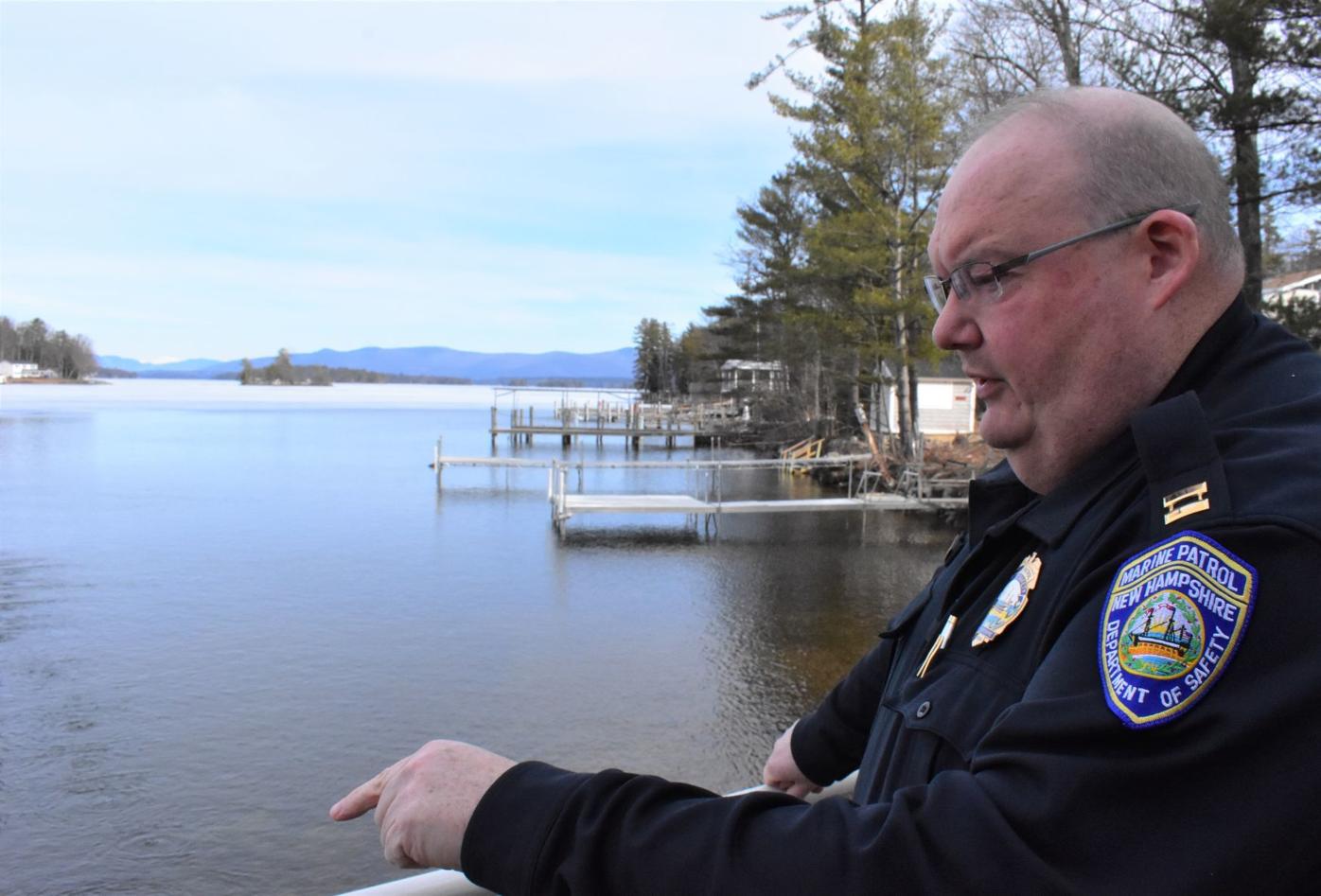 N.H. Marine Patrol Capt. Tim Dunleavy points to the aqua-therm that keeps the water circulating around the agency’s docks to prevent ice from forming and causing structural damage. New regulations prohibit creating open water in front of private property other than your own during the winter. 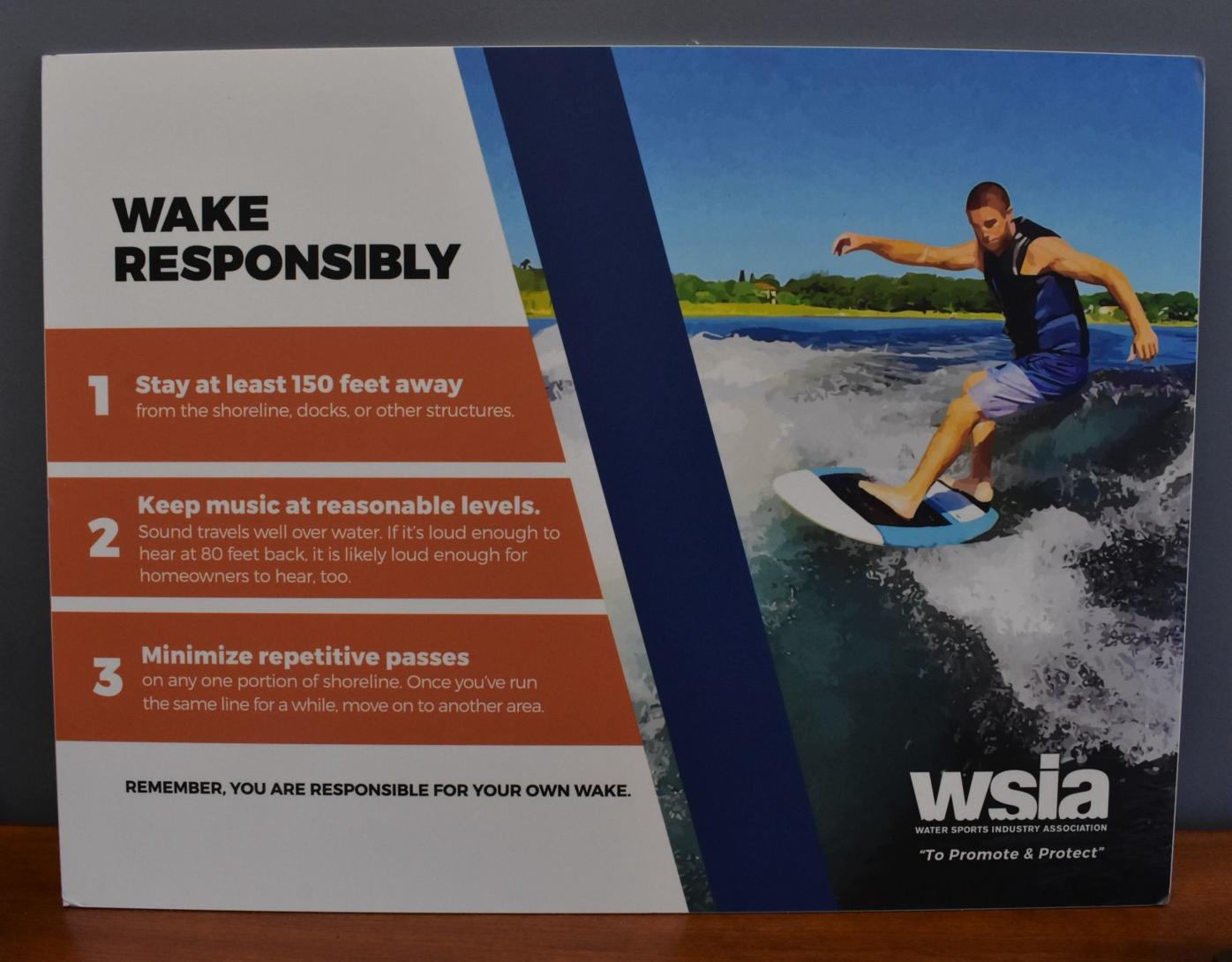 A poster produced by the Water Sports Industry Association advocates for self-regulation to protect wake surfing that has become the rage on the state's water bodies in recent years, according to N.H. Marine Patrol. 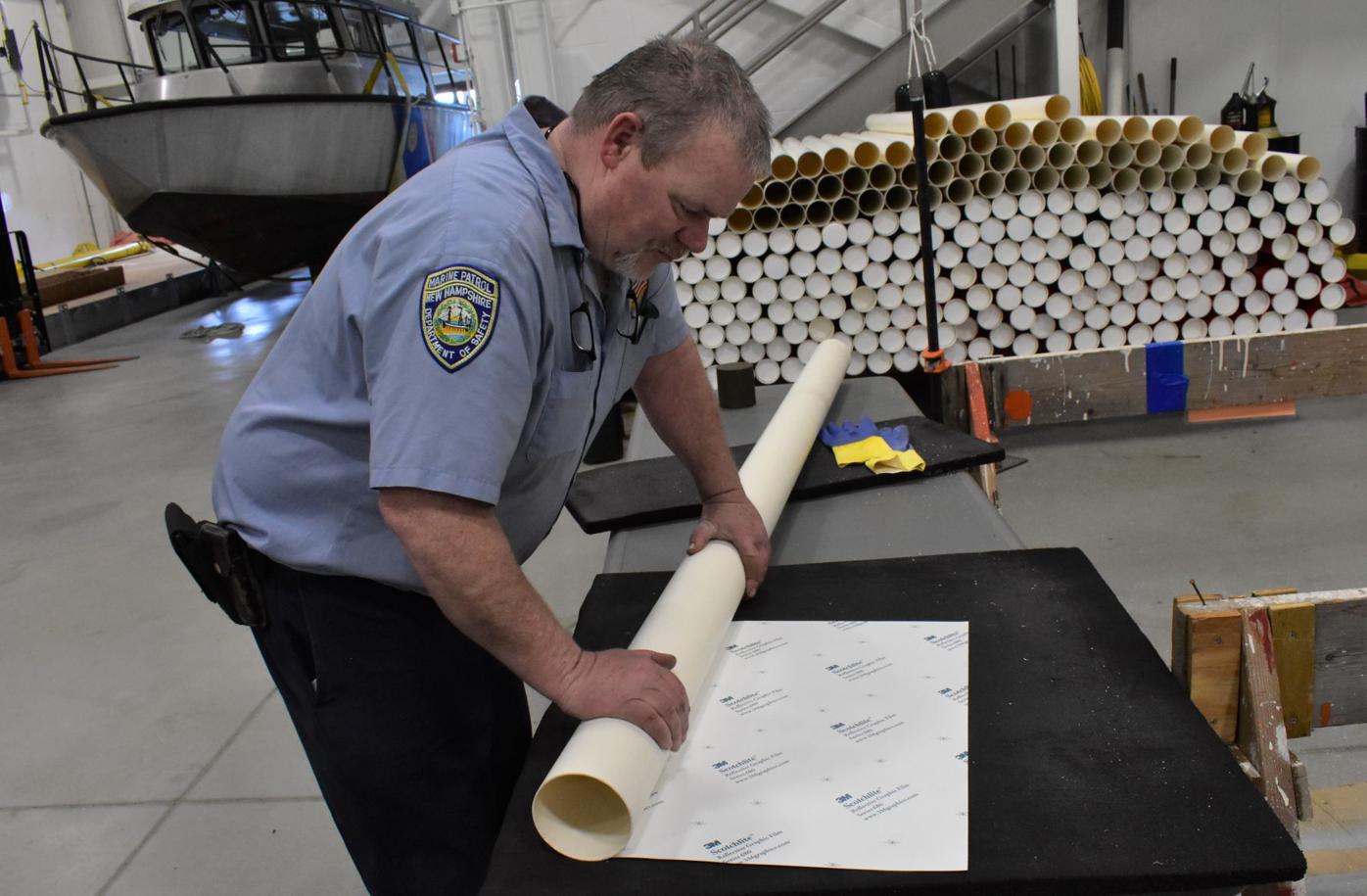 N.H. Marine Patrol Capt. Tim Dunleavy points to the aqua-therm that keeps the water circulating around the agency’s docks to prevent ice from forming and causing structural damage. New regulations prohibit creating open water in front of private property other than your own during the winter.

A poster produced by the Water Sports Industry Association advocates for self-regulation to protect wake surfing that has become the rage on the state's water bodies in recent years, according to N.H. Marine Patrol.

GILFORD — A popular new water sport is making waves on the state’s lakes over environmental and safety concerns.

Wake boats can gulp down water ballast — up to two tons of water weight in some models — and jet it back out, creating large waves right off the stern that wake surfers can ride without being towed.

The sport has earned fans and made enemies alike. Proponents say the much higher wake creates the sensation of floating one minute and flying the next — the boating equivalent of snowboarding. Along with a worldwide surge in popularity have come major economic benefits.

Detractors assert that the higher wakes erode shorelines and create a hazard for paddle boats, swimmers and moored vessels, as well as spread invasive species, including nuisance aquatic weeds like milfoil.

Concerns are serious enough that the Legislature has formed a study committee to evaluate the watercraft’s impact.

Capt. Tim Dunleavy, of New Hampshire Marine Patrol, said interest in wake surfing has exploded over the past seven years, with almost every major boat manufacturer now producing a version with a proprietary system to shape wakes.

The wake is created by the displacement of water, he said. The heavier the boat, the bigger the wake. Some boats have hard ballast tanks for the water, some use soft bags, others have built-in floodable cavities in the boat’s stringer — or support — system. The boats are designed to fill up or empty their ballast in less than three minutes, using designated pumps for each tank – one to take in water, one to pump it out.

To carry the extra water ballast, horsepower on a 20-foot surf boat is substantially higher than a typical runabout, starting at about 250 horsepower.

Marine Patrol was scheduled to hold two boater safety information meetings later this month to increase public awareness about new regulations and hear public comment. Because of the coronavirus pandemic, the forums will be rescheduled, the patrol announced Monday.

The growing popularity of wake surfing has provoked owners of wake-averse craft, prompting the creation of the study commission.

The commission, which includes state officials, lakefront property owners and members of the water sports industry, was given a year to come up with findings and recommendations after HB 137 was signed into law by Gov. Chris Sununu in June.

Rep. Suzanne Smith of Grafton, was the primary sponsor of the bill, which garnered support from the Lakes Management Advisory Committee, a body charged with working on lake issues with the New Hampshire Department of Environmental Services and with New Hampshire Lakes, a Concord-based non-profit organization.

The commission’s charge is to gather the appropriate data and information on the positive and negative uses of wake boats, specifically regarding the spread of aquatic invasive species; the relationship to shoreline erosion and impacts to private property; the economic impact of recreational boating and the popularity of water sports among families in the state; and the safety of swimmers and other boaters. The commission is to report its findings by June 30.

Some have compared wake boat issues with those of personal watercraft 20 years ago, and the industry is stepping up to help. Last year, the Water Sport Industry Association (WSIA) began a campaign to educate wake boat user to operate at least 200 feet offshore, keep their music to reasonable levels and avoid making repetitive passes in the same area.

Capt. Dunleavy said the forums will bring Lakes Region boating stakeholders together to discuss the agency’s mission on the state’s public waters. In addition to boating safety, topics will include the enforcement of new aqua-therm restrictions, illegal rafting in regulated areas, boat speed in “No Wake” zones, and the safe passage rule.

“Both on the Seacoast and in the Lakes Region we’ve had some particular challenges in the past several years. Some are a lack of awareness of new regulations and some are challenges we are facing just due to a general change in boating practices,” Dunleavy said.

While in past years the common boating practice was to spend the day motoring around the lake, now people are more interested in looking to drop anchor, swim and recreate, a trend Dunleavy said impacts shorefront property owners. Last year, 97,960 boats were registered in the state.

Among other issues the agency has been dealing with, Dunleavy said, is the growing trend of people adorning the exterior of their boats with aftermarket LED lights. People mistakenly believe that more lights will increase their nighttime visibility when in fact they create such a glow that other boat operators are unable to spot their red and green navigational lights.

Issues on the Seacoast include habitat being impacted by personal water craft and the effects of boat wakes on shorefront property along the Piscataqua River. The low-drafting personal water craft, which can be operated in very shallow water, Dunleavy said, are disturbing tidal wetlands and marshes that serve as the spawning grounds and habitat for a variety of basic members of the food chain within that ecosystem.

HB 380, which remains pending, would prohibit operation of PWC within 300 feet of any marshland or flat of the Rye Estuary and New Castle Back Channel.

Shorefront erosion and other issues caused by wakes generated by the larger sport fishing boats that dock along the river that stretches into neighboring Maine are also among the challenges Marine Patrol is facing.

Other topics that the patrol to hear from the public on are new regulation regarding the use of aqua-therms, the devices that keep water circulating around permanent docks during the winter to prevent ice formation and resulting structural damage. Last year, Rep. David Huot, D-Laconia, sponsored legislation that has since become law, making it illegal to create open water in front of private property that is not your own.

Dunleavy said the regulation came in response to the practice of many seasonal property owners who turn on aqua-therms in December and don’t return to their property until March. Even if the devices are regulated by a timer or a thermostat, they can encroach on abutting property, preventing solid ice formation.

It is becoming increasingly common for property owners who have obtained a seasonal dock permit from the NHDES that allows the dock to remain in the water for just six months of the year, to leave them in year-round and protect them with an aqua-therm.

Marine Patrol will also speak about a 2019 proposal put forward by boater Joyce Endee to get a “lighthouse” on a notorious collection of rocks known as “The Witches” – off Timber Island on Lake Winnipesaukee. Dunleavy said the existing lighting configuration and red-and-black-topped spars will remain but the size of the warning signage will be increased.

Dunleavy said other topics will include rafting, the practice of tying no more than two boats together and anchoring offshore. Regulations require that rafting boats must be 150 feet offshore before dropping anchor, except for Braun Bay where anchoring 75 feet from shore is allowed. Rafting boats must remain 50 feet away from any other raft. Single boats that are anchored must remain 25 feet from each other in a rafting zone.