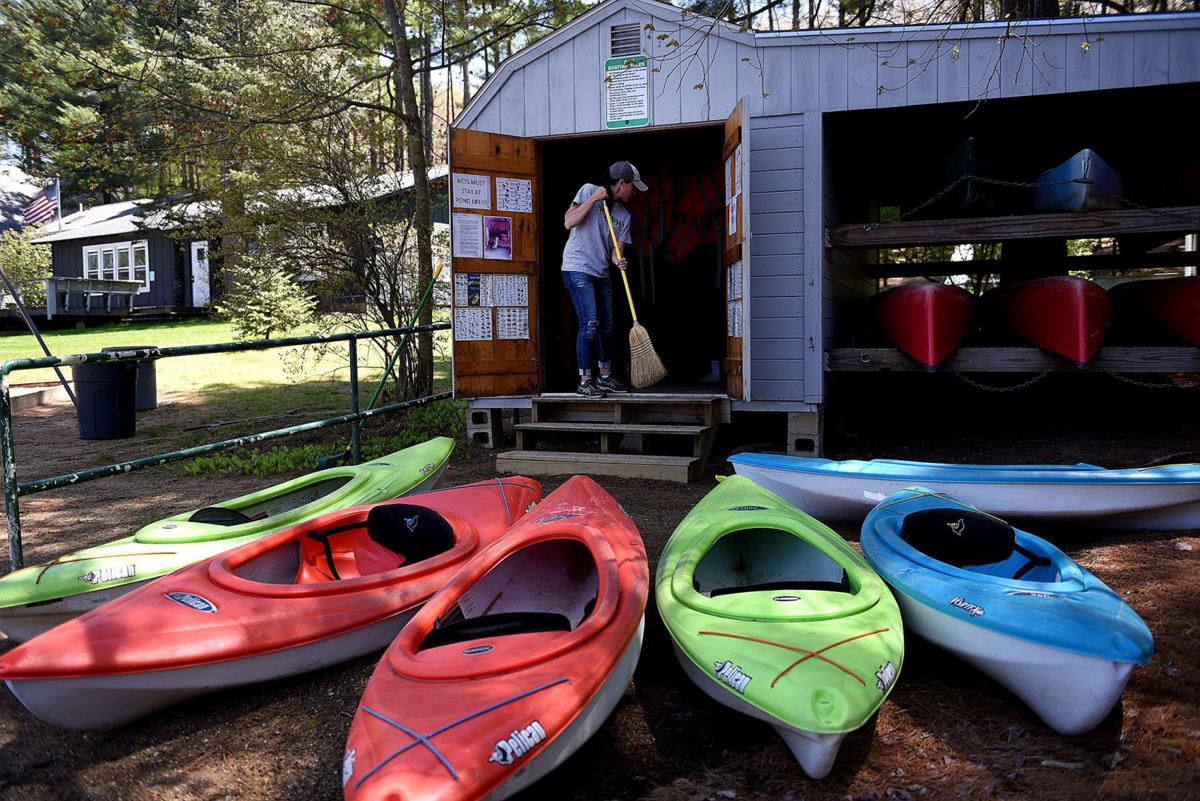 Owner Erika Connors of Melody Pines Day Camp sweeps out a boat house at her camp on Crystal Lake in Manchester on Thursday. 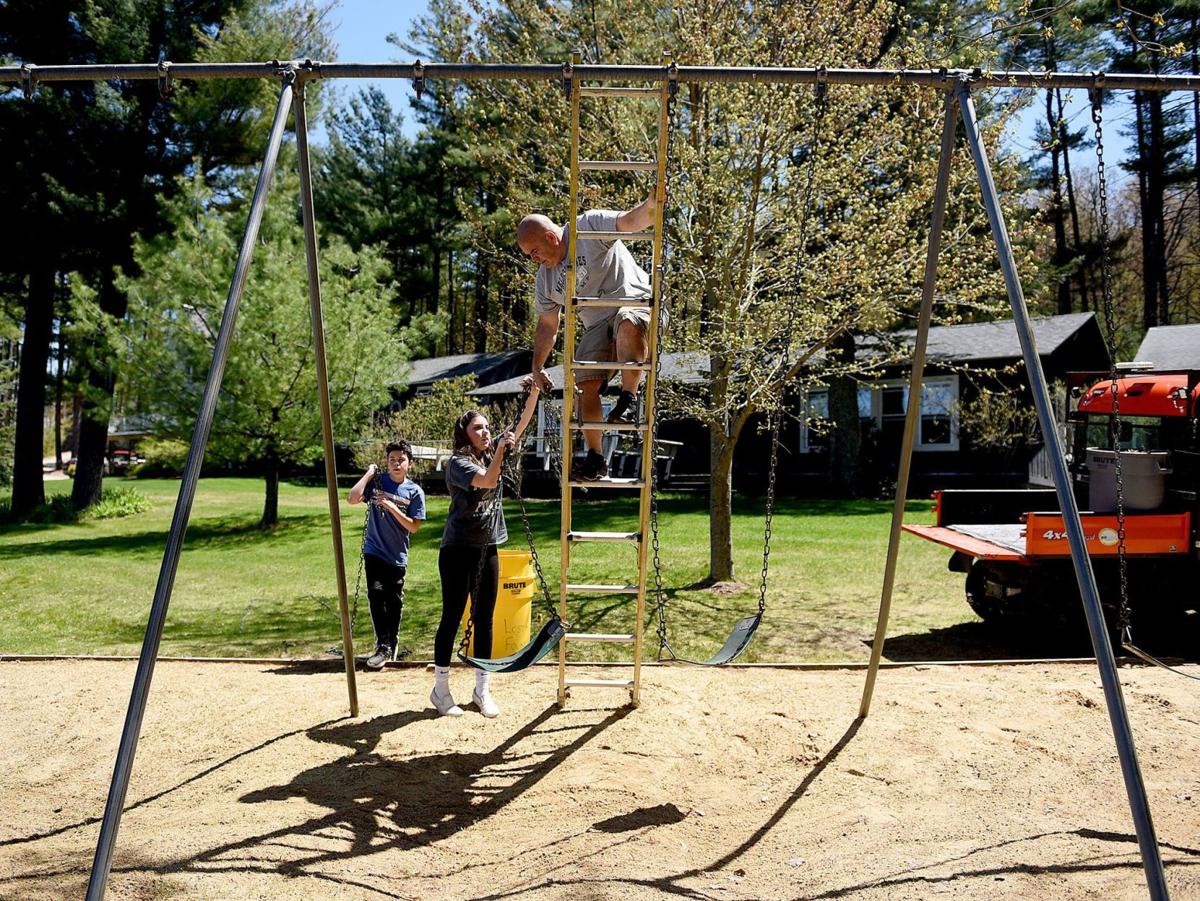 Owner Steve Connors sets up playground equipment with help from his children, Jackie, 14, and Scott, 12, while getting Melody Pines Day Camp ready for the season last week.. 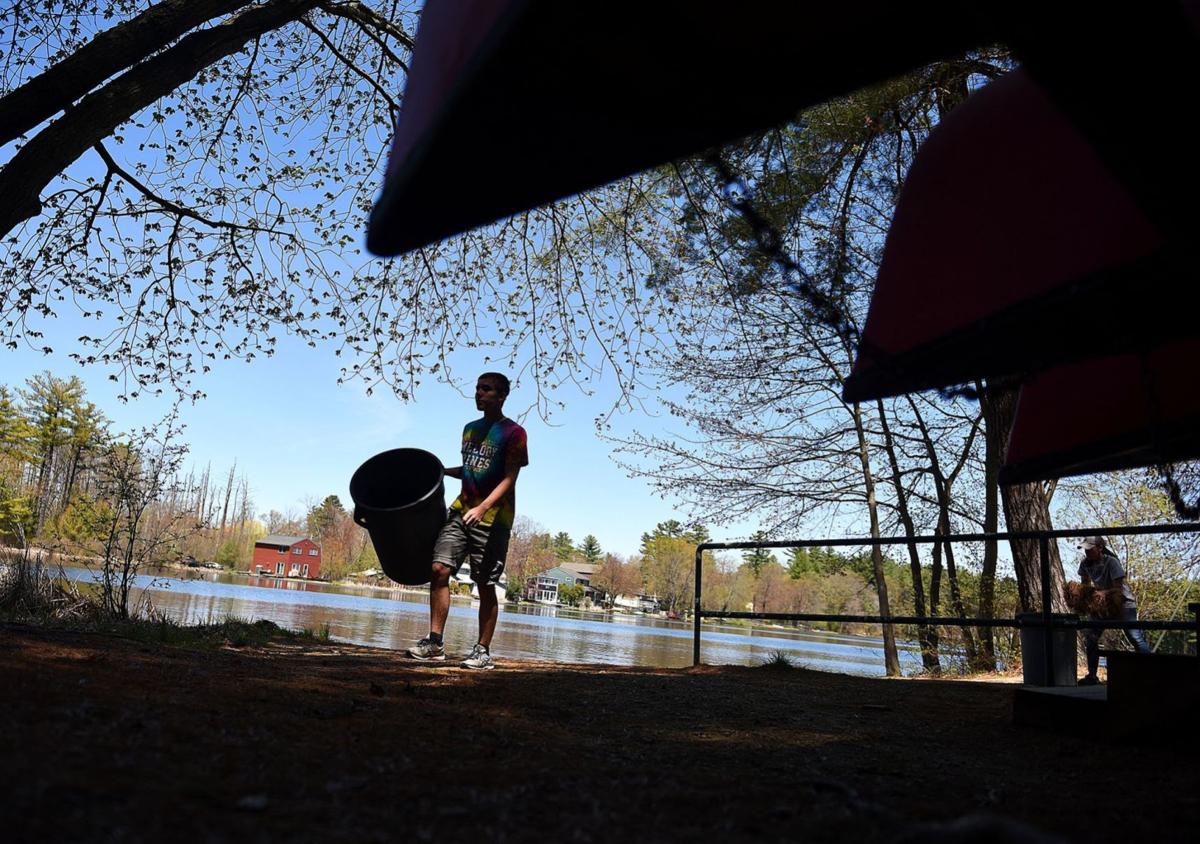 Colin and Erika Connors rake pine needles on the waterfront at Melody Pines Day Camp on Crystal Lake in Manchester . 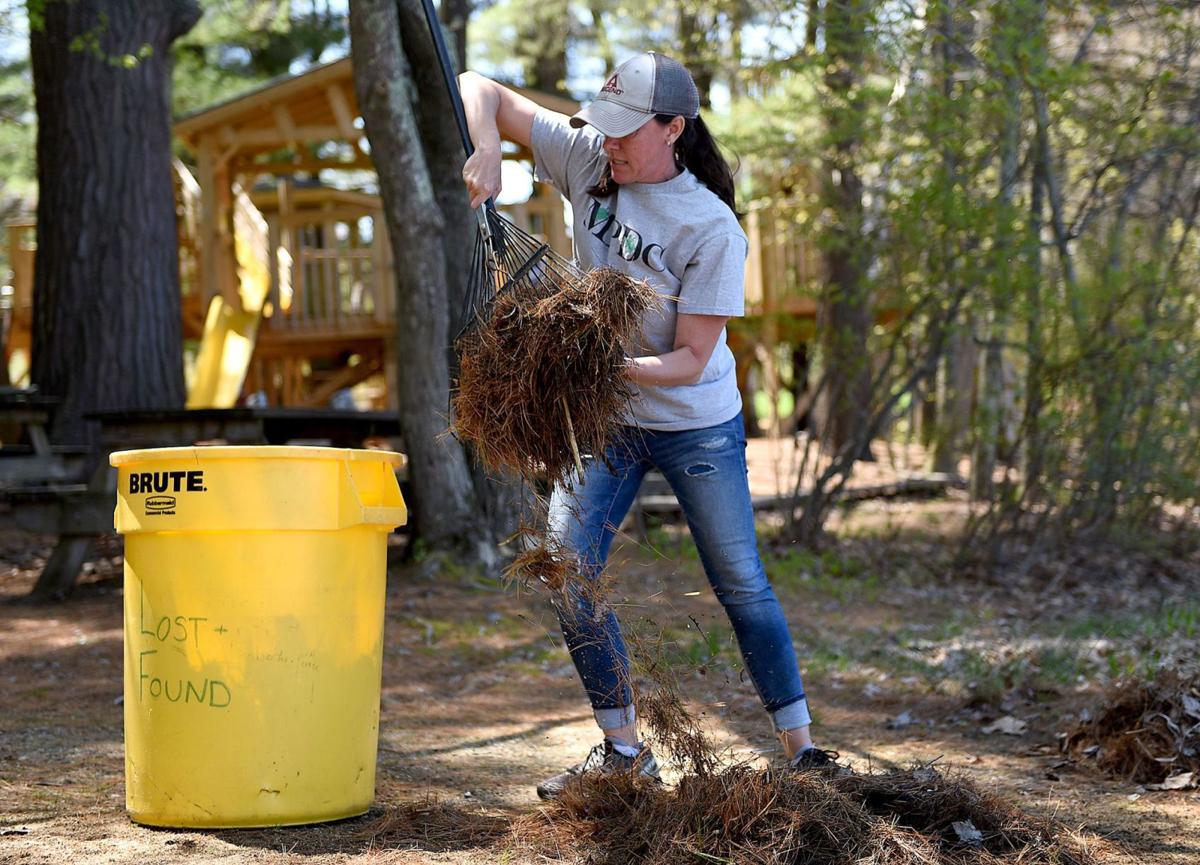 Owner Erika Connors of Melody Pines Day Camp cleans up pine needles at her camp on Crystal Lake in Manchester on May 14, 2020.

Owner Erika Connors of Melody Pines Day Camp sweeps out a boat house at her camp on Crystal Lake in Manchester on Thursday.

Owner Steve Connors sets up playground equipment with help from his children, Jackie, 14, and Scott, 12, while getting Melody Pines Day Camp ready for the season last week..

Colin and Erika Connors rake pine needles on the waterfront at Melody Pines Day Camp on Crystal Lake in Manchester .

Owner Erika Connors of Melody Pines Day Camp cleans up pine needles at her camp on Crystal Lake in Manchester on May 14, 2020.

Swimming in the lake, singing goofy songs and eating together in the mess hall — all timeless summer camp activities that are likely to be different this year if they happen at all, thanks to the COVID-19 pandemic.

Several camps across the Granite State had already decided not to open this year, even before federal and state recommendations were released.

Melody Pines Day Camp in Manchester has a countdown on its website in hopes of opening on June 15 — 28 days.

Registration for campers sold out months ago, but the camp is waiting for more specific guidance and asking families to be patient, said owner Erika Connors.

“The closest we’ve come to camp not opening is delays to the start of the season because of snow days in the school calendar,” she said. The camp serves 275 children each week for 10 weeks with activities like archery, team sports and swimming in Crystal Lake.

The Centers for Disease Control issued guidance Friday with recommendations for camps to operate this summer, but leaving the specifics up to each state. New Hampshire’s Economic Reopening Task Force is expected to release its guidelines later this week.

“Right now, we are waiting on action from the governor and the state to say whether we can open, and if we can open, what those guidelines are going to look like,” Connors said.

Melody Pines Day Camp is among more than 160 licensed youth recreation camps across the state waiting to figure out their next moves. Many families rely on day camps as child care during the summer months.

The American Camp Association and the YMCAs of the United States are also set to release a field guide as a resource for camps across the country. The guide will include everything from communication, health screenings, facilities, food services and delivery, cleaning and disinfection, activities, social distancing for campers and staff, transportation and personal protective equipment plans.

“The safety and health of campers and staff is always the highest priority at camp, and camps have a long history of planning for and managing communicable diseases,” the association wrote on its website.

“I don’t think there is a camp in the country — in the world — that wouldn’t say safety is the No. 1 priority,” said Ken Robbins, director at Camp Kabeyun in Alton Bay and president of the New Hampshire Camp Directors Association. “They have to feel as though the campers, the staff and the surrounding community would be safe if they’re going to run.”

Camps will have to weigh the pros and cons of opening with certain precautions in place.

“There are some camps that may decide this isn’t workable and it won’t look and feel enough like camp to make sense,” Robbins said. “And there are other camps that will do everything in their power to operate again as long as it can be done safely.”

Day camps and overnight camps face different challenges. “Resident camps get everyone into camp and presumably they can keep them there safe and healthy, whereas day camps you have the kids and staff are going home every night,” Robbins said. “They are going to have to approach and solve this problem separately.”

The YMCA of Greater Nashua operates four different day camps, including Camp Sargent, a summer day camp on Naticook Lake in Merrimack that offers programs for boys and girls 5 to 16 years old. Typically, the organization serves 600 kids a day at its camps.

“We are planning to serve as many kids and families as we are allowed to this summer,” said Joseph Manzoli, chief operating officer. “We know camp and child care is critical for people to go back to work.”

The YMCA has remained open for emergency child care for essential workers for the last eight weeks.

“We’ve learned a lot there in terms of checking in the kids, the staff and parents,” he said. “Everybody gets their temperature taken, everybody takes a quick questionnaire.”

The organization developed new drop-off and pickup procedures and plans to keep campers in small groups.

“We’re planning on running all those programs. We just know they are going to look different,” said Manzoli. “There may be capacity issues. We may be limited in the number of kids we can serve.

“Another thing we are looking at is to see if we can run small camps in some of the communities to make sure that those families have something for their kids to do.”

Camp Kabeyun on Lake Winnipesaukee has been around since 1924.

“Camp is a really big part of kids’ lives throughout the country but very specifically in New England, it is part of the fabric of the culture here,” Robbins said.

Many kids have been feeling a sense of isolation from not being in school, Manzoli said.

“It is really critical to make sure we come up with ways to make sure kids have a fun and memorable experience this summer,” he said. “We’ve all been asked to sacrifice a lot but kids in particular. It is a lot harder for kids to be isolated and not with their friends.”

Connors said parents are anxious to know if they can send their kids to camp this summer.

The drop-off and pickup of 275 kids at the camp likely will be the biggest hurdle to overcome.

“We are hoping for answers to come from the state sooner rather than later so we can continue to prepare or move forward and figure out plans for families and staff if we were not able to open,” she said.

The polio epidemic in the 1950s is the last major health crisis that camps faced, Robbins said.

“We are in uncharted waters,” he said. “It has become a cliche, but there is no better description. There is no playbook for this.”