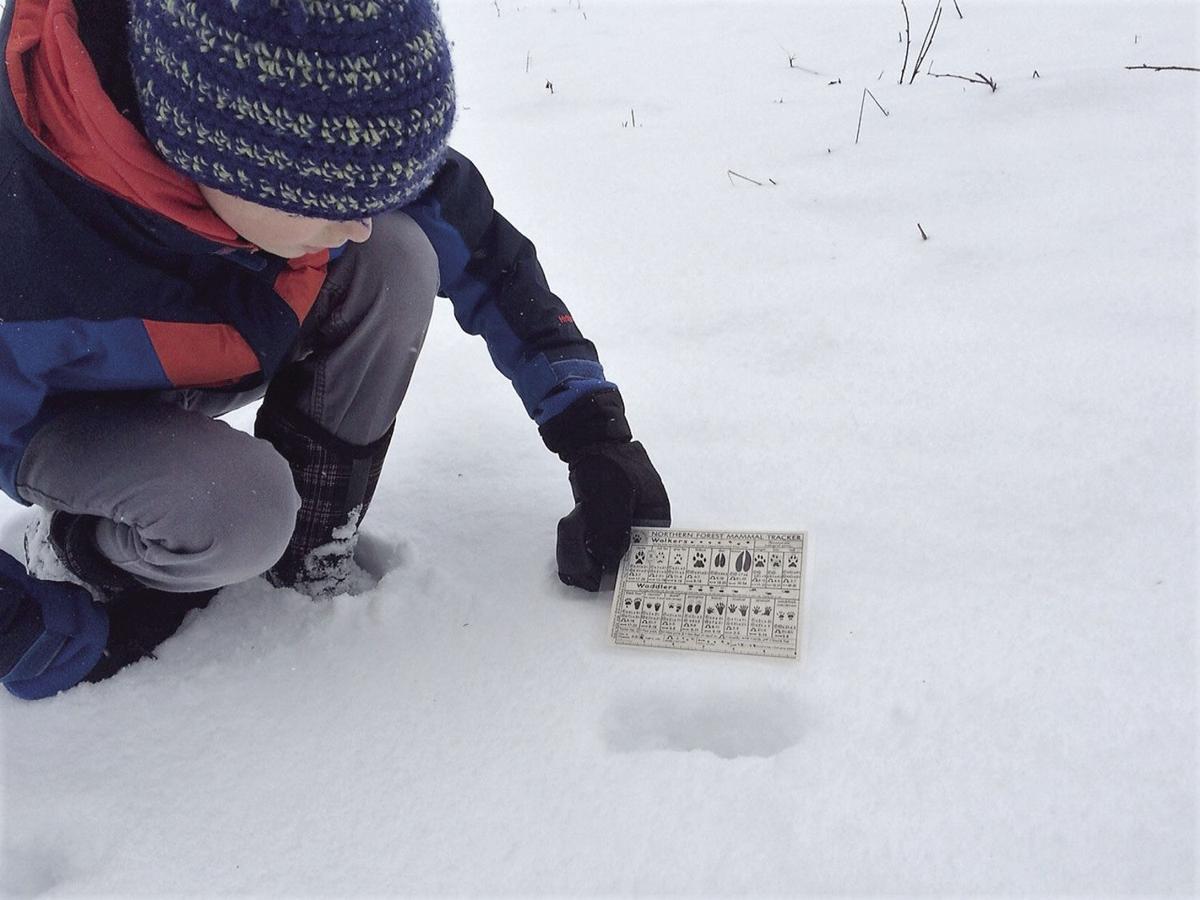 A young naturalist uses a tracking card to measure a deer track, one of many animal tracks discovered near a cluster of apple trees. 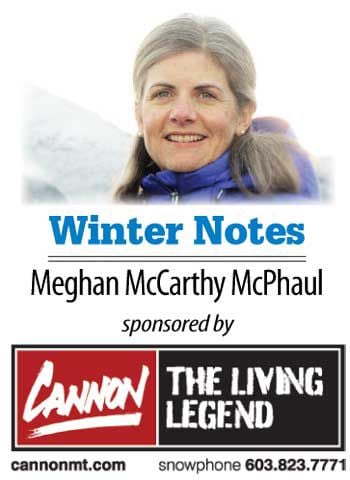 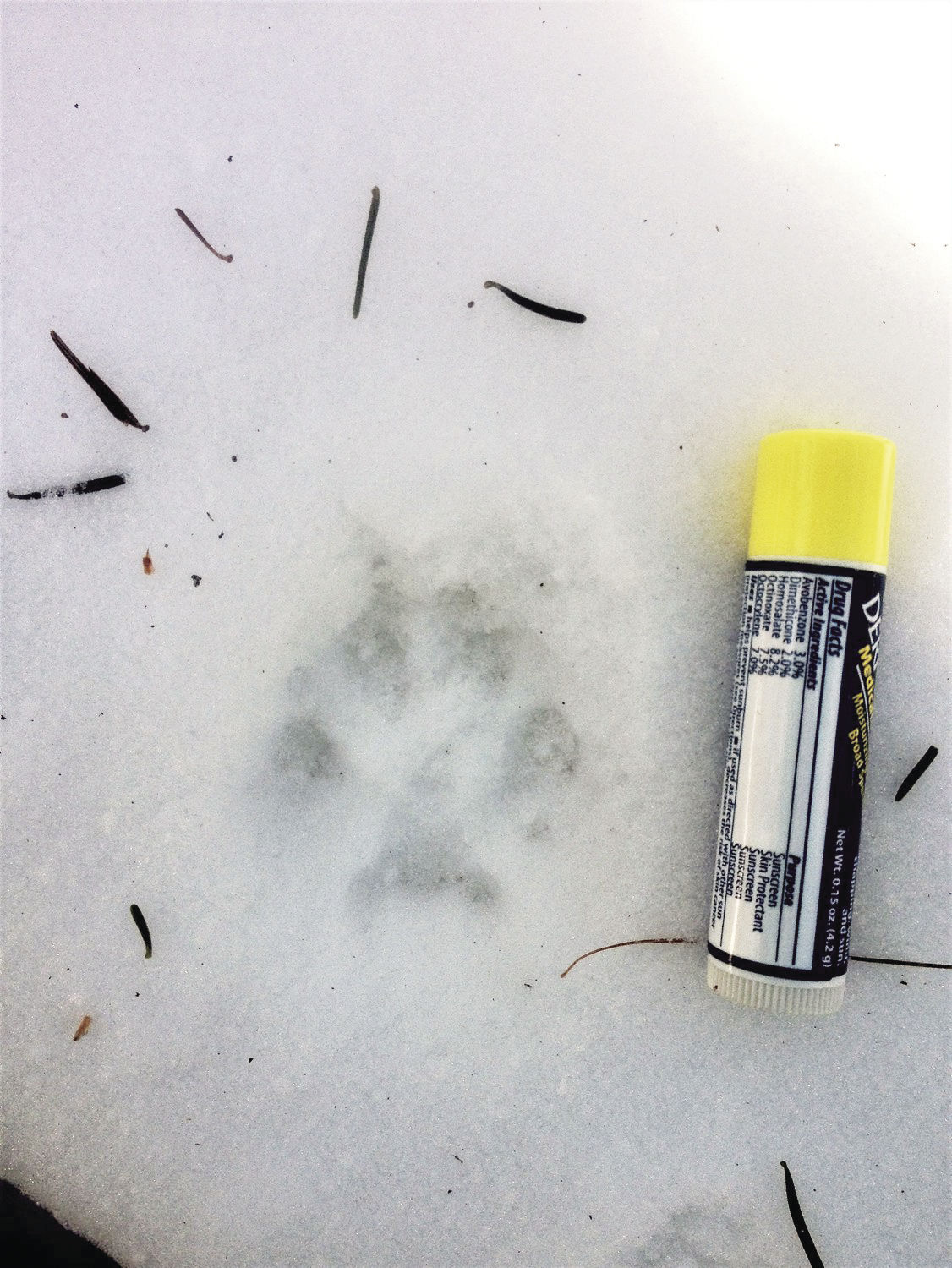 Even imperfect tracks – like this gray fox print – may be identified with the help of a good guidebook or tracking card. Using an object with a straight edge to give sizing perspective is helpful if you don't have a ruler on hand.

A young naturalist uses a tracking card to measure a deer track, one of many animal tracks discovered near a cluster of apple trees.

Even imperfect tracks – like this gray fox print – may be identified with the help of a good guidebook or tracking card. Using an object with a straight edge to give sizing perspective is helpful if you don't have a ruler on hand.

It may seem like the outside world hunkers down for the long, cold months of winter. But a close look at the snow-covered landscape reveals there is plenty of activity happening in the wild — and not-so-wild — places around us. Winter is a great time for the novice naturalist to garner a few hints about what the animals are up to, whether it’s squirrels in the backyard, deer wandering across the driveway, or porcupines deep in the woods.

“You can see tracks really easily in the snow,” said Angie Krysiak, program director at New Hampshire Audubon’s Massabesic Center. “When you get really good at tracking, you can do it all year. The more you do it, the better you’re going to get.”

Tracking involves more than just finding animals’ paw prints and hoof marks in the snow. Ever notice a pile of evergreen cone scales at the base of a tree or atop a fallen log? These “middens” are likely the work of a squirrel who both stores and discards food in these piles. Moose and deer feed on the buds and new growth of many species of trees, leaving scrape and chew marks behind.

Owls create wing marks when they’ve landed, talons-first, in the snow to catch prey. That small prey — mice, voles, and shrews — make tunnels below the surface of the snow. Careful observers will see these tunnels during times when the snow melts a bit. Or look for an air hole in the snow, often around a tree trunk or rock, and do a bit of digging to uncover the labyrinth below. We once found one near the vegetable garden, complete with a cache of carrot stumps pilfered from the compost pile.

“Scat is extremely informative,” said Krysiak. The scat’s shape often reveals which animal left it, or at least which family of animals. And close examination may divulge information about diet — things like fish scales (perhaps an otter) or hair and bone fragments (possibly a fox or coyote). Fisher, one of the few predators to successfully prey on porcupines, often deposit scat containing quills. Ouch!

Speaking of porcupines, they’re active throughout the winter. In the woods behind our house, where I often ski, there’s a porcupine trail through the snow that has followed the same route for years: from rocky outcrop, through a mixed hemlock forest, across the ski path, and down to the brook. The trail is trench-like, as if something simply plowed through the snow.

If you look closely, you may actually see quill holes in the snow at the edges of the trench, said Nigel Manley, director of the Society for the Protection of New Hampshire Forests’ North Country Conservation & Education Center in Bethlehem and an avid outdoorsman. Porcupines leave other signs, too, including gnawed-away outer bark on trees and nipped hemlock twigs that fall from the high perches where the prickly critters climb to eat the needles.

Other animals out and about through the winter include coyotes, red and gray foxes, turkeys, bobcats, snowshoe hare, and members of the mink family. While their tracks through the fields near our house suggest the animals all have their own paths to follow — some meandering in search of prey — there are a few common areas, including around the apple trees.

“If there are apples still on the trees, look around those and you’ll see whatever’s coming in to feed on them,” said Manley.

Of course, figuring out which track belongs to what animal is not always straightforward.

“It’s all a little bit subjective,” said Krysiak. “It’s not often you’re going to get that exact perfect track.”

She finds the best tracks pressed into what she calls “snowball snow” — a little bit wet to hold a track’s shape. Manley finds the best tracking is when there’s a hard-pack layer — a human-made snowshoe or ski trail, for instance — covered with about half an inch of new snow.

“If you’ve got that hard-pack underneath, you can really tell what the tracks are,” he said.

Both suggest novice trackers head out with a good tracking guide, preferably one that will fit in a pocket and includes a ruler. New Hampshire Fish and Game provides a printable tracking card online (www.wildlife.state.nh.us/wildlife) that shows various tracks, as well as the different gaits of animals. A camera or sketch pad is also a good tool, for further investigation once trackers have returned home.

There are so many tricks to tracking — distinguishing a bounder (members of the weasel family) from a hopper (hares, rabbits, and many small rodents) or a walker (wild canine, feline, and cervidae family members) from a waddler (porcupines, bears, raccoons); how to tell a canine track from a similarly sized feline track; and simply knowing which animals are out and about in the snowy landscape.

A tracking program guided by wildlife experts is a great way to start. For information about tracking programs offered through New Hampshire Audubon, visit www.nhaudubon.org. Programs at the Forest Society’s Rocks Estate are listed at www.therocks.org. The Appalachian Mountain Club also includes winter tracking tips in many of its snowshoe outings and Winter Family Adventure programs at locations around the state; visit www.outdoors.org to learn more.