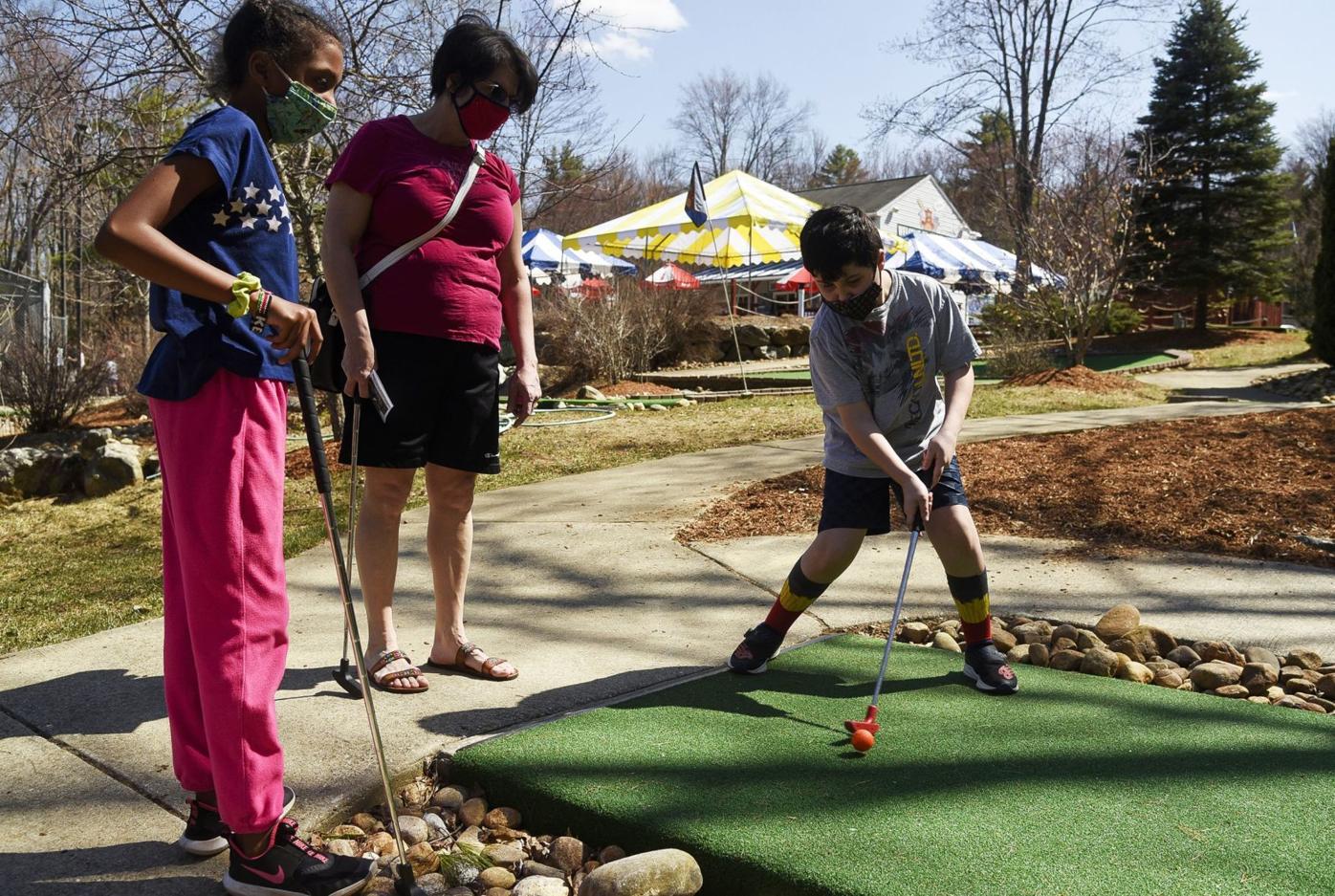 At left, Samantha Duntley, 9, of Chichester, and Robyn Guarino, of Concord, watch as her son, Stephen, 10, swings the club during a game of mini golf at Chuckster’s Family Fun Park in Chichester on Saturday. 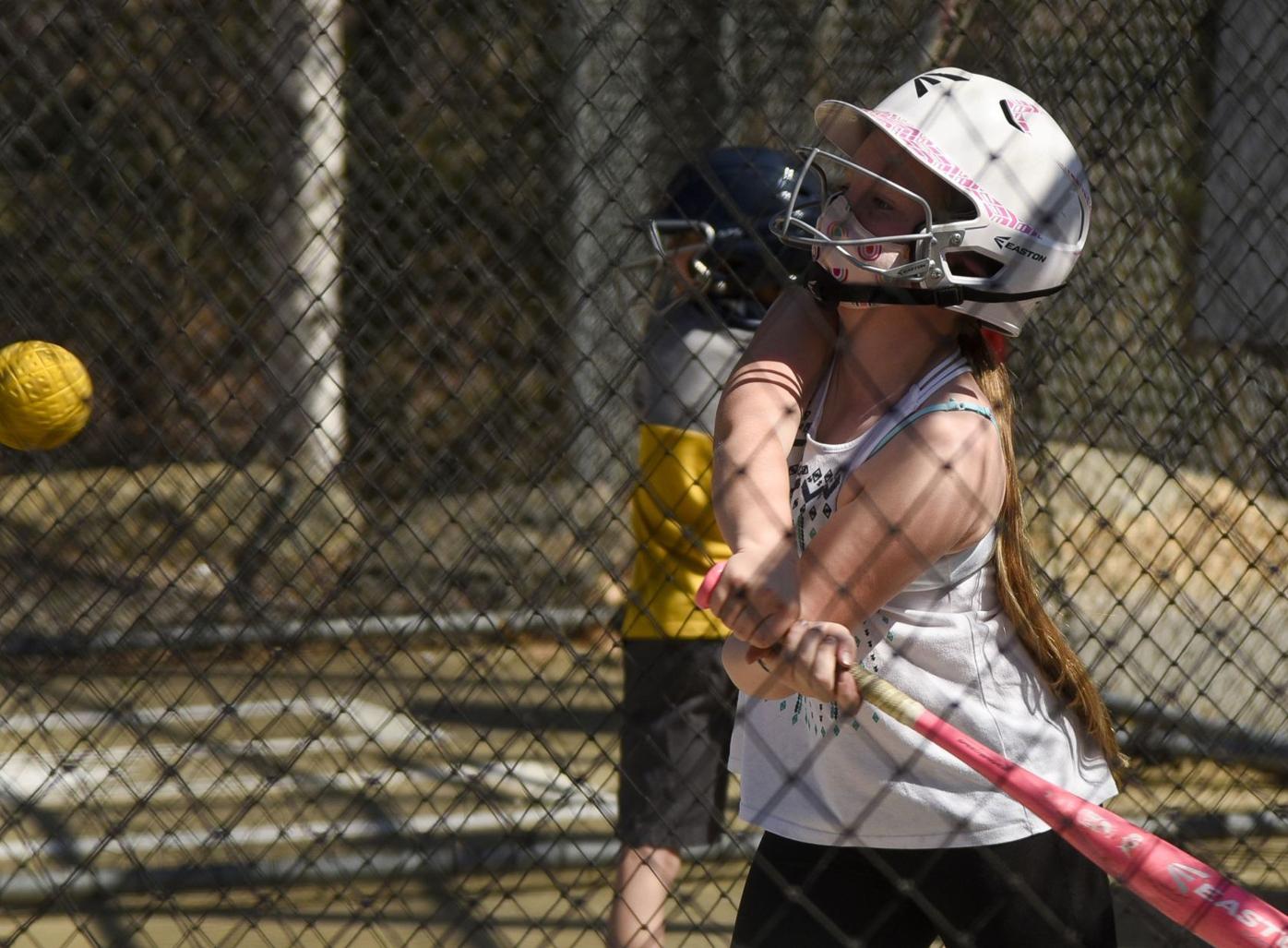 Addison Babcock, 10, of Pittsfield, hits a ball in the batting cage at Chuckster’s Family Fun Park in Chichester on Saturday.

At left, Samantha Duntley, 9, of Chichester, and Robyn Guarino, of Concord, watch as her son, Stephen, 10, swings the club during a game of mini golf at Chuckster’s Family Fun Park in Chichester on Saturday.

Addison Babcock, 10, of Pittsfield, hits a ball in the batting cage at Chuckster’s Family Fun Park in Chichester on Saturday.

The sounds of pinging bats and revving go-karts filled Chuckster’s Family Fun Park in Chichester for its opening this past weekend.

Mel’s Funway Park in Litchfield also opened its gates for the season.

Next month, Candia Springs Adventure Park will have a grand reopening after the park did not open last year because of the COVID-19 pandemic.

Each opening is a welcome sign of warmer days ahead.

“With the good weather the last three weeks, it was easy to get everything all cleaned up and ready to roll,” said Mark Blasko, owner of Chuckster’s. “Sometimes we have to do that very quickly if there is still snow on the ground when April starts.”

Blasko said Chuckster’s 15th season is off to a strong start with continued interest in outdoor activities during the pandemic. A second mini-golf course and ice cream stand is located in Hooksett.

Last year, the park opened seven weeks later than normal and was not able to host larger groups such as schools and corporate outings.

“Once we did get open it was very, very busy,” Blasko said.

Come Memorial Day, Chuckster’s plans to open its latest attraction: Bumper boats, which will run out of a 3,500-square-foot bumper boat pond. Other improvements include new carpeting for mini-golf, LED lighting, a paved parking lot and a private area for large groups to gather.

“Bumper boats are kind of the last of what I would call the major attractions that have mass appeal, a lot of attraction only appeal to some segments,” Blasko said. “Mini-golf and go-carts appeal to about everyone and I think bumper boats will be in that category.”

Mel’s Funway Park will also open a brand new 5,500-square-foot bumper boat pool on Friday. The setting looks like a fishing village, complete with a 20-foot lighthouse, which squirts water at guests.

New additions also include Kiddie Land, geared toward kids 2-10, and a new restaurant, Day Of The Dead Mexican Taqueria.

“We like to try to get open within the first couple weeks of April so then we can work out the kinks by the time April vacation gets underway,” said Michael Accomando, one of the owners.

He said last year was tough.

“We really tried to put our best foot forward,” he said. The new attractions had to be delayed by a year. The mini-course was also fully renovated.

“Having the ability to be open in April is breathtaking. It is absolutely terrific,” Accomando said. “The team has worked so hard to get the park open and get it ready for our customers.”

After the owners of Candia Springs Adventure Park, NFI LLC, decided to permanently close, Steve Coppin, then-director of operation, worked out a deal to lease the property and operate his own business.

The property includes a waterpark, an outdoor ropes course and zipline. The company hosts summer camps each year.

He felt optimistic about the future of Candia Springs after working for eight months at Alpine Adventures in Lincoln, also owned by NFI.

On May 22, Candia Springs will host a 10K race as part of its reopening. Its zipline will be the only attraction open. The park will officially open on May 28.

“It seems like people are wanting to get out,” Coppin said. “It’s surprising we are getting quite a bit of group interest. They are not as big as they used to be.”

He expects to change up some of the rope course features. “If people have been out to the aerial forest before, they’ll definitely want to come back,” he said.

Up north, Alpine Adventures in Lincoln reports strong bookings for its ziplines and off-road tours. Unlike Candia, the business is open year-round.

“Starting in September through this last month of March our numbers have been up 70% over normal,“ said Jeff Woodward, a managing partner. “We expect to be slammed this summer.”

Reservations must be made online and groups are limited to 10. A new attraction includes a guided, self-driving side-by-side off-road vehicle tour opening on Memorial Day.

Even if they can open at full capacity, Whale’s Tale Waterpark will limit its capacity to 1,200 to make sure it’s not overcrowded. The park can hold up 2,400 on a busy day. Last summer, it operated with a maximum of 700.

All the parks will continue to follow COVID-19 restrictions.

Blasko is confident for another positive year, especially with the return of groups such as schools, camps and company outings.

“People are really excited to get outside more than normal to get out this spring,” he said. “I think all outdoor attractions all over the state should be busy this spring.”

“People just want to get out,” he said.

“They just want to have fun now. People still aren’t 100% about going indoors yet, so I think that businesses like ours really will excel this season.”