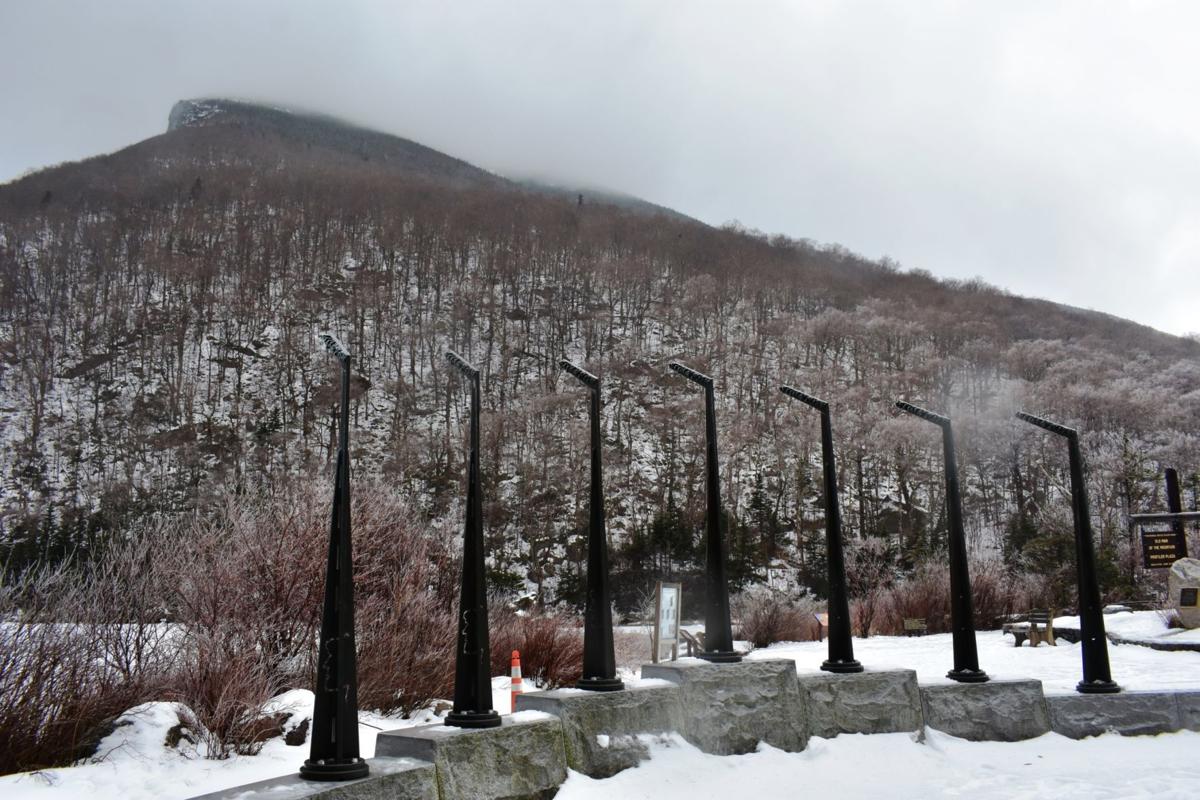 By staring along the axis of one of the precisely-aligned viewers at Profiler Plaza in Franconia Notch, visitors see an image of the Old Man of the Mountain superimposed on Cannon Mountain where it once stood. 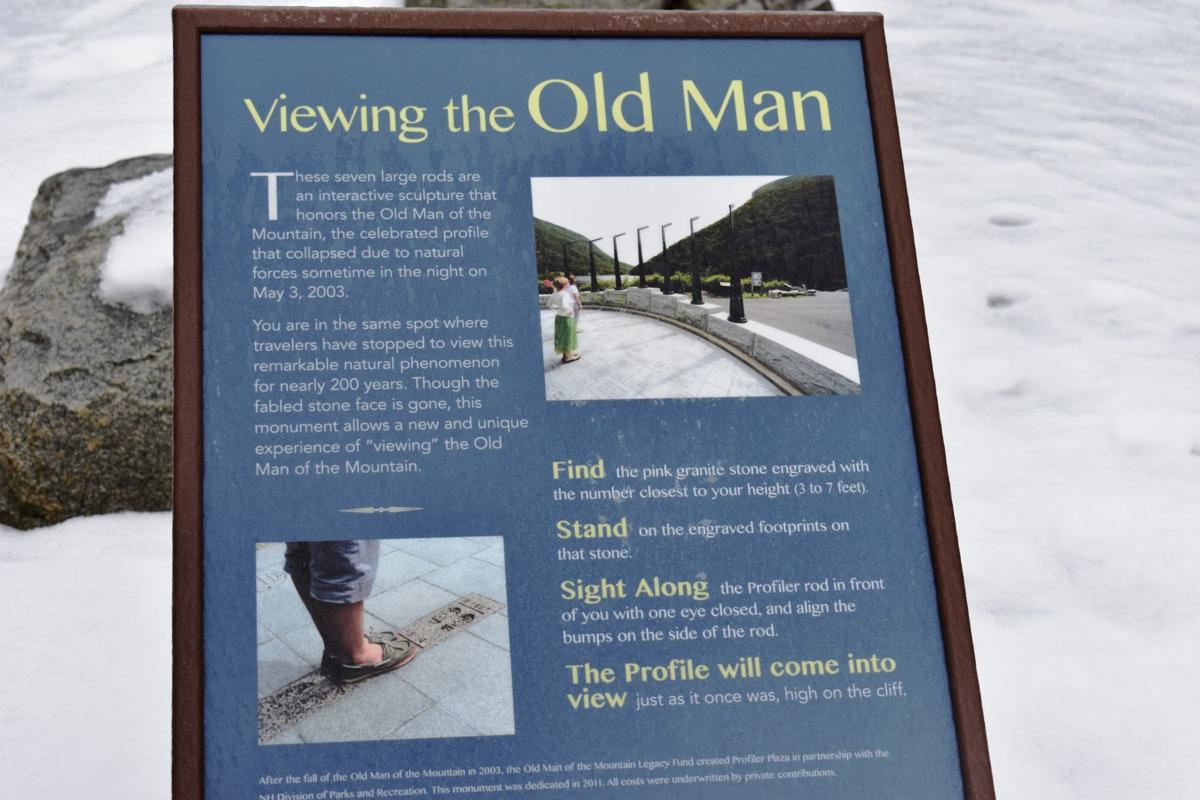 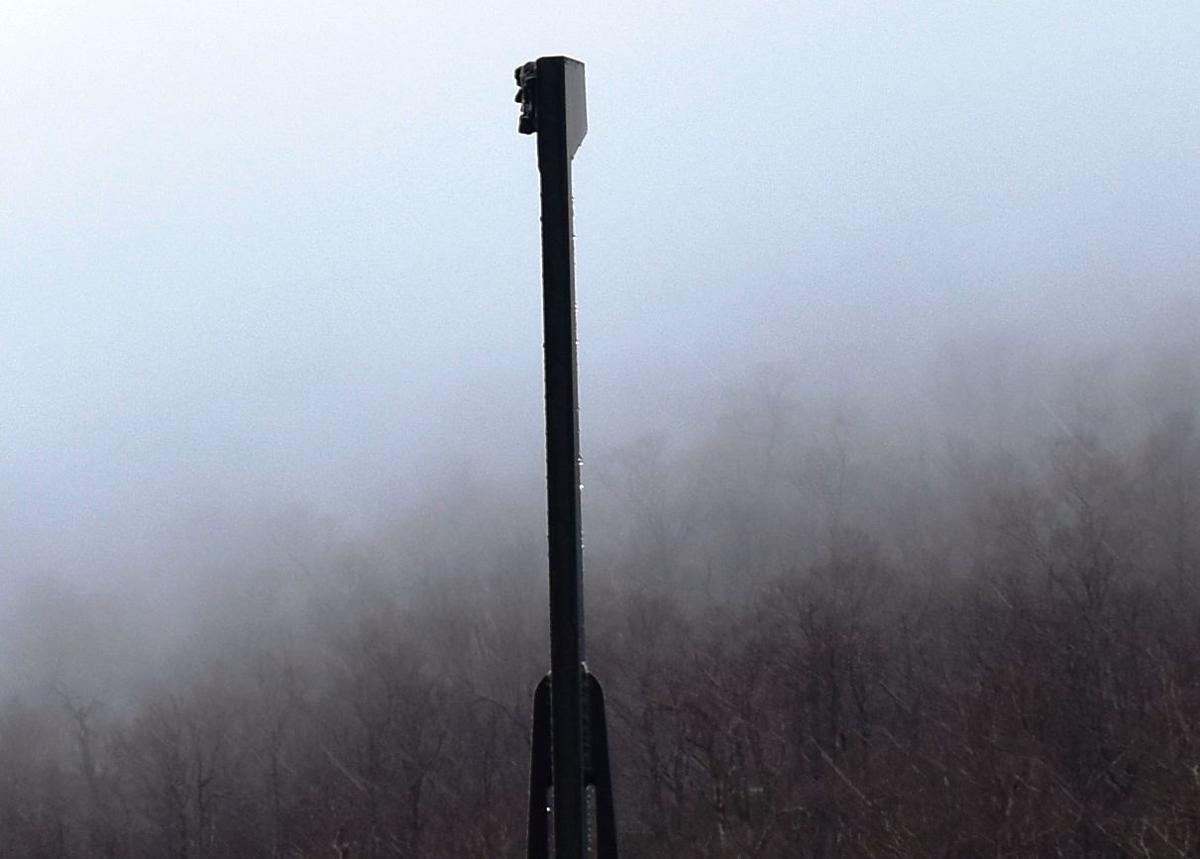 FRANCONIA — An organization created to provide a “lasting legacy of remembrance” for the Old Man of the Mountain, which until May 3, 2003, hung high over Franconia Notch, says its work is nearly complete.

Working in partnership with the New Hampshire Division of Parks & Recreation, the Old Man of the Mountain Legacy Fund, a nonprofit organization, opened Profiler Plaza on the northeastern shore of Profile Lake in 2011. Work at the plaza will conclude by the end of next summer with one final project hopefully in time for a ceremony coinciding with the 94th anniversary of the state dedicating Franconia Notch to New Hampshire veterans, according to Dick Hamilton, Legacy Fund vice president.

Legacy Fund will install a handicapped-accessible walkway to Profile Lake as well as an elevated walkway off the path to Profiler Plaza that connects to the Pemigewasset Trail, he said.

The projects will cumulatively cost about $250,000, or about $100,000 more than the Legacy Fund currently has in the bank, Hamilton said Friday, noting he is confident that money can be found or raised.

Before succumbing to the pull of gravity weakened by the cumulative effects of wind and water, the Old Man was “the No. 1 attraction in New Hampshire and I think in New England, too,” said Hamilton, a Littleton resident, who was the first president of White Mountains Attractions, which actively promoted the Old Man and Franconia Notch.

President of the North Woodstock-based WMA from 1970 through 2005, Hamilton was well known for saying “Good night, Boss” every time he drove home under the visage also known as the Great Stone Face.

“And I still do,” said Hamilton, “because he meant so much to me over the decades of my career.”

The Old Man meant a lot to many people, Hamilton said, and that is evidenced by the fact that, with the possible exception of the final two elements that await completion, all of the work in Profiler Plaza has been paid for by donations.

Hamilton said that when the Legacy Fund was seeking an appropriation of several million dollars for an audacious Old Man remembrance, the Legislature amended the request to say “that the state shall not participate in any fundraising, construction, operation and maintenance of any memorial,” recalled Hamilton.

Down in Concord, lawmakers “are paid a hundred dollars a year and they’re worth almost every penny of it,” he joked, adding that the lack of support from the Legislature forced the Legacy Fund to get creative and to eventually come up with the idea of selling engraved benches and paving stones in the plaza to bring in money.

Annually, Profiler Plaza welcomes about 35,000 visitors, he said, drawn by attractions including Legacy Fund–run museums at the plaza trailhead and the nearby Cannon Mountain Tram; interpretive signage about Franconia Notch’s natural and human history; the restored stone Profile Cottage; and at the heart of it all, seven stainless steel “profilers.”

By standing on stones in the plaza that correspond to their heights, visitors can look at a profiler and are thus able to superimpose an image of the Old Man back onto Cannon Mountain.

“We see a lot of stone owners who come by and they get very emotional because the stones often commemorate someone in their family,” said Hamilton.

“One woman came in and said that after her husband passed away, he was buried in a Massachusetts cemetery where a couple people might see his headstone, whereas here (in Profiler Plaza) a lot of people will see it and remember him and I thought that was pretty cool.”

“We have stones from the Philippines, Germany, England, Canada” and from all over the U.S., he said, “and I think we probably could sell another couple hundred stones if we wanted to, but the site is the site and it looks good and we’re very proud of it and the public is very supportive of it. It’s low key, a nice presentation and appropriate for the site.”

Hamilton said when the work in Profiler Plaza is done and the Legacy Fund turns it over to the state, the Legacy Fund will reorganize as the Friends of the Old Man of the Mountain.

“We’ll keep an eye on the notch and make suggestions, and while we won’t have any say at the site anymore, we’ll make sure it’s maintained in the manner that it is now,” he said. The organization may also continue to run the museums.

Regardless of who has authority over Profiler Plaza, Hamilton believes it will continue to be popular, adding that in speaking with leadership at the New Hampshire Division of Parks & Recreation, they were “quite excited about it because it’s a new attraction in Franconia Notch and it’s free.”

A spokesman for the Division of Parks & Recreation on Friday said Director Philip Bryce was not immediately available to comment on the agency’s future plans for Profiler Plaza.

Worried that he might be “bored to death” when the Legacy Fund wraps up its work, Hamilton said he has many fond, funny memories of how Profiler Plaza came to be.

At one point, there was a plan to recreate a vertical image of the Old Man by installing five giant stones in the plaza, he recalled, but there were several challenges; the first and foremost was that the stones would be quarried in Vermont.

“It was the only quarry in the East that could quarry a stone that big,” he said, adding that the stones, which weighed 120 tons each, would have needed to be transported on a specialized vehicle.

Apart from being relatively rare in this part of the country, that vehicle would have required alterations to the Franconia Notch Parkway, which already exists as a huge compromise with federal authorities as the Interstate 93 narrows from four to two lanes.

That compromise, Hamilton explained, came about because of concerns that the larger highway would have had a negative impact on the environmentally-sensitive area and more specifically on the Old Man, which prior to its collapse had been held up with steel turnbuckles, metal mesh netting and epoxy.

“I don’t think we would have gotten permission due to the sensitivity of the highway in that area,” said Hamilton. The two other contributing negatives were that the stones would come from the Green Mountain state and to move those giants from the parkway to the site would have required a temporary exit that would have cost $1 million, he said.