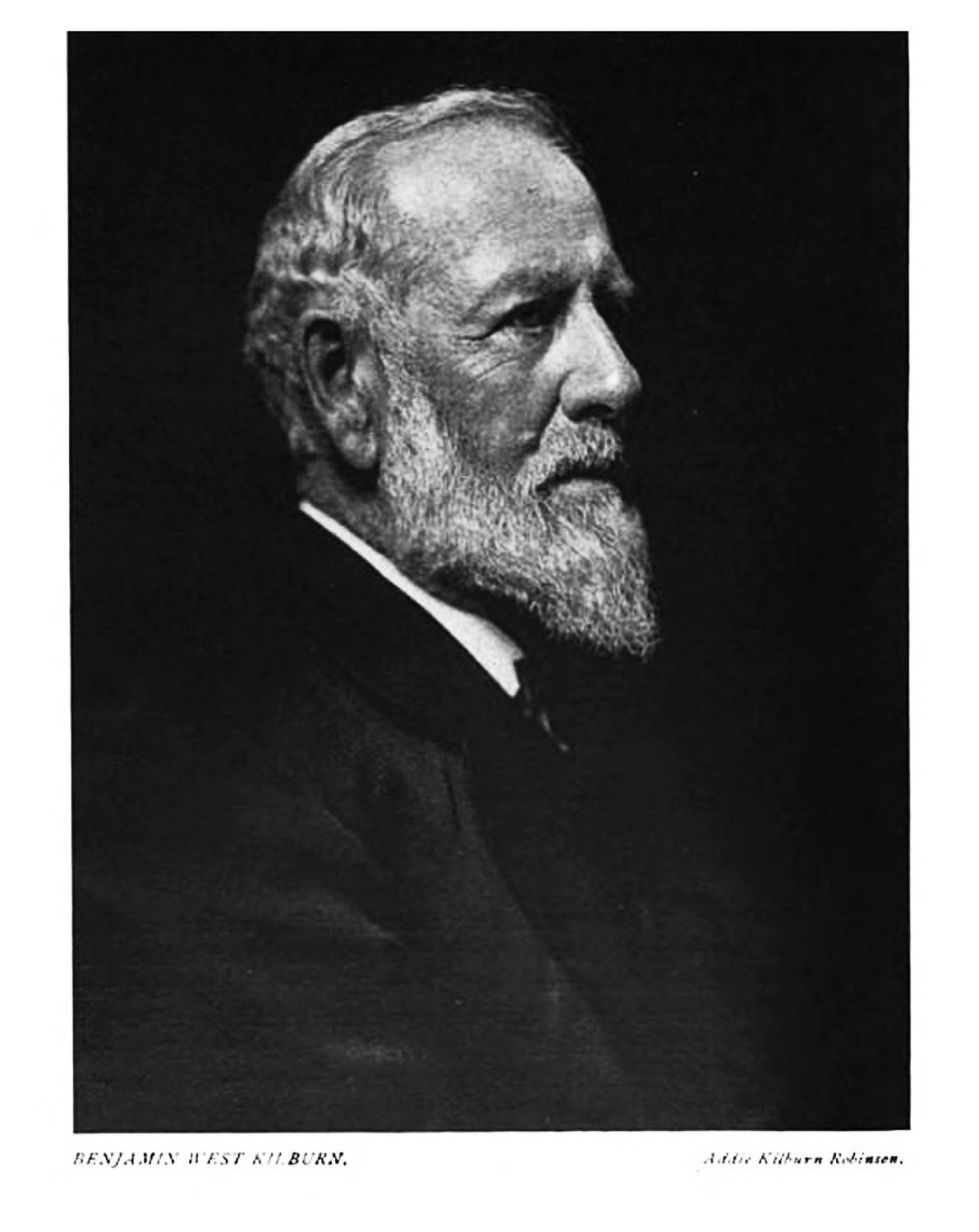 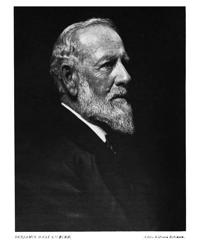 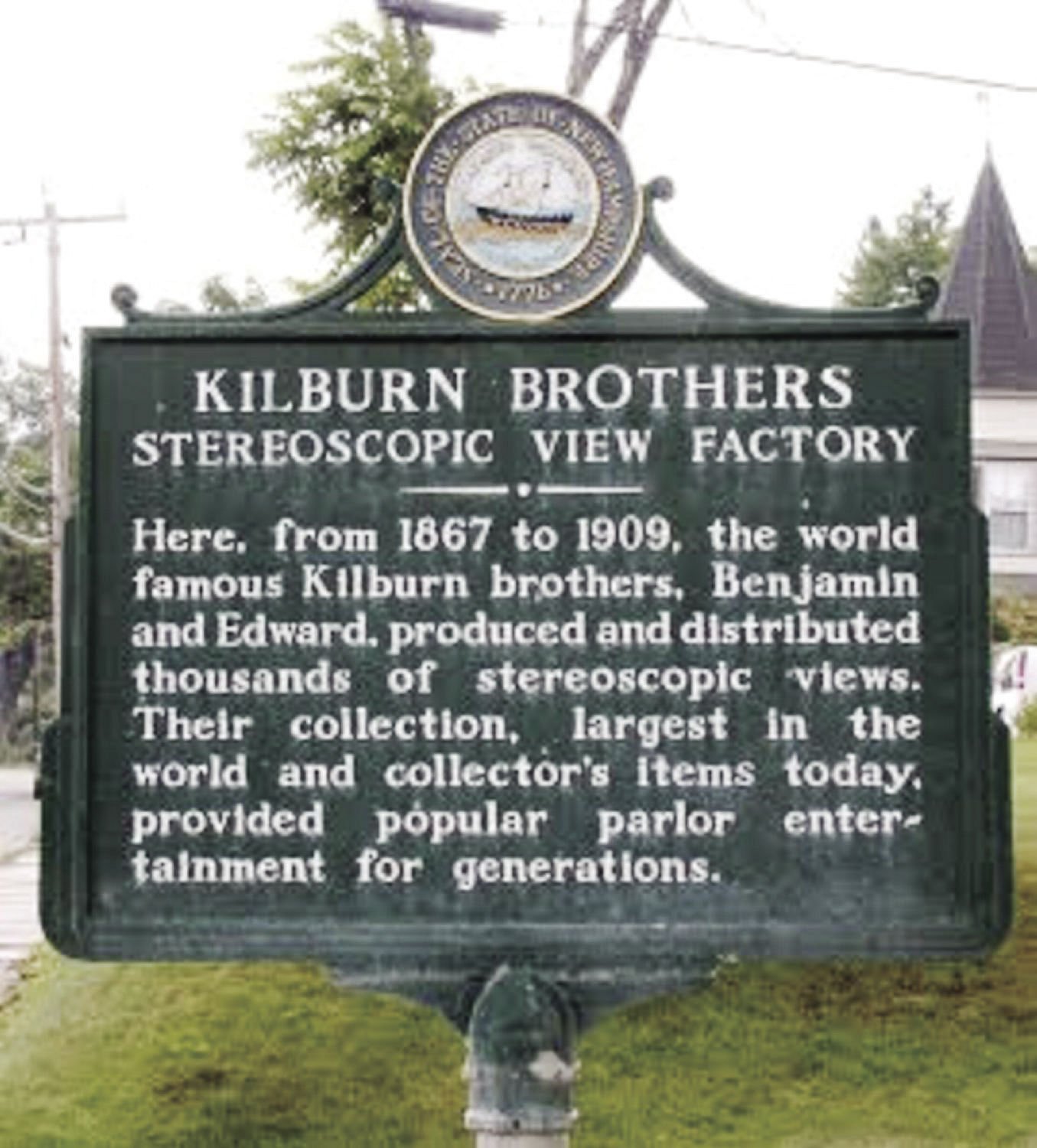 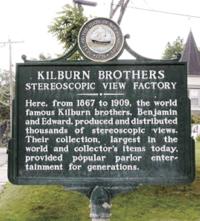 Location: The lawn of the old factory, at the intersection of Kilburn and Cottage streets (Route 302), south of the river in downtown Littleton.

What the sign says: "Here, from 1867 to 1909, the world famous Kilburn brothers, Benjamin and Edward, produced and distributed thousands of stereoscopic views. Their collection, largest in the world and collector's items today, provided popular parlor entertainment for generations."

The back story: For stereoscopic views, two nearly identical photographs were mounted side by side and viewed through a stereoscope device to produce a three-dimensional image.

Kilburn Brothers' stereoviews date from about 1865. Published sources attribute their stereographs (stereo-photographs) before 1876 solely to Benjamin Kilburn (1827-1909). Edward Kilburn (1830-1884), however, learned the art of photography from daguerreotypist Ora C. Bolton of Waterford, Vt., at an earlier date. Bolton also taught Franklin G. Weller of Littleton, who became a notable stereo-photographer who would introduce comic views of a special local color and pioneer a popular line that appeared in later Kilburn subject categories. Bolton was connected with another early stereo-photographer, Franklin L. White of Lancaster, who published a view list of glass stereographs in 1859.

Early period Kilburn stereoviews were sold by Joseph L. Bates, a retail outlet on Washington Street in Boston that specialized in Oliver Wendell Holmes stereo-viewers. A Kilburn-Bates stereoview catalog was published about 1867. Commercial support from Bates gave Kilburn Brothers their first significant push in the marketplace.

Their first stereoscopic views were produced in Edward Kilburn's studio in the McCoy Block in Littleton. The location proved to be too small for their popularity. By 1868, a second larger viewshop was built at the Chutter Block location on Main Street. In 1872, a new factory was built on Cottage Street with more room to expand. Both of these larger viewshops were a block from the Littleton railroad station. Young salesmen carried Kilburn views onto the trains and south to an ever-expanding audience. Today, the site of the third viewshop is a state historic landmark. They quickly became the world's most extensive manufacturer of stereoscopic views.

The business remained family-centered and was largely focused on local subjects and talent. Benjamin's daughter Elizabeth and her husband, William Jackson, were employees who helped to develop the quality product associated with Kilburn views.

Edward Kilburn retired from the partnership about 1877, although the product continued to be identified as Kilburn Brothers until the late 1880s. John P. Soule, a famous stereo-photographer from Washington Street in Boston, was closely associated with the Kilburn Brothers. A significant number of his negatives were shipped to the Kilburn business of Littleton in 1881.