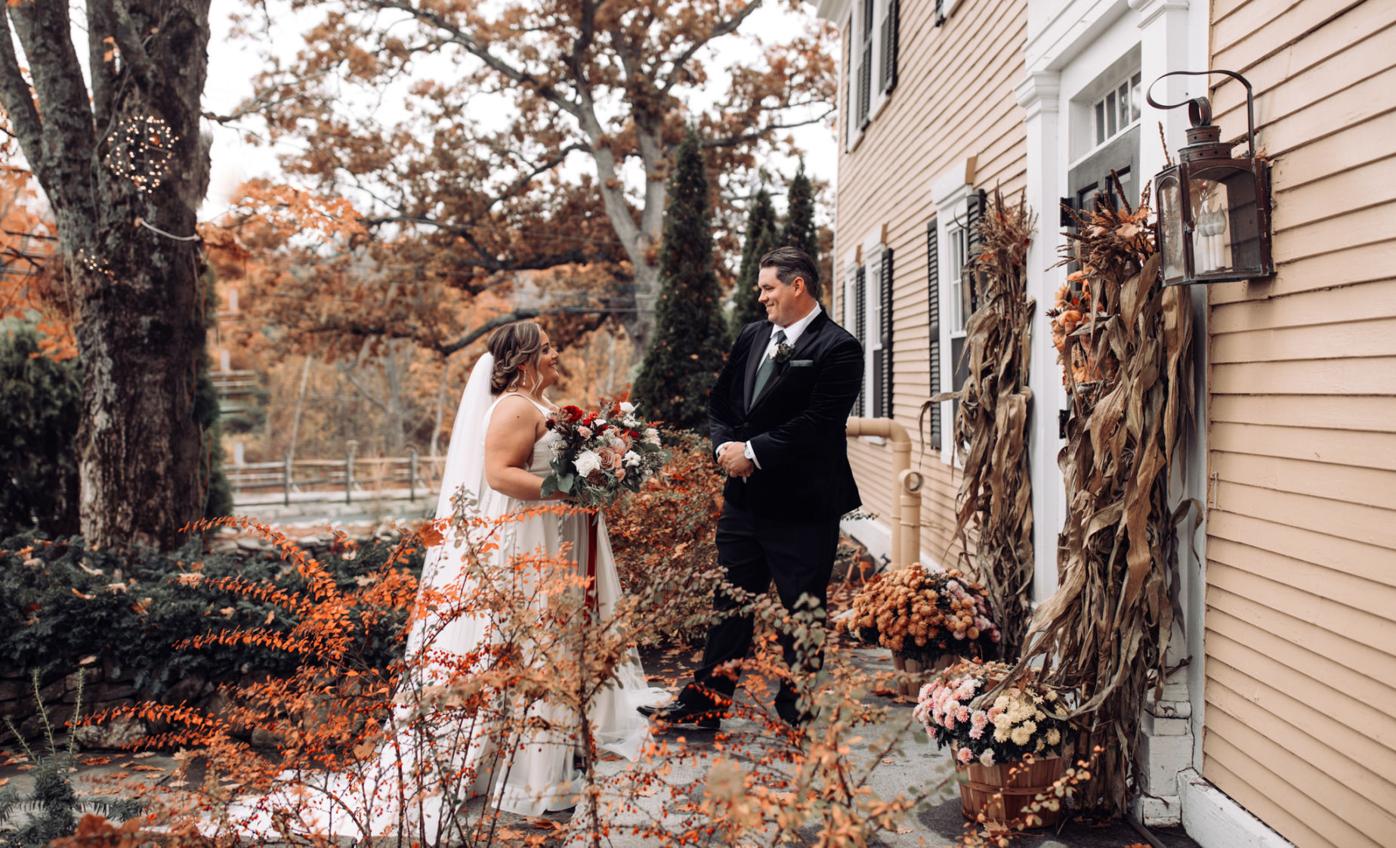 Alison and Chris Pierce celebrated their wedding last fall at the Bedford Village Inn, which reports increased inquiries from Maine, Massachusetts and Vermont because of tighter restrictions in those states. 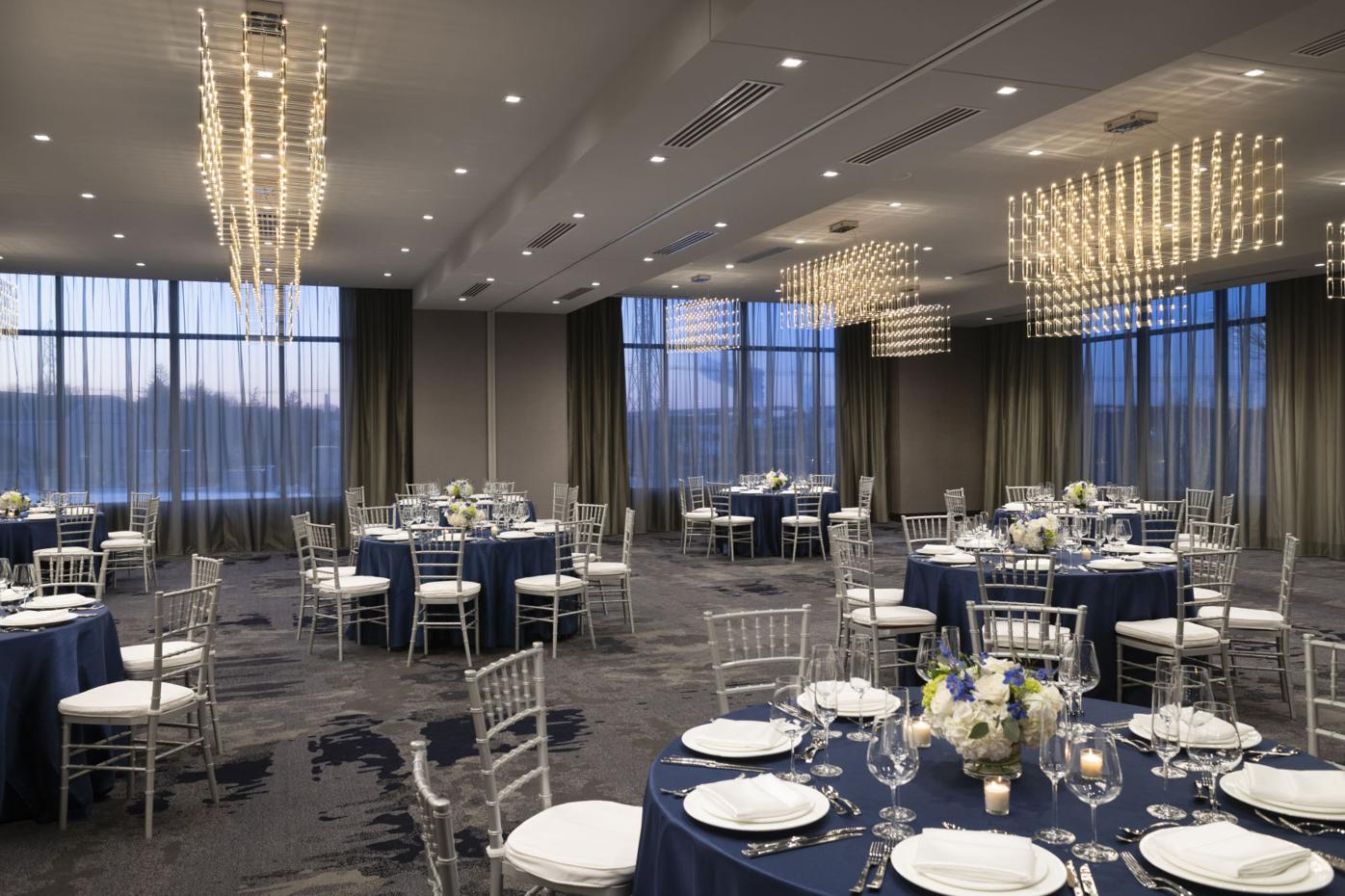 The AC Hotel in Portsmouth’s North End features a ballroom on the third floor that overlooks the Piscataqua River designed to host events for up to 300. (This photo was taken before the pandemic.)

Alison and Chris Pierce celebrated their wedding last fall at the Bedford Village Inn, which reports increased inquiries from Maine, Massachusetts and Vermont because of tighter restrictions in those states.

The AC Hotel in Portsmouth’s North End features a ballroom on the third floor that overlooks the Piscataqua River designed to host events for up to 300. (This photo was taken before the pandemic.)

A FEW MONTHS before the COVID-19 pandemic hit, the AC Hotel in Portsmouth’s North End opened.

The hotel features a ballroom on the third floor that overlooks the Piscataqua River designed to host weddings, special events and corporate meetings for up to 300. The space was used only a few times before the hotel was forced to shut down in March of last year.

Now, Colwen Hotels, which manages the property, is hiring a new banquet manager as interest in everything from baby showers, bar/bat mitzvahs and weddings is on the rise.

“People have put those off for a long time, and they’re anxious to get them back,” said Ron Rockelein, vice president of operations. “We are seeing a big increase in inquiries.”

He said the company is “cautiously optimistic” about getting functions back. The hotel can operate at 100% but must abide by state and Centers for Disease Control and Prevention guidelines.

“Weddings are coming back, although they seem to be smaller in size in terms of the number of people attending,” Rockelein said.

Other function halls and venues across the Granite State are experiencing a similar uptick.

“We are getting the sense there is a great deal of pent-up demand,” said Mike Somers, president and CEO of the New Hampshire Lodging & Restaurant Association.

He said the event industry could see a “pretty incredible year” if vaccinations and consumer confidence begin to return. In the meantime, some are booking outdoor events.

“We are also seeing a fair amount of folks who are willing to move to indoor events as well,” Somers said.

At the Bedford Village Inn, many weddings had to be rescheduled because of the shutdown earlier on in the pandemic. Events can be planned for up to 200 guests.

“We’ve seen a big uptick in just the past few weeks,” said Melissa Quinn-Samaras, sales and marketing director. “It’s more of a positive response from people who want to plan again and get back out there hosting events.”

Many of the smaller events such as birthdays, anniversaries, rehearsal dinners, bridal showers and baby showers continued to book throughout the pandemic because of opportunities to social distance in private dining rooms.

The venue can operate at full capacity, but must offer proper space for social distancing.

“Safety is of the utmost importance here and ensuring that our guests feel comfortable and enjoy their time here with us,” Quinn-Samaras said.

Bookings at the Riverside Room in Manchester’s Millyard have been picking up for the past several weeks, said Keri Laman, owner of Tidewater Catering.

“It’s like someone flipped the switch,” she said. “We have people calling for bridal showers, baby showers, rehearsal dinners and retirement parties.”

So far, three corporate Christmas parties are booked for December.

To accommodate the growth, Laman hired three full-time employees and one part-time worker and is looking to hire three more for the company’s culinary team. Some of the events include cookouts and outdoor gatherings at places like Camp Foster in Bedford, which is run by the Boys & Girls Club of Manchester.

The Puritan Backroom in Manchester has also seen an uptick in bookings starting in late-April, according to general manager Eric Zink.

The events are smaller in numbers and abide by state and CDC guidelines.

Like Tidewater Catering, many places are looking to hire as demand for services increases.

The Flight Center, a restaurant in Nashua, plans to open its second location on South Willow Street in Manchester in April. Like many other restaurants, a section can be rented out for private events.

Seth Simonian, managing partner, said hiring has been difficult across the hospitality industry. He hopes to hire about 100 people.

“One of the toughest things we’re seeing is the additional unemployment benefits being given right now is really causing us to have to evaluate a lot of things,” he said.

The back-of-house positions like dishwashers and cooks are the most difficult to hire. The average wage is $15.50 to $16.50 an hour.

Some places are already booked into September, Somers said.

“What we are hearing for weddings is places are almost overbooked,” he said. “A lot of weddings last year got pushed to this year, and there are still folks who planned to get married this year.”

He expects travel restrictions being lifted will draw more people out.

“We are also hearing there are a fair amount of family reunions where people are trying to get together with family that they haven’t seen for a year or whatever it might be,” Somers said.

The Bedford Village Inn has seen inquiries coming from Maine, Massachusetts and Vermont because of tighter restrictions or previously booked venues have permanently closed.

Others, however, are waiting until most their guests have received vaccinations, she said.

The AC Hotel has 11 event spaces and can accommodate up to 300 guests. The third floor ballroom features a terrace where guests can take in the views.

Rockelein said the company plans to hold mostly scaled-back events — well below the capacity allowed under the latest state guidelines.

“We are going to be a little more cautious as we feel it’s necessary,” Rockelein said. “We aren’t doing everything just because the state says we can.”

Some remain tentative but hopeful as they inquire about future events.

“They’re waiting to see how COVID mandates play out,” he said.