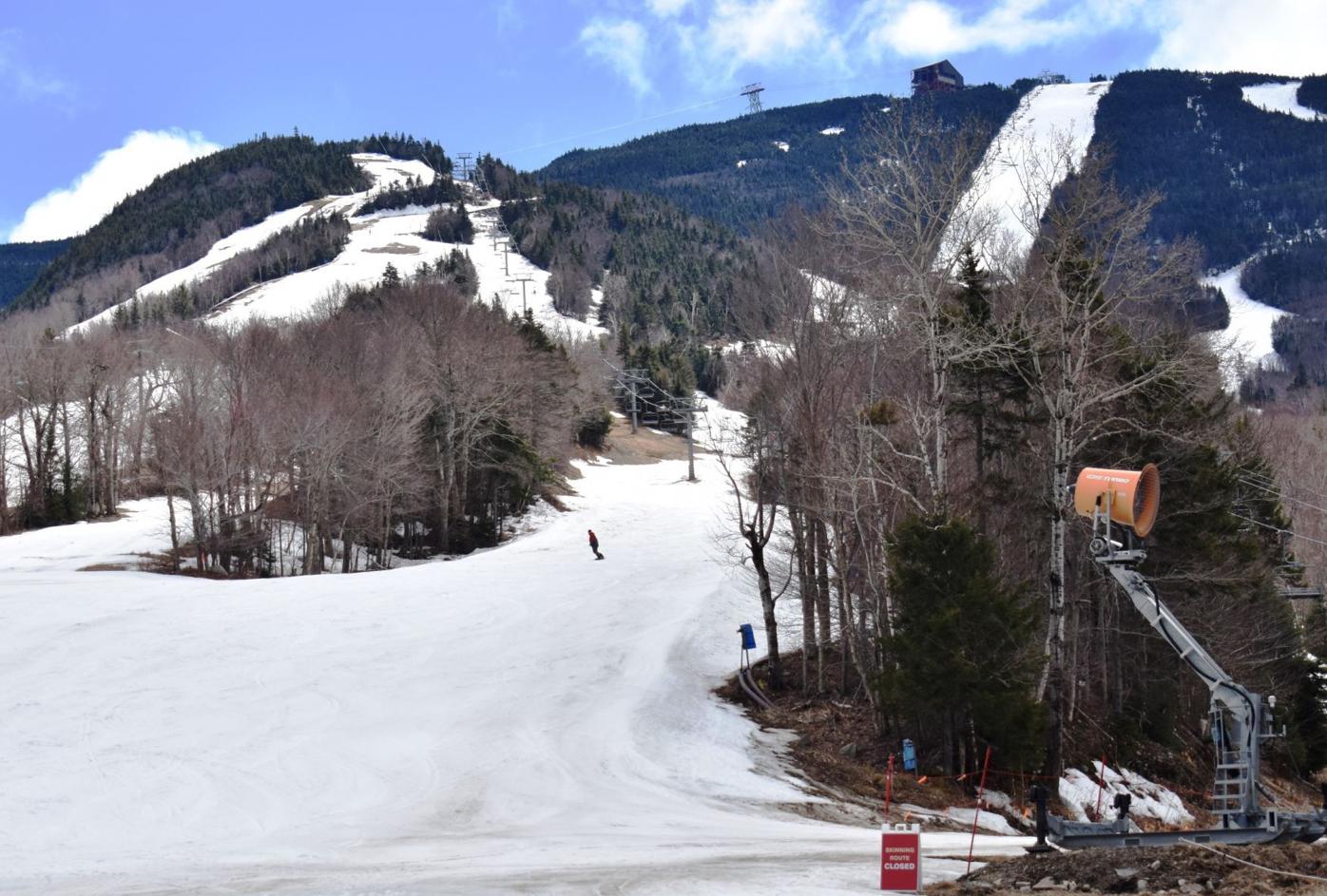 Under sunny skies, skiers and snowboarders got some of their last runs of the 2020-21 season in on Wednesday at Cannon Mountain. The resort, which closed on Sunday, said the season was a successful one, despite challenges posed by the coronavirus pandemic. 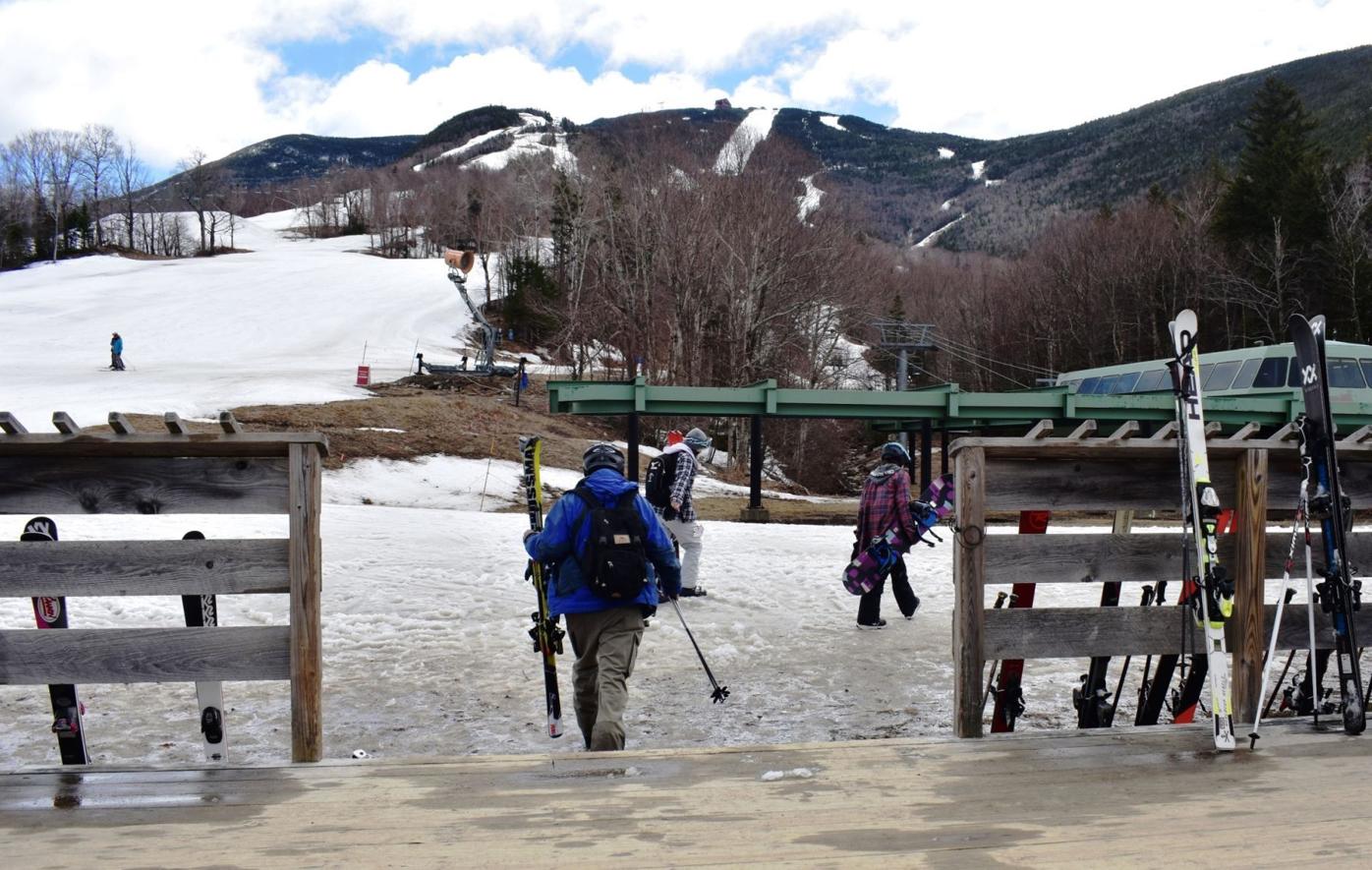 Cannon Mountain is “literally within a couple of percentage points of last year,” said Greg Keeler, the marketing and sales manager at Franconia Notch State Park and Cannon Mountain.

Under sunny skies, skiers and snowboarders got some of their last runs of the 2020-21 season in on Wednesday at Cannon Mountain. The resort, which closed on Sunday, said the season was a successful one, despite challenges posed by the coronavirus pandemic.

Cannon Mountain is “literally within a couple of percentage points of last year,” said Greg Keeler, the marketing and sales manager at Franconia Notch State Park and Cannon Mountain.

FRANCONIA — Some New Hampshire ski areas say the 2020-21 season was not so bad, but they would have preferred something other than the coronavirus as a backdrop.

“Considering that this was the first year that ski areas have ever operated during a global pandemic, I think it’s safe to say that we’re really pleased with how the season went,” said Jessyca Keeler, president of Ski New Hampshire.

Based on reports from several members, Keeler said ridership was up over last season.

“We had actually reached skier visit numbers just over last year’s when we came to that third week in March when everyone shut down last year,” Keeler said by email.

While Ski NH doesn’t track ski area revenues, Keeler said anecdotal information suggests revenue was up for sales of season passes and day tickets, but food and beverage sales were down.

Given that the 2020-21 season started later than usual because of poor weather and that most Alpine ski areas limited the number of daily visitors, Keeler called that accomplishment “fairly remarkable.”

Vail Resorts, whose 37 resorts and ski areas include Mount Sunapee, Attitash, Wildcat and Crotched in New Hampshire, dropped the price of its Epic Pass prices by 20% across the board for next year.

The move makes it “easier for everyone to purchase a pass and, once again, changes everything about how guests access skiing and riding,” said Quinn Kelsey, director of communications and resort marketing for Vail’s Eastern region.

All of Vail’s four ski areas in New Hampshire had successful seasons, she said, with Crotched and Attitash closing on their planned dates and Mount Sunapee and Wildcat scheduled to remain open through Sunday and April 18, respectively, weather depending.

Unlike some other operators, such as Cannon Mountain, Vail is not planning on having a reservation system next season.

“We have extensive learnings from this season around lift loading efficiencies and are implementing new strategies to improve the guest experience and reduce any wait times,” Kelsey said.

Greg Keeler, marketing and sales manager at Franconia Notch State Park and Cannon Mountain, which closed Sunday – said Cannon is “literally within a couple of percentage points of last year and the 10-year average, and we’re pretty happy about having gotten to that place and doing it as safely as possible.”

Cannon’s strong showing came even with the resort limiting the number of tickets it was selling, especially on weekends, said Keeler, who is married to the Ski New Hampshire president.

Because of demand, including during midweek, Cannon reduced the number of its discounted ticket products, which he credited to being one of the things that let Cannon make money.

Some of Cannon’s new visitors this season took advantage of the Indy Pass, a national product that linked independently-owned resorts as an alternative to Vail’s Epic Pass and the Ikon Pass, which includes Loon Mountain.

Food concessions took a hit at Cannon this season, but Keeler said he was surprised that “for the most part, people really, actually did everything we asked them to do between straying apart, not being in big groups and wearing a mask.”

Cannon is cautiously optimistic about next season.

“Some of these COVID things (such as online reservations) may kind of translate into normal operating conditions,” Keeler said.

Louise Smith, communications manager at Loon, said limited ticket sales this past season helped to promote social distancing and aid in guest safety. While overall visits were down, “there was a large demand for daily tickets throughout the season with many days selling out well in advance,” she said.

Like other resorts, Loon operated its lodges at reduced capacity.

“As the season progressed, we found the balance that worked for us, and our guests definitely appreciated the options available for their comfort levels,” Smith said. “As well as offering outdoor and limited indoor dining, grab-and-go services were available should guests wish to return to their cars.”

Thomas Prindle, the director of marketing at King Pine Ski Area/Purity Spring Resort/Danforth Bay Camping & RV Resort, said both skier visits and revenues were “decent,” despite the latter being reduced by capacity limitations.

The season was challenging because of the pandemic, but the resort “introduced and learned some things this season operationally, like introducing outside ticket windows, adjusting base lodge use policies, and other departmental efficiencies and online processes, that we’ll likely consider continuing,” Prindle said.