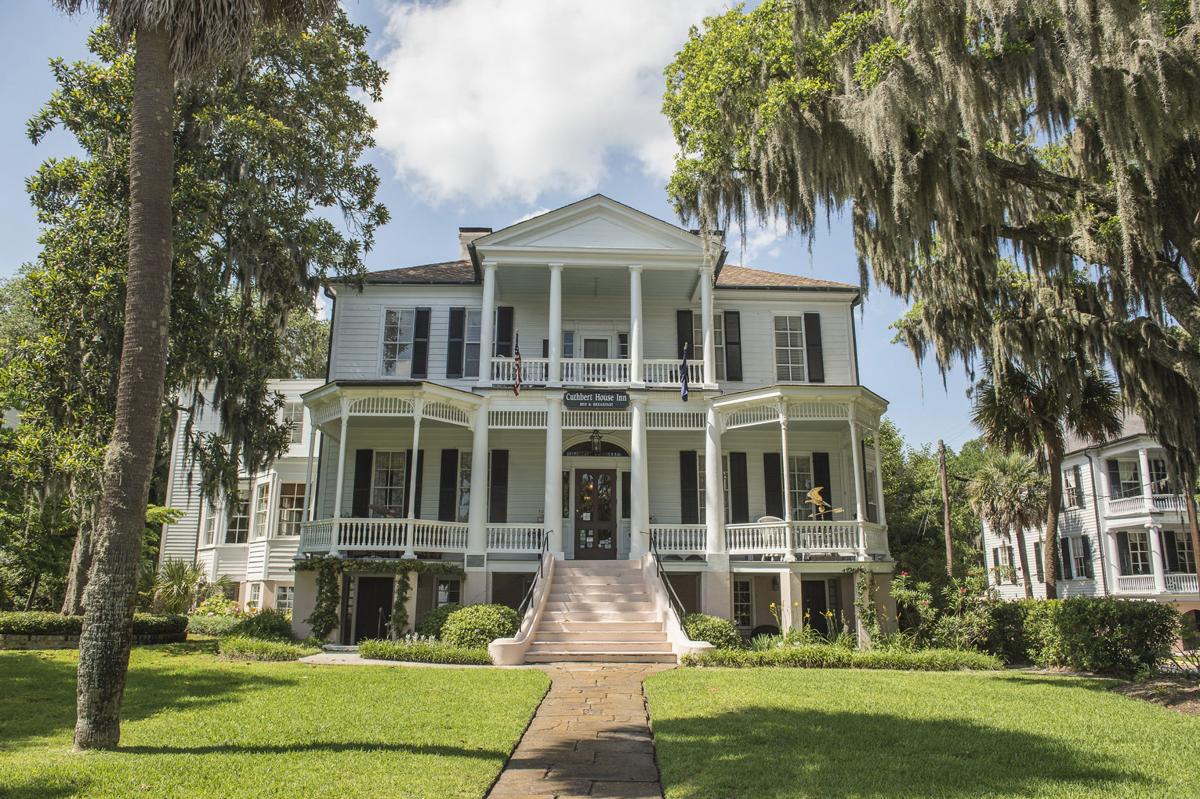 Beaufort’s downtown, with its antebellum mansions, has been named a National Historic District. 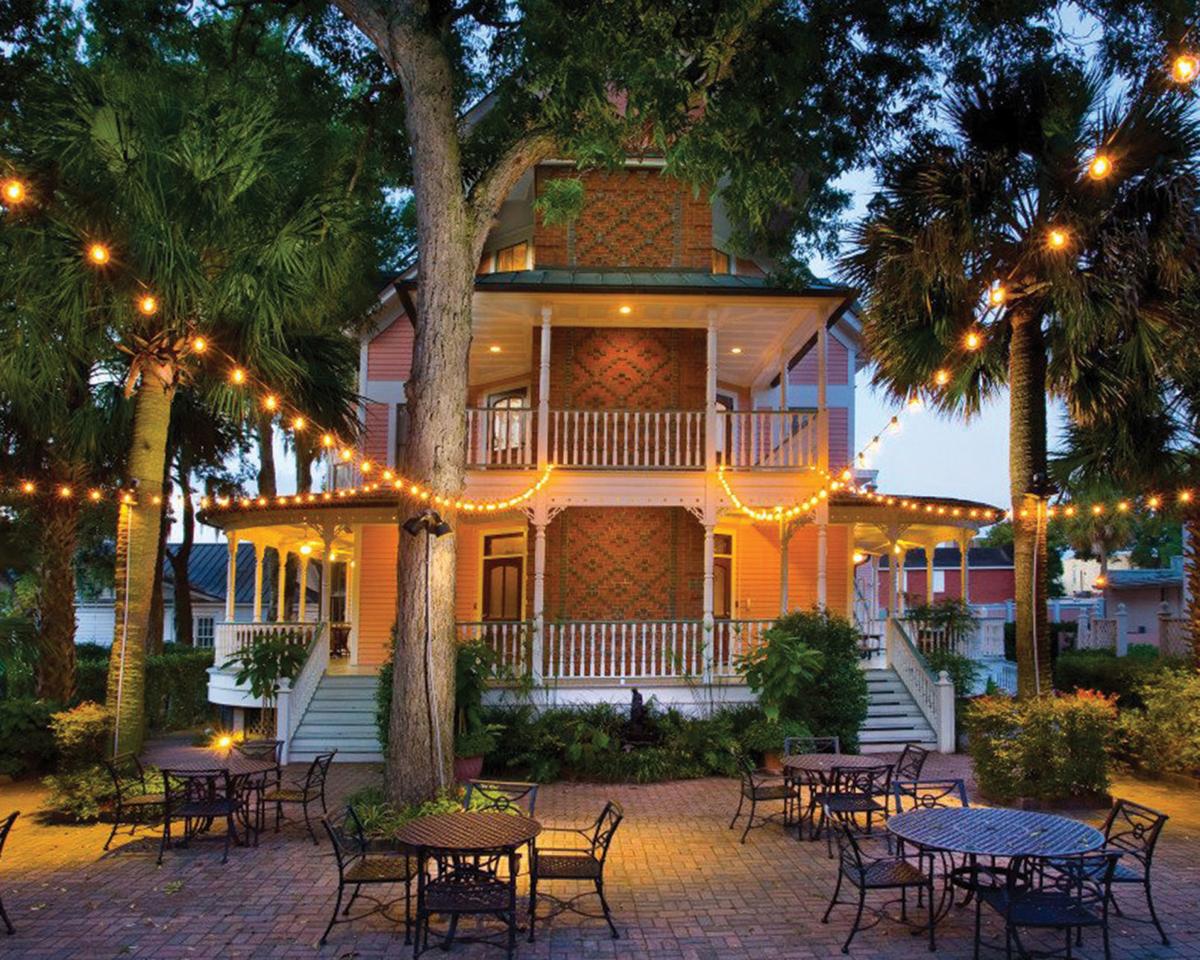 The Beaufort Inn is one of the city’s most picturesque small inns. 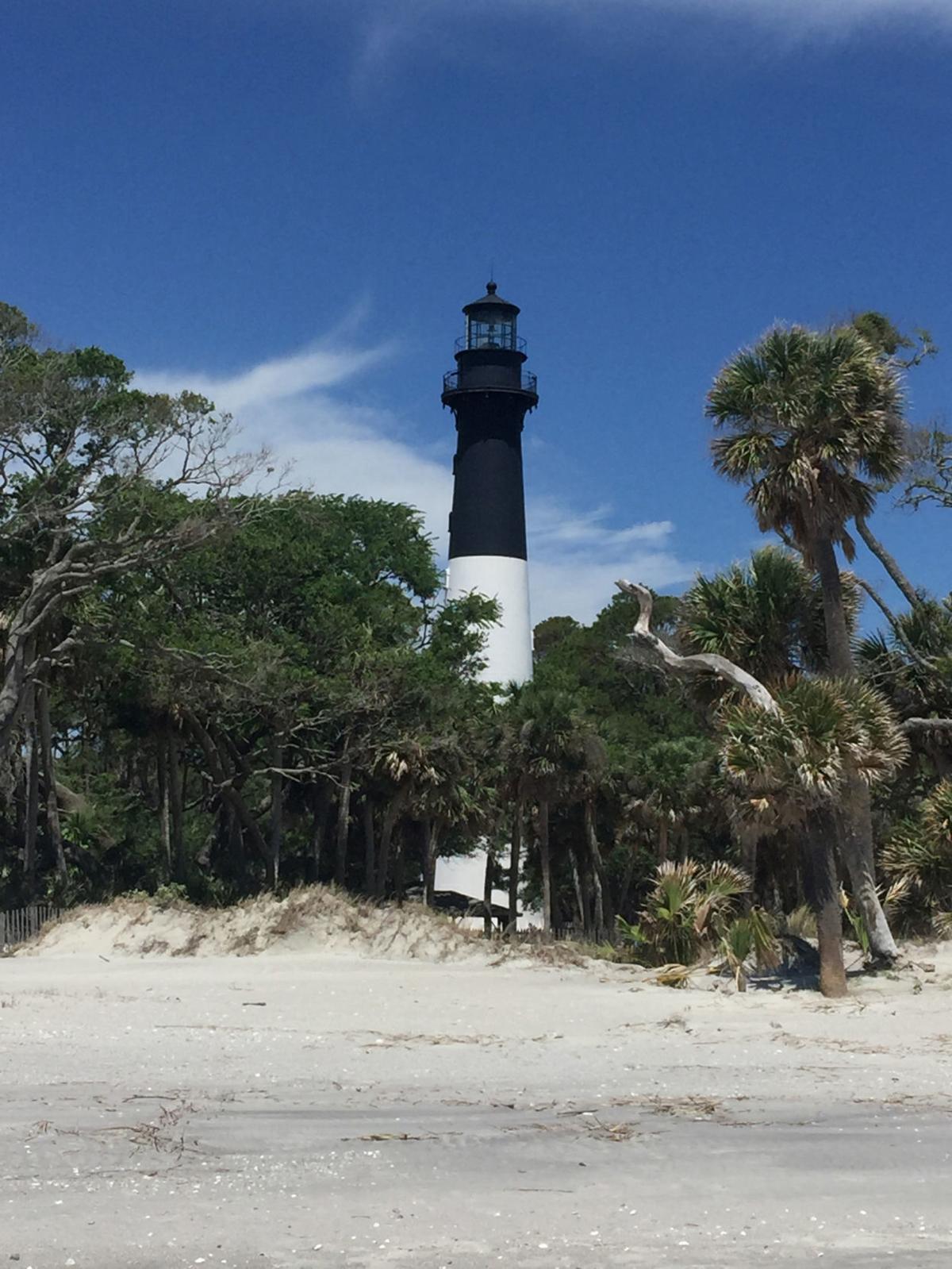 The lighthouse at Hunting Island State Park is the only lighthouse in the state accessible to the public. 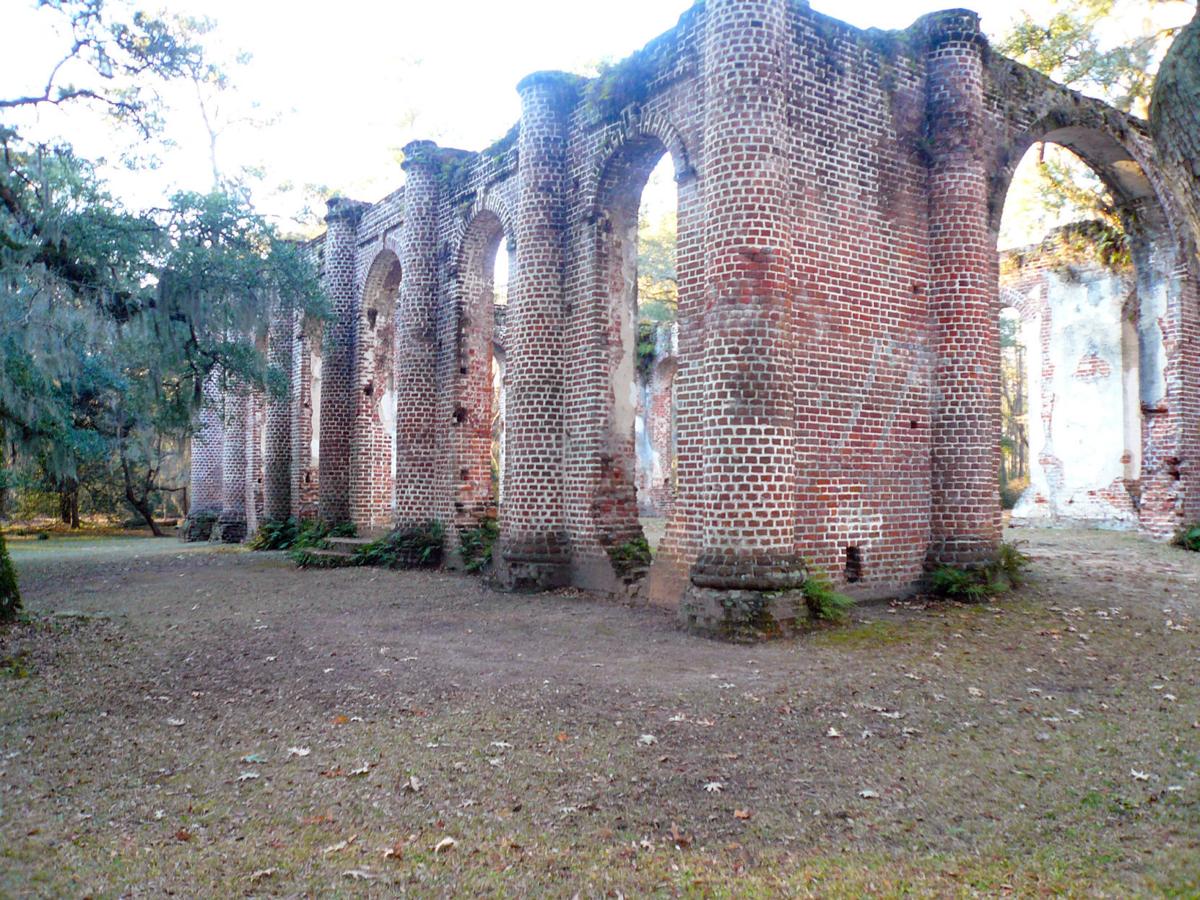 The Old Sheldon Church — now in ruins — was the first attempt in America to replicate a Greek temple. 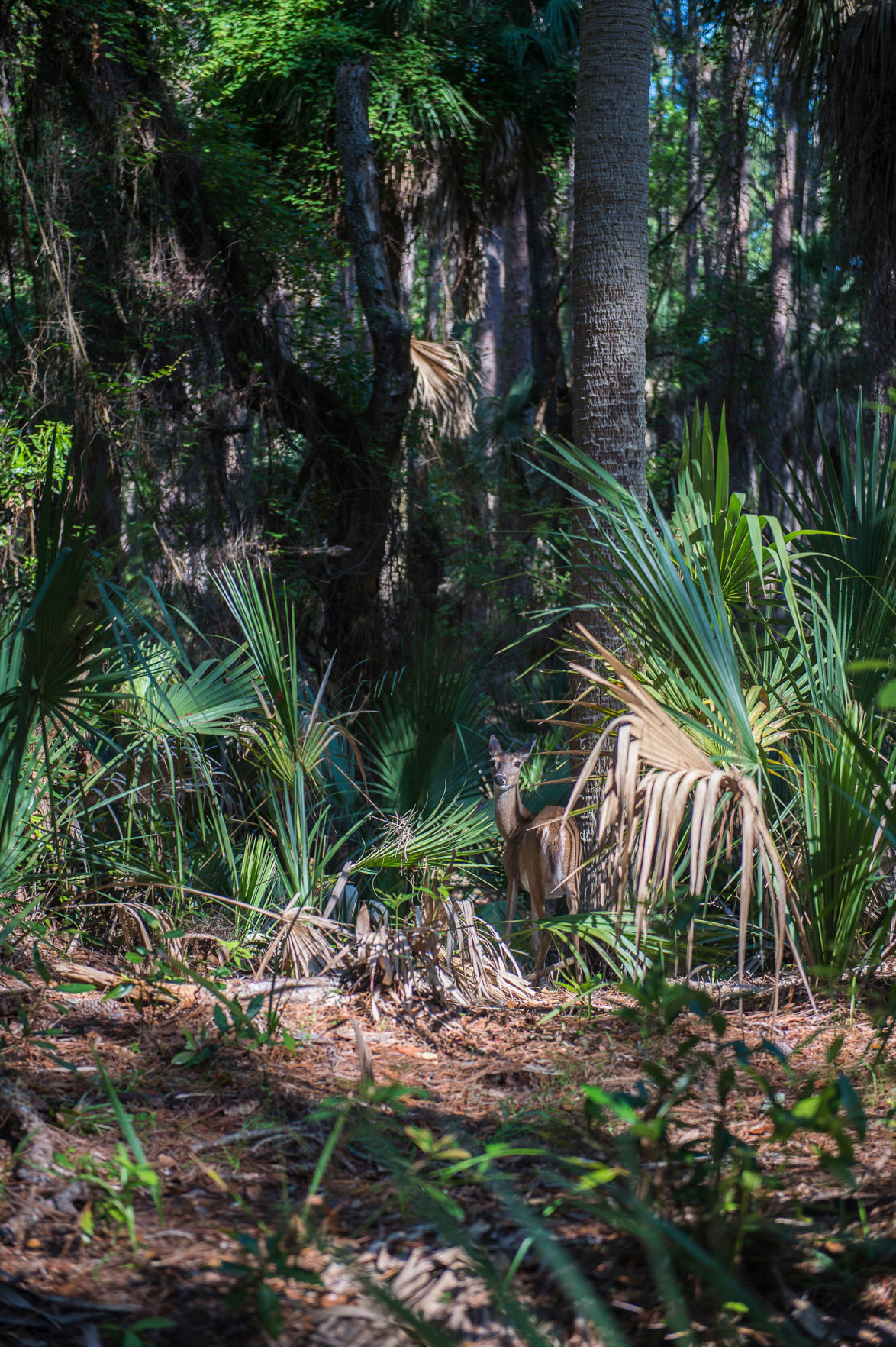 This mangrove swamp is one of two ecosystems found in Hunting Island State Park, with the other being a coastal inlet.

BEAUFORT, S.C. — The “Great Skedaddle” proved the salvation of Beaufort, the jewel in the crown of South Carolina’s Low Country. Following the 1861 firing on Fort Sumter in Charleston, which precipitated the Civil War, the entire state was under siege. Beaufort, just 70 miles south of Charleston, was at particular risk.

The city’s residents — believing the war would be over in a month or so — buried their silver and skedaddled, planning to return and take up their lives when it was all over. Four years later they returned to find their livelihood gone and their beautiful mansions lost to unpaid taxes.

The good news was that the mansions, thanks to the largesse of the Union army (and the fact that the populace had not put up a fight) remained intact and today’s visitors can marvel at a town whose center is almost entirely antebellum.

Street after street of these mansions — adorned with white columns and surrounded by stately oaks dripping with Spanish moss — elicit “ooohs” and “aaahhs.” The best time to truly experience them is during the Fall Festival of Houses & Gardens (in 2020 scheduled for Oct. 23 through 25.)

Tours provide access to three centuries of architectural splendor in an area designated as a National Historic Landmark District. Houses on the 2019 tour included one with a history and one with a heart-warming story.

The Secession House holds an important role in South Carolina history as it was here that the first meeting was held to discuss the state’s secession from the Union a decade before the onset of the Civil War.

The Henry McKee-Robert Smalls House was named to honor both McKee, the original owner, and Smalls, the son of one of McKee’s house servants. After gaining his freedom, Smalls purchased the house and magnanimously provided a home for his former master’s widow until her death.

Tied to the water

The festival showcases Beaufort’s charms, but any time is a good time to visit this beautiful city, located on Port Royal, one of South Carolina’s coastal islands. Some 60% of Beaufort County is water, and the town sits on the Beaufort River, a tidal arm of the Atlantic.

Get a sense of how the water defines the land on one of Captain Dick’s river tours aboard the Prince of Tides, while learning about the area’s wildlife and ecology.

Spartina, a tall marsh grass that grows prolifically, lines the riverbanks; Oystercatchers, birds with rosy red bills, patrol beds of sun-bleached oyster shells, awaiting their next meal, and the mud flats — visible at low tide — are home to an army of fiddler crabs.

While on board, you’ll also hear stories about the pirates and rice and indigo planters who called this exotic locale home.

Sailing on a boat named the Prince of Tides can’t help but put one in mind of the Low Country’s literary patron saint, Pat Conroy. The author of “The Prince of Tides,” “The Great Santini” and “The Lords of Discipline” served the area as a teacher, mentor, advocate of Low Country life and friend to anyone with a story to tell.

Get a peek into his life — both public and private — at the Pat Conroy Literary Center, and then visit his grave at the tiny cemetery on nearby St. Helena Island. Conroy is the only white to be buried in the cemetery, requesting burial here as a measure of his respect and love for the Gullah people.

Just a short walk from the center is the charming Beaufort Inn. Some of Beaufort’s most beautiful houses have been turned into small inns and bed-and-breakfast accommodations, and this is one of the best. With its lush gardens, sweeping verandas and rocking chair-lined porches, it is the very essence of Southern hospitality. The hotel’s 48 rooms are in both the main house and in cottages facing the gardens and courtyard.

If you want a true Southern experience, book dinner on the upstairs veranda of the Anchorage 1770 Inn. With a glass of champagne in hand, toast the sunset as the sun slowly sinks into the bay, creating a landscape portrait in shades of gold, orange and vermilion.

The food comes from the Low Country’s bountiful larder and the genuine hospitality comes from the inn’s owners Frank and Amy, transplanted Atlantans who take it as a personal affront if their guests don’t enjoy themselves.

For a unique perspective on Beaufort, listen to what Peach Morrison, director of the Lowcountry & Resort Islands, has to say. She likens it to one of three Southern sisters — Charleston, S.C.; Savannah, Ga.; and Beaufort. Charleston, says Morrison, being the oldest, is very well-established and sure of her charms. Savannah, the youngest, is beautiful, a bit wild and loves to party. Then where does that leave Beaufort?

“Beaufort is the middle sister,” says Morrison. “She’ll get in the truck, back the boat in the water and go get shrimp for dinner — but she won’t do it without putting her pearls on first.”

As if Beaufort alone doesn’t have enough to offer, the surrounding Low Country — with its mélange of Southern, Native American, European, Caribbean and African cultures — is a veritable smorgasbord of sights, sounds and most especially, tastes.

In Yemassee, the ruins shrouded in Spanish moss visible from the road are those of Old Sheldon Church, built between 1745 and 1753 and thought to be the first conscious attempt in America to model a building after a Greek temple. The church was burned in 1865 by Union Gen. John Logan and never rebuilt. Today, its ruins stand as a haunting testament to the ravages of war.

Detour to Hunting Island State Park, South Carolina’s most visited park, and see how two ecosystems come together — 3,000 acres of marshland complete with saltwater lagoon and an ocean inlet with five miles of uncrowded (in October) beach.

If you have the energy, climb the 167 steps to the top of the lighthouse — the only publicly accessible lighthouse in the state — for a panoramic view of the Atlantic and surrounding maritime forest.

If you don’t, just relax against a palmetto tree and listen to the swamp denizens conduct their continuous symphony.

Save a day for exploring Walterboro, referred to as the “Front Porch of the Low Country.” If you arrive early enough, stop for breakfast at the Old Bank Christmas & Bakery. If that sounds incongruous, that’s because it is. The Bakery, with the fluffiest biscuits I’ve had lately, is tucked away in a corner of one of the largest Christmas gift shops in the South.

Tour the Bedon-Lucas House, one of Walterboro’s five remaining “high houses.” The flooding of nearby fields for the cultivation of rice made it necessary to raise the houses off the ground. The interior is well preserved with the original heart of pine floors.

Be sure to spend some time at the South Carolina Artisans Center. Designated as the official state folk art and craft center, it features the work of 300 of South Carolina’s finest artists and master craftsmen.

If you’re craving some quality beach time, there’s no better spot than Edisto. This sandy paradise is the yin to Myrtle Beach’s and Hilton Head’s yang — a family-oriented community where spacious beach houses (many of them available for rental) take the place of high-rise hotels, and where the homey SeaCow Eatery is the popular gathering spot for locals.

The beach is so pristine that not only is it a favorite of visitors, but of loggerhead sea turtles as well, who come here to nest.

One can’t talk about the Low Country without mention of its signature cuisine. While that cuisine is related to more generic Southern cooking, because of the area’s racially mixed population, it has ties to Creole and Cajun food.

Because it grows prolifically here, rice is the staple of many dishes such as gumbo and Hoppin’ John (a side dish of rice, peas, chopped onion and sliced bacon). She-crab soup is a must, while the hearty concoction known as Frogmore Stew, similar to the Louisiana seafood boil, is substantial enough to satisfy even the most voracious appetite.

If you’re looking for some Low Country atmosphere to go with your Low Country menu, check out the Foolish Frog. Overlooking a saltwater marsh on St. Helena Island, it’s the place to go for local oysters (fried or on the half shell) and the always popular shrimp basket.

In Edisto, book a table at Ella & Ollie’s, which compares favorably to the sophisticated dining establishments in Charleston. That should come as no surprise since Chef Brandon Rushing came from Charleston’s Blossom Restaurant to open his farm-to-fork spot in this beach community.

There are reasons galore for visiting Beaufort and the Low Country — the beaches, the marshes, the food, the Revolutionary War and Civil War history, the literary heritage and the Southern hospitality. You’ll probably want to do it all. The one thing you won’t want to do is skedaddle. Stay a while and enjoy all this unique region has to offer.