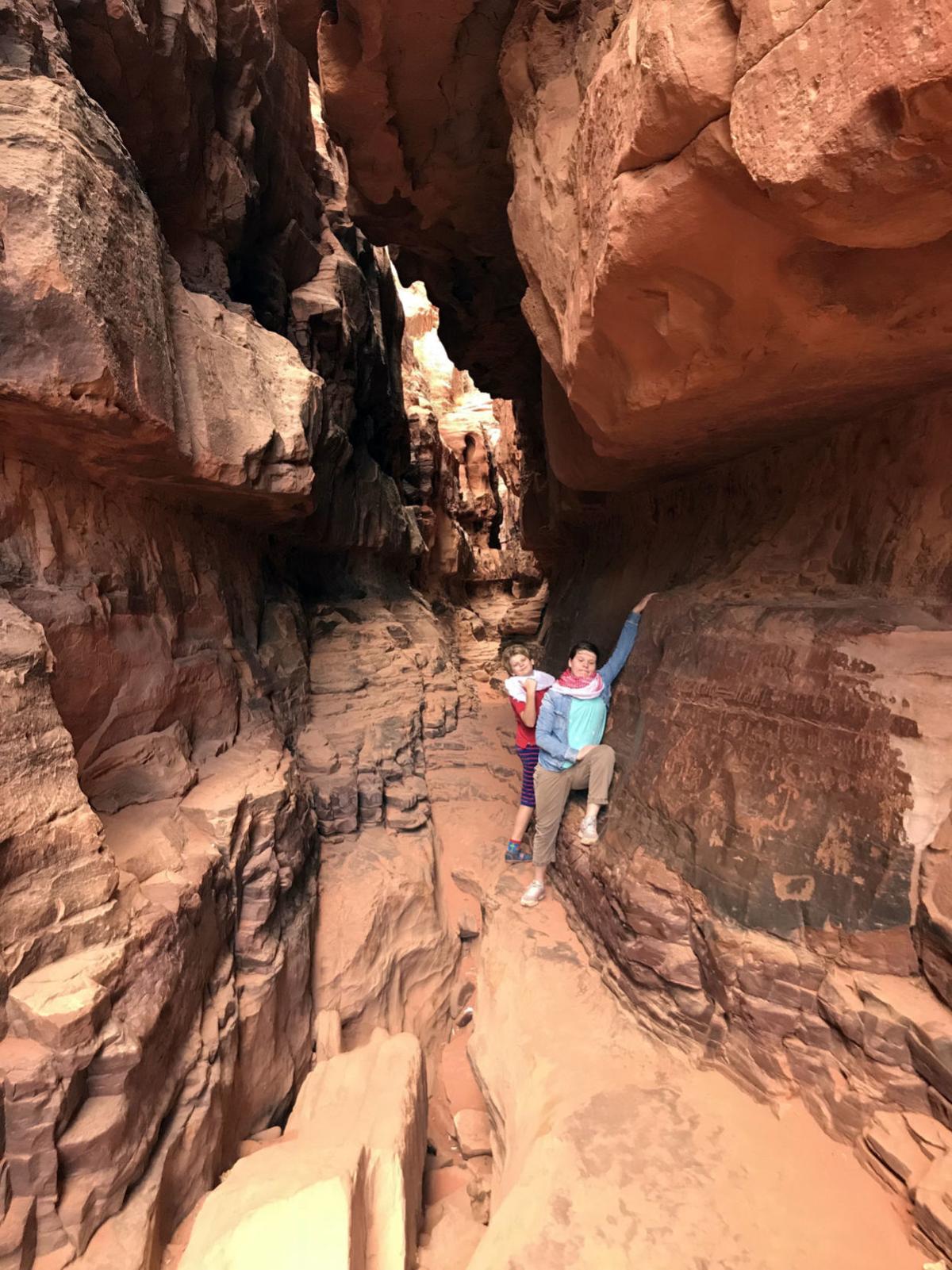 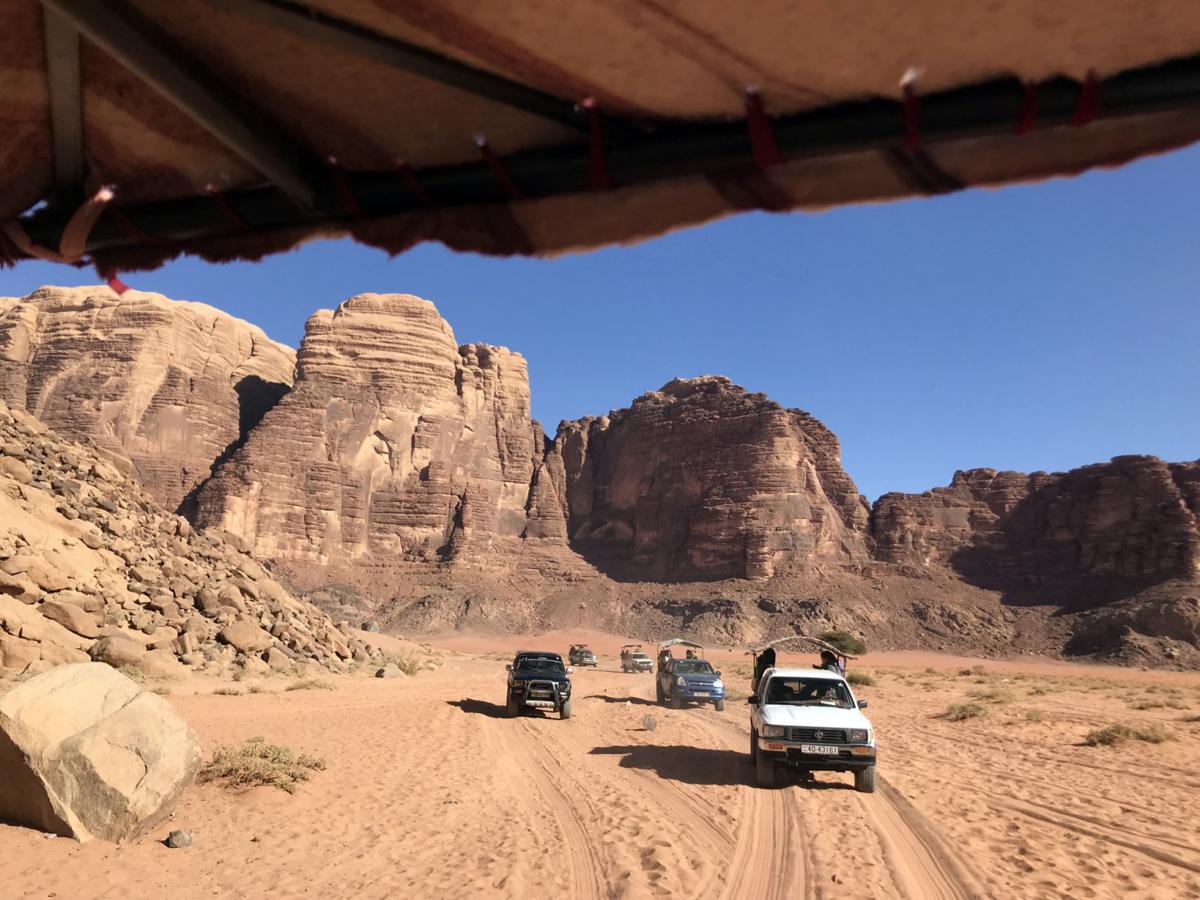 Vehicles take off for a tour of the Wadi Rum desert; the excursions include stops to hike along the way. 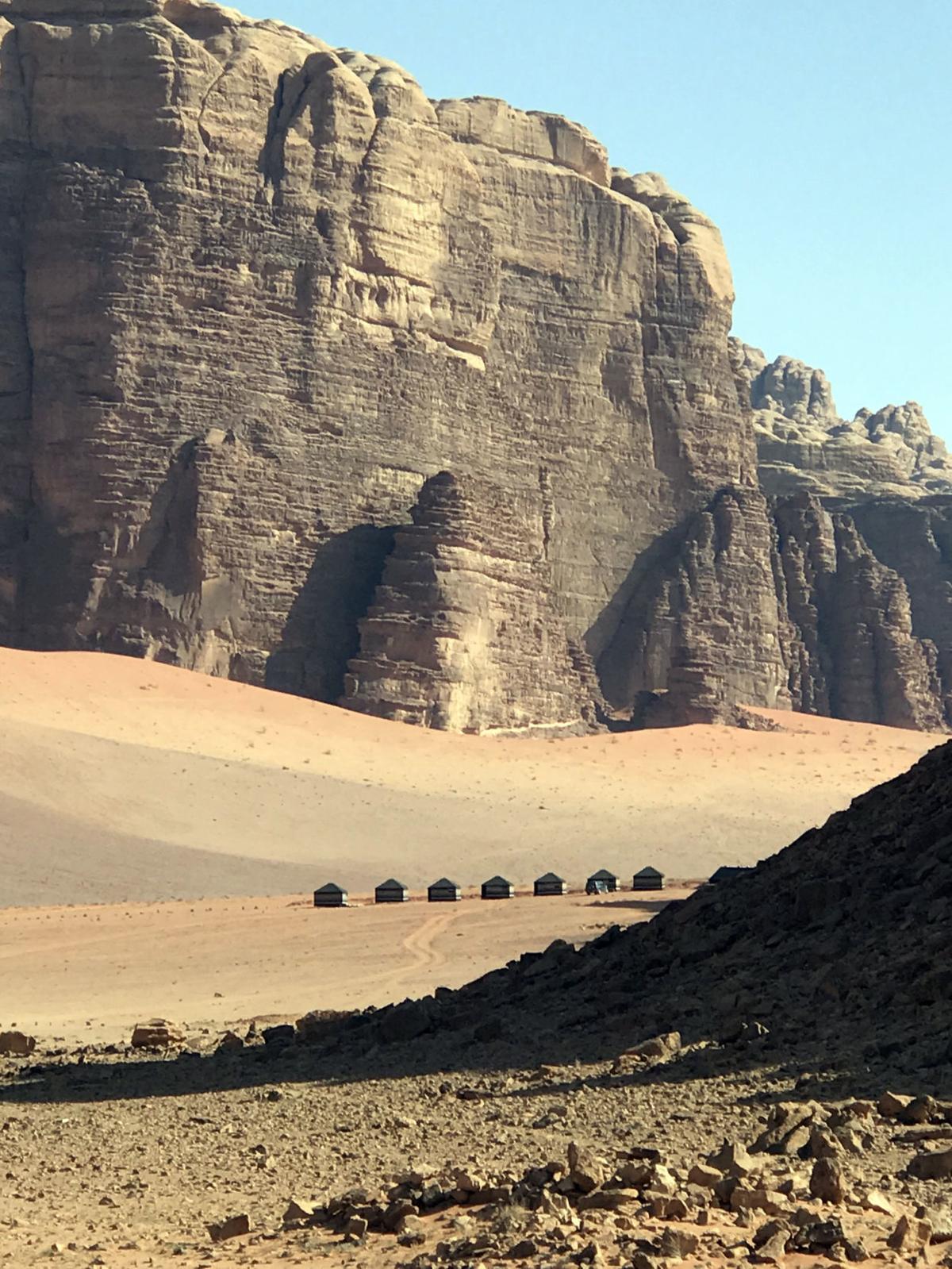 Bedouin camping tents are set up at the base of cliffs in Jordan’s Wadi Rum desert, where many movies have been filmed.

In a trailer for “The Rise of Skywalker,” the “Star Wars” movie that opens Friday, we see Rey racing across a desert landscape, light saber in hand, trying to outrun a spacecraft. The landscape looked familiar to me, and for good reason: I had visited this dramatic desert on vacation in Jordan. Wadi Rum is just four hours south of Amman.

After a long, flat and mostly unremarkable drive on the Desert Highway, you arrive at the crest of a hill to behold this remarkable site, also called the Valley of the Moon. It feels like you’ve landed on another planet.

Petra is widely known as the crown jewel of Jordan, but for adventure seekers, Wadi Rum is the star. From the enormous red, pink and brown sandstone cliffs rising up out of the sandy desert floor, it’s readily apparent why this place has earned starring roles as Mars in 2015’s “The Martian”; as the fictional city of Agrabah in 2019’s “Aladdin”; and, of course, as the fictional planet Pasaana for the final Skywalker installment.

As far back as “Lawrence of Arabia” in 1962, filmmakers have flocked to this site for its magnificent scenery. For tourists, Wadi Rum also offers a chance to experience the traditional Bedouin culture of southern Jordan.

I had never heard the term “wadi” before arriving in Jordan: It refers simply to a valley carved by water. But Jordan is famous for its wadis, most of which are narrow canyons that provide great hiking and an escape from the sun. Wadi Rum is vast, the largest in Jordan, taking up 280 square miles, nearly the area of New York City, and extending south to Jordan’s border with Saudi Arabia.

A stay at a Bedouin camp

Day trippers can spend a few hours taking a jeep ride through Wadi Rum with stops to hike and scramble over rocks along the way. But it is the experience of staying in one of the many Bedouin-run camps that is truly unforgettable.

In planning our November visit, we were overwhelmed with the number of options for camps (more than 70) and were briefly tempted by the fancy biodome-style camps (some with air conditioning and hot tubs) that have invaded Wadi Rum in recent years. We would later learn that the locals do not look kindly on these establishments, as they are not locally owned. But after looking through websites and reviews, we ultimately opted for a traditional camp, aptly named Wadi Rum Bedouin Camp.

Once we had made our reservation, the owner, Mohammed, who was born and raised in Wadi Rum, emailed us instructions to arrive at the Rum Village Rest Stop by 2 p.m. There, we would meet our guide for a jeep tour of desert highlights before heading to the camp for the evening.

A row of four-wheel-drive pickup trucks were at the entrance to the rest stop. We slowed to a stop, rolled down our window and spoke to the first driver we saw. “We’re here for Bedouin camp,” we said cautiously.

“Yes, I’m Mohammed’s cousin. He told me to come meet you. Come with me.”

Carrying only what we needed for the day and overnight, the six of us climbed into the back of the truck, which was outfitted with a shade cover, ready to explore. Our driver wore a traditional dishdasha, a long white robe, with a red-and-white scarf, the traditional kaffiyeh, atop his head. We had purchased similar scarves for ourselves at a highway rest stop, and it did not take long for us to see how essential they would be in the desert.

We would meet many of Mohammed’s other relatives during our stay in the camp — the camel herder, the cook and others who popped in and out of camp with various messages and supplies. These extended Bedouin families all used to live a nomadic life in traditional goat-hair tents within the confines of the Wadi Rum protected area, herding goats and camels.

But as wealth from tourism has spread through the community, many have moved to cement houses in the town of Rum just outside the park boundary. Mohammed later told us there are now just five Bedouin families still living the traditional lifestyle in the desert.

We opted for a two-hour tour, although with the vastness of Wadi Rum you could easily spend more time. Soon after we started our bouncy drive into the desert, we were all reaching for the grab bars and pulling out our scarves to keep errant hair and swirling sand out of our eyes. It’s an exhilarating drive, and the kids in our group were certain they’d just boarded the best amusement park ride ever.

We had time to properly adjust our scarves at the first stop on our tour — the Lawrence Spring, supposedly where British officer T.E. Lawrence (Lawrence of Arabia) camped during the great Arab Revolt of 1917-1918 and where today’s Wadi Rum camels rest and replenish their reserves with the spring water. It was Lawrence’s time here that first drew Western tourists to Wadi Rum, although inhabitants date to prehistoric times.

Next, we were driven to a narrow gorge, where we ascended a few sandstone steps and entered a cramped passageway where ancient Nabatean inscriptions dating back more than 12,000 years are well-preserved on the canyon walls. These symbols and images of animals and humans are thought to be evidence of one of the earliest alphabets.

From there, we began the heart-pumping — and heart-stopping — stage of the tour. We drove down to the base of a gigantic red sand dune dotted with a mix of children running to the top and adults slogging through the sand. At varying speeds, our group eventually made it to the top, and we were rewarded with a magnificent 360-degree vista.

(Note to self: Don’t wear white on the next visit to Wadi Rum. We would find red sand in our shoes and bags for the next week.)

Our next stop was hyped as a must-have photo op: a natural rock bridge with an ascent that provided another adrenaline boost. Our guide scampered up the slippery slope of rock effortlessly with the children as the adults in our group ascended on hands and feet, certain we were about to slide to our deaths.

The remainder of the tour was, thankfully, passive sightseeing — with the exception of one final treat for the kids. Turning around from the driver’s seat, our driver did a quick visual assessment of our group and made the executive decision that we might enjoy a little drag racing with another guide. He was only half right, as the children giggled with glee, bouncing around in the back of the pickup, while the moms screamed in a mix of horror and delight.

Soon enough, we arrived at the camp and were shown to our tent. Our host proudly pointed out the thick cotton quilts his mother had made and then guided us to the recently upgraded men’s and women’s bathrooms. Showers were available, but upon learning that water must be trucked to the camp each day, we decided to pass.

We joined the other guests in the central dining tent, where we had traditional Bedouin tea with local herbs (sage, thyme and rosemary) and a healthy dose of sugar. After, we were encouraged to climb up onto the cliffs behind the camp to view the sunset. Ooohs and ahhhs echoed from the cliffs as the desert took on the rich hues of the setting sun. The sky was filled with opaque pinks and reds and oranges as the light reflected off the dust in the desert air, before the sun finally sank beneath the horizon.

We clambered back down to the camp for dinner and gathered in a circle as the cook and his helper dug in the sand to reveal the handle of a large pot. After carefully clearing away the sand, they pulled out a traditional meal of zarb — lamb, vegetables and rice — that had been cooked underground, Bedouin-style. We ate this along with Middle Eastern mezze (hummus, olives and eggplant dip) and salads.

Tired and with full bellies after a long day, we headed back to our tents. But the desert had a bonus in store for us: the night sky, glittering with seemingly tens of thousands of stars. In my most remote travels away from the light pollution of cities, I’ve never seen such a sight — a perfect way to end our visit to this magical landscape.

We were in for yet another surprise in the morning. At breakfast, we were startled to hear deep grunts and groans, which turned out to be camels waiting to take us back to our car. For most of us, this was the first time riding a camel, and our hosts obliged us, somehow stifling their laughter, as we climbed up and captured the experience on video to show friends back home. Once we were safely mounted, the slow walk back to town was the perfect way to take in the last glimpses of Wadi Rum.

This family-run option for tent lodging and jeep adventure tours is led by local guides. Traditional basic tents about $49 per night for adults, about $28 for children under 12, free for children under 3. Dinner, breakfast and transportation to village included. Deluxe double tent with private bath about $282 per night. Half-day jeep tours about $84 per person for one, about $42 each for two, about $28 each for three, about $21 each for four to seven people.