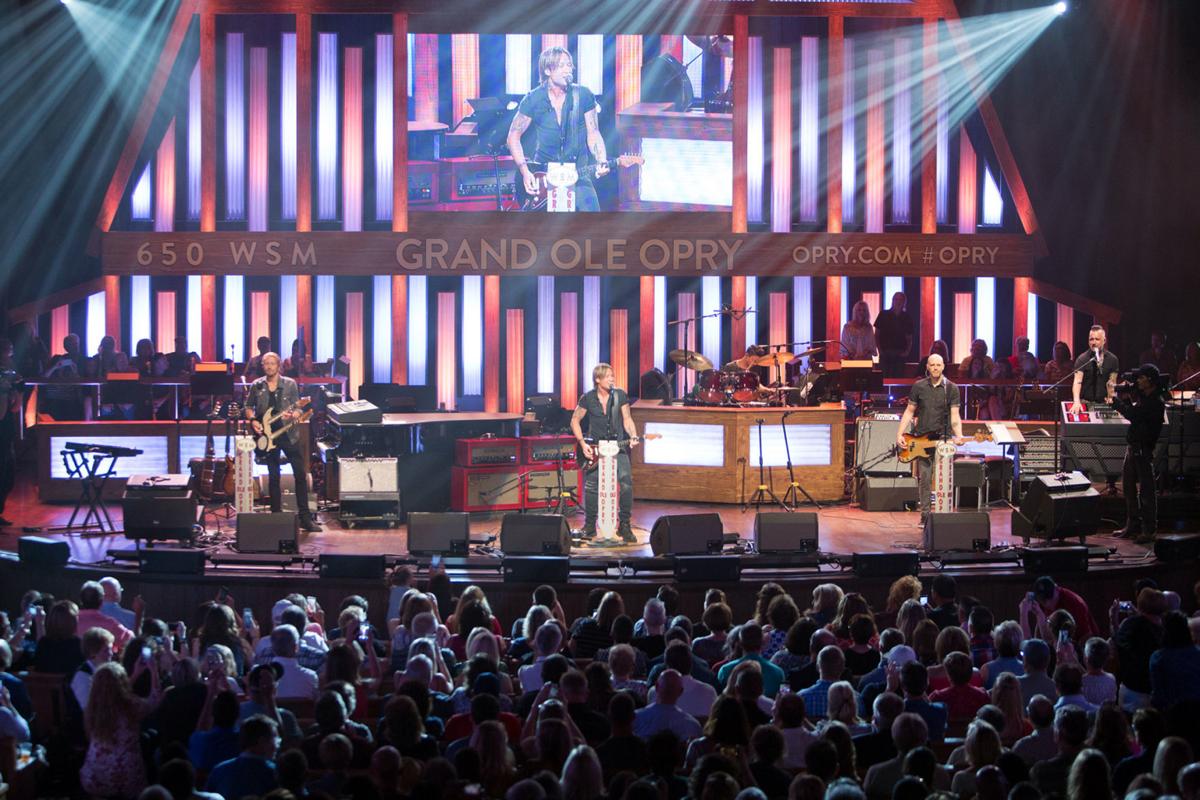 Keith Urban performs at the Grand Ole Opry in Nashville, Tenn. The Opry has been around since 1925 and moved to its current location in Opryland USA in 1974. 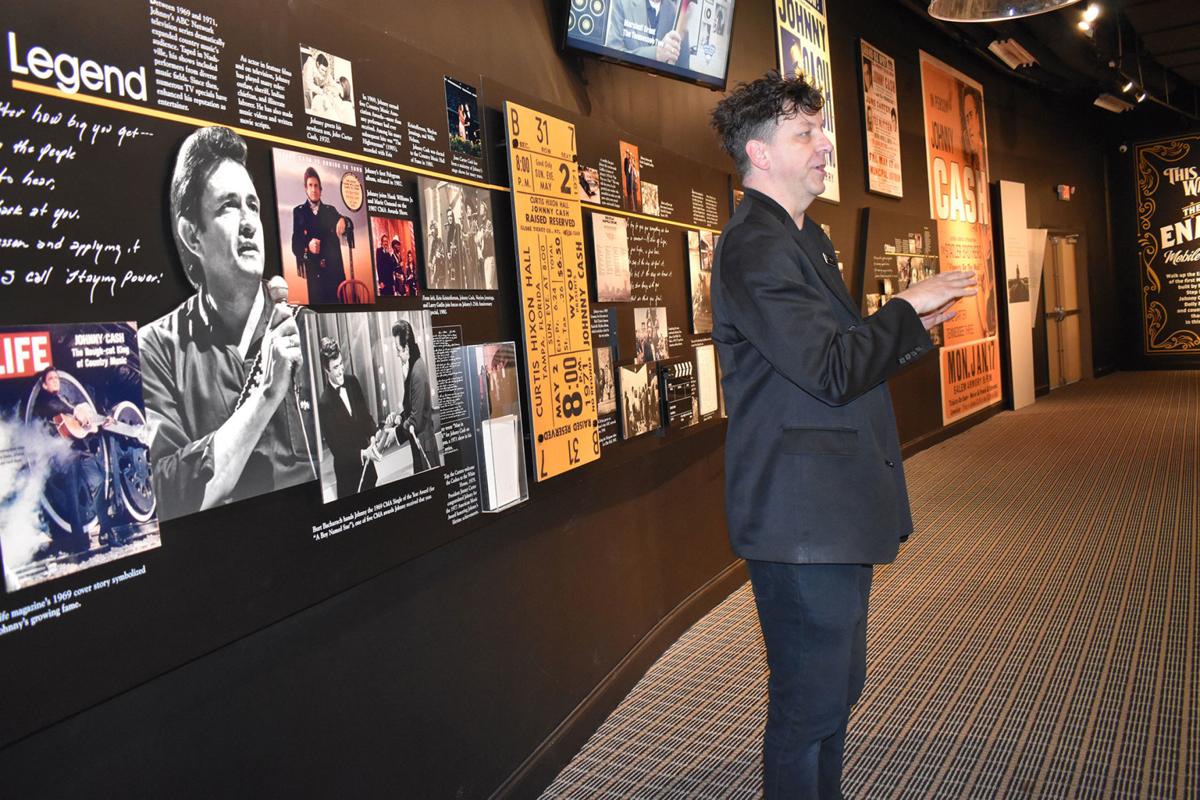 Jay McDowell, multimedia archivist of the Musicians Hall of Fame and Museum in Nashville, leads a group through the exhibits. The museum celebrates songwriters and musicians from all genres of music. 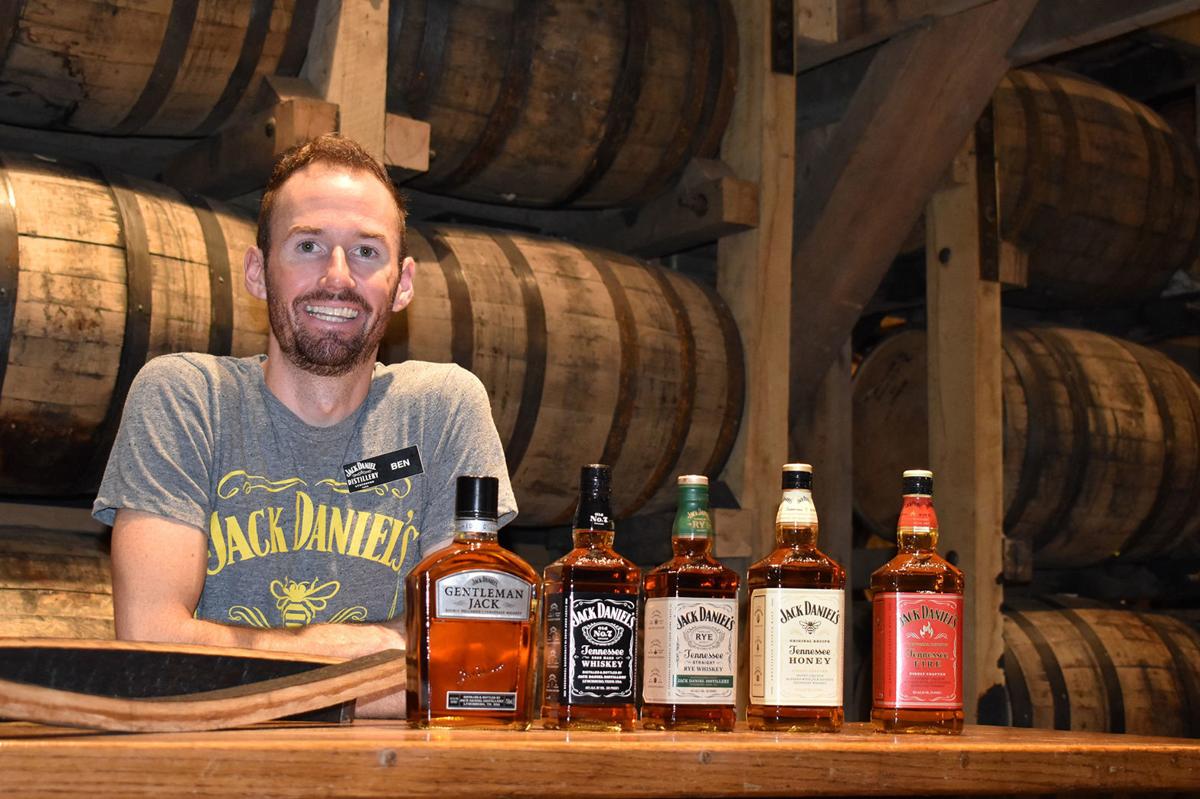 Ben Spears leads a tasting at Jack Daniel’s Distillery in Lynchburg, Tenn., just southeast of Nashville. Visiting the distillery is popular among visitors to Tennessee. 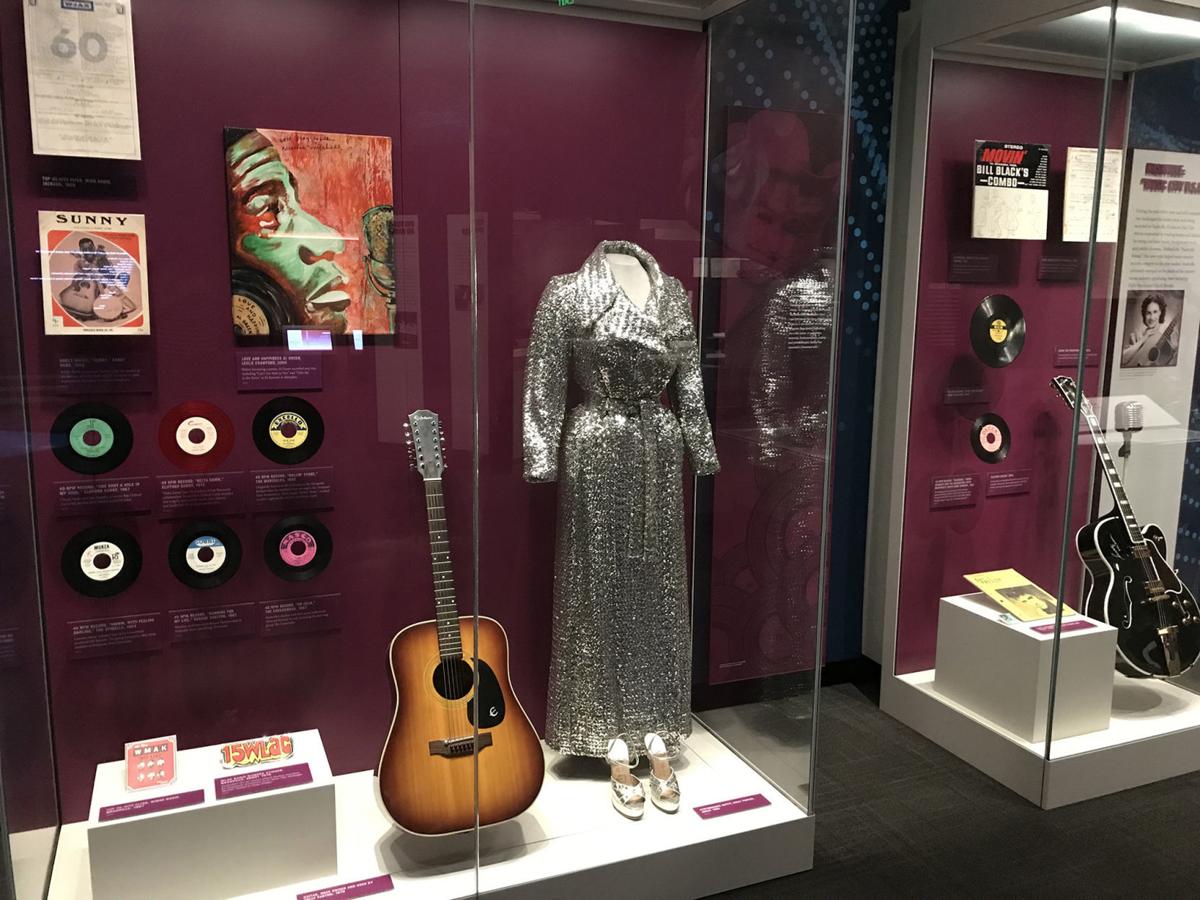 The free Tennessee State Museum provides glimpses into the history of the state, including music and pottery. Shown here is a dress and shoes worn by Dolly Parton at an event in 1980. 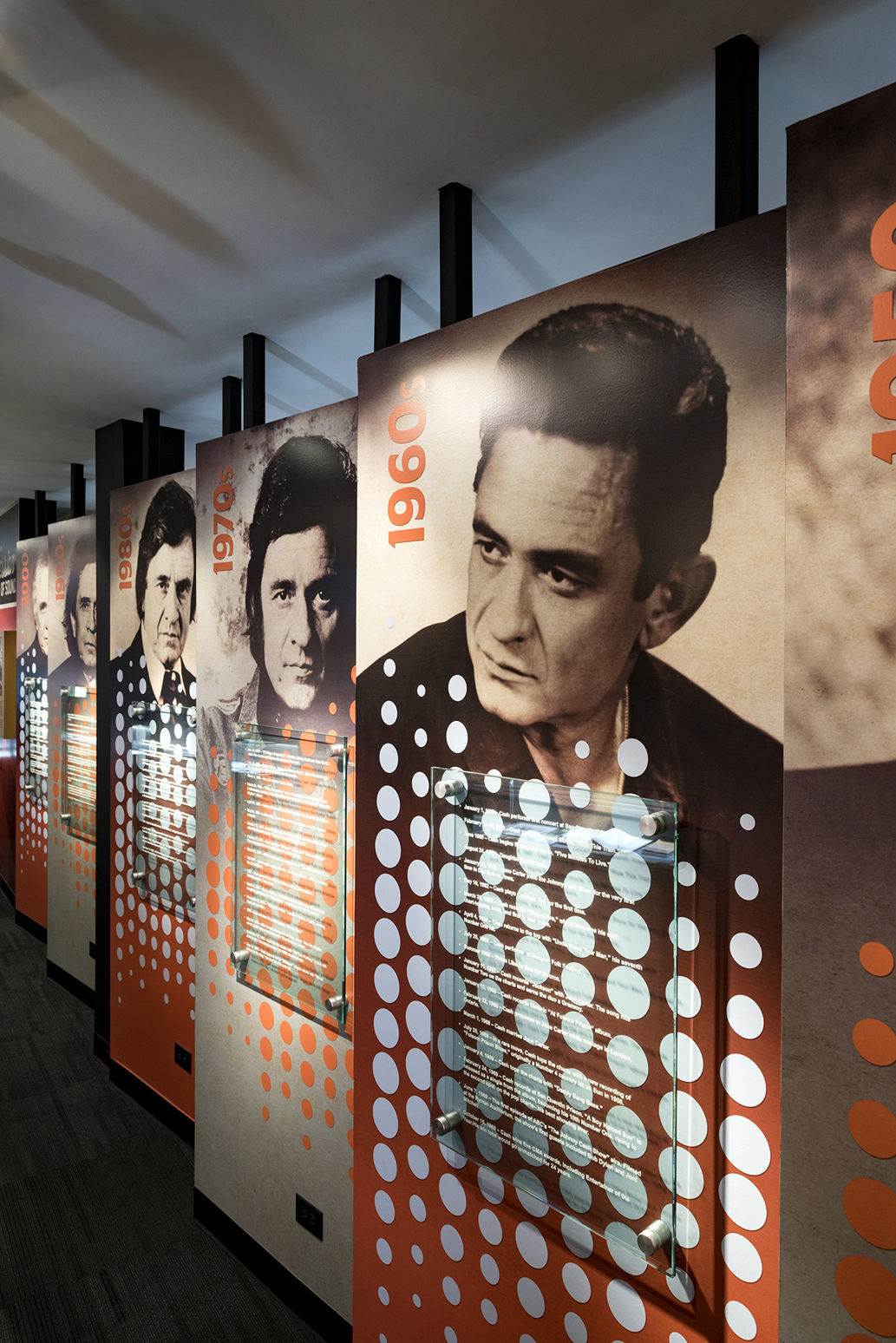 A view of the Johnny Cash Museum in Nashville. 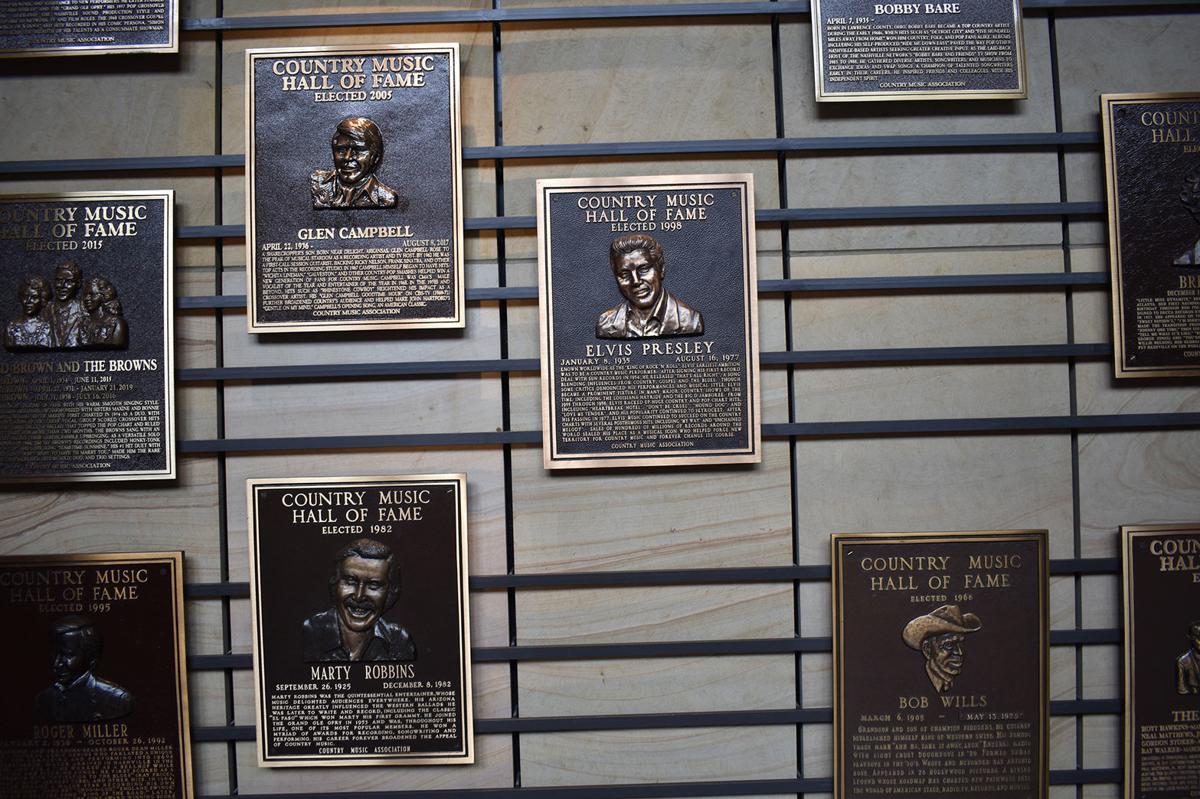 The Country Music Hall of Fame in Nashville pays tribute to country music greats, including Elvis Presley. The first members — Jimmy Rodgers, Fred Rose and Hank Williams — were inducted in 1961.

NASHVILLE, Tenn. — Jay McDowell is a nerd, he’s quick to point out. The head nerd, in fact, of the Musicians Hall of Fame and Museum in Nashville. Or at least that’s what the multimedia archivist, the official title on his snazzy black and gold business card, calls himself as he leads a group of visitors through the fascinating exhibits, stopping occasionally to point out one snippet or another about the musicians and songwriters behind the legends of every genre of music, not just of country.

“Musicians have the ability to turn three minutes in a closed room into a lifetime of memories,” McDowell says as he walks among the ever-growing cache of memorabilia attesting to the musical scribes behind the songs of Johnny Cash and Dolly Parton to Jimi Hendrix to the British invasion of the Beatles and Rolling Stones and all the way to Berry Gordy’s Motown and Hitsville USA.

Nashville, McDowell points out, is a city built on sound, and there’s no shortage of talent here in this place nicknamed Music City, many of whom are paid homage in the museum that’s akin to a giant jukebox.

“Just about everybody plays guitar in Nashville,” McDowell says. “You really have to step up your game.”

The Musicians Hall of Fame and Museum — the Grammy Museum Gallery is also housed at the museum — is but one tiny sliver of Nashville’s heritage that tells the storied history of country music here in this capital of Tennessee. With musical roots running so deep here, it’s easier to think of the city as the capital of country music and not the state capital.

A star in Ken Burns’ series

Just about everywhere we visit, our guides, McDowell included, are excited about “Country Music,” the latest documentary from New Hampshire’s Ken Burns, which premiered last Sunday on PBS. Nashville dominates the eight-part, 16½-hour series that defines country music through its evolution from the first of the 20th century to the last. That is, if country music can at all be defined. According to the late country superstar Waylon Jennings, maybe it can’t.

“Country music isn’t a guitar,” begins his well-known assessment of the genre. “It isn’t a banjo, it isn’t a melody, it isn’t a lyric. It’s a feeling.”

Just a few days ahead of “Country Music,” there I was in Nashville with my husband, Roy, a former country music DJ in our small town in Georgia. The last time he was in Nashville was 1974 for a DJ convention, and he was long overdue for another visit and a walk down memory lane in this place that Webb Pierce, another country music star of yesteryear, once called “the Hillbilly Hollywood.”

That moniker might have been true once in this city with its guitar-shaped swimming pools and mansions built on music, but now it’s anything but hillbilly. Nashville’s roadways are crowded with traffic, its skyline crammed with construction cranes perched atop towering new hotels and office buildings, and its streets swarming with tour buses filled with Americans, Canadians, Australians, New Zealanders, Europeans and Asians, all on a pilgrimage to discover the heart of country music.

But don’t mind the crowds because there’s room for everyone in Nashville, its visitors welcomed with heaping doses of sincere smiles and Southern hospitality. And really, Nashville hasn’t grown so big and impersonal that it lost its small-town feel, despite its metro population of almost 2 million.

While this city rose from the settlement of Fort Nashborough on the banks of the Cumberland River to one that is rife with the medical, publishing and insurance industry, its granddaddy will always be country music.

In one form or another, country music has always been in Nashville, but it didn’t really click until the Grand Ole Opry sprang up. That happened in about 1925 when WSM’s George Hay introduced the WSM Barn Dance with these words, “For the past hour we have been listening to music taken largely from grand opera, but from now on we will present the Grand Ole Opry.”

The name stuck, but good. The Opry grew in popularity as it featured rural performers, the fiddle players and folk and gospel singers, and finally ended up at the Ryman Auditorium in 1941. That was the Opry’s home until 1974 when it moved from downtown to Opryland USA, a behemoth entertainment complex several miles from the Ryman, and taking with it a 6-foot wooden circle sawed from its center stage and then fitted into the new one at Opryland.

The Ryman is still open, and if you’re a country music fan then you owe it to yourself to see this historically rich venue, perhaps the richest in Nashville filled with the ghosts of the early entertainers Roy Acuff, Eddy Arnold, and Minnie Pearl. It’s still open and active with concerts.

Roy and I also visited the Country Music Hall of Fame. At times he was filled with waves of nostalgia as he harkened back to the halcyon days of country music and remembered that he had met many of the greats featured in the museum, among them Dolly Parton, Charley Pride, Tammy Wynette and George Jones.

We also took in a performance at the Grand Ole Opry, even springing for a backstage guided tour so that we could have a chance to stand on stage as the show was in progress. We passed by Ricky Skaggs as we made our way to the stage, where we stood next to Aaron Lewis as he waited his turn to sing. Don’t ask me to explain why, because I just don’t know, but attending the Opry is a very sweet, very familiar experience and you’re somehow mystically connected to its performers as if they’re old homefolks or long-lost cousins.

If you’re planning a sojourn to Nashville and the Opry, factor in time for a tour or visit to other landmarks, including the Historic RCA Studio B where the likes of Willie Nelson and Elvis cut a few hit songs. If you didn’t get enough of Johnny Cash, George Jones or Patsy Cline at the Musicians Hall of Fame or Country Music Hall of Fame, these three country stars are each honored with their own museum. And, if it’s still not enough, until early 2020, you can also see The State of Sound: Tennessee’s Musical Heritage at the Tennessee State Museum.

Live music is everywhere in the city. Just throw a guitar pick and you’ll hit a club, bar or lounge to while away a few hours. Of special note, you may want to check out the iconic Bluebird Cafe or Tootsie’s Orchid Lounge or any number of venues along the Honky Tonk Highway of Lower Broadway. Let your ears be your guide. If it sounds good, then walk on in.

There are other things to do in and around Nashville. When you get thirsty, let your palate be your guide, for within a 90-minute drive of Nashville are a number of wineries, brew houses and distilleries, among them the Jack Daniel’s Distillery in Lynchburg, Arrington Vineyards in Arrington, Lynchburg Winery in Lynchburg, Mayday Brewery and Hop Springs Barrel Brewing in Murfreesboro, and Taps Off Main in Columbia. While you’re in Lynchburg, sample the country vittles (think: fried fish, collards, ribs) at Miss Mary Bobo’s Boarding House.

Nashville also is a hotbed of great restaurants. The Oak Steakhouse restaurant’s prime ribeye is outstanding, and even on a Monday night the place was crowded with locals, always a good sign when it comes to restaurants. For lunch, we liked Acme Feed and Seed overlooking the Cumberland River and where Roy declared his ribs tasty, sweet and tender. The pimento cheese beignets are a must-try at the Farm House, a restaurant known for its seasonal fare. We also enjoyed Josephine on 12th, where I savored the scallops, and on the night of the Opry, we enjoyed an early dinner at Tansuo for traditional Chinese food of General Tso’s chicken.

We also spent one afternoon in nearby Columbia, taking in a cooking class at Columbia’s Culinary Arts Center under Chef Lisa Luchesi, where we learned to turn a simple dish of spaghetti and meatballs into an “ItaliSouth” work of art and met chefs Meredeth Johnston of the Healing Plate, Seth Kaspy, Nathan Anderson and Abe Ruiz of What the Fajita, all of whom teach at the school. Afterward, we had lunch at Vanh Dy’s Asian Restaurant in Columbia for Chinese and Thai as we listened to the soft strains of live piano music.

Tennessee’s musical heritage is like no place else, especially in Nashville. And as much as the city is about country music, it also has the ability to welcome its visitors and make them feel at home.

For more information, visit Tennessee Department of Tourist Development at www.tnvacation.com or Nashville Convention and Visitors Corporation at www.visitmusiccity.com.

For more information, visit Tennessee Department of Tourist Development at www.tnvacation.com or Nashville Convention and Visitors Corporation at www.visitmusiccity.com.

Built in 1910, it’s the only Forbes Five-Star, AAA Five-Diamond hotel in Nashville.

A luxury boutique hotel in the Gulch neighborhood featuring a rooftop lounge with nightly DJ entertainment.

Features from-scratch selections. The bar’s is all-American, with an inventory of wines, spirits and beer that comes only from the United States.