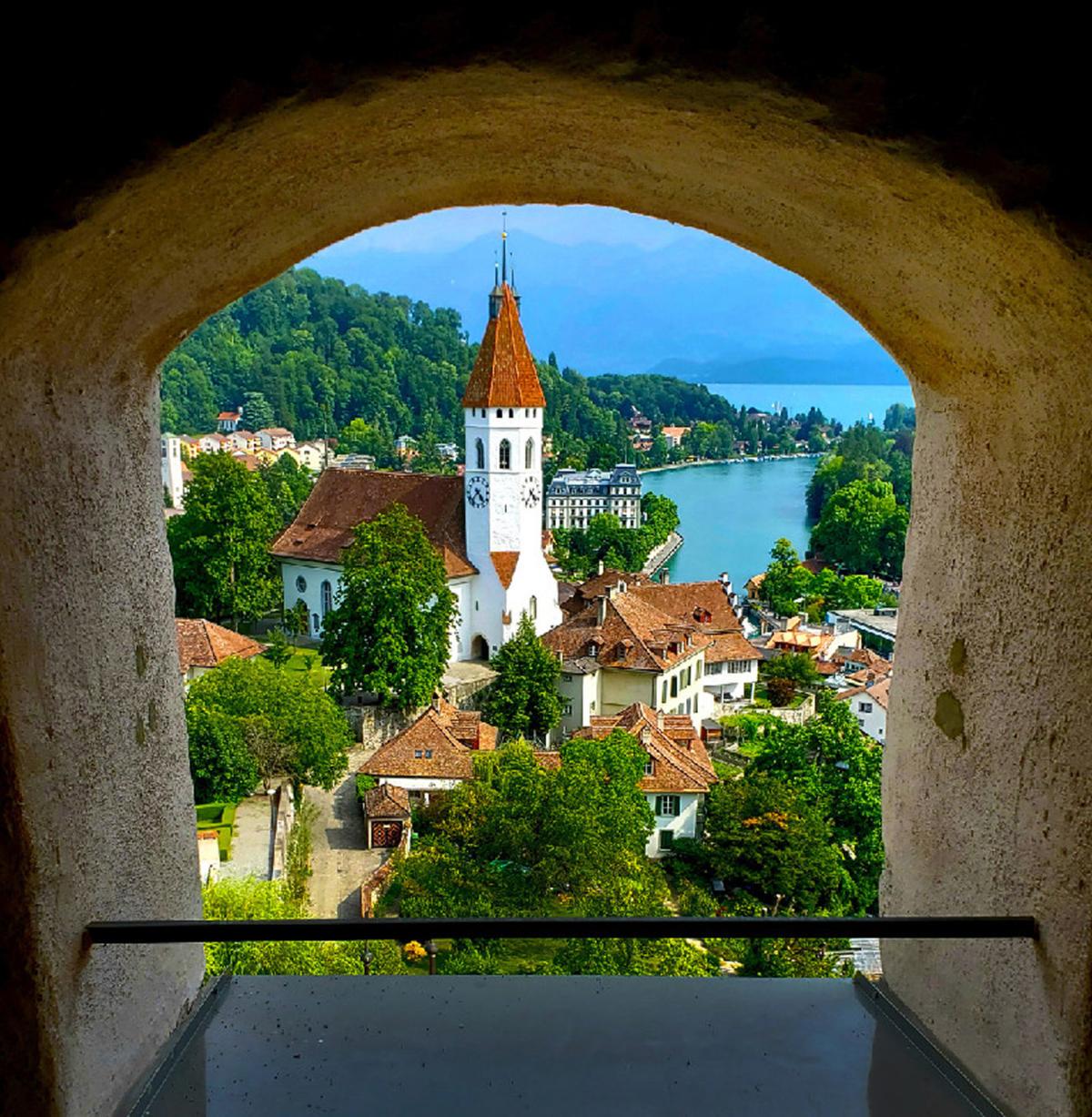 The medieval city of Thun on the shores of Interlaken is best photographed from the portal of the top landing of the 12th century castle that looms over the city. 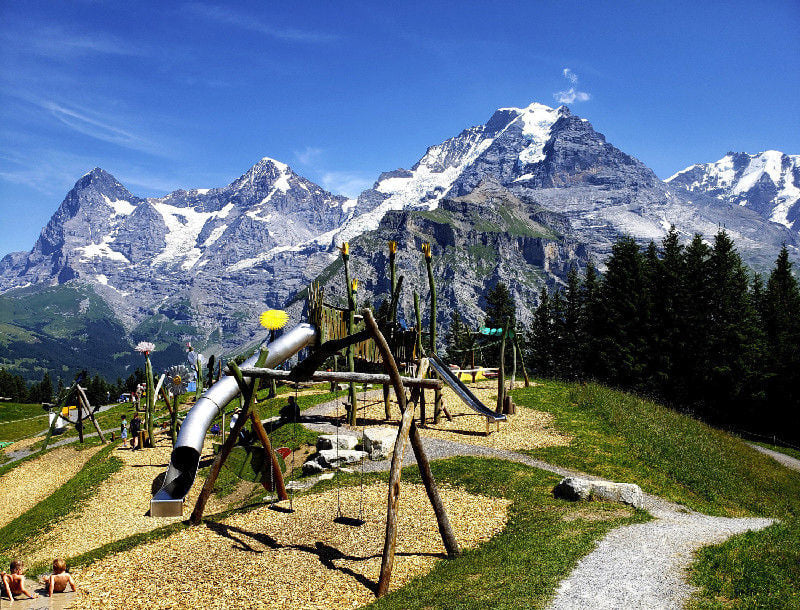 This interactive playground on the Allmendhubel is a favorite for families visiting this region and must rank up there as being one of the world’s most scenic spots for kids to play. 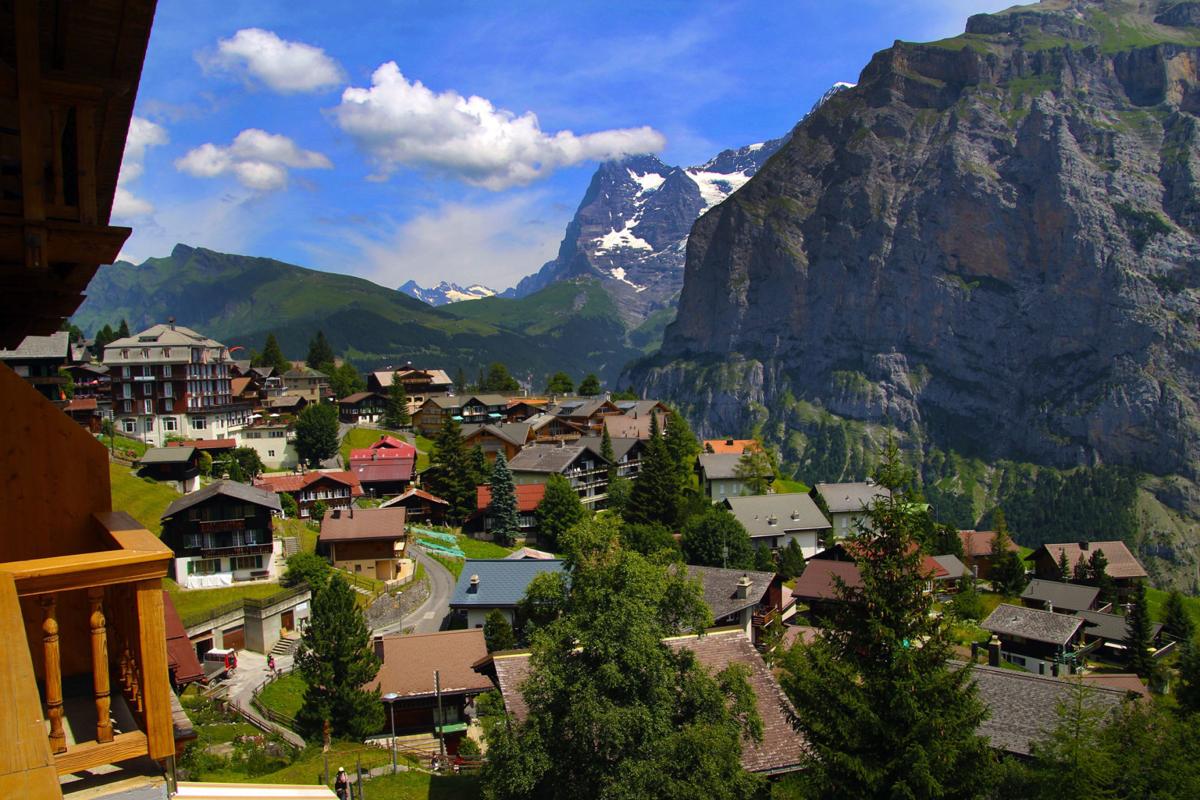 The Alpenruh Hotel in Murren offers terrace rooms with sweeping vistas over the picturesque mountain town and surrounding Alpine peaks.

After visiting the magnificent Lake Geneva area of Switzerland a few years ago, my husband, Tony, and I resolved to return to this beautiful country to continue our voyage of discovery. This time around we opted to visit the Canton of Bern, famous for its jaw-dropping Alpine scenery, and the cosmopolitan and historical city of Basel, situated on the shores of the river Rhine.

Because Zurich Airport has its own railroad terminal, we were on our way in no time after landing. With our Swiss Rail Travel Passes in hand (sure, you could rent a car, but why would you want to?), we settled into our comfortable seats and watched the glorious Swiss scenery roll by. The travel pass gives the bearer unlimited first-class train access in addition to several other benefits and discounts. Most important, it eliminates the stress of navigating through unfamiliar road systems by rental car.

Just getting to our first destination, the enchanting town of Murren — which happens to be built on an Alpine outcropping at 5,500 feet — was definitely a travel adventure in its own right.

It began when we arrived at the Lauterbrunnen train station, where we were in awe as we gazed at the majestic mountain peaks surrounding us. It’s no wonder this spectacular valley is considered one of the world’s most Instagram-worthy places. A short bus ride brought us to the cable car, the only way to reach our mountain retreat as Murren is closed to vehicular traffic. Despite my appreciable jet lag, I delighted in the beauty of the pristine Alpine scenery (peppered with grazing cows, rustic farmhouses and mountain waterfalls) as these pastoral scenes rolled by me some 2,000 feet below.

The cable car came to a halt, and the Hotel Alpenruh, our mountain retreat for the next three days, was just steps away. Our rustic room was pleasant and comfortable, but nothing prepared us for the view that met us when we pulled open the drapes and stepped out on the terrace. A mesmerizing scene of what has to be one of the most spectacular vistas we’ve ever enjoyed from a hotel room met our eyes.

There’s something to be said about a room with a view, especially one this splendid. As we relaxed on our terrace, we followed the graceful path of paragliders as they sailed over the town’s mountains and rooftops, which they do from morning till night. The Lauterbrunnen valley, for obvious reasons, is one of the most popular paragliding regions in the world.

For the next three days, that view seduced us with its sheer magnificence. We woke up at dawn each day to catch the sun rising up over the Alpine peaks, bathing them in a golden morning light. At sunset, we marveled at the deepening pinkish glow the setting sun cast on the mountains, while we enjoyed delicious local wine and cheese on our balcony.

Our first full day, we took a cable car up to Allmendhubel, where kids were playing in what has to be one of the world’s most scenic adventure playgrounds. The area offers a panoramic flower trail with more than 150 species of mountain flowers literally blooming at your feet. When I spotted an elusive edelweiss flower hiding behind a rock on our path, I wanted to burst into the song of the same name, made popular in “The Sound of Music.”

Nothing quite prepared us for our next day’s activity — a 20-minute cable car ride to the spectacular Schilthorn summit, home to 007 Bond World, the original set of the 1969 James Bond movie “On Her Majesty’s Secret Service.” An interactive exhibit takes the visitor behind the scenes of this movie’s production, which featured hair-raising skiing footage on the slopes that was undoubtedly an unprecedented video achievement for its time.

Brunch at the Piz Gloria, the first revolving restaurant in the Alps, was both a gastronomic and sensory experience. We sipped Champagne and dined on an abundant buffet of Swiss specialties, our eyes riveted to the window as the restaurant slowly made its 360-degree rotation past some 200 massive peaks. Add “brunch with a view” to our growing list of visual superlatives experienced on this visit!

We spent hours on the many observation decks available to visitors, gazing at the incomparable vistas on what is known as the “Swiss Skyline,” the spectacular panorama of the towering Eiger, Monch and Jungfrau mountains. Since we were blessed with a cloudless day, we were given the thrill of seeing the tip of Mount Blanc in the distance, the highest mountain in the Alps.

The next day brought us to Interlaken, a region famous for its two connecting lakes surrounded by yet more stunning Alpine peaks. We opted to ride the ferry across the lake to our next destination, the medieval city of Thun, sailing through turquoise blue waters and past medieval castles and charming towns along the way.

A friend alerted us to the relatively little-known St. Beatus Caves on the shores of Lake Thun. This is a ferry stop on the lake, and a series of paths and stairs take you up to the site, a former monastery. The cave tour led us past stalactites and stalagmites, spectacular grottos, subterranean waterfalls and otherworldly scenes that were millions of years in the making. It’s no wonder these caves inspired J.R.R. Tolkien, who visited the area as a youth, to write his vision for the “Lord of the Rings” fantasy world of Rivendell.

Thun is on the pristine river Aare, just a short walk from the ferry stop. We spent a lovely day strolling through the town’s picturesque cobblestone streets and visiting the formidable Thun castle that dates back to the 12th century.

It was time to leave the Canton of Bern and head off to our final destination, the historic and cosmopolitan city of Basel. Upon arrival at Basel’s train station, we again didn’t have to worry about any transportation issues, as our travel pass gave us unlimited access to the efficient trolley and bus system that operates flawlessly throughout the city and its suburbs.

After checking in at our accommodations at the historic and classic Hotel Krafft, we were delighted to see we had yet another room with a view. Our terrace boasted an expansive vista across the Rhine lined with historical buildings and the famous Basel Cathedral, built from the 12th to 15th centuries in Romanesque and Gothic style — one of the city’s many jewels.

We delighted in photographing this splendid panorama at all times of the day and night. During a short-lived thunderstorm one evening, my husband even captured a lightning bolt that lit up the sky right behind the cathedral spires.

Strolling through the medieval streets of Basel quickly became our favorite activity, as each turn on the cobblestone passageways brought us to another historic site and another photo opportunity. The 500-year-old town hall that dominates the city market place is dazzling with its deep red and golden facade. It’s no wonder it is one of Basel’s most visited attractions.

Basel is no doubt a city of the arts and boasts more than 40 museums. We visited the Basel Historic Museum, which leads you back in history from the city’s prehistoric roots to the modern age, featuring fascinating exhibits from every century of the city’s existence. Another highlight was viewing the 20th century collection of classic modernism at the Fondation Beyeler, located a short tram ride from the city. Its exhibitions of renowned artists of the 19th to 21st centuries have brought the museum international recognition and established it as one of Switzerland’s most popular art museums.

From our terrace perch on our final night in Basel, we watched locals swimming in the Rhine. They grabbed inflatable dry bags and glided down the pristine river (the source of which is in the Alps a little more than 100 miles from the city). Others gathered with friends and family for picnics on the shore.

As an added bonus to the evening’s enchantment, we happened to be in town for the IMFLUSS music festival, which lasts three weeks each summer. From a stage in the middle of the Rhine, musicians from around the world perform for free.

There was no more memorable way to say “Auf Wiedersehen” to our unforgettable voyage through Switzerland than by looking down from our terrace and watching people dancing to the music, with Basel’s medieval skyline providing the perfect backdrop to the evening’s magic.

Travel memories just don’t get much better than this.

Swiss Travel Pass: www.swiss-pass.ch; This pass gives you unlimited travel in Switzerland by train, bus, boat, select cable cars and public transport in cities, as well as free entrance to more than 500 museums.