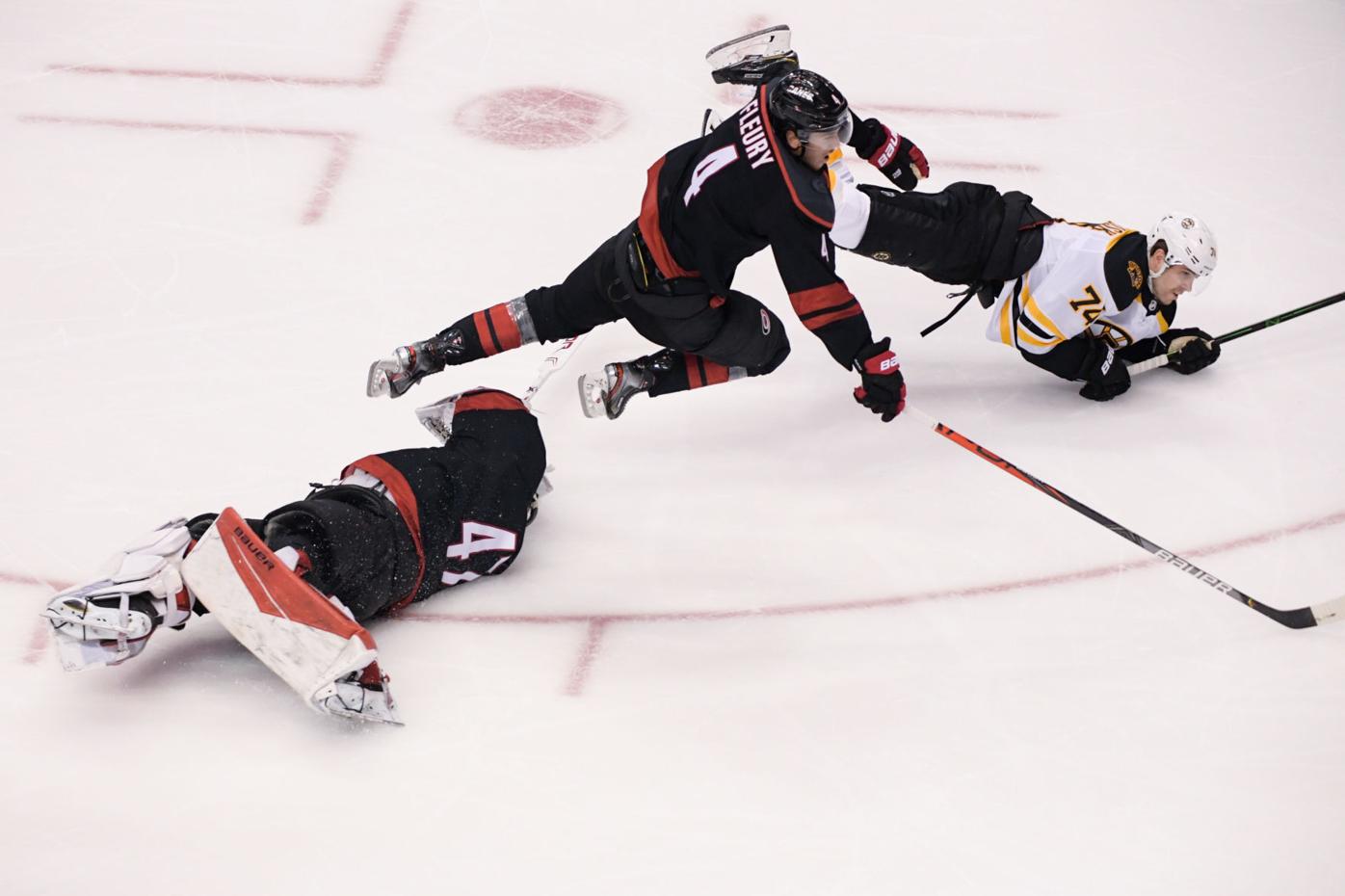 Boston Bruins left wing Jake DeBrusk (74) shoots the puck and scores as goal as he collides with Carolina Hurricanes goaltender James Reimer (47) while defenseman Haydn Fleury (4) gives chase in the third period in game four of the first round of the 2020 Stanley Cup Playoffs at Scotiabank Arena. 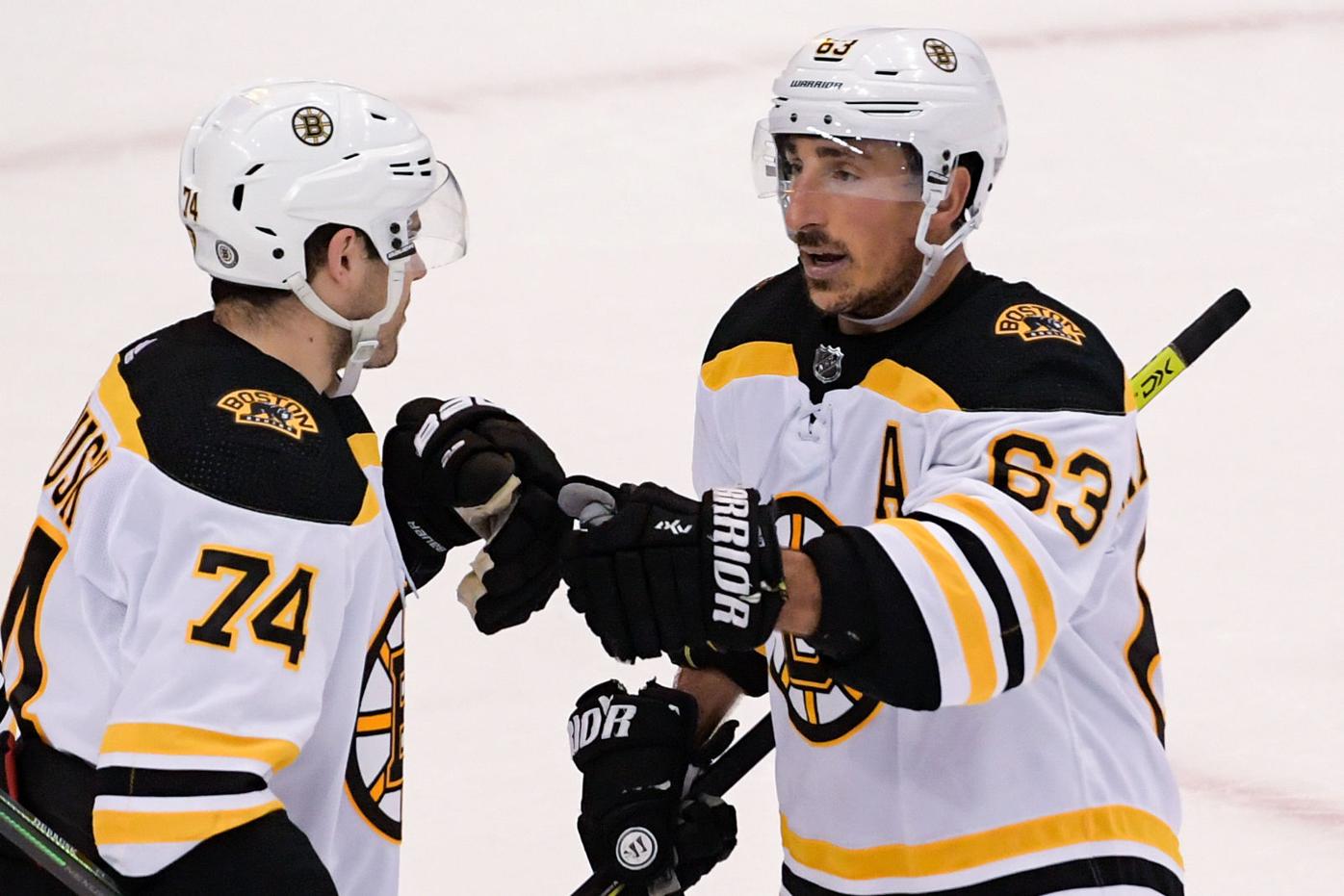 The Bruins Jake DeBrusk, left, celebrates with teammate Brad Marchand after Boston’s 4-3 victory over the Carolina Hurricanes in Game 4 of Eastern Conference quarterfinals on Monday night. The Bruins lead the series three games to one and go for the clincher today at 4 p.m. 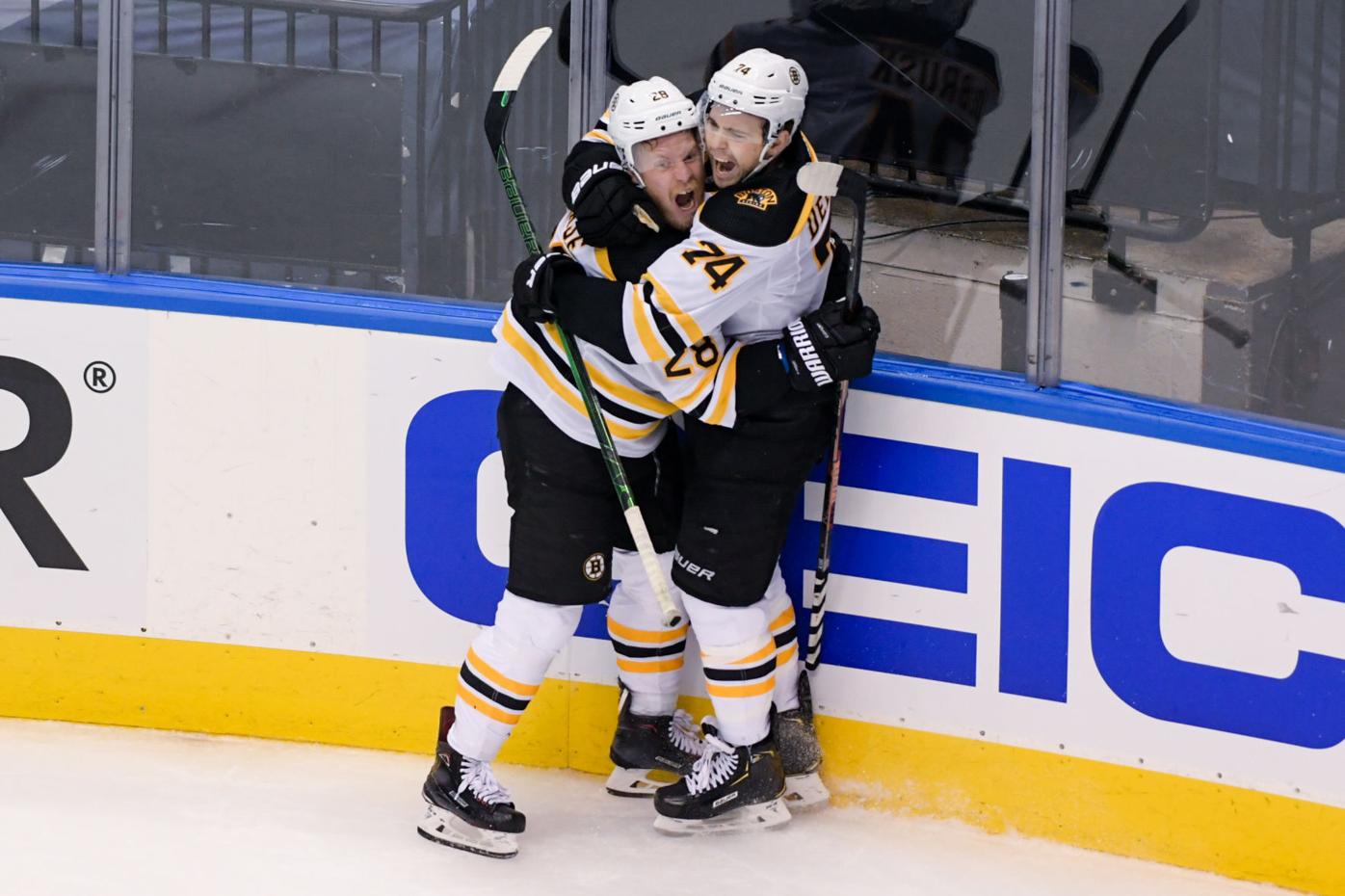 Boston Bruins left wing Jake DeBrusk (74) celebrates his second goal of the period with teammate right wing Ondrej Kase (28) in the third period against the Carolina Hurricanes in game four of the first round of the 2020 Stanley Cup Playoffs at Scotiabank Arena.

Jake DeBrusk scored twice and the Boston Bruins racked up four goals in a span of less than seven minutes in the third period to wipe out a two-goal deficit and defeat the Carolina Hurricanes 4-3 in Game 4 on Monday night at Scotiabank Arena in Toronto.

The Bruins hold a 3-1 series lead going into Game 5 on Wednesday.

Boston goalie Jaroslav Halak, who was in his second game since the weekend announcement that starting goalie Tuukka Rask was opting out of the playoffs because of personal reasons, made 16 saves.

The Bruins finally scored on their 24th shot of the game when DeBrusk converted with 12:34 remaining. The Hurricanes never recovered.

The Hurricanes began the third period by completing a successful penalty kill. That put Boston at 0-for-3 on power plays.

But the Bruins had the first 16 shots in the period, including DeBrusk's second and third goals of the postseason, Clifton's first goal of the month and Marchand's third goal of the playoffs.

Still, Carolina's first shot of the period resulted in Teravainen's goal with 1:27 remaining.

It was just the second time in 10 situations that the Carolina franchise lost a Game 4 when trailing a series by 2-1.

Williams converted on a shot through traffic 9:17 into the game, supplying his first point of the postseason. It was Carolina's first shot on goal after the Hurricanes failed to notch a shot on an earlier power play.

Carolina couldn't overcome the absence of forward Andrei Svechnikov, who was injured late in Game 3.

The Bruins went on a power play less than two minutes into the game. Torey Krug misfired on an open net during that advantage.