UNH’s Sean Sutherlin, shown against Dartmouth last month, was a bright spot for the Wildcats against Albany on Wednesday. 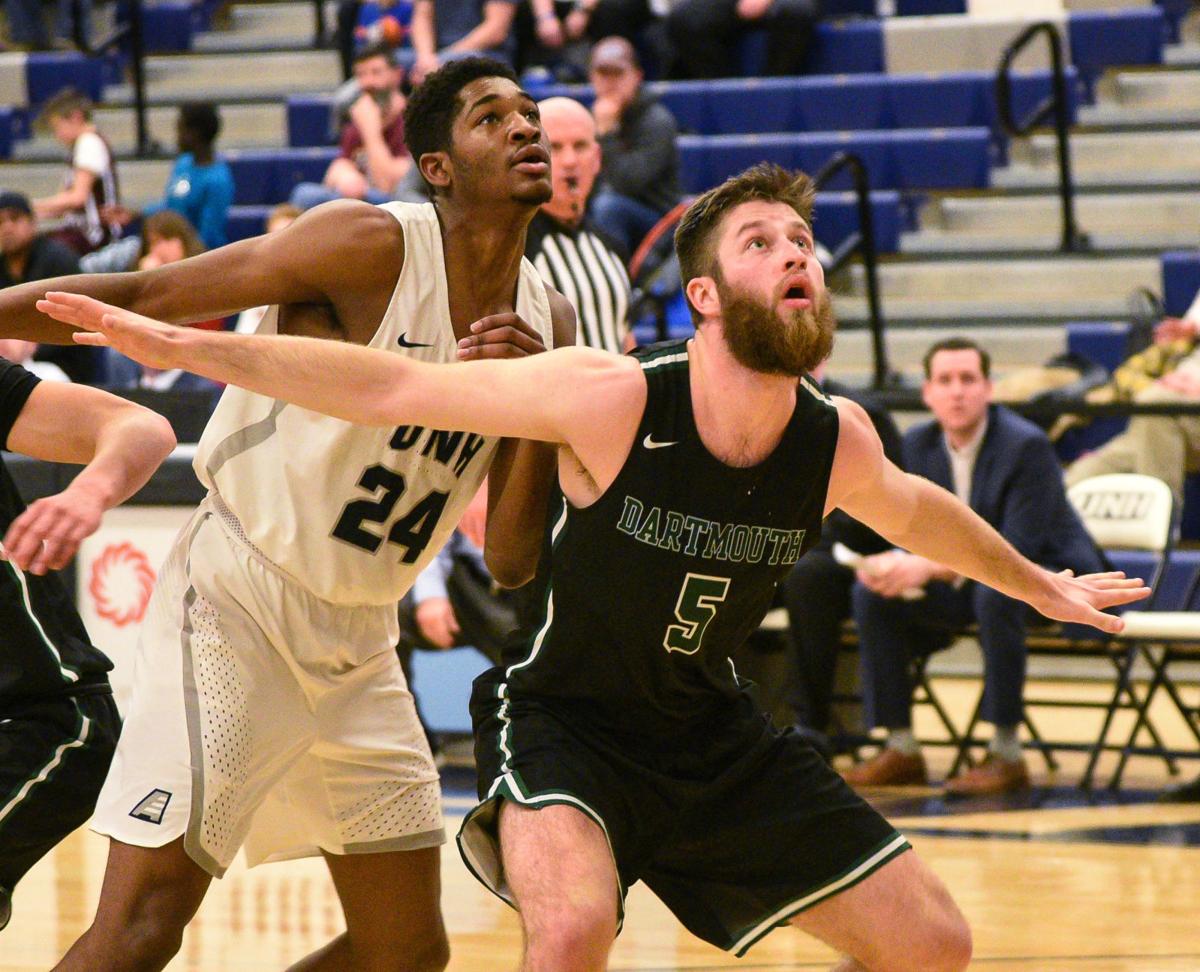 Dartmouth’s Ian Sistare and UNH’s Jayden Martinez wait for a rebound during Monday’s game at UNH.

UNH’s head coach Bill Herrion watches the action against Dartmouth at UNH in Durham on Monday.

UNH’s Sean Sutherlin, shown against Dartmouth last month, was a bright spot for the Wildcats against Albany on Wednesday.

Dartmouth’s Ian Sistare and UNH’s Jayden Martinez wait for a rebound during Monday’s game at UNH.

UNH’s head coach Bill Herrion watches the action against Dartmouth at UNH in Durham on Monday.

DURHAM – Down by four points midway through the second half, the University of New Hampshire men’s basketball team buckled down and finished with style, pulling away from Dartmouth College for a 70-56 at Lundholm Gym.

UNH outscored Dartmouth 40-22 over the final 13 minutes of the game.

“Really good win for us,” UNH coach Bill Herrion said. “When we prepare to play any opponent we’re a very big game prep team. I watch a lot of film on Dartmouth and they’re a really good basketball team. Defensively, we were very good the whole game.”

Despite fighting foul trouble early, junior guard Sean Sutherlin stole the show. In just under 22 minutes of play Sutherlin had a game-high 22 points and also drew six fouls on the defensive end.

“I think my coaches did a great job of keeping me focused when I was on the bench with two fouls so when I go in I can play my game,” Sutherlin said.

Along with Sutherlin, fellow starters Nick Guaarrama and Jayden Martinez fought foul trouble which allowed Marque Maultsby and Mark Carbone to shine off the bench.

Maultsby played 31 minutes and scored 12 points with a game-high four assists while Carbone had eight points in the first half.

“Our bench saved us,” Herrion said. “Mark Carbone was enormous.”

The game was slow moving early as both teams defended well. UNH went into halftime up 24-20. The Green rallied early in the second half to take a 34-30 lead before the Wildcats turned it on late to pick up the win.

The Big Green got 15 points from junior Chris Knight and 11 each from Trevon Ary-Turner and James Foye.

“This is always an intense game,” Dartmouth coach Dave McLaughlin said. “I thought when we took the lead at 34-30 we were expending a lot of energy to have strong offensive possessions. When we started missing some shots I think we lost our energy on the defensive end.”

The Wildcats wrapped up the non-conference portion of their schedule with a 7-6 record. The seven wins has already surpassed last year’s total of five victories. It’s also the first time UNH has finished with a winning record in non-conference play since the 2016-17 season.

“The biggest thing this year is just winning,” Maultsby said. “This year we’re all happy. It’s a great experience for us and the new guys, too.”

The main issue for the Wildcats is depth. UNH has three players (Josh Hopkins, Sutherlin and Guadarrama) averaging 30 or more minutes per game. The upshot is that the Wildcats are far more versatile than in years past and can move players around the floor to mix up lineups.

“I think one positive is we can move guys around,” Herrion said. “Guadarrama can play anywhere on the floor. Sutherlin can play any of the perimeter positions. We got some interchangeable pieces. We’ve got a good seven or eight. We’re an injury away from having trouble. Hopefully we can stay away from that.”

For Dartmouth, the issue is consistency. Scoring has been an issue, and the Big Green need a few weapons to complement Knight in a deep Ivy League field this year.

“I still think we have not played consistently our best basketball,” McLaughlin said. “I think we’re defending well. I think we’re rebounding well. We need to improve at finishing plays on both ends. We need to continue to defend, share the ball like we have been offensively, and see where that takes us.”

Dartmouth (7-7) closes out its non-conference schedule on Thursday night when it it hosts Vermont.