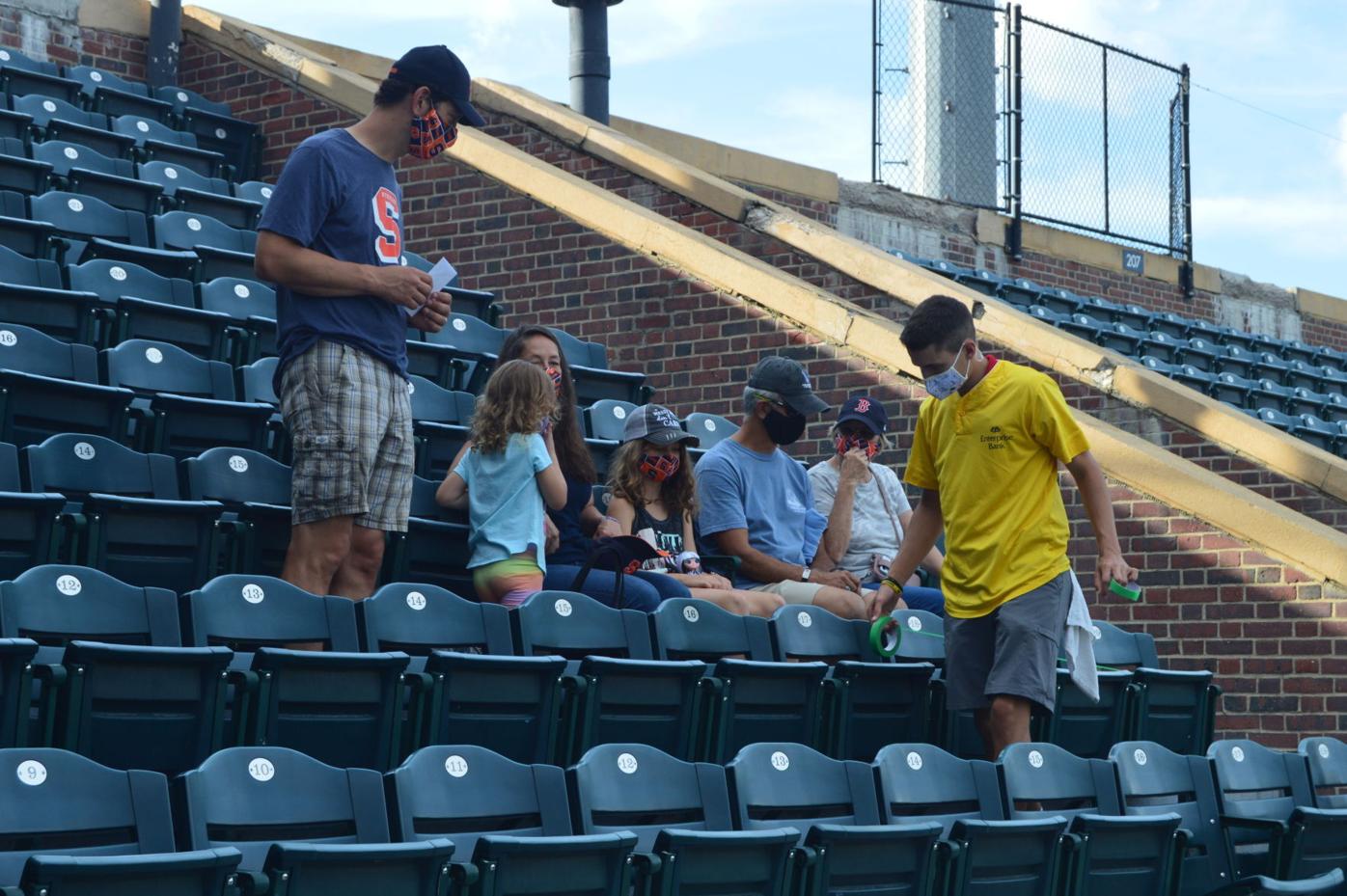 Nashua Silver Knights staff member Drew Neverett tapes off seats in front of, from left, David, Ella, Angela and Mila Metraux and John and JoAnn Owen, of Newton, Mass., during a recent game at Holman Stadium. 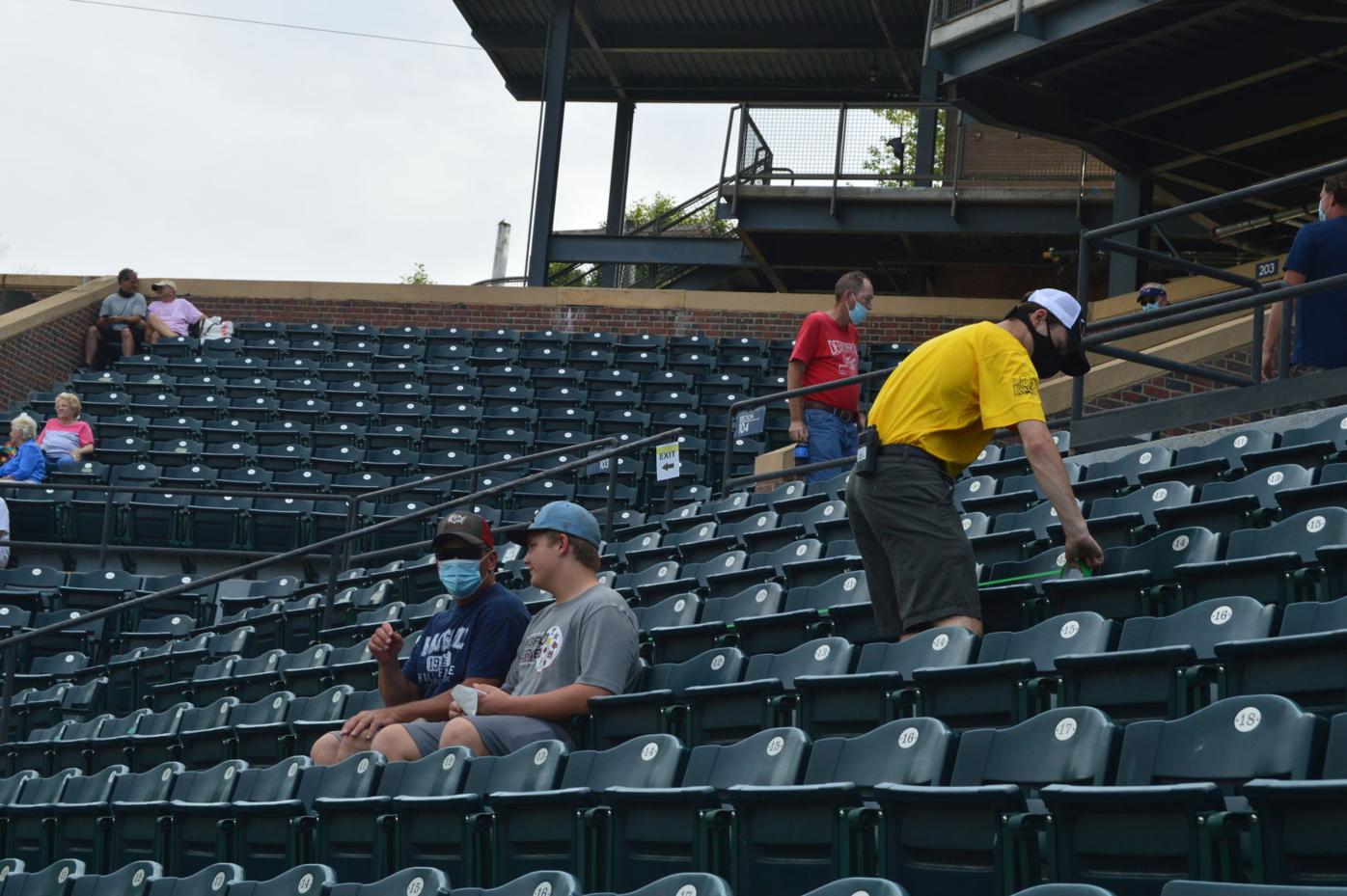 Silver Knights staff member Cam Legvold tapes off seats behind father and son Brian and Adam Day, of Hampstead, who are the father and brother of Silver Knights player and Pinkerton Academy alum Brady Day, to ensure social distancing.

Nashua Silver Knights staff member Drew Neverett tapes off seats in front of, from left, David, Ella, Angela and Mila Metraux and John and JoAnn Owen, of Newton, Mass., during a recent game at Holman Stadium.

Silver Knights staff member Cam Legvold tapes off seats behind father and son Brian and Adam Day, of Hampstead, who are the father and brother of Silver Knights player and Pinkerton Academy alum Brady Day, to ensure social distancing.

And not just the players.

“The first week before the games started happening, we were in here 4-5 days, I think, the week before,” Silver Knights game-day operations staff member Cam Legvold said before Nashua’s 5-4 home victory over the North Shore Navigators on July 24, which was the team’s ninth home game of the season. “We ran through everything so by the time game day came, we were pretty much a well-oiled machine already.”

The FCBL, which consists of teams based in New Hampshire, Massachusetts and Connecticut, is the only summer collegiate baseball league in New England playing this summer. Both the Cape Cod Baseball League and New England Collegiate Baseball League canceled their seasons due to the pandemic.

Legvold and Drew Neverett are both in their first summer working for the Silver Knights and are members of the team’s game-day operations staff. Before home games, Neverett said he and Legvold go around the stadium with a backpack containing a combination of bleach and water that is attached to a spray gun, sanitizing high-traffic areas of the stadium like the bathrooms, stadium seats and suites.

When fans arrive, both help usher and tape off seats in front of, behind and next to their seats to ensure social distancing and will sanitize seats if asked.

The team has a 25% capacity limit on the number of fans it allows into the stadium for home games.

Silver Knights assistant general manager Katie Arend said the team’s staff members have their temperatures taken and answer a symptom questionnaire when they arrive for work each day. On game days, staff members wear masks at all times and remind fans to do the same if they choose to leave their seats.

Neverett, a soon-to-be senior and sports management major at the University of South Carolina, said the added COVID-19 safety responsibilities on top of his normal duties have not been difficult to juggle.

“It was interesting for me at first because I had been around just as a fan but now being part of the operations staff, I’ve been able to see every part of Holman Stadium and just kind of get to learn that so that was fun and interesting to do the first few days,” Neverett said. “... It’s been good to just kind of see people in their groups that they hang out and stuff. They buy tickets together, they’re all fine to sit together. That’s been good but us going around and taping off the distancing seats, it’s worked out pretty well, honestly.

“Most people are smart enough. They know by now to just keep their mask on when they should and sit apart from everyone.”

The concessions staff has also made changes to help prevent the spread of COVID-19, including switching to condiment packets from communal pump machines and individually wrapping each food item instead of serving them in an open fashion. Silver Knights owner John Creedon, Jr., who bought the team in April of 2019 and lives in Shrewsbury, Mass., said the concession changes were easier to implement because his family owns a catering company, Creedon and Co.

“The staff has adapted very, very well and none of this would be possible without their buy-in to how we have to operate these days,” Creedon said.

Arend, who is from Newfields and is in her second summer working for the team, said drafting and finalizing the plan “was a long, long process.”

Arend, 24, said she and Cook consulted with the Goldklang Group, which owns the FCBL’s Pittsfield Suns, who are not playing this season, two minor league teams and one independent league team. They also had guidance from some of the FCBL’s contacts at Massachusetts General Hospital and Bobbie Bagley, who is the director of the City of Nashua Division of Public Health and Community Services.

“Everyone thought it (the pandemic) wasn’t going to be as long as what it has been so we were looking at it four weeks, then five weeks, then we hit like the 10-week point,” Arend said. “At that point, there were other leagues that canceled and there wasn’t a lot of hope for a lot of people and we kept telling our players, ‘Hey, our goal as a league is to make sure you guys get exposure to scouts,’ and we stuck pretty true to that to make sure that, hey, even if we’re not making as much money as we’d like to this year, even if we don’t have as many fans, our goal is to have baseball on the field. So having them play has definitely been the highlight of everything.”

Legvold, a soon-to-be junior at Nichols College and Tewskbury, Mass., resident, said both Cook and Arend kept the rest of the staff in the loop leading up to the season through efforts like holding Zoom meetings.

“A lot changed and they wanted to make sure that our focus was on the fact that we would be able to keep baseball here,” Legvold said. “By doing that, we have to be a little harsher with people that aren’t wearing masks and spending a little extra time cleaning the seating bowl every night and stuff like that.

“The overall message was like, ‘Don’t screw this up so we can have baseball for the rest of the year.’”

Sean Cullinane, a Derry resident, and his son, Aaron, attended their first Silver Knights game this summer on July 24. Aaron participated in the team’s first kids camp earlier in the month, during which he received free vouchers for tickets that he and Sean used for the July 24 game.

“They (the game-day staff) assigned us our ticket when we came in,” Sean Cullinane said. “Shortly after, just before the first pitch, they came and taped off where people hadn’t bought tickets and made sure that we were assured the room. It’s been great.”

Sean Cullinane said he and his son usually go to one or two Silver Knights games each summer and plan to attend more games this season as well.

Patience is a virtue

Creedon said fans have been patient with the staff throughout the season.

“The fans have been tremendously understanding and I think folks in the community need this,” Creedon said. “People understand how important it is but at the same time how delicate it is and that we’ve got to all be responsible and conscious in what we’re doing and how we’re doing it in order to see it through to the end of the season here.”

Legvold, Neverett and Arend each said they are not worried about contracting COVID-19 while working.

“I think, as a team, our protocols are all pretty good across the board,” Neverett said. “I’ve been here almost a month now and we’ve all been kind of working the same, working together every day. I’m comfortable with the people that I work with too, which is big. As long as we’re following all the stuff we need to do with masks and cleaning and all that, I’m pretty comfortable with it.”

Arend said the team loves being able to have fans at games in a safe way and giving people in the community an activity option.

“It’s summer, the weather is nice out,” Arend said. “Having people kind of get that experience back out and kind of delve into some normalcy again, I think, is all we can ask for at this point.”