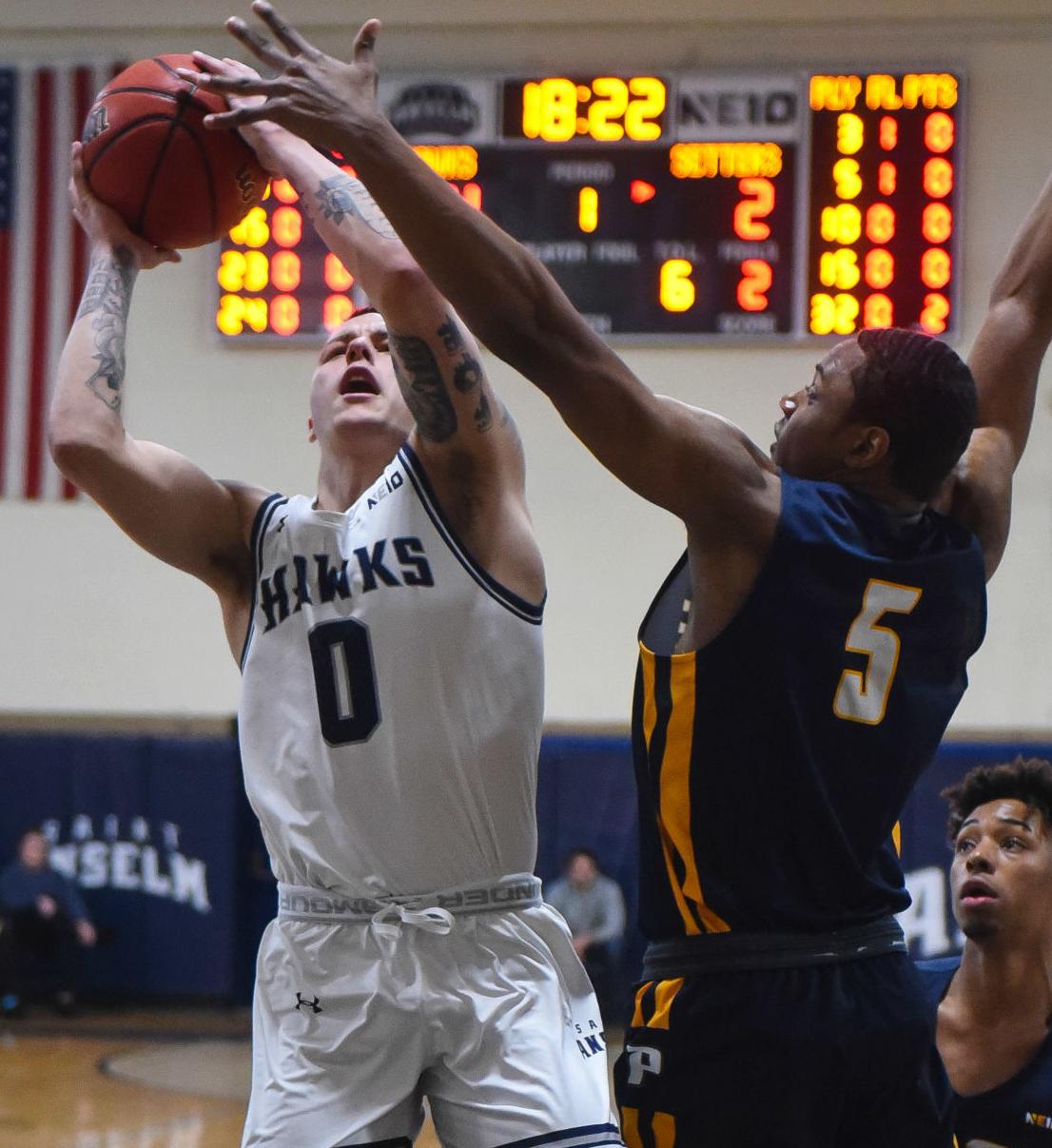 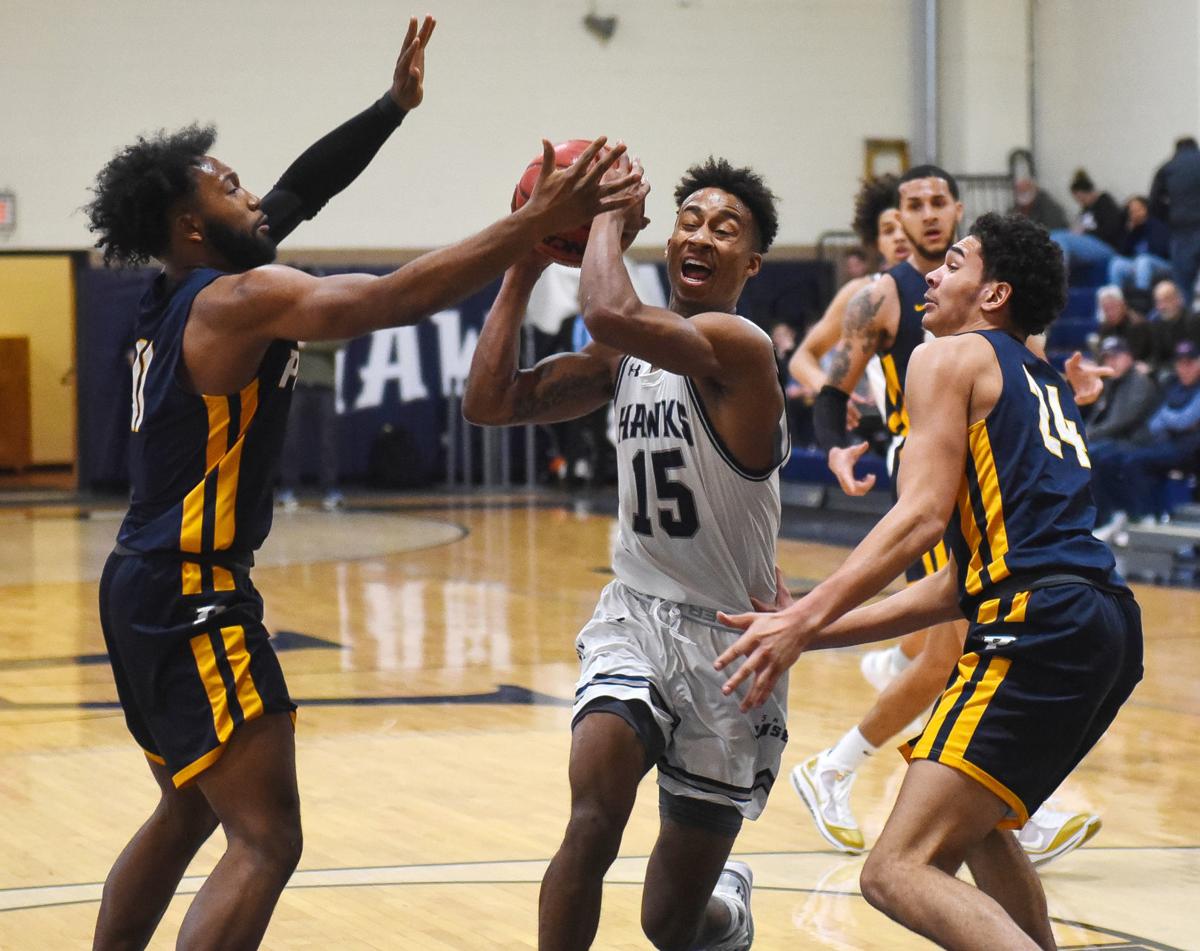 Saint Anselm’s Chris Paul charges in to the hoop against Pace’s Ray Montilus, left, and Bryan Powell at Saint Anselm College in Goffstown on Sunday. 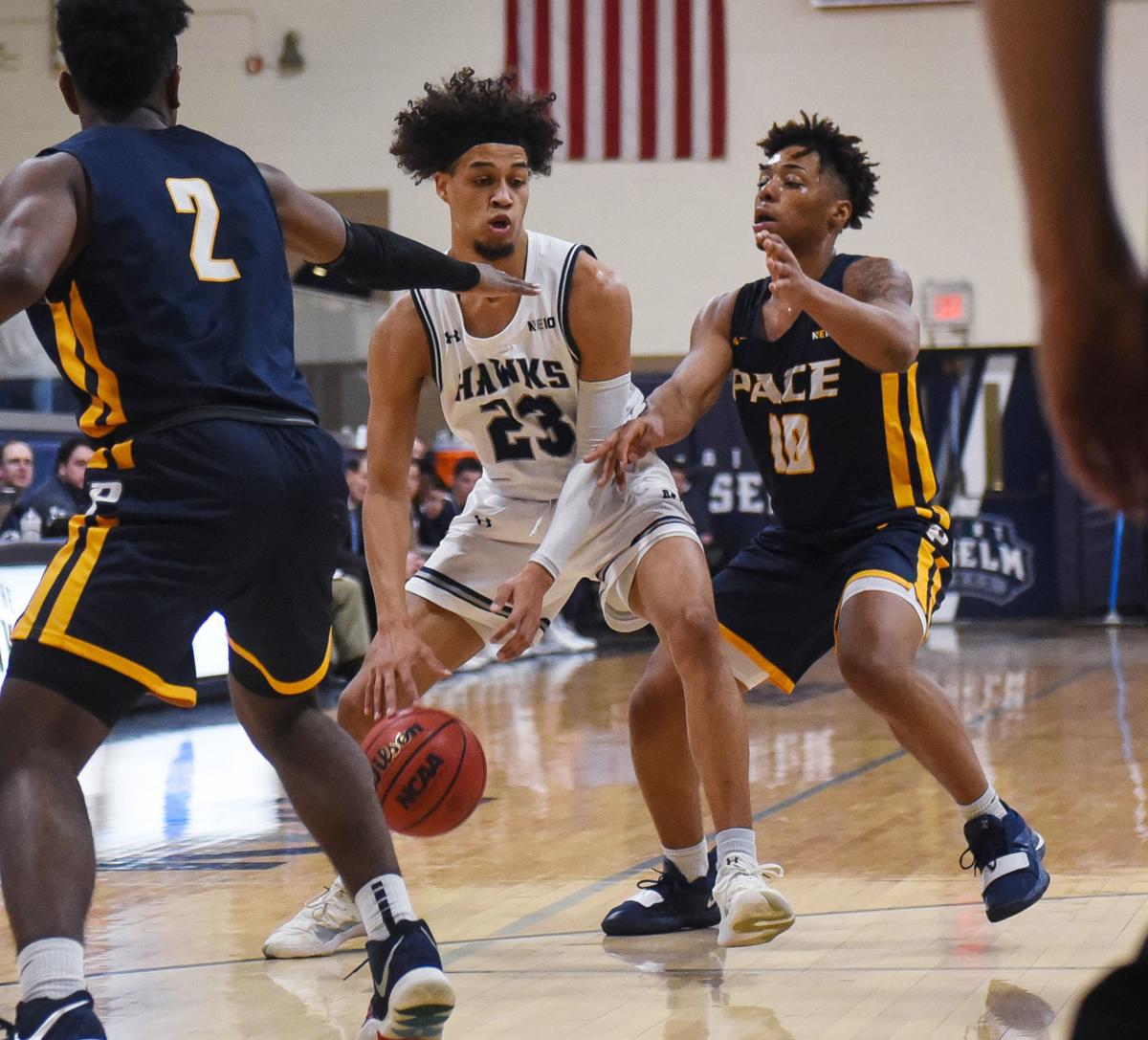 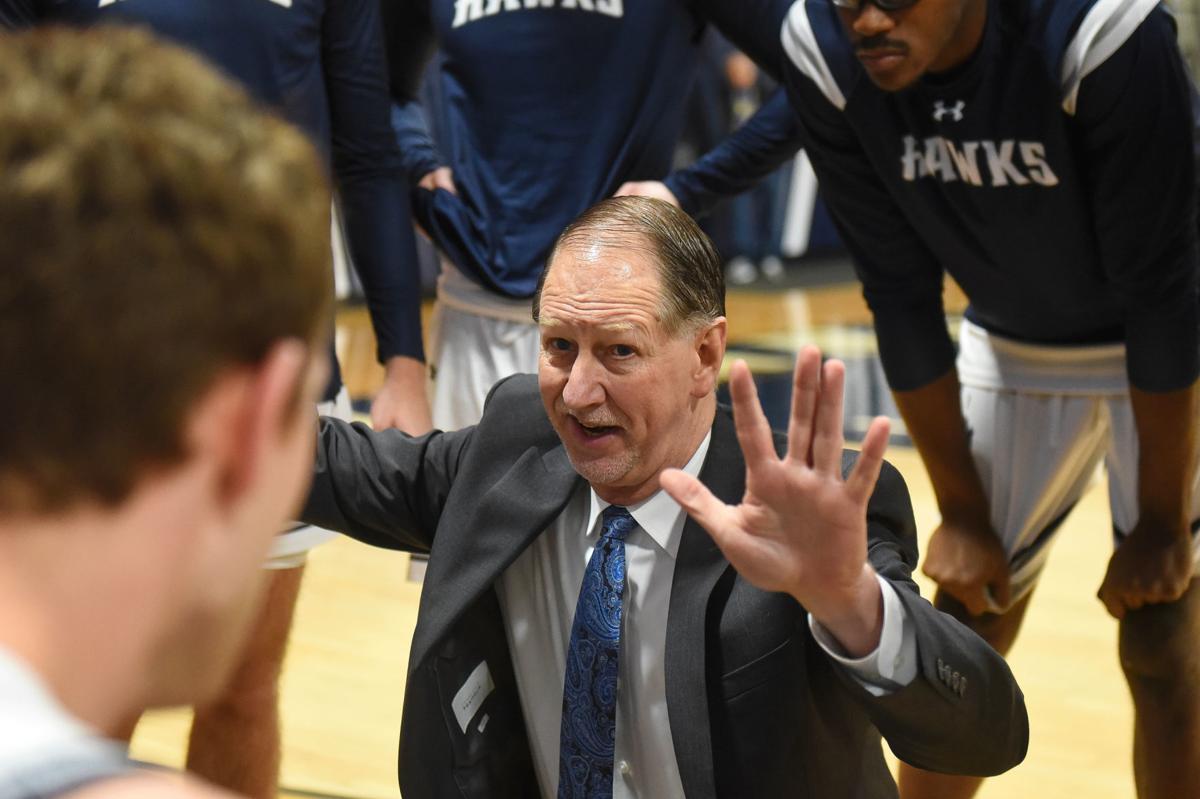 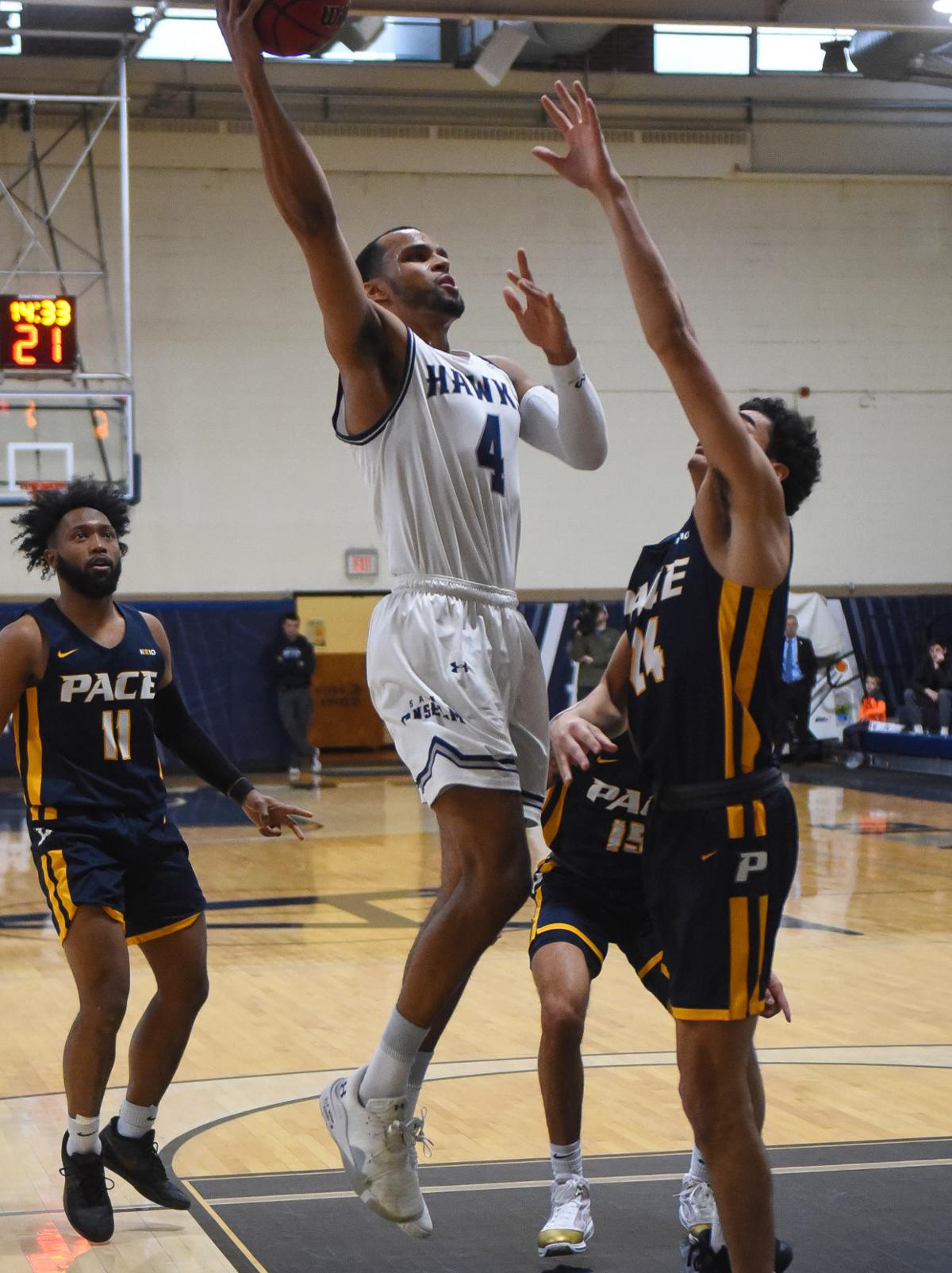 Saint Anselm’s Chris Paul charges in to the hoop against Pace’s Ray Montilus, left, and Bryan Powell at Saint Anselm College in Goffstown on Sunday.

GOFFSTOWN — There was never a worry in the minds of the players of the Saint Anselm College men’s basketball team, even though the Hawks entered halftime of Sunday’s Northeast-10 quarterfinal game against Pace trailing by eight points.

Pace didn’t let go of its lead easily, but the Hawks finally cracked through at the end to survive.

St. Anselm used a 9-0 run on its way to an 82-77 victory at Stoutenburgh Gymnasium. Miles Tention drained six 3-pointers and finished with 20 points to lead a brigade of five double-digit scorers for the Hawks.

“We’re at that time of year where we’re just trying to win and move on,” Saint Anselm coach Keith Dickson said. “Playoff games take on a life of their own. They don’t have anything to do with the regular season. It’s just a single entity that’s out there and you’ve got to win it.”

“That was a very difficult game for us,” Dickson added. “I thought Pace played great in the first half. We weathered the storm and played nip-and-tuck down the stretch. I personally thought the defense won the game for us.”

A year after reaching the Division II Final Four, Saint Anselm (19-8 overall) will carry its nine-game winning streak to Wednesday when it hosts Granite State rival Franklin Pierce in a league semifinal. FPU (16-11) advanced with a 76-74 win over Adelphi.

“This a testament to the growth that we’ve had all year,” Saint Anselm guard Tyler Arbuckle said. “Coach said to us in the locker room that six weeks ago we wouldn’t have won this game. That’s just us maturing as a group, keeping our chemistry and working hard at practice.”

“Wejnert is the leading scorer in the (23.5 ppg) and everybody has had problems with him, and then they made more jump shots than they normally make,” said Dickson. “Our defense has consistently gotten better and I can’t remember the last time we gave up 47 points in a half. It was going to be too much to win the game. We tightened up a bit on defense in the second half and took care of business.”

After closing out the first half with a big shot, Tention opened up the second half with three of them. He hit back-to-back treys to give Saint Anselm back the lead and followed a Gustav Suhr-Jessen hoop with a 3-pointer to extend the cushion to 59-53 with 14:35 left in the second half.

“They came out in a zone, we moved the ball around and I got a shot in the corner. That felt really good and that kind of got me hot,” Tention said. “Then I hit from the wing and another one in transition. That really got us going on offense.”

“I thought that first shot Miles hit in the second half from the corner was a really big shot because it got us back into the game,” Dickson said. “They could’ve extended that at the beginning of the half, but they didn’t. I thought Miles played great.”

Pace battled back to take a 71-68 lead. But a pair of Arbuckle free throws gave the Hawks back the lead, and Suhr-Jessen followed with a 3-pointer.

With Saint Anselm clinging to a 77-75 lead, Arbuckle sealed the victory with a layup in transition on a long pass from Danny Evans with 31 seconds remaining.

“That was just a great pass from Danny, I happened to come up with it and I got a lucky roll. I’m just happy to come out with the W,” Arbuckle said. “Nobody was really worried (at halftime). We knew we had to come out strong in the second half, buckle down on defense and eventually the shots would start falling.”

Franklin Pierce 76, Adelphi 74: The visiting Ravens built a 76-69 lead with three minutes to play then held off Adelphi, which missed a pair of shots in the final seconds. Isaiah Moore poured in 29 points and Doyin Fadojutimi added 22 for FPU. Nashua’s Ronnie Silva netted 21 for Adelphi.

GOFFSTOWN — After controlling the first half, the Saint Anselm College women’s basketball team got a bit of a wakeup call from New Haven in th…