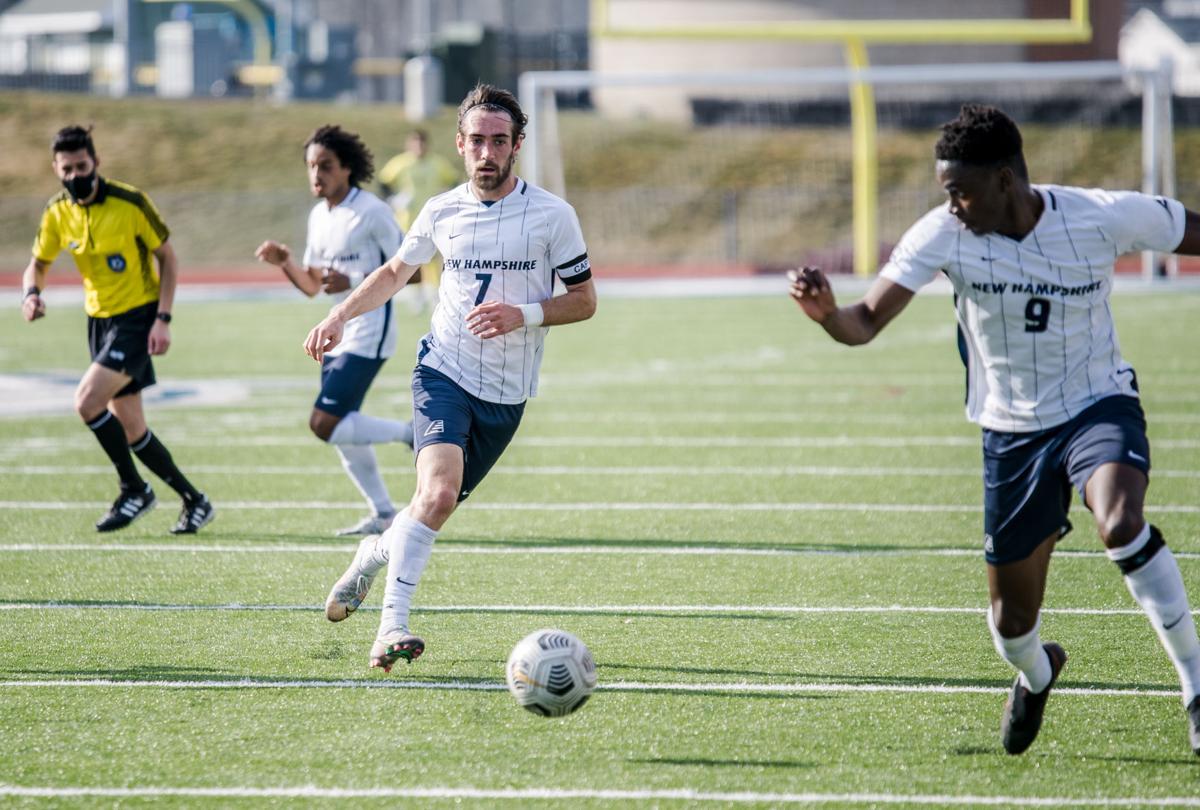 UNH's Jacob Gould controls the ball during the Wildcats' March 26 victory over Hartford. 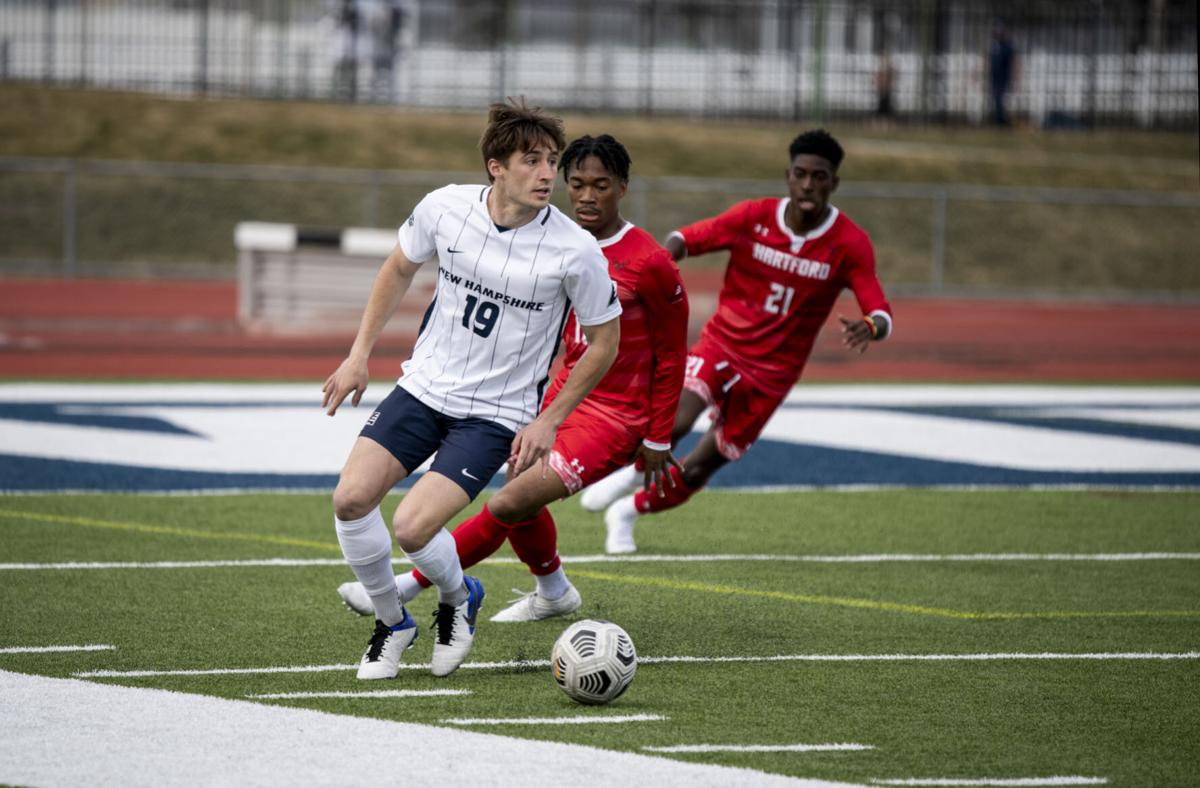 UNH’s Chris Pinkham of Concord looks for a teammate during the Wildcats’ victory over Hartford last Friday.

UNH's Jacob Gould controls the ball during the Wildcats' March 26 victory over Hartford.

UNH’s Chris Pinkham of Concord looks for a teammate during the Wildcats’ victory over Hartford last Friday.

BESIDES classes and practicing and playing with his teammates on the University of New Hampshire men’s soccer team, Jacob Gould admits his schedule is a bit boring.

For the Wildcats, this spring season during the COVID-19 pandemic is about making individual sacrifices so the team can stay on the pitch, the senior captain from Exeter said.

“We’re all trying to come together, put our heads together for a common goal of making it however far this season,” said Gould, a forward/midfielder. “The way I look at it, when we’re home with our families during COVID, you live under the roof of your parents, you listen to their rules about COVID. ... Now that we’re here and we’re a family, we abide by the same rules and principles in terms of what we’re doing on the weekend, who we’re seeing.”

Like UNH’s other fall sports programs, the men’s soccer team had its season postponed to the spring. The team practiced five times a week but did not play or scrimmage against other programs during the fall. Gould said those practices helped the team build chemistry with some of its new players and get accustomed to the COVID protocols that have carried over to the spring.

UNH coach Marc Hubbard said there are staggered times assigned for locker room usage, masks are worn throughout each training session and players cannot shower at the fieldhouse. The team has early-morning COVID-19 testing twice a week and there is a cap on how many players can travel to away games, Hubbard said. Players do not have to wear masks while playing in a game but coaches and players wear them on the sideline, he said.

“You have to be pretty malleable, willing to roll with it,” Hubbard said of this season. “Our team has done a really good job sacrificing for each other and that’s an incredibly hard task to do as a college student. They’ve done a great job taking care of each other, making good choices, putting themselves in position to be on the field on game day.”

The America East Conference divided its nine member teams into three pods for the shortened regular season, with each team scheduled to play its fellow pod members twice each alongside two additional games. Each pod champion and one wild card team will qualify for the AE tournament.

The two-time defending AE champion Wildcats (4-0-1, 3-0-1 AE) opened their season with a 2-1 overtime triumph at UMass Lowell on Feb. 26, marking their first game since falling at No. 23 Virginia Tech in the second round of the 2019 NCAA Division I tournament.

“Just stepping on the field for the first time in such a long time was such a big euphoria,” said UNH junior midfielder/forward and Concord resident Chris Pinkham, who missed all but two games last season with a quad injury. “I’d say for me, personally, it just kind of was a weight lifted off the chest a little bit to be able to be free and kind of forget the situation that was going on in the world and as a group I’m sure we felt the same way.”

Pinkham and Gould credited UNH’s unbeaten mark to the strong connection between teammates and its depth.

“I think our team has a unique bond that many teams don’t really have,” said Pinkham, whose grandfather, George, is the Bow High School boys soccer coach and great uncle, Dave, coaches the Gilford High School boys soccer team. “I think everyone sees each other as a brother, as a family member. Everyone keeps each other accountable, whether it’s a harsh truth or somebody looking to improve and asking for criticism. ... That’s something that’s extremely overlooked in a lot of teams — the ability to keep everyone accountable.”

Six players have scored and 12 have logged at least one point for the Wildcats, who lead the conference with 12 goals.

“From the beginning, it’s been a next-man-up mentality — be ready for your chance because it’s going to come, whether there’s an injury or a COVID test that puts someone out,” said Gould, who played striker, attacking midfielder and holding midfielder in the Wildcats’ 4-0 win over Hartford last Friday.

Hubbard said UNH did not have its full complement of players available for any of its first five games and he expects that will continue to be the case going forward.

Before it can focus on both defending its conference crown and the NCAA tournament, UNH will conclude its regular-season slate with a home rematch against UMass Lowell (0-5-0, 0-3-0) today at 2 p.m. and a road bout at Vermont (3-0-1) next Friday. UNH and the Catamounts played to a scoreless tie in Durham on March 12.

Pinkham said he and his teammates’ individual sacrifices have helped put the Wildcats where they want to be at this point in the season.

“It definitely hurts but where we are is all worth it right now,” Pinkham said. “We’re in a good position to go into the America East tournament, do well there and hopefully make a huge push in the NCAA tournament as well.”