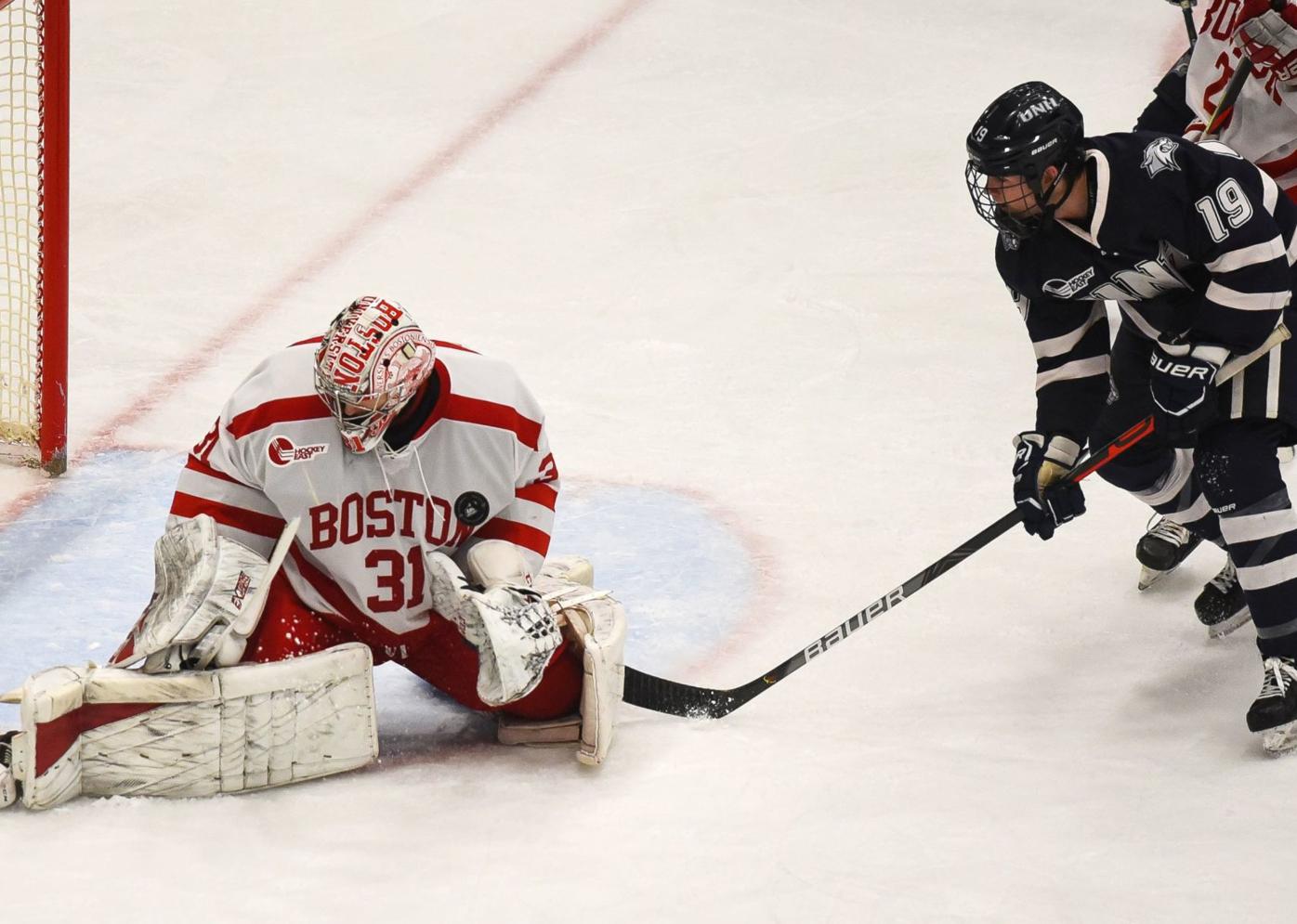 UNH’s Eric MacAdams bears down on Boston University goalie Sam Tucker at the Whittemore Center at UNH in Durham on Friday. Tucker made 26 saves in the visiting Terriers’ 4-1 win. 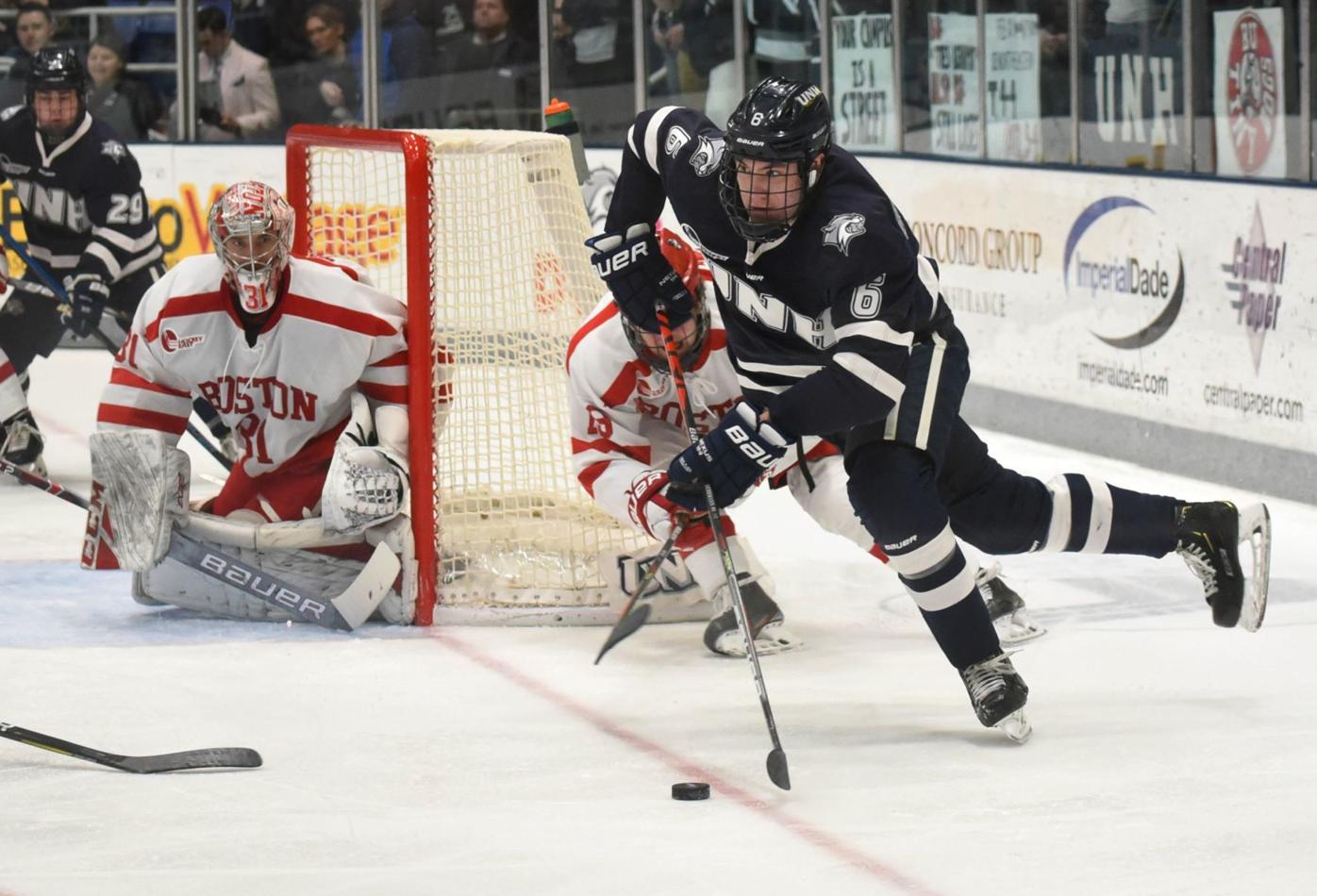 UNH’s Eric MacAdams bears down on Boston University goalie Sam Tucker at the Whittemore Center at UNH in Durham on Friday. Tucker made 26 saves in the visiting Terriers’ 4-1 win.

DURHAM — Discipline was the difference in the Boston University men’s hockey team’s 4-1 Hockey East victory over the University of New Hampshire Friday night in front of 4,969 fans at the Whittemore Center.

The result dropped UNH into a tie with Northeastern and Providence for seventh place and moved BU into fourth place in the 11-team Hockey East standings. The top eight teams at the end of the regular season will qualify for the league playoffs. The Terriers will take a seven-game winning streak against UNH into tonight’s game in Boston at 7.

“BU is going to force you to take penalties because they’re skilled,” UNH coach Mike Souza said. “I just thought the ones we took to put ourselves down were not smart. (You) pay the price.”

BU, which fell 5-4 in overtime to Northeastern in the Beanpot championship game on Monday, scored twice in each of the first two periods to build a 4-1 advantage entering the second intermission.

The Terriers took a 2-0 lead and 15-11 shots-on-goal advantage into the first intermission despite not testing UNH junior goaltender Mike Robinson (27 saves) with a shot on frame until 5:36 into the opening period.

BU opened the game’s scoring at 9:28 when freshman Wilmer Skoog went top shelf from the right circle off a cross-ice feed from Kasper Kotkansalo. The Terriers doubled the advantage on Patrick Harper’s wrister from the right circle during a five-on-three power-play with 2:27 left in the first.

BU went on its first power play with 3:16 remaining in the first period after Ryan Verrier received a five-minute major hitting-from-behind penalty and a game misconduct. The Wildcats’ sophomore defenseman checked Terriers senior forward Gabriel Chabot into the left post of the UNH cage from behind. Verrier also suffered an ankle injury and Souza said he was unsure if Verrier would be available Saturday.

“We took too many penalties, myself included, and they’re a skilled team so they’re going to make you pay when you do that,” Wyse said.

“It took us a little while to get going,” O’Connell said. “It took us that penalty kill and we got a little momentum off that in the first period and then they took a couple penalties and kind of gave us a chance and opened a window and we took advantage.”

UNH freshman forward Chase Stevenson trimmed BU’s lead to 2-1 with his fourth goal of the season 3:27 into the second period. The Terriers responded with Trevor Zegras’ tally 1:57 later to regain their two-goal advantage.

Farrance capped the game’s scoring with his goal on a Terriers counter rush with 7:57 remaining in the second period.

“I had a good feeling when it went to 2-1,” Souza said. “I said, ‘We’ve been in that situation before.’ We’ve just kind of chipped away at games and typically don’t be ourselves.”

Stevenson, who missed UNH’s previous six games with an upper-body injury, received a pass from Eric Esposito on the left boards in the neutral zone before shooting through Terriers goaltender Sam Tucker’s pads in a one-on-one situation. Max Gildon earned the secondary assist on Stevenson’s tally.