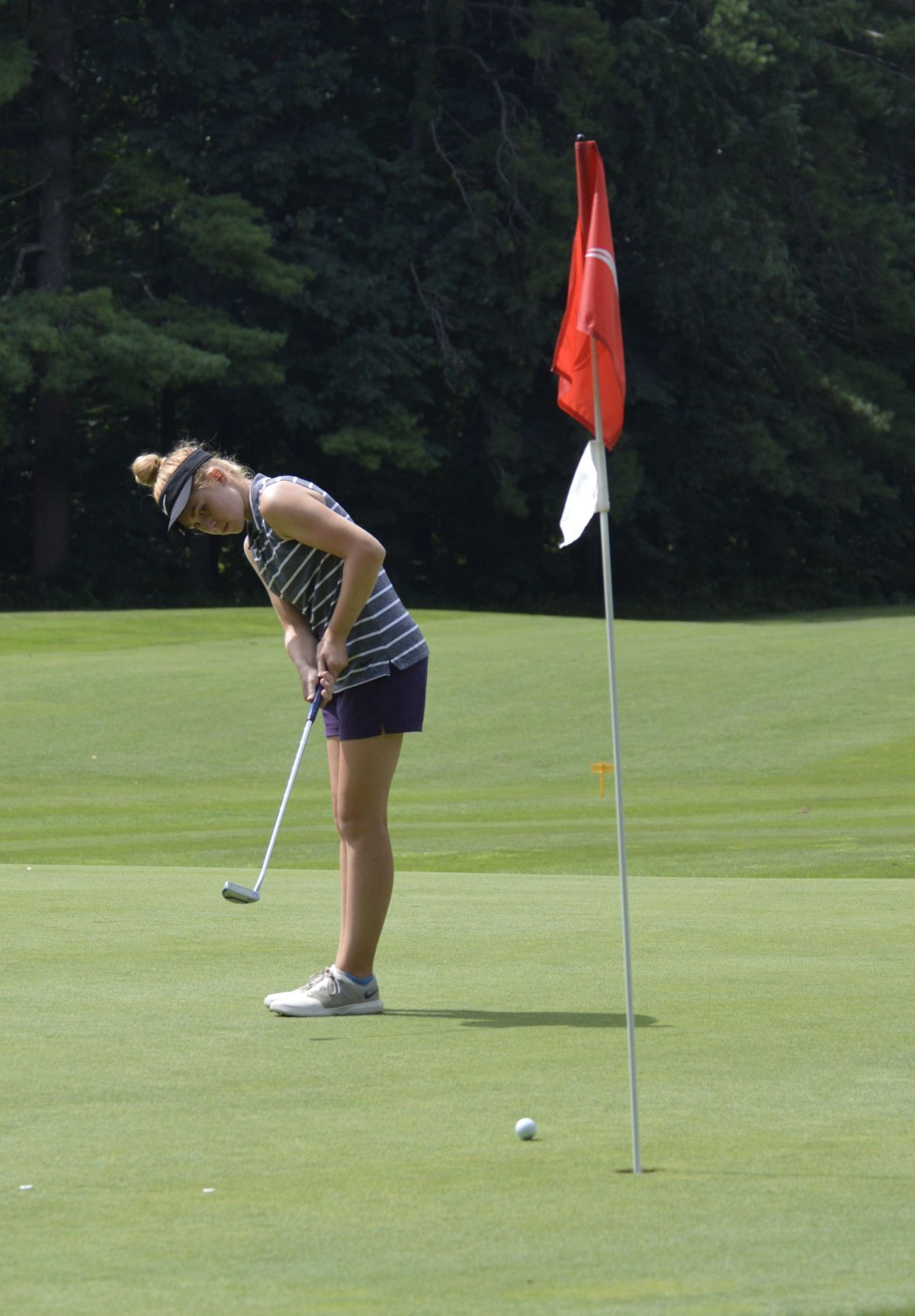 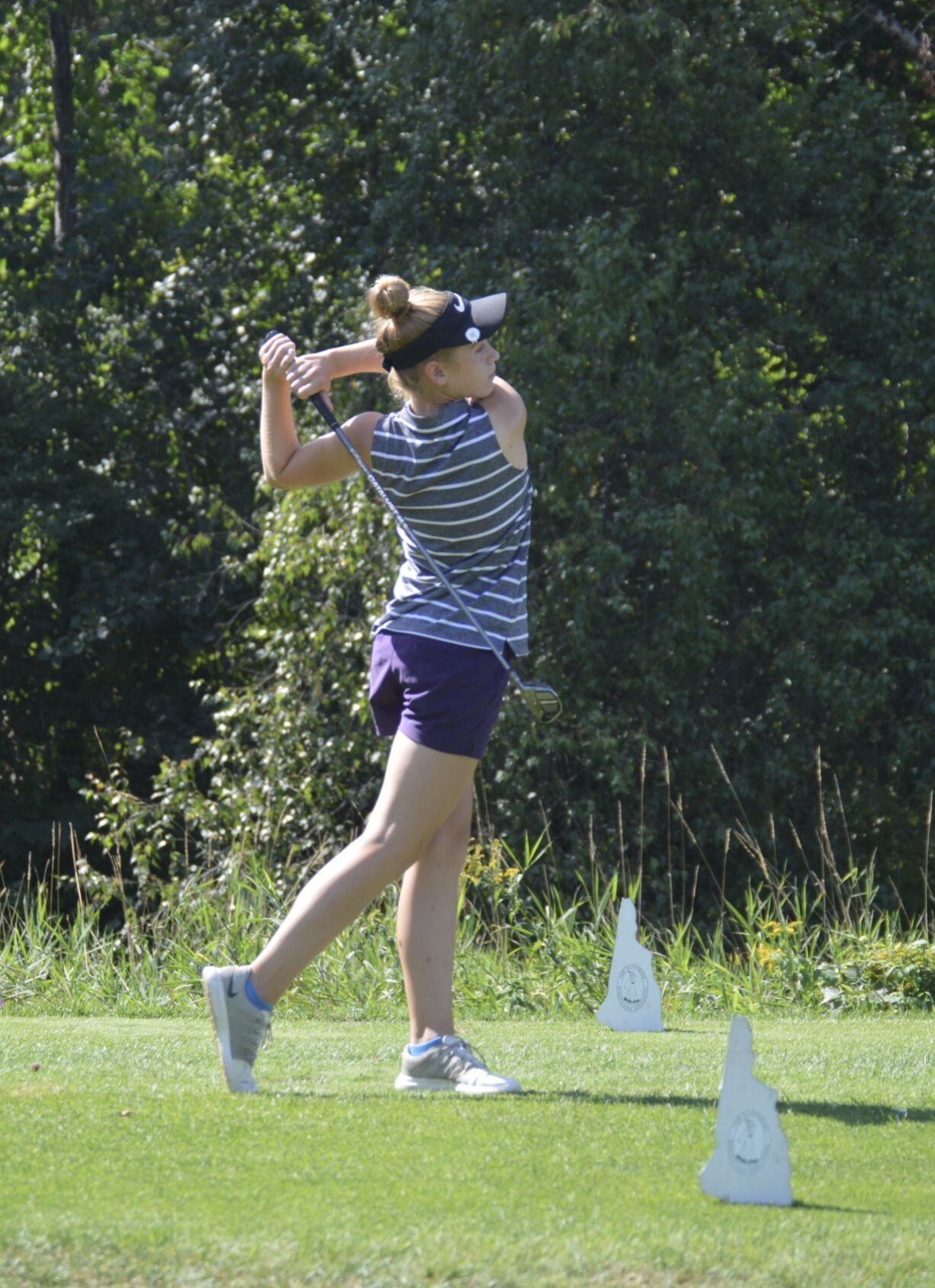 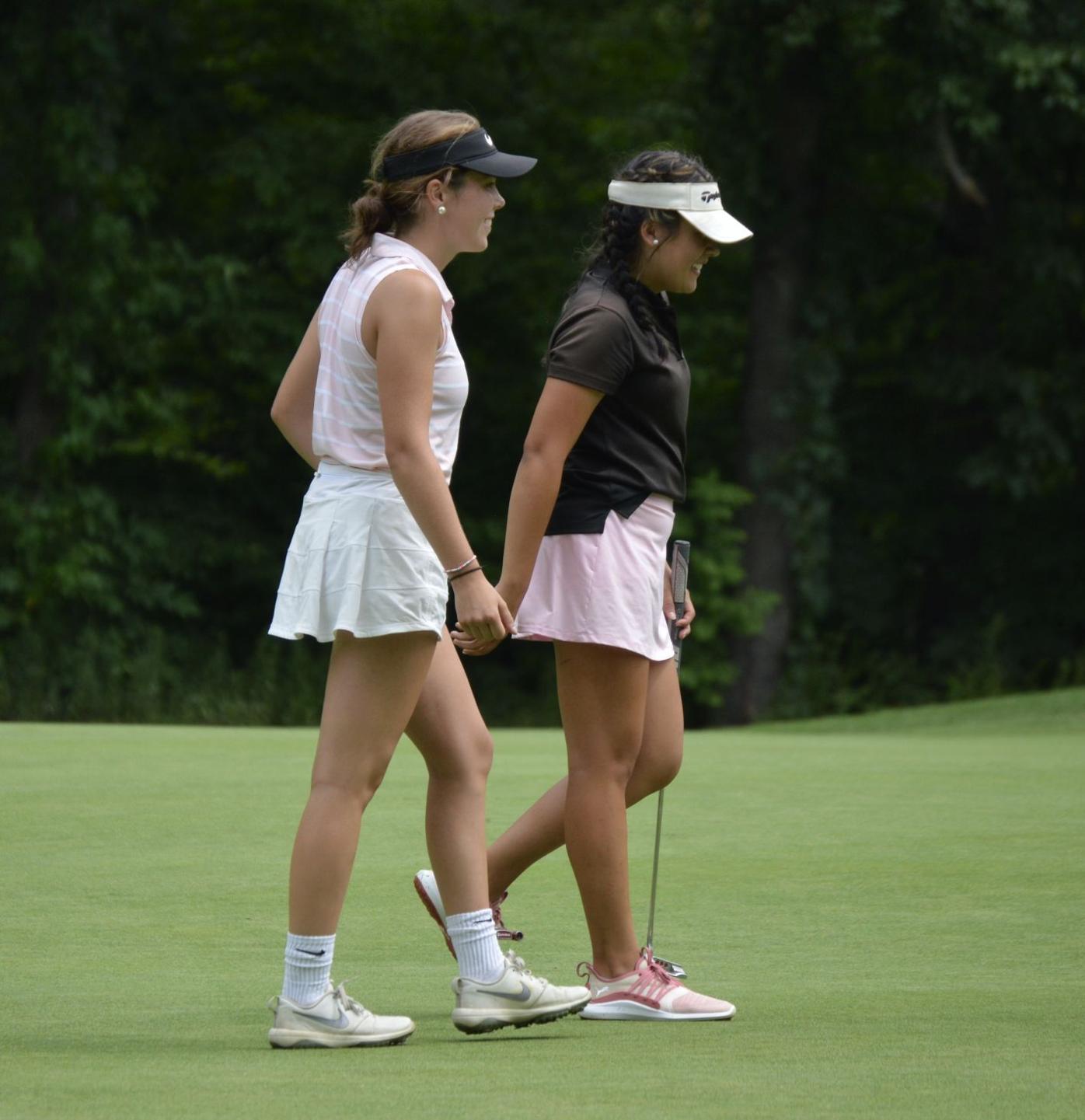 Natalie Morhun, left, and Eva Gonzales, who finished second and third overall, share a moment after finishing the 18th hole on Thursday.

Natalie Morhun, left, and Eva Gonzales, who finished second and third overall, share a moment after finishing the 18th hole on Thursday.

The 13-year-old Dover resident and Cochecho CC member shot a 2-under-par 70 to capture both the Junior 18-Hole Division and overall title.

Fennessy, a soon-to-be eighth grader at Dover Middle School, said she got whiplash after running into her fridge. The injury prevented her from competing in last week’s NHWGA Amateur Championship at Bretwood Golf Course in Keene.

Fennessy also won both the Junior 18-Hole Division and the overall title at last year’s NHWGA Junior Championship at Intervale CC in Manchester with a 2-under 71.

“It’s a cool experience,” Fennessy said of winning the tournament in consecutive summers. “I know a lot of people don’t get to do that and especially with it being at a new course this year, that was cool.”

Fennessy was 4-under at the turn after she carded birdies on Nos. 3 and 9 and an eagle on No. 4. She also bogeyed No. 10, double-bogeyed No. 11, birdied the 18th hole and parred the rest of the course.

“The first couple holes I parred and then birdied and I had one eagle and those got me ahead so I could make mistakes later on,” Fennessy said.

Natalie Morhun, a soon-to-be senior at Hanover High School and a member of Lake Morey CC of Fairlee, Vt., posted a 3-over 75 to win the 18-Hole Senior Division and finish as the overall runner-up.

Morhun, who placed 21st in the championship flight at the State Am last week, had never played at Amherst CC before Thursday’s tournament.

While she struggled on the front nine, Morhun said she improved her short game and gained confidence over the back nine. The Han-over resident was 5-over at the turn before she birdied Nos. 11 and 18. The birdie on 18 was almost an albatross (double eagle) when her second shot put her within three feet of the hole. She then missed the short putt.

“It was mostly those short-range shots,” Morhun said of her turnaround on the back nine. “I think from 100 yards and in, it was really important that I could get up and down and just make it one-putts and just really nail those.”

The tournament was Morhun’s last for the summer. She will now prepare for her senior campaign with the Hanover High girls’ golf team. The NHIAA golf season begins Sept. 10.

“I’m just excited to see what happens,” Morhun said of the upcoming high school season. “I think it will be an interesting year with the (COVID-19) virus but we’ll see what happens and I’m hoping for a great year.”

Windham CC’s Abby Zhu (5-over 77) and Hoodkroft CC of Derry’s Julianna Megan (6-over 78) rounded out the top five overall finishers.