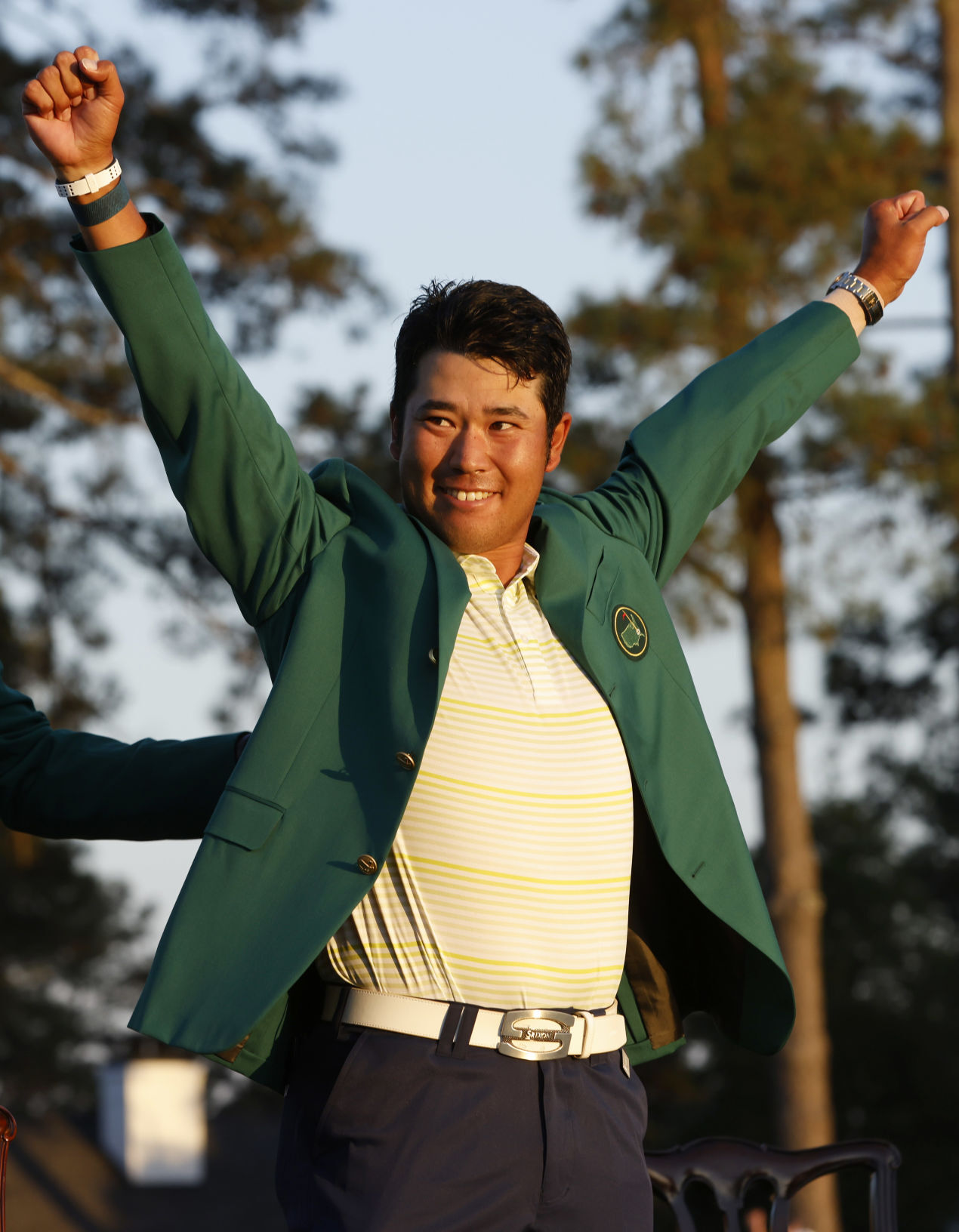 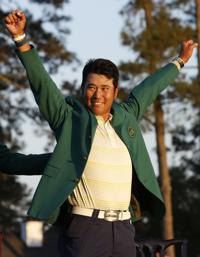 Hideki Matsuyama dons the traditional green jacket after winning the Masters on Sunday. 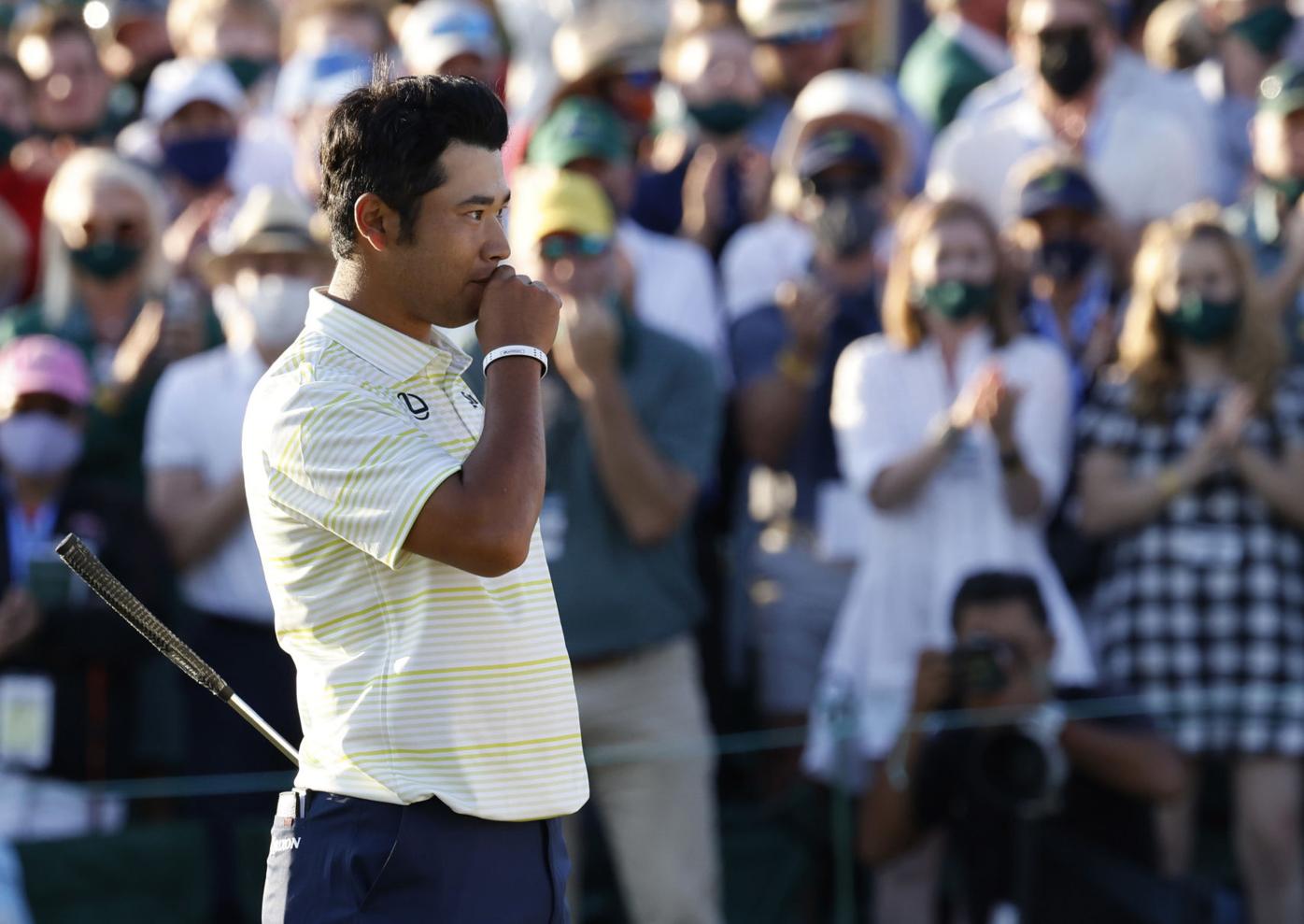 Hideki Matsuyama of Japan celebrates on the 18th green after winning The Masters on Sunday.

Hideki Matsuyama dons the traditional green jacket after winning the Masters on Sunday.

Hideki Matsuyama of Japan celebrates on the 18th green after winning The Masters on Sunday.

Japan’s Hideki Matsuyama secured a spot in golf history Sunday, winning the Masters and becoming the first of his countrymen to collect a major championship.

Despite three bogeys in five holes down the stretch, Matsuyama steadied himself and shot a 1-over-par 73 to secure a one-stroke victory at Augusta National, a win witnessed live by smaller galleries amid COVID-19 restrictions.

There was some drama on the 18th hole, after Matsuyama’s approach landed in the greenside bunker. He calmly blasted out of the sand, missed the putt, then tapped in for the win.

Newcomer Will Zalatoris, making his Masters debut, made a long par putt on 18 for a 2-under 70. He finished every round under par and finished alone in second at 9 under.

Matsuyama, 29, paved his path with a spectacular Saturday in which he built a four-shot lead on the field by playing the final eight holes in six under par.

Before Saturday, no Japanese golfer had led or been co-leader after any round of the Masters. Two Japanese women have won major championships.

Prior to this year, the best finishes by Japanese golfers in the Masters were Toshi Izawa, who tied for fourth in 2001, and Shingo Katayama, alone in fourth in 2009.

Matsuyama, who started Sunday with a four-shot lead, held off Xander Schauffele, who was paired with him and went bogey, bogey, double bogey on the front, but surged on the second nine with consecutive birdies on 12, 13, 14 and 15. But Schauffele’s tee shot landed in the water on the par-three 16th, and after a series of misfires he wound up with his first triple bogey in a major.

Schauffele tied for third at 7-under with three-time majors champion Jordan Spieth, who won last week for the first time in 3½ years.

Dustin Johnson, who set a scoring record (-20) in the postponed Masters, held in November, didn’t mount much of a title defense. He failed to make the cut.

Matsuyama won the 2010 Asia-Pacific Championship, securing an invitation to the Masters, becoming the first Japanese amateur to do so. In his first trip to Augusta National, he was the tournament’s low amateur and won the Silver Cup. He is the seventh one-time low amateur to win a green jacket.

This was his 10th Masters, with his previous best finish coming in 2015 when he was fifth.

In the most recent world rankings, Matsuyama is 25th and his last tour victory came in 2017, when he won three times. It had been 87 starts since his last win, at the MGC-Bridgestone Invitational.

Matsuyama had a bumpy start to his day with a bogey on No. 1, but as ESPN Stats and Info noted, multiple other Masters winners began Sunday with bogeys on that hole, among them Patrick Reed (2018), Adam Scott (2013), Bubba Watson (2012) and Trevor Immelman (2008).