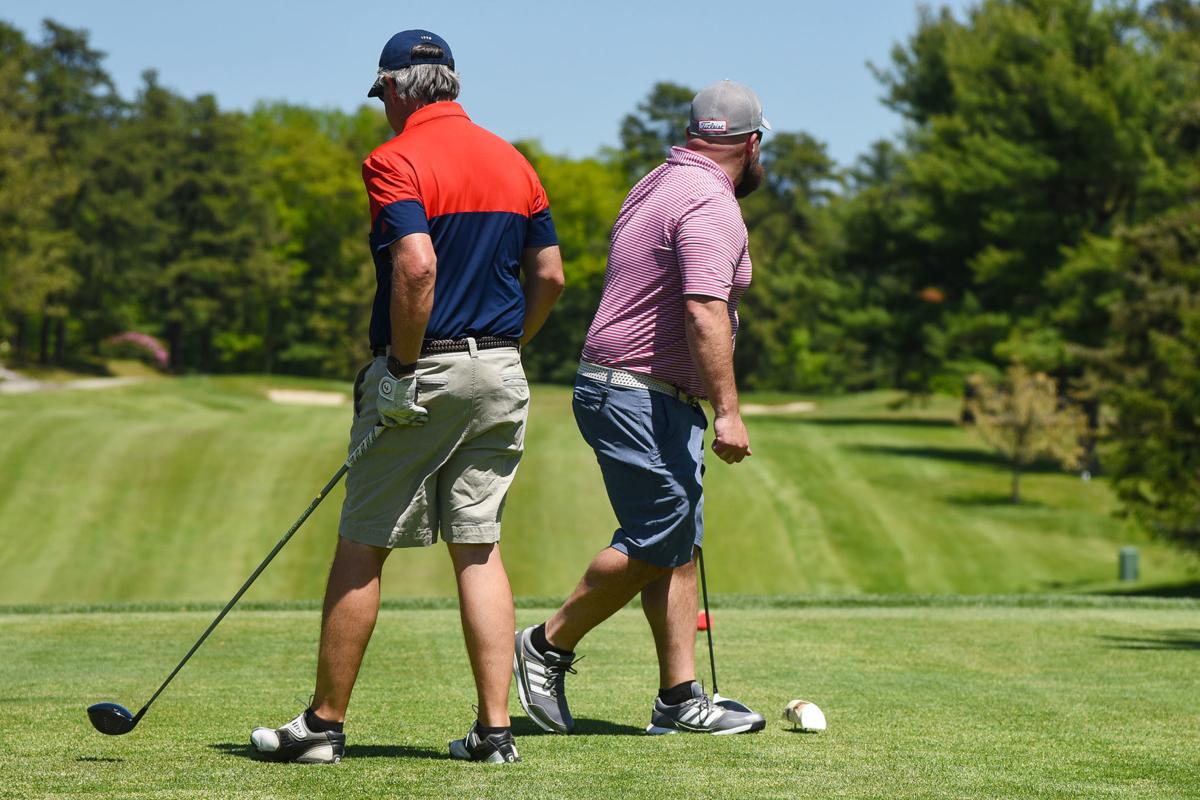 Jimmy Bither, right, of Tyngsborough, Mass., watches his ball on the fifth tee as David Roche, of Nashua, gets up to tee off at Nashua Country Club on Friday. 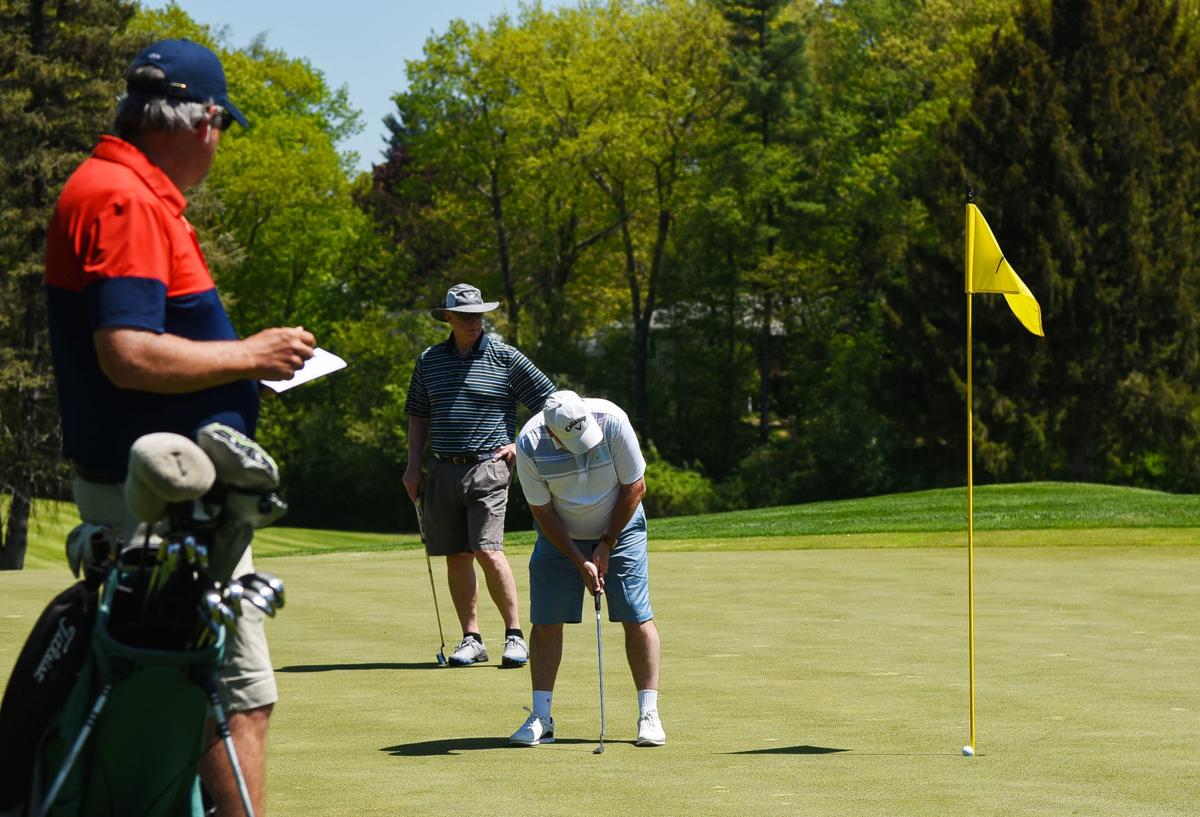 Neil Seymour of Hudson sinks his putt on the fourth green at Nashua Country Club on Friday. Nashua CC will host the State Am in July.

Jimmy Bither, right, of Tyngsborough, Mass., watches his ball on the fifth tee as David Roche, of Nashua, gets up to tee off at Nashua Country Club on Friday.

Neil Seymour of Hudson sinks his putt on the fourth green at Nashua Country Club on Friday. Nashua CC will host the State Am in July.

Tournament golf will be played this summer in New Hampshire, but the events will look different as a result of the coronavirus pandemic.

Matt Schmidt, president of the New Hampshire Golf Association, said courses around the state have had a successful opening, and these first few weeks of play will help courses get accustomed to the way events will need to be run, given the safety restrictions that will be in place.

“If we need to limit the field at the State Am, we’re going to have to do that,” Schmidt said. “I think everything’s on the table as far as how we’re going to run events.”

The NHGA postponed four May events until later in the season, so the year’s first event will be a one-day tournament on June 4 at Lake Sunapee Country Club. Schmidt said that experience should provide valuable information.

“It’s not going to be a typical experience where (players) could show up 45 minutes ahead of time,” he said, noting that restrictions will likely mean players will need more time than usual to prepare for rounds. “We’re going to make sure they’re adhering to the social distancing guidelines.”

There will likely be other changes.

“At some events we’ll stick to electronic scoring (on a mobile phone) instead of a scorecard so the players don’t have to exchange them,” Schmidt said.

“Post-round it’s going to be different. We’re not going to have a traditional scoring area,” he said. “They’ll give scores verbally” rather than hand over a scorecard.

And if clubhouses, which are closed for the moment, can be opened, the NHGA will have to work with courses on safe practices for that event.

“We’re going to work with the clubs on an event-by-event basis to see what they’re comfortable with players doing or not doing,” he said.

There was one casualty of the coronavirus. The New Hampshire Open, which includes professionals from all over the Northeast, was canceled owing to restrictions on players from out of state on New Hampshire courses. Schmidt said it’s the first time the Open has been canceled since World War II.

The New Hampshire Women’s Golf Association tells a similar story. Cindy McLaughlin, vice president and tournament chair of the NHWGA, said the organization’s first tournament will be on June 2.

The June 2 tournament, a one-day event, will be at Owl’s Nest in Thornton. The field was capped at 112 players because of social distancing restrictions, McLaughlin said, whereas normally 120-130 players participate.

The issue of capped fields and waiting lists, she said, will likely extend through the season because of the 12-minute interval between tee times and also because of the restriction on shotgun starts, where groups are placed at every hole on the course and begin at the same time. That allows more players to participate in an event.

“(Players are) going to have wait lists and they haven’t dealt with that” in the past, McLaughlin said. adding that the association will work with players wait-listed at one event to give priority at a future event.

“It’s a whole different world out there but you know what? You want to play golf, you abide by the rules,” she said. “We’ve had to modify the numbers (of players) and also modify that there’s really no banquets, (after events).” Like the NHGA, she added, paper scorecards will be abandoned in favor of digital scoring via cell phone.

Players participating in the NHWGA events will be updated on course regulations at each stop to ensure the safety of participants and staff. “We want to keep players and course staff safe,” she said.

“We have a course information sheet so every time you sign up for a tournament, you have no information on that course, what the COVID procedures are. Who would ever have thought you’d have to do that?” McLaughlin said.

The association had to cancel or postpone a number of events because of the pandemic. The annual Tri-State Tournament, pitting teams from New Hampshire, Maine and Vermont, had to be scrubbed because of restrictions over crossing state lines to play.

The state junior amateur has also been postponed from its original June 25 date, she said, but will be rescheduled at its original venue, Amherst Country Club.

“We’re hoping to move that a little later in the year and change the format a little bit,” she said. “We don’t want to disappoint everybody. Those poor little kids. They’ve already been through enough.”

McLaughlin praised golf courses around the state and their flexibility in the midst of the pandemic.

“The courses have been absolutely wonderful and they are really trying to help and work things out,” she said.

McLaughlin said players have been understanding as well.

“Any time there’s change, it’s a hard process but everybody’s been wonderful in the sense that they understand,” she said. “I think that they appreciate that we’re trying our best to have as many tournaments as possible.”

McLaughlin also said she was surprised by how many NHWGA members took to the courses as soon as they opened on May 11.

“I was thinking people would be scared and wouldn’t want to go out. We have an older crowd and we thought that would hold people back. Nope. People really want to play golf,” she said.

“People really want to be out there.”