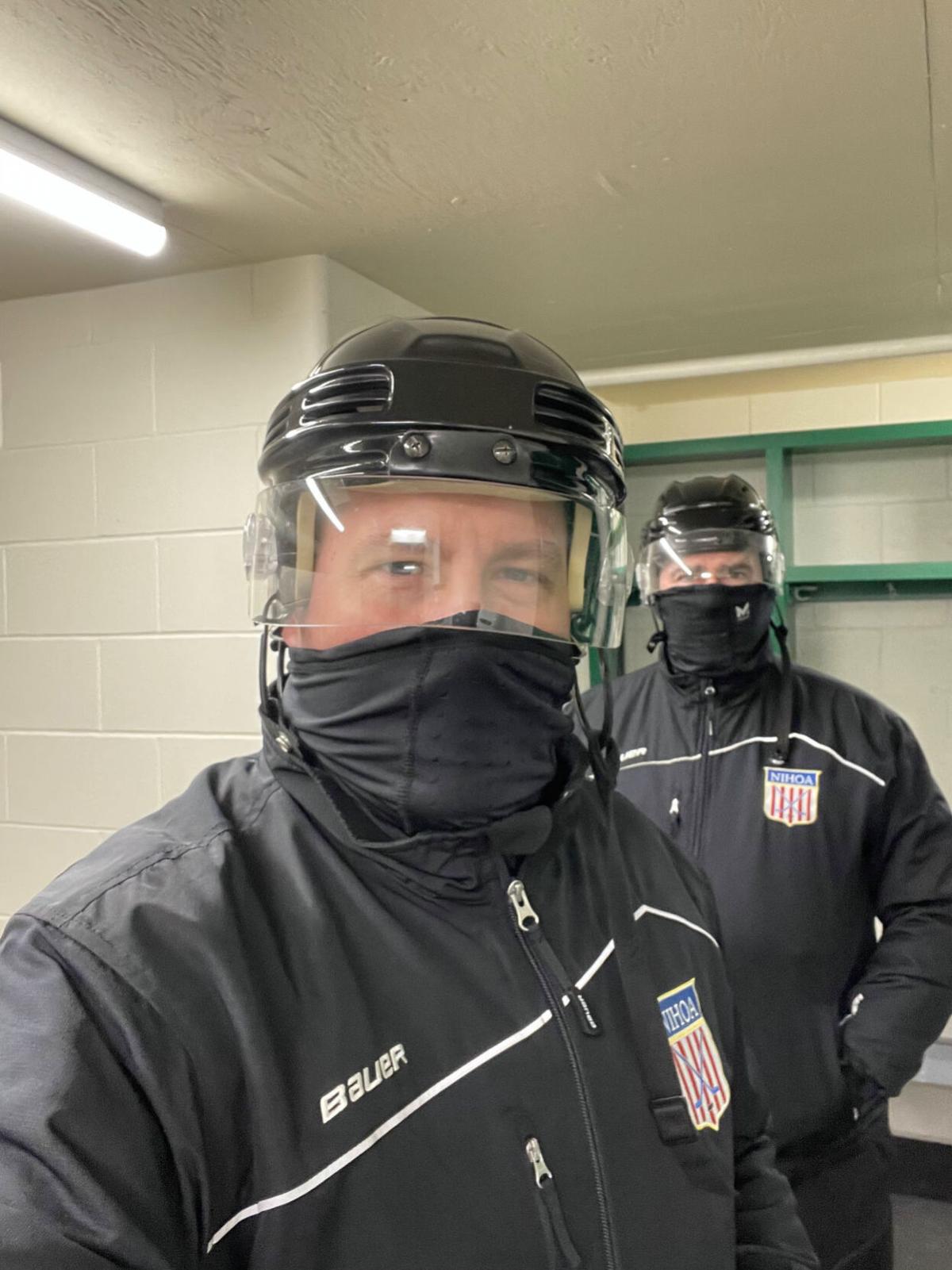 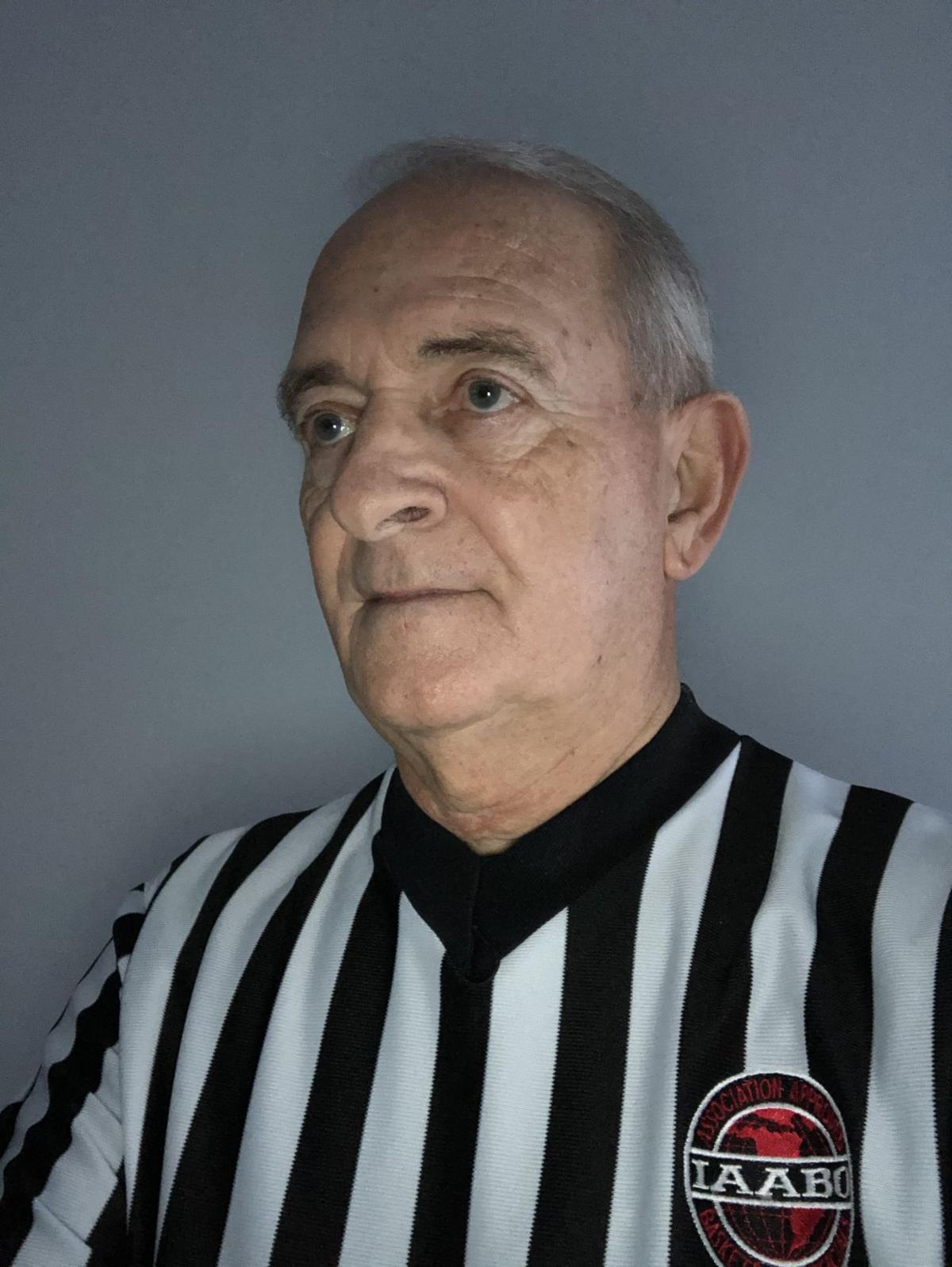 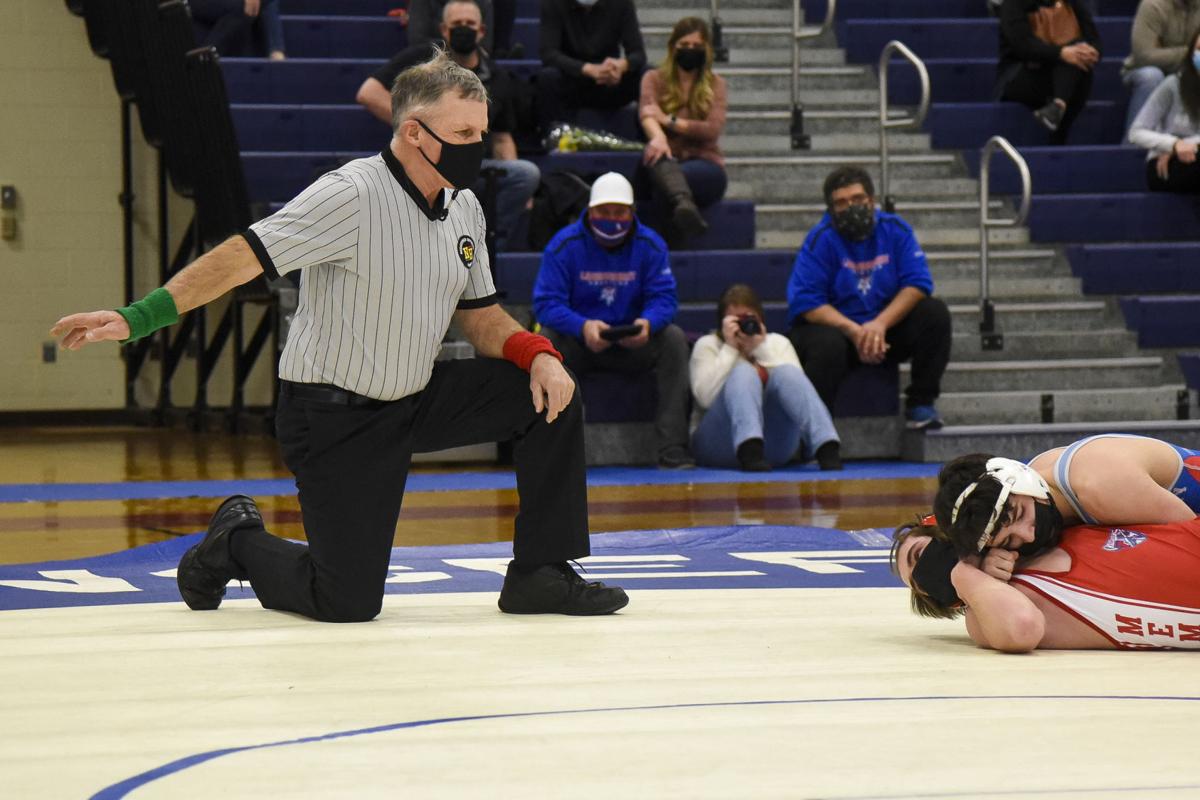 CONTRACTING COVID-19 is always in the back of Mike Frost’s mind.

But Frost, a 49-year-old Merrimack resident, has officiated high school hockey for 21 years and he’s not stopping now.

“We’re taking a chance as officials by doing the games but we’ve also all volunteered to do that,” Frost said. “But anything you do, anywhere you go, you can catch it anywhere.”

When Steve Burrows walked into the Spaulding High gym to referee his first basketball game this season, he noticed two chairs set up in the corner.

“That was our changing room,” Burrows said. “That’s when it hit me this was going to be a different year.”

Like players and coaches, this high school basketball and hockey season has been filled with challenges, changes and protocols for officials. Frost, president of the National Ice Hockey Officials Association’s New Hampshire chapter, said referees now have their own pregame preparation.

Officials check in with schools and hockey rinks to learn their protocols days before their scheduled games. Basketball and hockey officials who also referee prep school games are required by those schools to be tested weekly for COVID-19. Some NHIAA schools also require officials to get tested prior to refereeing their games, Frost said.

Tom Birmingham, the NIHOA New Hampshire chapter’s supervisor of officials and a member of the NHIAA Ice Hockey Committee, said many chapter member officials also get tested frequently for their jobs and some attend the University of New Hampshire, which tests its students twice a week.

Burrows, Frost, Birmingham and other basketball and hockey officials have received an increased workload and had to navigate the ever-changing regular-season schedules in both sports due to either COVID-19 or weather-related reasons.

Burrows, a Rochester resident who has officiated high school basketball for 33 years, said more than 100 members of the International Association of Approved Basketball Officials New Hampshire Board 32 chapter opted out of officiating this season due to the pandemic. That group included 12 of the top 15 rated officials on the Seacoast, he said.

“You take more than one-third away, it cuts away the (officials) assigner’s ability to assign a lot of different people a lot of different games,” Burrows said. “You end up with officials doing doubleheaders, which is not necessarily a good thing when officiating at a high level.”

Burrows, who received the John R. Clark Award for Officials from the Union Leader last year, had three doubleheaders scheduled last week, a number he said he never reaches during a normal season.

Birmingham, a 66-year-old Concord resident who has officiated high school hockey for 36 years, said the NIHOA New Hampshire chapter has about 35 of its 80 members officiating this winter. Frost said the chapter allowed members to take a year of leave due to the pandemic.

Basketball officials are assigned games close to where they live this season but hockey officials are traveling all over the state.

Bob Hodsdon, a 72-year-old Exeter resident who has officiated high school basketball for 51 years, said he has been fortunate to have only a few last-minute changes to his assigned games. He has heard about some colleagues who learned their game was canceled while driving there or had their game stopped at halftime due to a positive COVID-19 situation.

Birmingham said he has already had about three times as many cancelations than he typically does in a season.

“Normally the weather may take two or three games,” Birmingham said last week. “To this point in the season, I’ve had 19 games canceled so far.”

Once at the game, the biggest changes for officials this season have been varying locker room accessibility, wearing masks, using electronic whistles or masks that can fit a regular whistle inside them and staying socially distanced from players and coaches.

Because schools and rinks have different policies on locker-room access, many officials at least partially dress at home before traveling to their games. “I feel like I’m 10 years old again getting dressed for hockey at home,” Frost said.

Burrows said officials are often tasked with making sure players’ masks are worn properly during the game.

Hodsdon said almost all players are wearing masks this season but he has heard that there have been some games in which schools allowed their players to compete without wearing them. He is concerned he might have one of those games this week.

“I know I have a game coming up maybe (this) week, there’s a possibility teams may not wear masks,” Hodsdon said. “I’m going to try to find out beforehand because I personally will not feel comfortable in a gym in that situation.”

During games, the atmosphere is almost like that of a practice. Even at venues that allow a small number of fans to attend, Hodsdon and Birmingham said most crowds have been quiet and reserved.

Once the game is underway, though, Burrows and Frost agreed it is just like any other basketball or hockey game. “You officiate the same way and do the best you can with it,” Burrows said.

The new and numerous hurdles for officials this year have been manageable given the reward of having a winter season, Hodsdon said.

“Just to be able to go out and do games, see games being played, have it so high school players don’t lose another season, it’s worth it to go through the few difficulties we have to,” Hodsdon said.