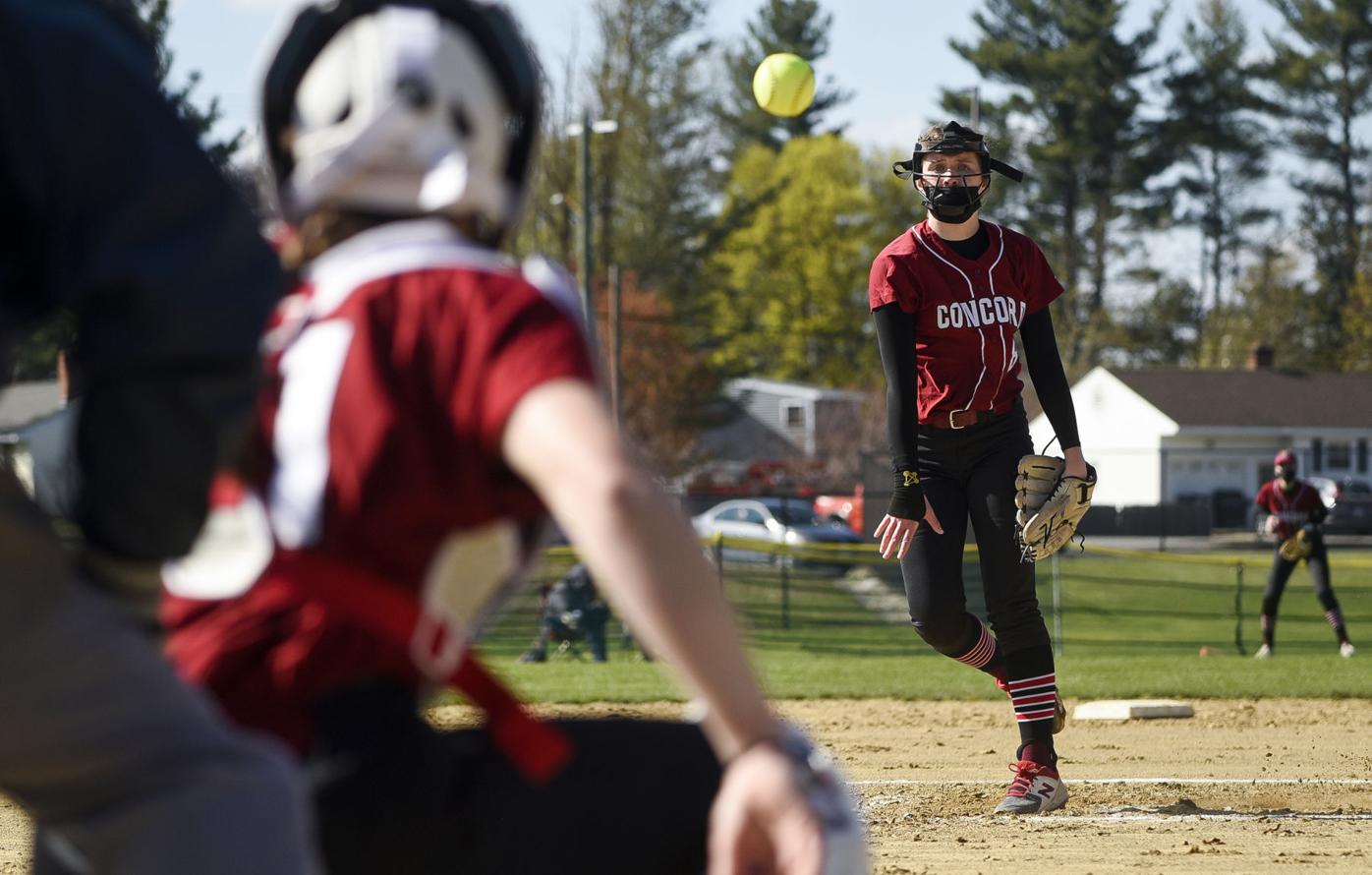 Concord pitcher Sarah Taylor and catcher Delaney Duford work on a Bishop Guertin batter in Nashua on Friday. Both Taylor and Duford are freshmen. 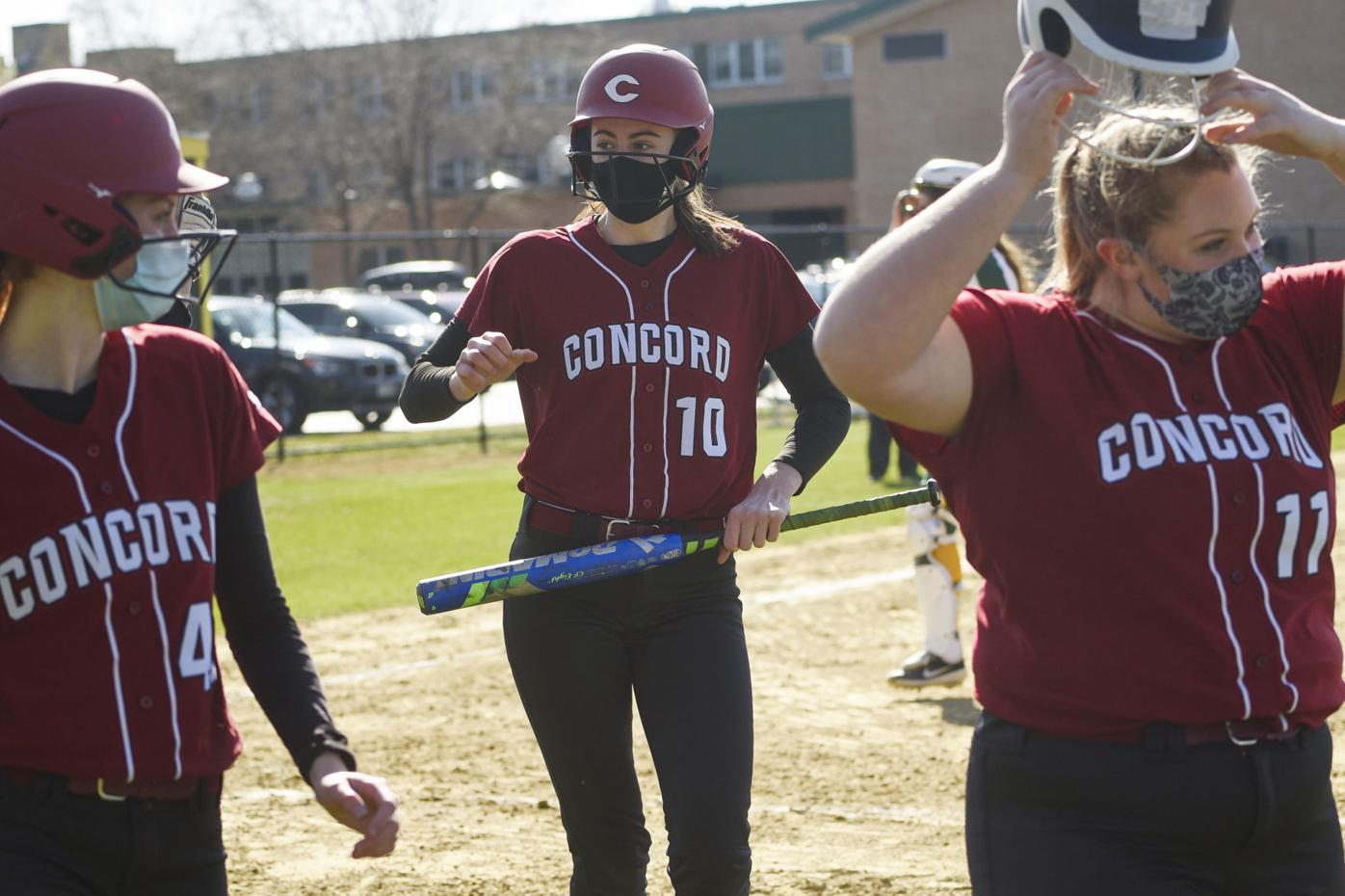 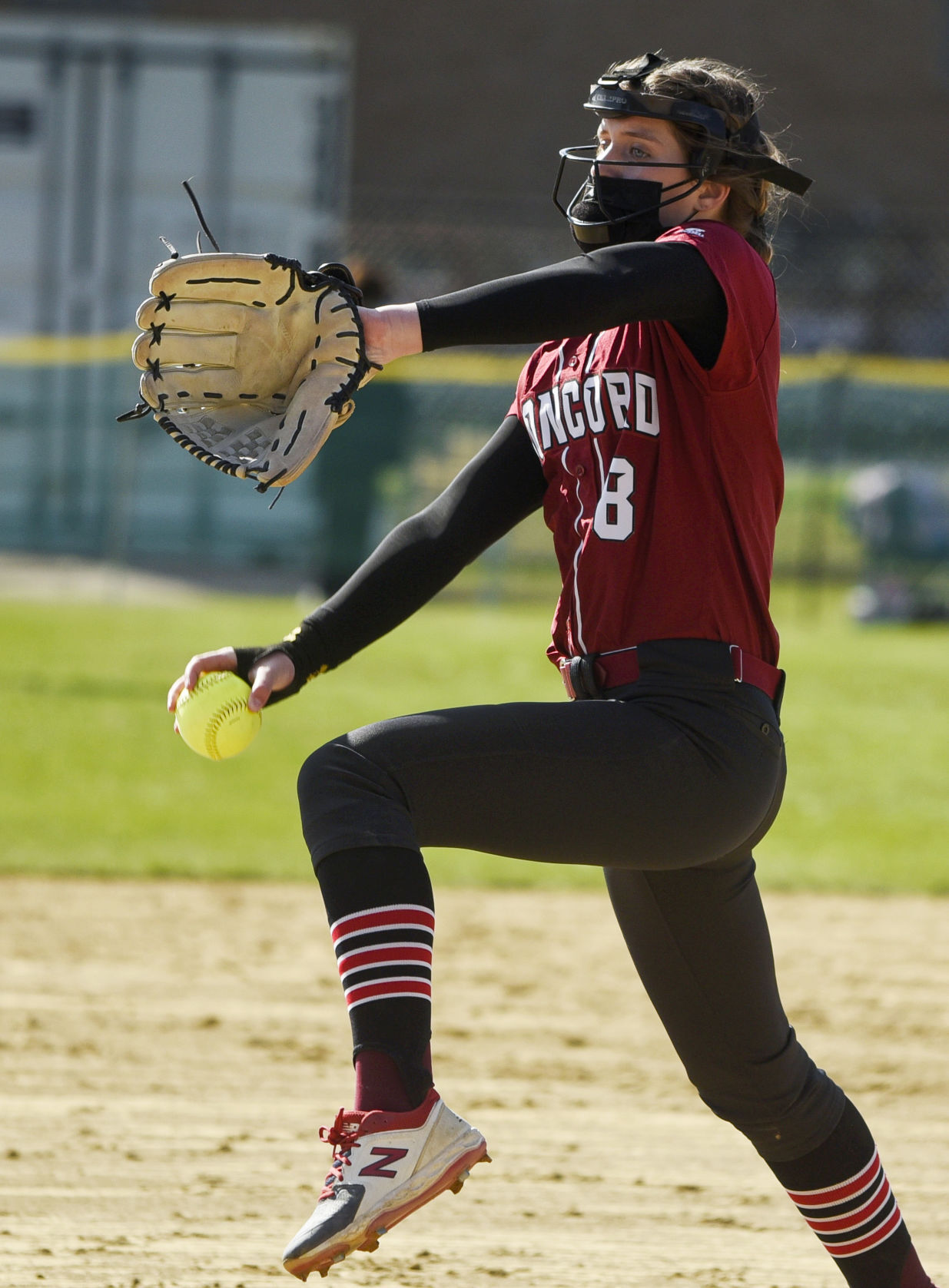 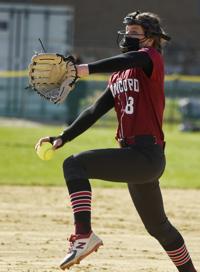 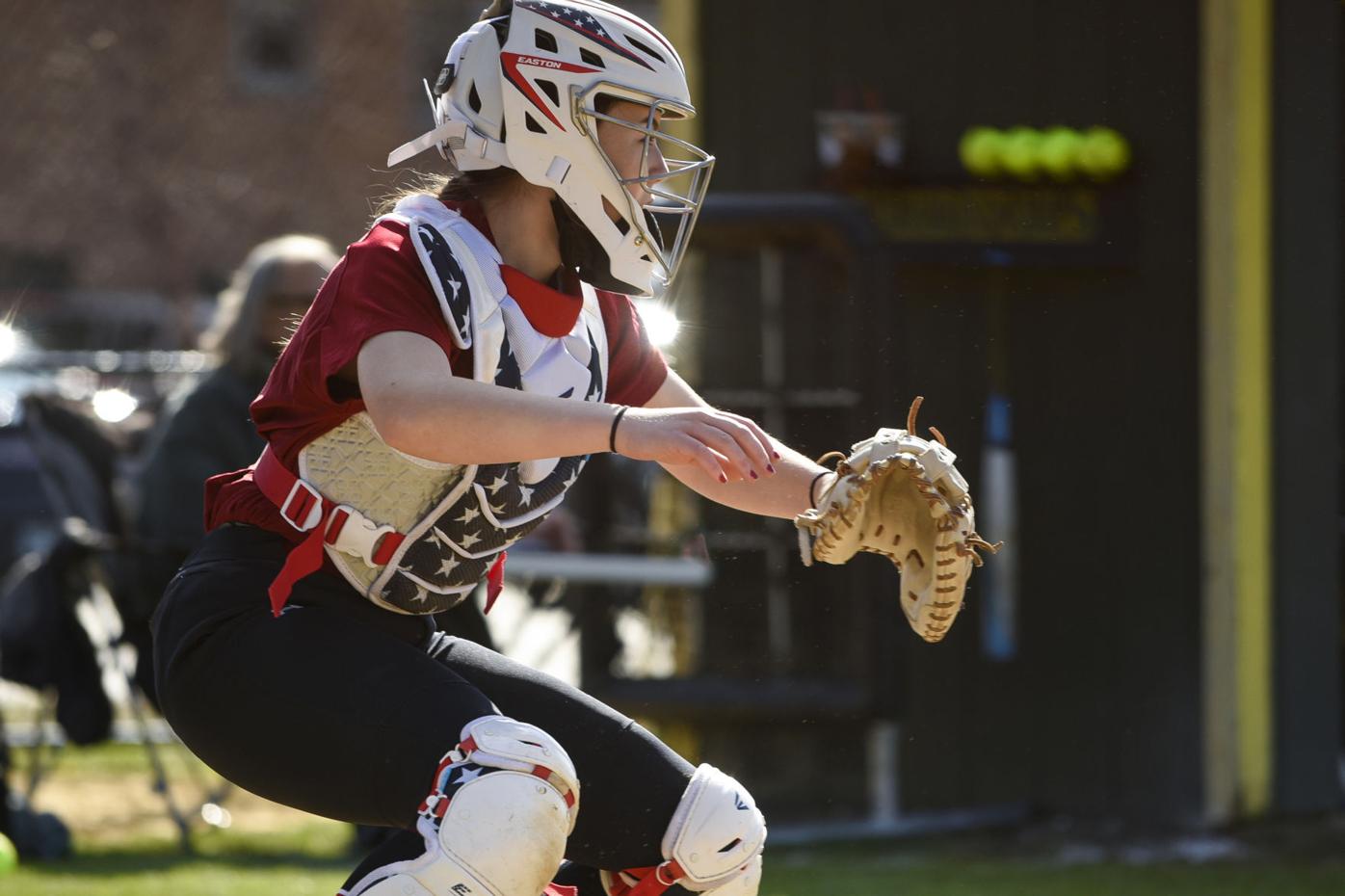 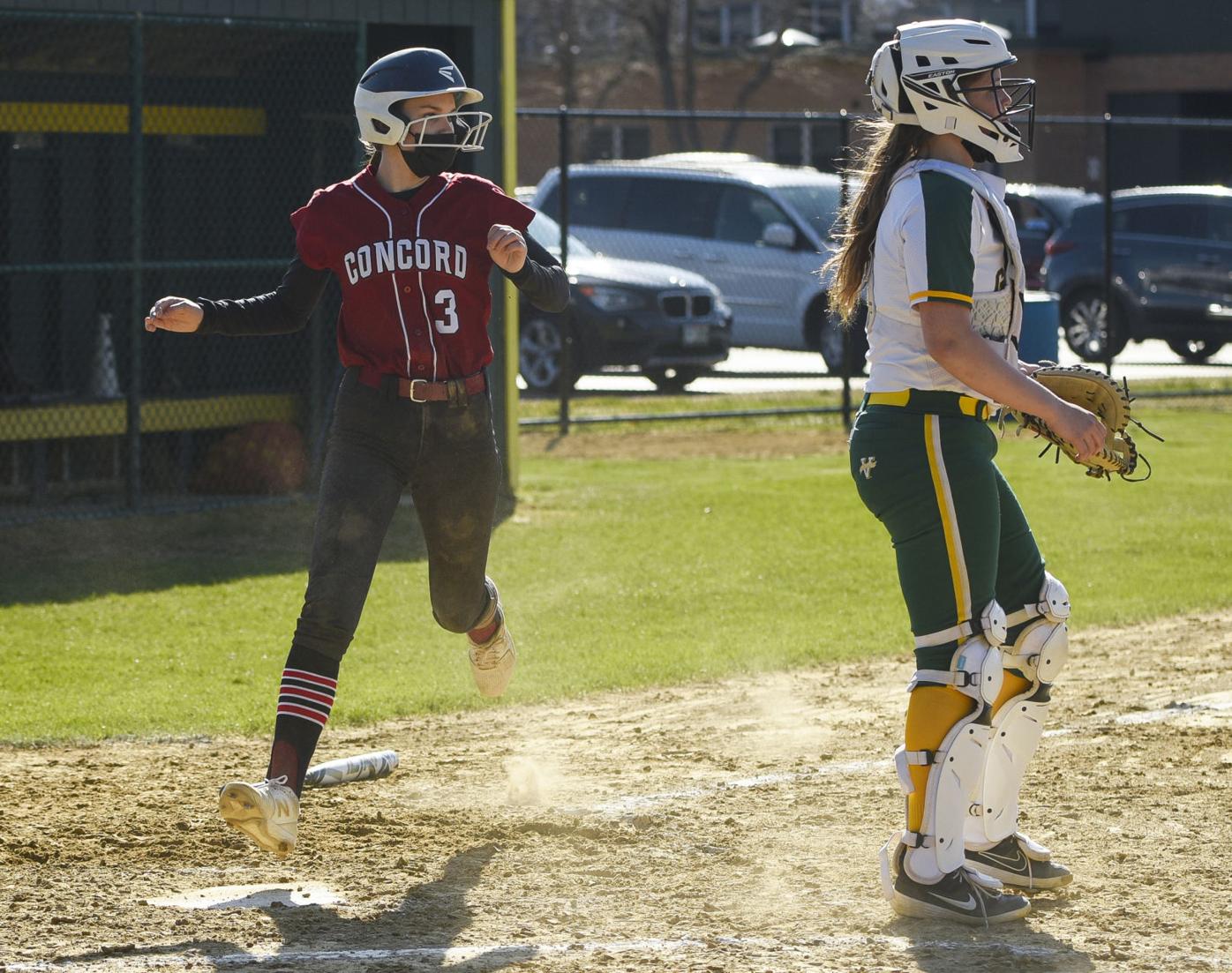 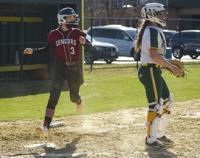 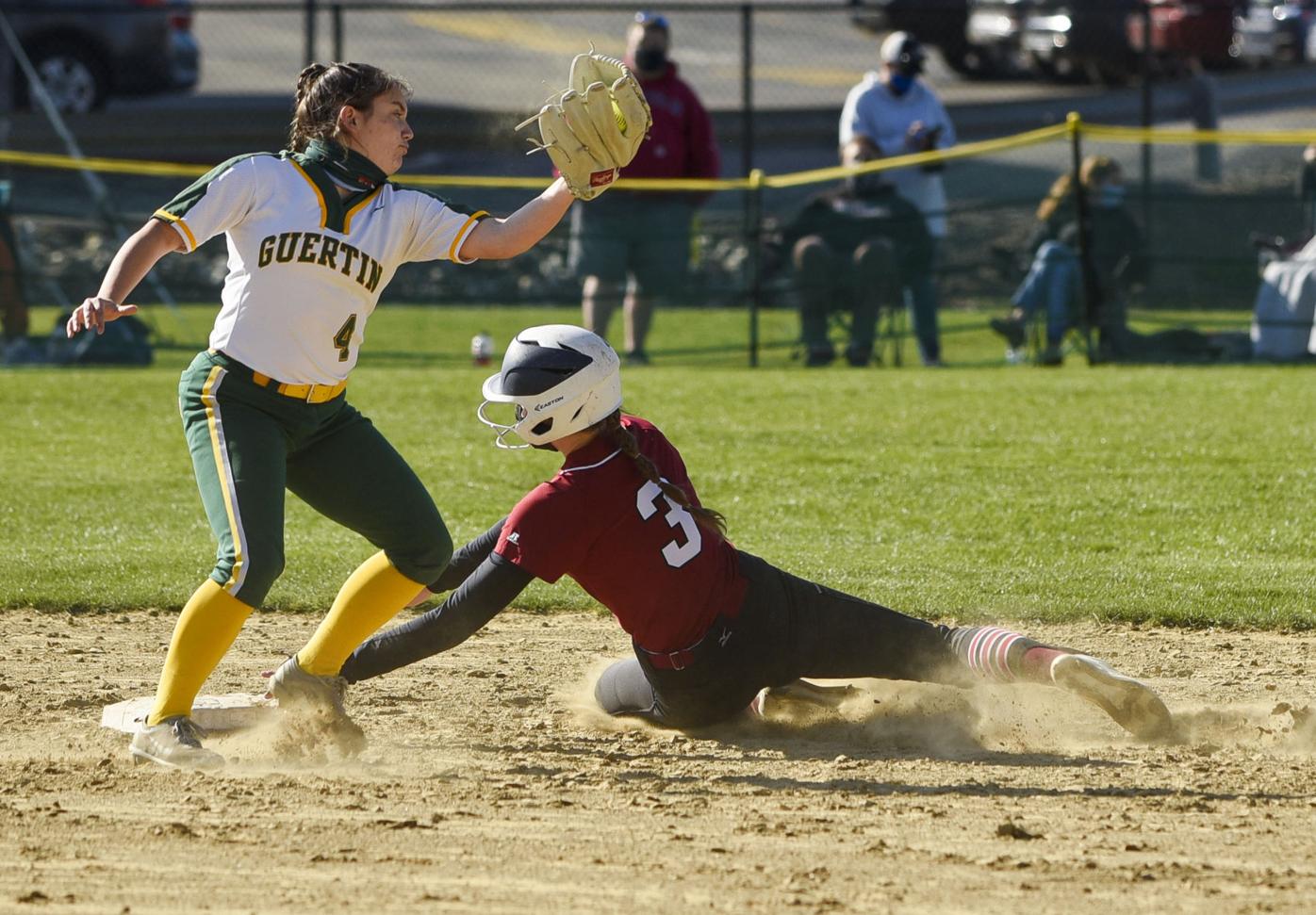 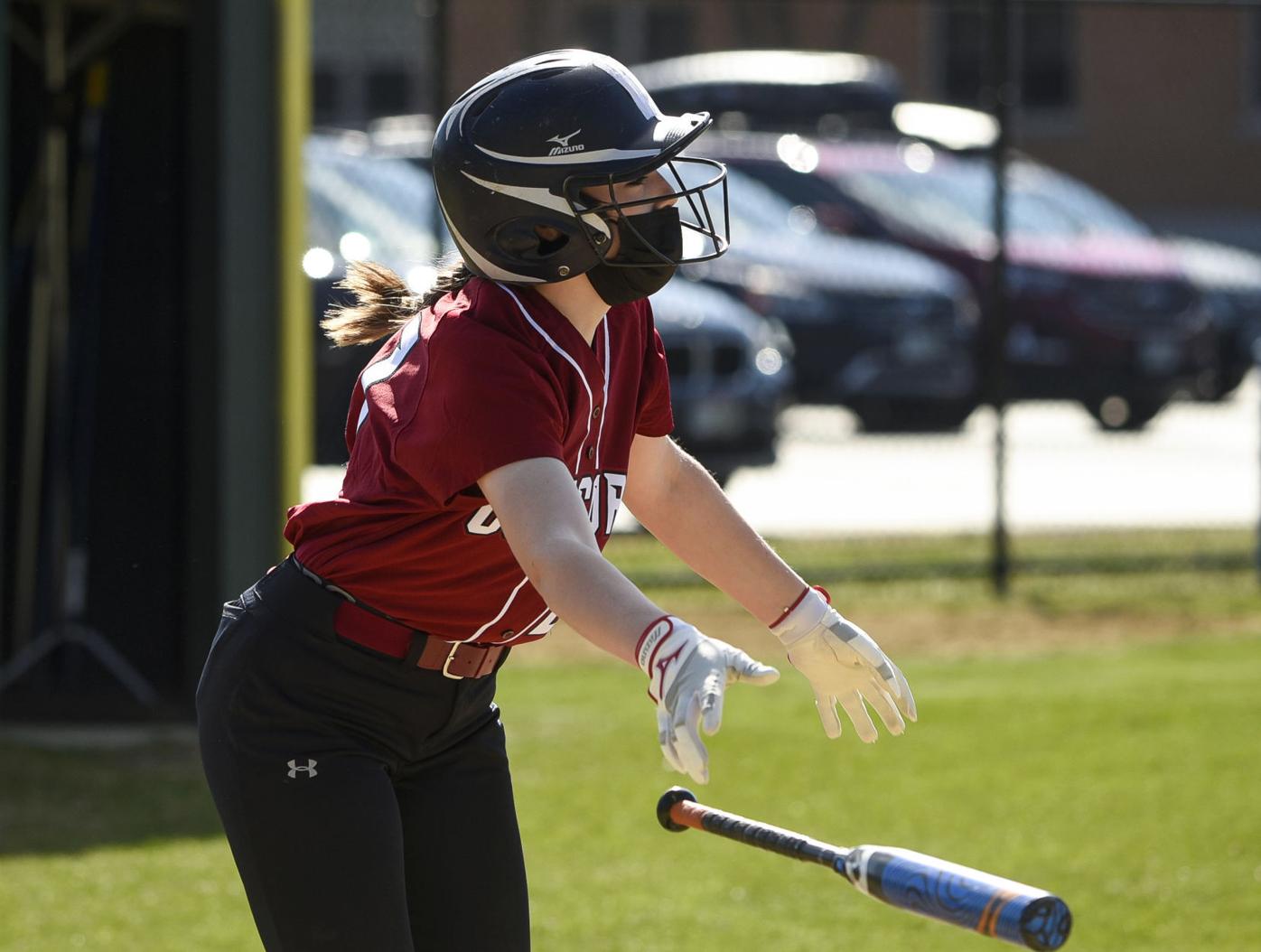 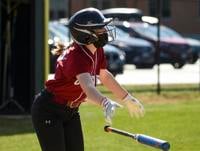 Concord pitcher Sarah Taylor and catcher Delaney Duford work on a Bishop Guertin batter in Nashua on Friday. Both Taylor and Duford are freshmen.

OVER his 20 seasons leading the Concord High School softball team, coach Duke Sawyer said he thinks this is his first in which he has carried three freshmen on his varsity roster.

Sawyer also has two sophomores, Kennedy Ramos and Olivia Crawford, who are first-year players because they missed their freshman campaigns last spring, when the NHIAA season was canceled due to the COVID-19 pandemic.

Despite their lack of varsity experience, Concord’s underclassmen have made an immediate impact, a theme several teams across the state have enjoyed.

Starting with the Crimson Tide’s five, here are some of the early underclassmen softball standouts.

Duford has been the primary catcher for Taylor and Watcher. Sawyer said Duford has caught Taylor for two or three years and also has previously caught for Wachter before high school.

Taylor earned the win after four relief innings in Concord’s 11-inning 5-3 win at Bedford on April 14. She allowed one earned run on three hits alongside seven strikeouts. At the plate, Taylor went 5-for-10 with four RBIs over Concord’s first three games.

“They’ve moved the ball well, they’re throwing strikes, they have good poise on the mound,” Sawyer said of Taylor and Wachter.

Ramos went 1-for-2 with an RBI and Crawford, who Sawyer said is probably Concord’s fastest player, went 0-for-2 and was often used as a courtesy runner over the Crimson Tide’s first three games.

“I’ve been impressed with the whole (underclassman) group,” Sawyer said. “All five work hard in practice. They want to do well. They play in the summer, which is always a plus for me. I think that helps them coming in. As young as they are, they play so many games over the summer in that 16-18 age bracket that they’ve faced pretty good players already.”

“Kate has good range, a strong arm, she’s real fast so she brings the speed we need at the top of the lineup,” Warriors coach Dennis Bruce said. “Z is a contact hitter. She doesn’t strike out...Maddie is making good contact, too. They’ve all been making solid contact.”

Eaton went 5-for-16 with two runs scored, five RBIs and one walk and struck out six batters in two innings of hitless relief over Winnacunnet’s 5-0 start to the season. Eaton is learning behind Winnacunnet star hurler and senior captain Macie Harkovich (5-0, 1.5 ERA, 31 strikeouts).

“She keeps the ball down, she has decent speed but not overpowering,” Bruce said of Eaton. “I was talking to her pitching coach the other day. He said she has the hardest balls to pick up. They’re real heavy (so she gets) a lot of ground balls. She’s another one (I see) big things for her in the future.”

Spaulding coach Sheila Colson described McLaren, who is the Red Raiders’ leadoff hitter, as a confident, quick, all-around athlete with good hands and knowledge of the game.

Dionne, who bats in either the No. 4 or No. 5 spot, is confident, not afraid of the ball, has a strong arm, good reaction and serves as a quiet leader, Colson said. “She just keeps working hard and wants to get better,” Colson said of Dionne.

Ziadeh has played only one game so far but Colson described her as a tall kid who can stretch, has a strong arm and power at the plate.

“Really, the approach has been try to keep them calm, relaxed, know they’ll make mistakes and let’s just improve game to game, which we’re starting to see after three games,” Colson said.

Runge is going to be something special and already has been for the Astros, first-year coach Tom Wall said.

Runge belted a two-run home run on the first pitch in her first varsity at-bat, had an RBI in each of Pinkerton’s first three games and owns a 2-0 record in the circle. The right-handed batter and pitcher twirled a four-hitter and struck out seven batters in the Astros’ 5-1 win at Bishop Guertin of Nashua last Monday. Runge, who is Pinkerton’s lone varsity underclassman, is currently batting in the cleanup spot.

“To look at her, you’d never think she was a freshman,” Wall said of Runge. “The way she carries herself, the way she goes about her business, she’s responsible ... it’s like somebody who has been there already for two or three years.”

Tomahawks coach Greg Cochrane said Hui, whose older sister, Lindsey, is a senior captain, works hard in practice and is off to a phenomenal start.

“Avery has confidence and composure in the game beyond her years,” Cochrane said in an email. “Avery’s composure is one of her best qualities. Avery is also a fierce competitor who wants the ball in her hand.”

Over St. Thomas Aquinas of Dover’s 6-0 season-opening loss to Winnacunnet and 7-1 win over Pelham, von der Linden allowed four earned runs on eight hits and three walks and struck out 24 batters over 13 innings. She struck out the side three times en route to 16 overall against the Pythons.

At the plate over those two games, she went 4-for-8 with a two-run home run.

Bruce predicted that von der Linden will dominate in the circle at the Division III level.

“From the moment she steps on the mound, she has a big presence on the field,” St. Thomas coach McKenzie McGrath said of von der Linden in an email. “Once Ash zones in and finds her groove, she’s hard to stop, especially with her speed. Offensively, she has a lot of power and hits the ball hard. She is certainly an exciting player to watch and the fact that she’s only a sophomore, I know her best years are definitely ahead of her.”

In 2019, the Exeter boys lacrosse team had arguably the best goalkeeper in Division I in Henry Vogt, who is now a freshman at Merrimack College. This season, the Blue Hawks have two underclassmen with different skill sets filling the cage Vogt left behind.

Freshman Ethan Bernich and sophomore Ryan Tatman have split time in goal for the Blue Hawks so far this season. The duo combined for nine saves over one half each in Exeter’s 16-2 win at Souhegan of Amherst last Tuesday. Bernich played the first three quarters before Tatman came in for the final 12 minutes in the Blue Hawks’ 18-8 season-opening win at Nashua South on April 12.

Blue Hawks coach Gerry Holly said Bernich and Tatman are completely different kinds of goalies. Holly described Tatman as a little more active and jitterbug-like — a goalie that likes to be in the mix of the play. Bernich is a calmer and laid back, typical goalie, Holly said.

“They’re getting better, they’re competing and that’s what we want,” Holly said after Tuesday’s win at Souhegan. “Our goal is that we want to be playing our best lacrosse in May at Memorial Day and that’s really what we’re trying to do is just get guys time, get them experience, as many reps as possible before we hit the playoffs.”

Ryan McCrumb scored the first varsity goal in program history and teammate Jared O’Connor made 21 saves for the Hillsboro-Deering boys lacrosse team in its inaugural game, an 18-1 loss to Trinity last Tuesday.

Last Monday marked a big day for Wachter’s older brothers on the Concord baseball team. Nate Wachter went 3-for-4, including a three-run home run, and Jonah Wachter tossed a one-hitter with 13 strikeouts and three walks in Concord’s 8-0 win at Goffstown.

NH High Schools with Alex Hall runs Sundays during the season. Alex can be reached at ahall@unionleader.com.