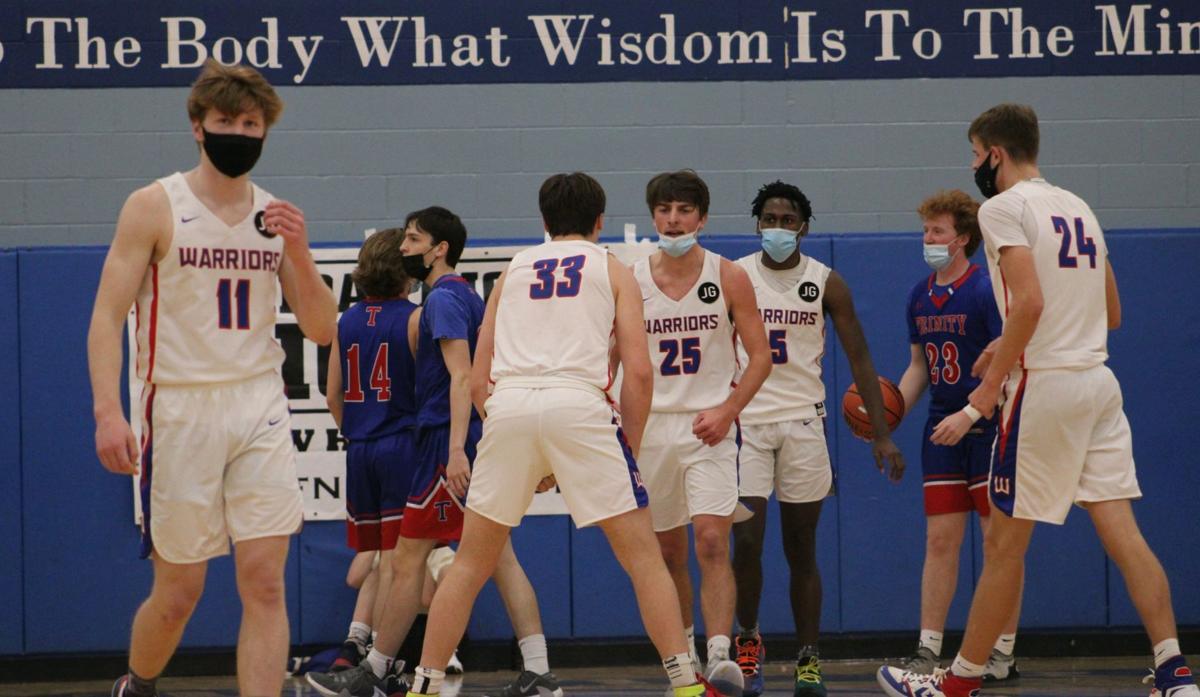 Winnacunnet players celebate after a three-point play by Sam Andreottola (33) gave the Warriors a 20-17 halftime lead in Wednesday's state Division I semifinals. 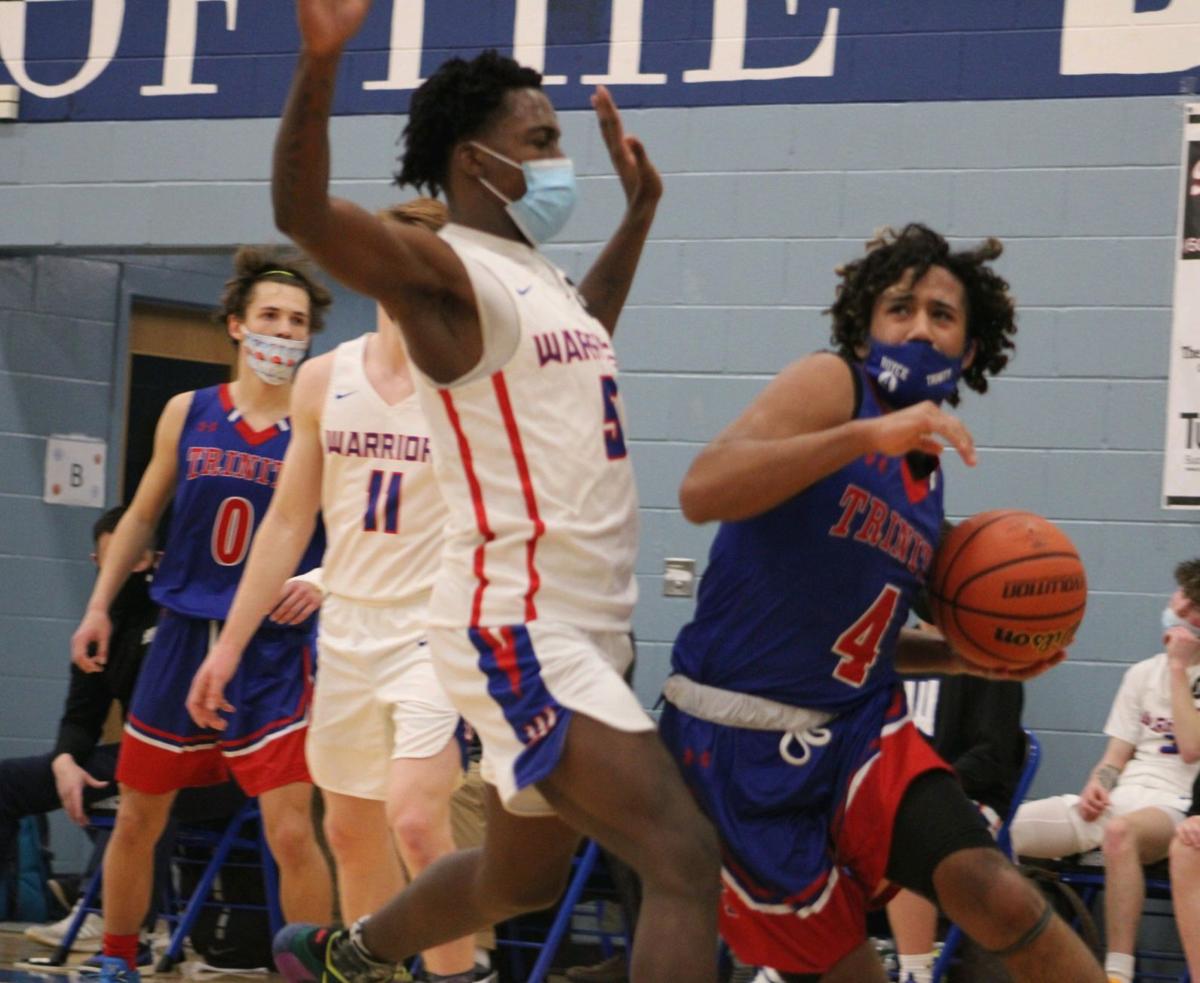 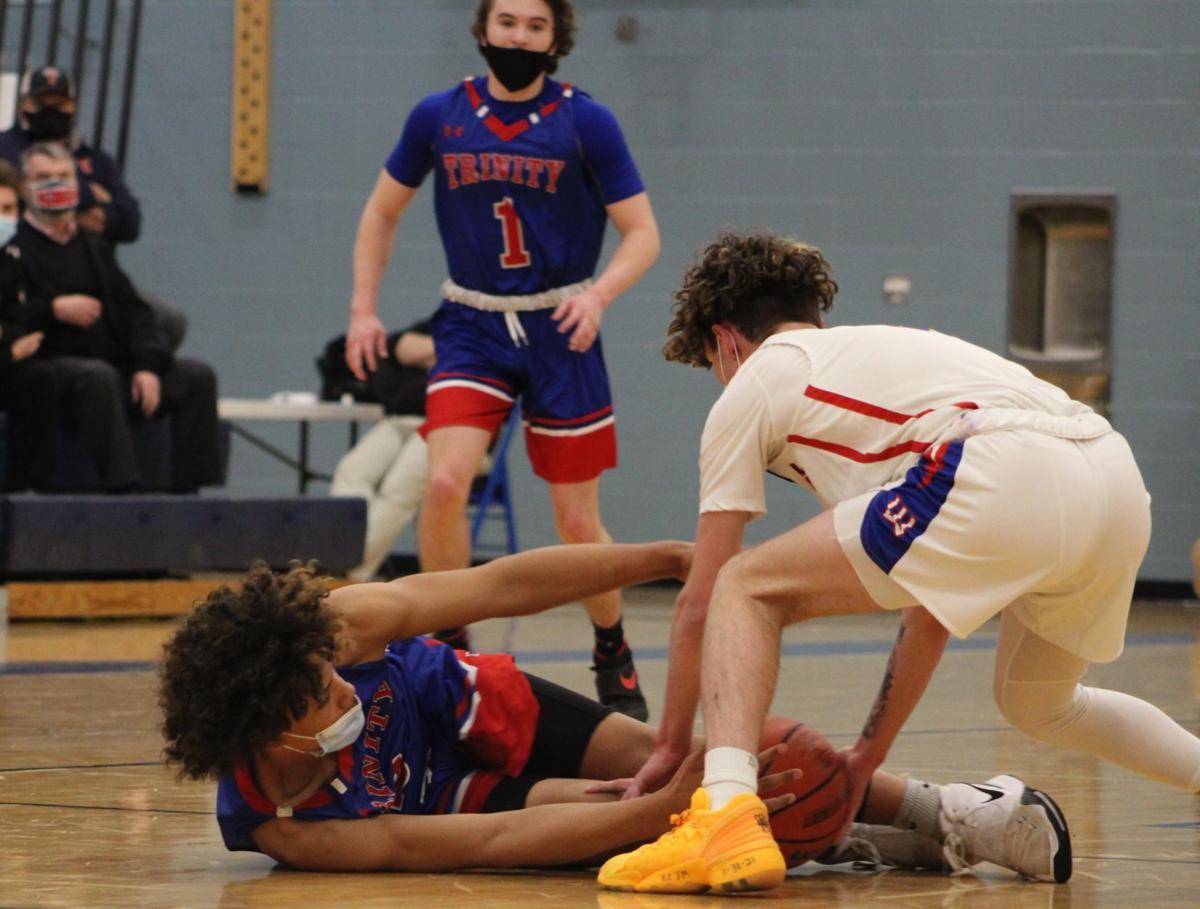 Trinity's Royce Williams, left, and Winnacunnet's Braiden Burns battle for a loose ball during the second quarter of Wednesday's semifinal. 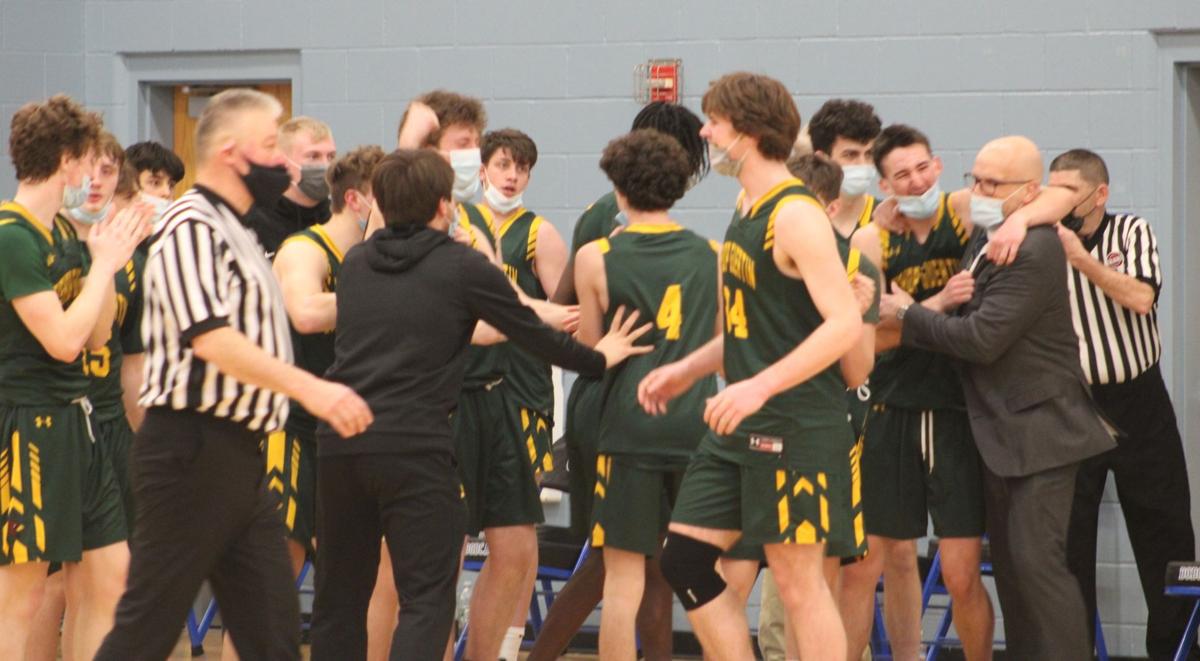 Winnacunnet players celebate after a three-point play by Sam Andreottola (33) gave the Warriors a 20-17 halftime lead in Wednesday's state Division I semifinals.

Trinity's Royce Williams, left, and Winnacunnet's Braiden Burns battle for a loose ball during the second quarter of Wednesday's semifinal.

DURHAM — When Jay McKenna played for his legendary coach Jack Ford at Winnacunnet High School in the early 1990s, Ford always said it’s never a bad season if it ends in Durham, in reference to making a tournament run and get a chance to play at University of New Hampshire’s Lundholm Gymnasium.

Well, even with a pandemic, the Warriors will still be playing the final games of the the Division I boys basketball season in Durham, albeit at Oyster River High school.

Despite the efforts of Trinity guard Royce Williams, Winnacunnet’s size was too much for the Pioneers to overcome in the Warriors’ 61-48 victory. Williams almost single-handedly kept Trinity in the game with 31 points and rallied the Pioneers to within 44-41 before the Warriors imposed their will down the stretch.

This is Winnacunnet’s first championship appearance since it dropped a 61-59, double-overtime decision to Pinkerton Academy in 2010.

Sam Andeottola controlled the paint all night and finished with 21 points, while Brett Marelli added 13. Andeottola sent the Warriors into halftime with a 20-17 lead on a three-point play with five seconds left in the second quarter.

“I knew if we were going to win, I needed to come out and play my best game, and I was hitting my shots and the whole team was hitting their shots,” Andeottola said. “”We expected them to go on a run and with a player like Royce, we knew we just had to withstand that run. If we just stuck strong, played defense and not let them beat us up, we knew we’d win that game.”

“Royce played great and the second half, he really stepped it up when we needed him to,” Trinity coach Keith Bike said. “I know he struggled in the first, but scoring 17 points for us is not normal.

“Usually we come out on fire, so that was a different avenue we had to take for the game.”

Marrelli stopped Trinity’s run, while back-to-back putbacks by Andeottola and Elynn Houston gave Winnacunnet a 50-43 lead. Marelli pounded the glass for two more buckets to give Winnacunnet a 54-46 lead.

“We knew it, everybody in the state knew it, and coaches who (said) that size was going to matter, they were right,” Bike said. “I thought the kids tried to battle and we tried to make it a full-court game, but at the end it came down to the paint.”

“I don’t think there was any panic. We just had to figure out what was going to work best for us, and we were fortunate to come out on top,” McKenna said. “(Andeottola) was a monster. He’s big, athletic and very skilled. He’s made a name for himself and is someone you have to worry about if you’re the opposing coach. “

Dylan Santosuosso came out firing, and the rest of his Bishop Guertin teammates followed his lead in Wednesday night’s Division I boys basketball semifinal against Londonderry High School.

Santosuosso drained five 3-pointers and scored 19 of his game-high 25 points in the first half which left the Cardinals with a 28-15 halftime lead. Bishop Guertin maintained a comfortable cushion the rest of the way in a 55-38 victory at Oyster River High School.
“I was really excited for the guys and we really had a lot of positive energy here during the playoffs,” Bishop Guertin coach John Fisher said. “As the season has gone on, we’ve gotten better and tighter as a team. I’m really proud of them.”
Bishop Guertin (18-4) returns to Oyster River on Saturday night when it takes on Winnacunnet (12-3), which advanced in earlier action with a 61-48 win over Trinity. The Cardinals hadn’t reached the title game since a 50-46 loss to Trinity in 2013.
Santosuosso scored nine points and helped pace the Cardinals to a 12-8 lead through the first quarter, before scoring 11 points in the second.
Londonderry (9-7) trailed 44-27 entering the fourth and could get only within 12 points in the fourth. Mike Rosatoro led the Lancers with 13 points.
“Kudos to BG. They were well prepared and hit shots,” Londonderry coach Nate Stanton said. “It’s tough to come back against a team that is shooting like that.”
A Twitter List by UnionLeader
© Copyright 2021 Union Leader Corp., 100 William Loeb Drive Manchester, NH | Terms of Use | Privacy Policy
Powered by BLOX Content Management System from TownNews.com.
<]