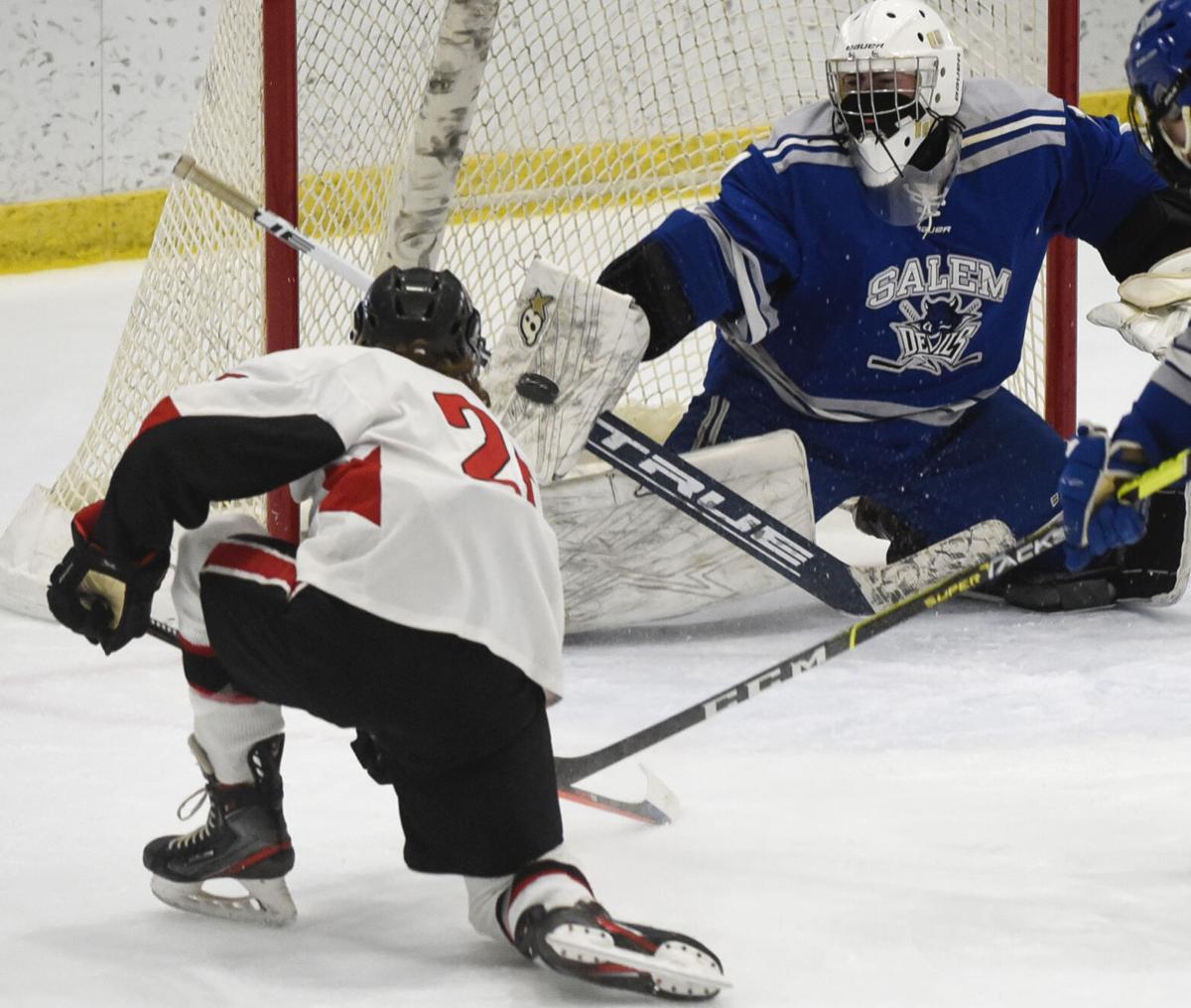 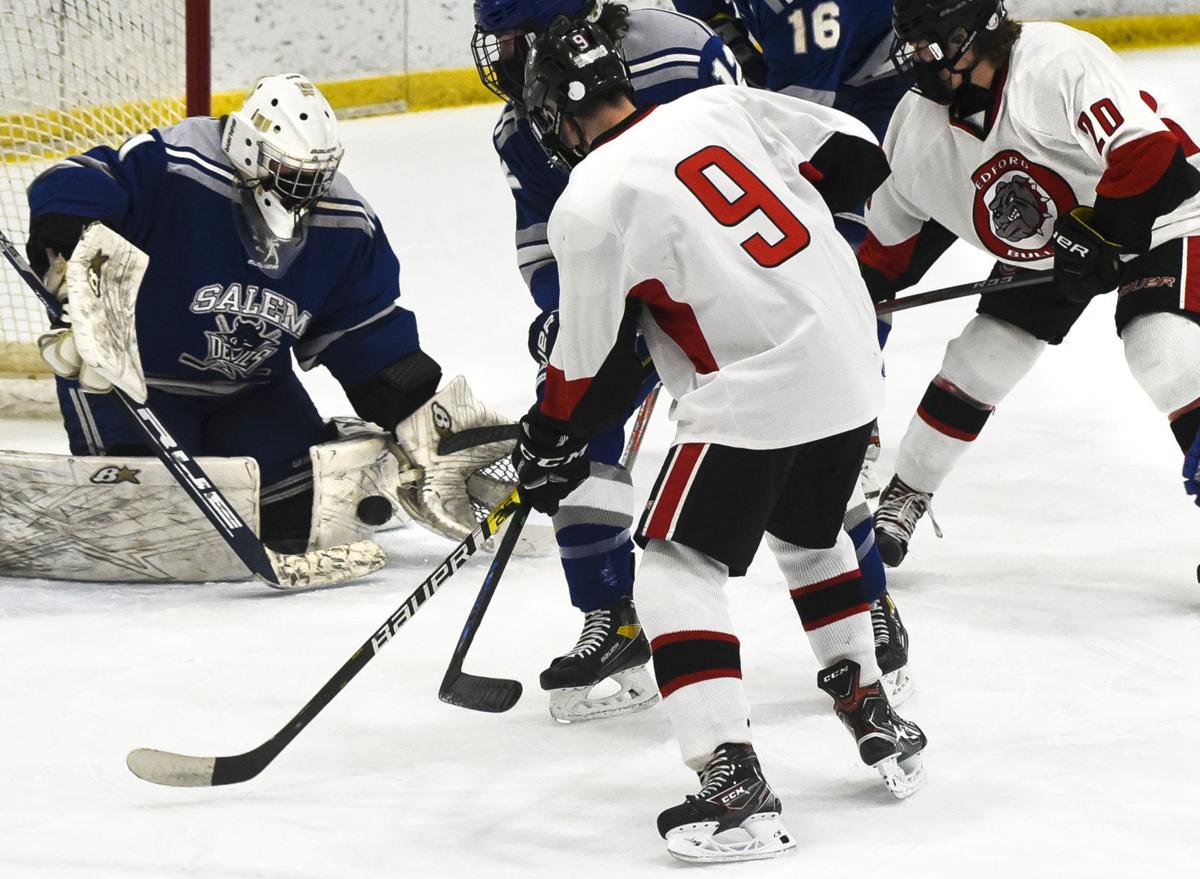 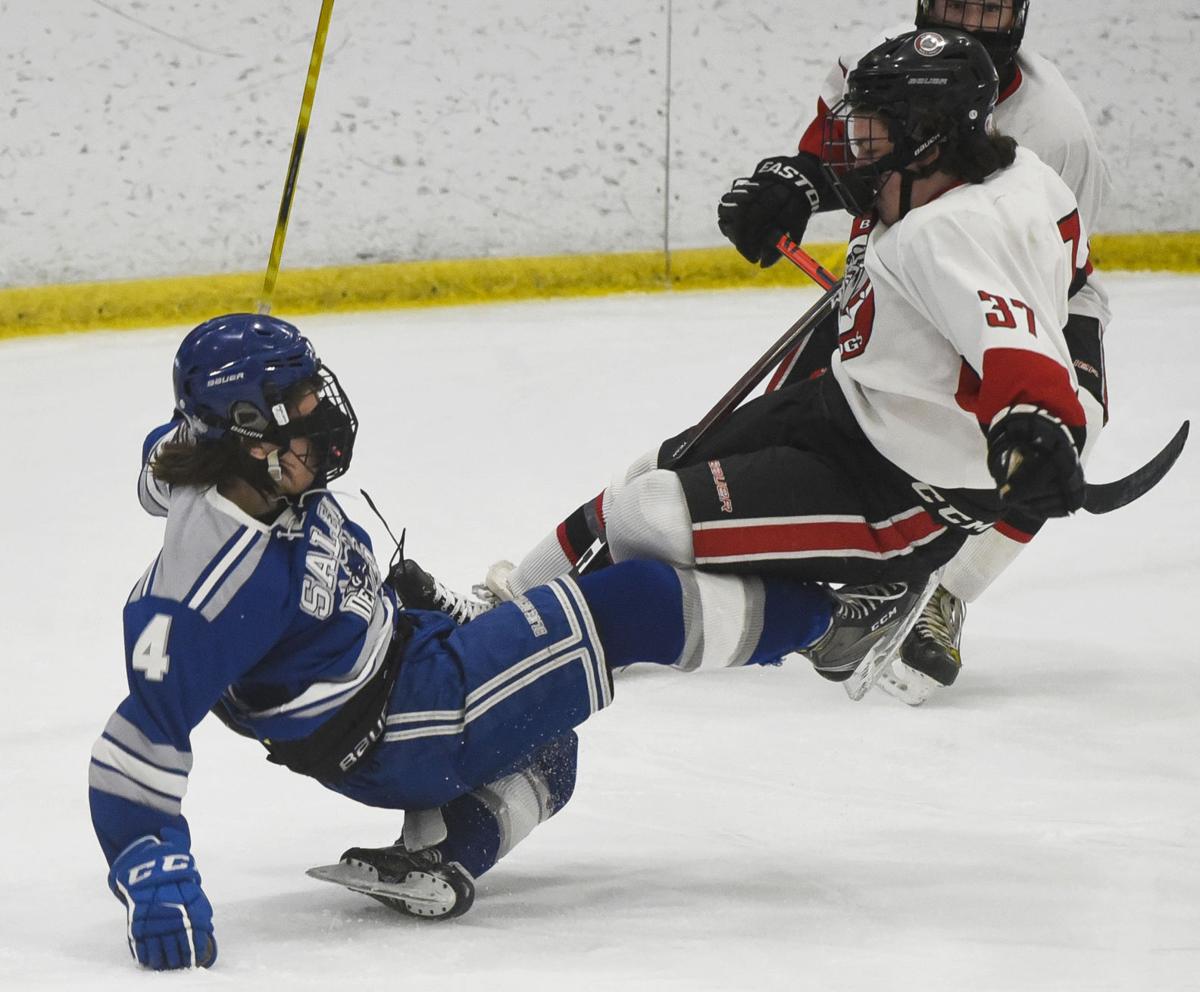 Salem’s Jackson Maietta and Bedford’s Brendan Thornton collide by the net at the JFK Coliseum in Manchester on Wednesday.

Salem’s Jackson Maietta and Bedford’s Brendan Thornton collide by the net at the JFK Coliseum in Manchester on Wednesday.

For Bedford, Pappalardo was a nightmare in the undefeated Blue Devils’ 4-1 Division I road victory over the Bulldogs Wednesday at JFK Coliseum in Manchester.

Pappalardo, who had two goals and two assists, helped Salem build a 2-0 advantage entering the first intermission. He opened the game’s scoring at the 2:14 mark with a counter-rush goal and assisted on classmate Austin Salvetti’s tally from the Bedford blue line that came with 5:46 remaining in the frame.

“He’s got an awesome shot, he’s good down low, he’s good with the puck,” McGinn said of Pappalardo. “You complement him with (linemates Ryan) Allard and (Brady) Ferreira’s skill and energy, it’s a pretty tough line as a whole.”

Perhaps Pappalardo’s most impactful point came 47 seconds after Bedford (5-4) got on the board, when he quelled the Bulldogs’ momentum with a shorthanded breakaway goal to create a 4-1 Blue Devils lead entering the second intermission.

“Shorthanded goals — I don’t care what the score of the game is — it’s just a momentum crusher,” Bedford coach Marty Myers said.

The Bulldogs trimmed Salem’s lead to 3-1 with 2:39 left in the second period, when Ethan Larochelle put home a backdoor goal via assists from Will Scott and Brendan Thornton.

Blue Devils senior goaltender Spencer Deane turned away 12 Bedford shots on goal in the first period on his way to a 35-save performance. The netminder also got help from teammates like Salvetti that blocked a good chunk of Bulldogs shots before they reached him.

“We try to limit shots to the outside as much as we can,” McGinn said. “(Wednesday) we gave up some outside shots and (Bedford) had guys there for quick 1-2 rebound shots. That’s where Spencer really kind of saved us right there.”

Salem went 4-for-4 and notched the shorthanded goal on the penalty kill and 0-for-2 on the power play.

The Blue Devils will host Bedford for a rematch on Saturday at 1 p.m. at the Icenter in Salem.

“Salem is a good club,” Myers said. “They have all the ingredients of a good team — good goaltending, good defense, I think they have a strong offense.

“You don’t like to lose but you know what you’re up against when you play a team like Salem.”