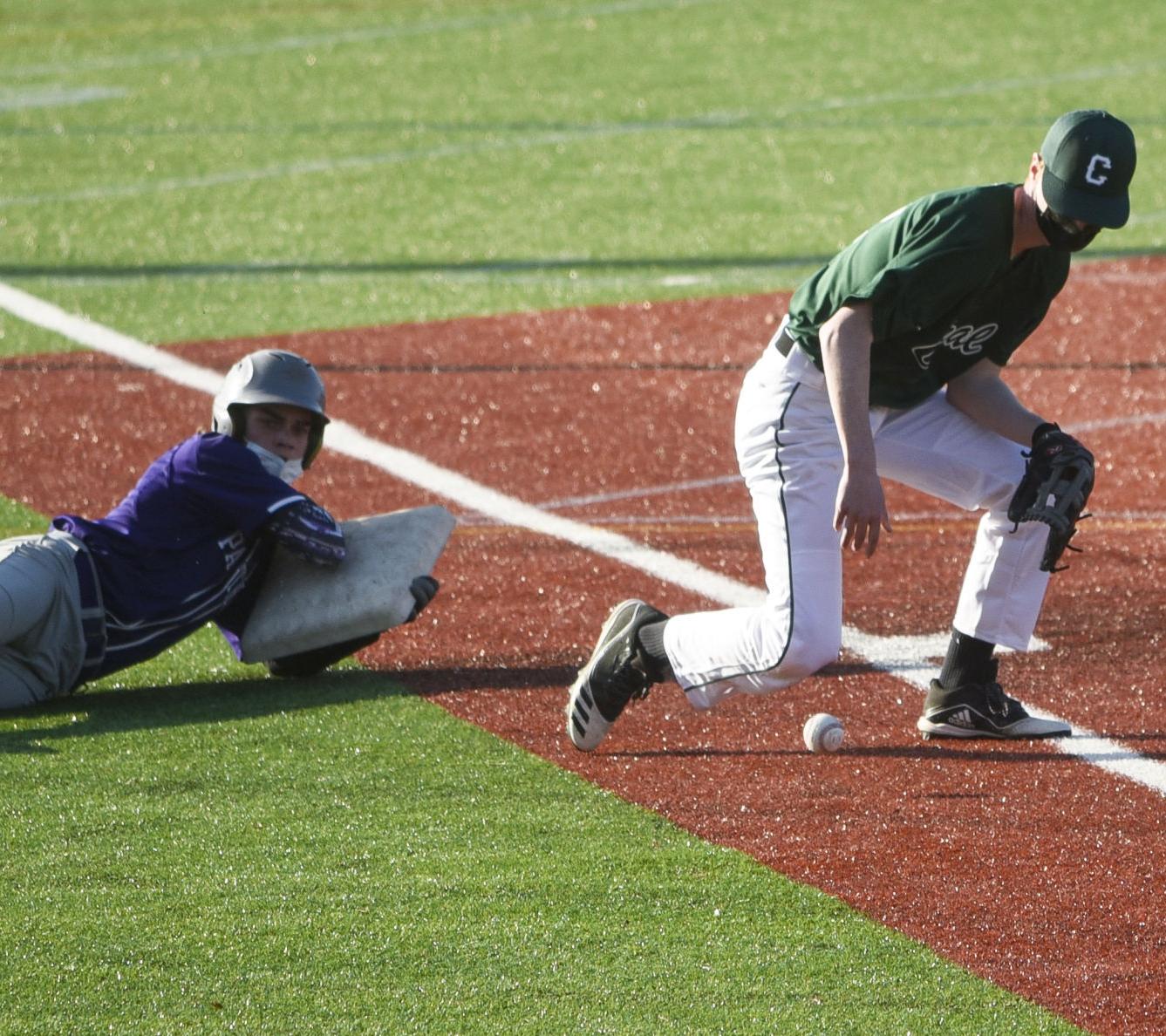 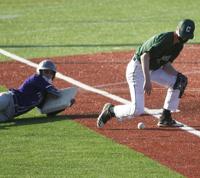 Nashua South’s River Hart holds the third base bag after he was safe and the bag came loose during Wednesday’s game against against Manchester Central at Gill Stadium. The Central third baseman is Tyler Chraboloski. South won the game, 7-2. 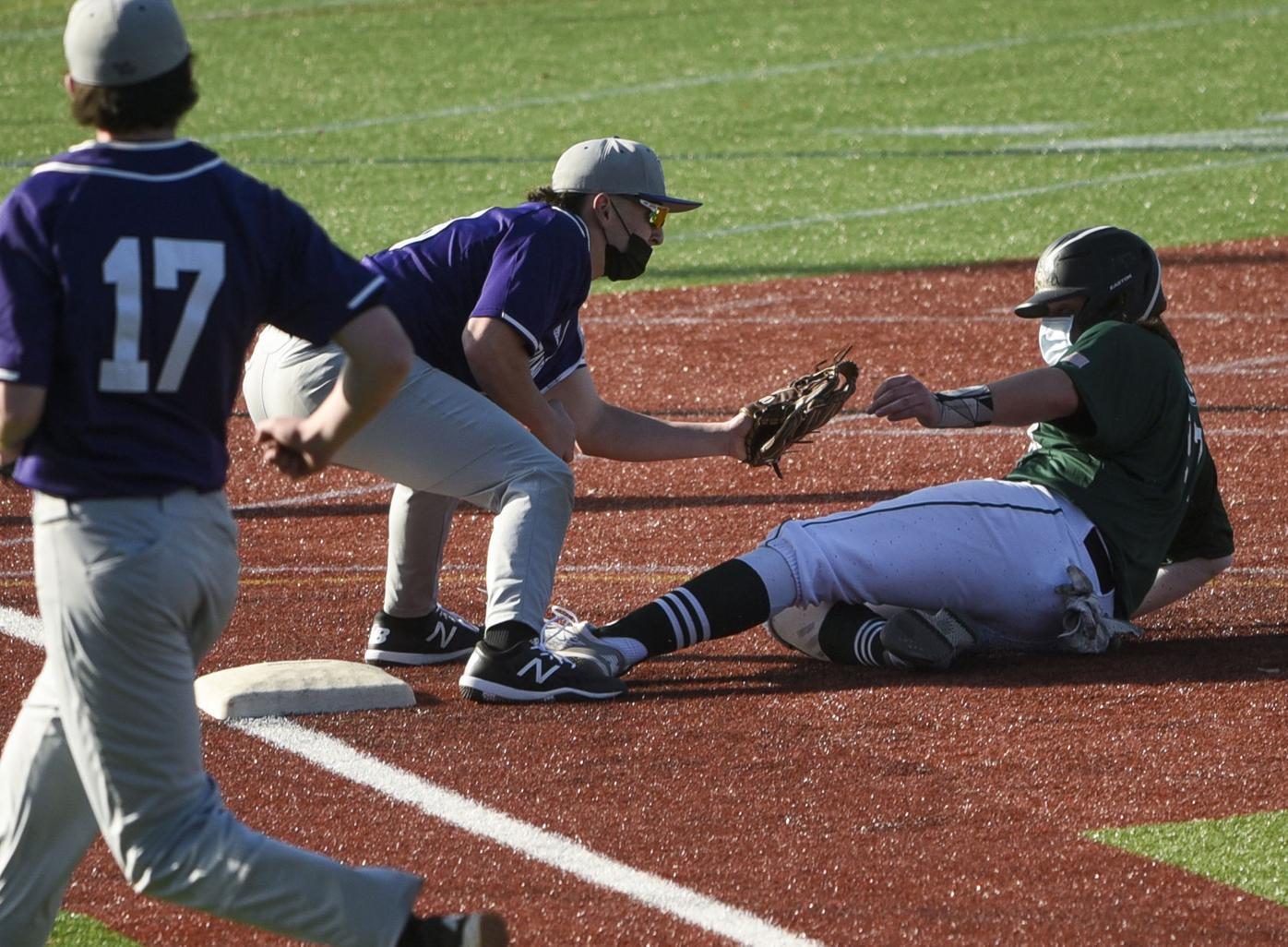 Nashua South’s Jake O’Connor gets the tag on Central’s Declan Ryan in the fourth inning at Gill Stadium in Manchester on Wednesday.

Nashua South’s River Hart holds the third base bag after he was safe and the bag came loose during Wednesday’s game against against Manchester Central at Gill Stadium. The Central third baseman is Tyler Chraboloski. South won the game, 7-2.

Nashua South’s Jake O’Connor gets the tag on Central’s Declan Ryan in the fourth inning at Gill Stadium in Manchester on Wednesday.

Starter Justin Maheu pitched 4 1/3 scoreless innings and the Windham High baseball team hung on for a 4-3 victory over Portsmouth on Wednesday.

Joey Blair notched the final two outs to get the save after Portsmouth had scored three runs in the seventh.

Cole Constantine and Westin Lippold had RBIs in a three-run fifth inning for the Jaguars. John Haga had two hits for Windham.

Salem 7, Spaulding 3: Tom Dion pitched 4 1/3 innings of six-hit relief to earn the win. He allowed one run. Tom Ahlers (double) and Damon Gigante collected two hits each for the winners.

Trinity 9, Pelham 2 (Tues.): Tate Flint scored four goals and added an assist for the Pioneers. Ethan Flannagan scored a goal and had three assists. Andrew Overy had two goals and two assists, and Brady Watts notched a goal and an assist along with going 12-for-12 at the faceoff dot. Also scoring was Austin Pepin.

Bishop Guertin 17, Londonderry 4 (Tues.): Caroline Leone and Tara Wright scored two goals each for the Lancers in their opener.

Pelham 14, Manchester West 1 (5 inn.): In Manchester, Shaelyn Hinton had two hits, including a triple, and drove in three runs, Skyy Ortega and Rylie Beisang each notched two hits and an RBI, and Molly Sauer went all five innings, fanning six and allowing five hits for Pelham (1-0) in Division II play. For West (0-1), Erin Murphy had three hits, including a double, and an RBI, and Olivia Page-Howe had a hit and scored a run.

Central 6, Nashua South 4: Tori Walker and Lizzie Derusha each picked up RBIs and Rania Barton had an RBI triple for the Little Green. Abigail Heath and Chloe Gilroy also drove in runs for Central. Heath and Barton each finished with two hits, and Barton went the distance on the mound, allowing four hits and fanning 15. Jill Daley took the loss for Nashua South. She also had two hits.

Berlin 12, Laconia 11: Summer Laflamme had a grand slam for Laconia.

Laconia 9, Berlin 7 (Tues.): Madison Darling earned the victory on the mound and Mekhia Burton, Summer Laflamme and Ashlynn Baron starred at the plate.

Windham 19, Nashua North 0: (Tues., 5 innings): Ella Tower dominated in the circle, allowing one hit in four innings and striking out nine. The Jaguars were led at the plate by Larissa Peissens 4-for-4 (two singles, two doubles) and Tower (two singles and a double).

Hanover highlights: In a Tuesday meet, Pierce Seigne starred in the 1600-meter run with a time of 4:43.34 and Ian Solberg with a jump of six feet in the high jump. The Hanover girls got a victory in the 100 meters from Ella MacLean, returning from injury, in a time of 13.12 seconds.