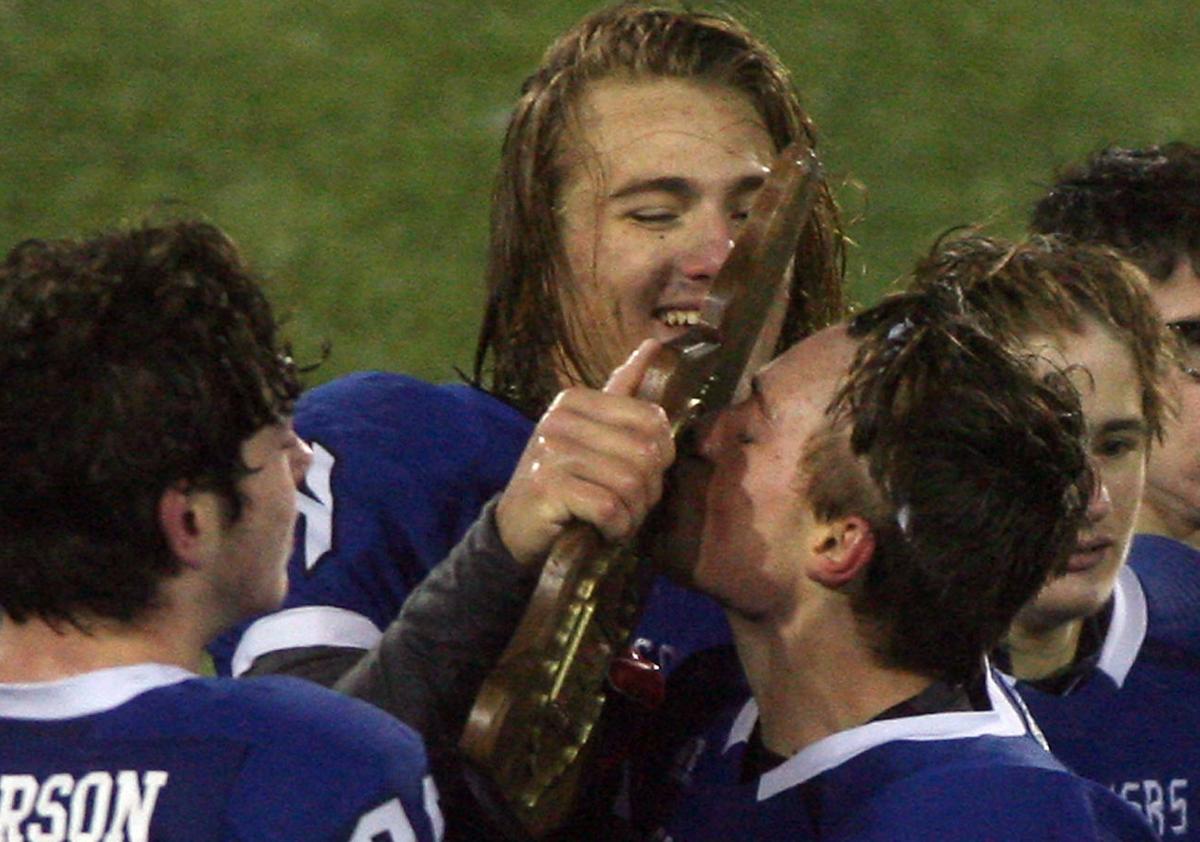 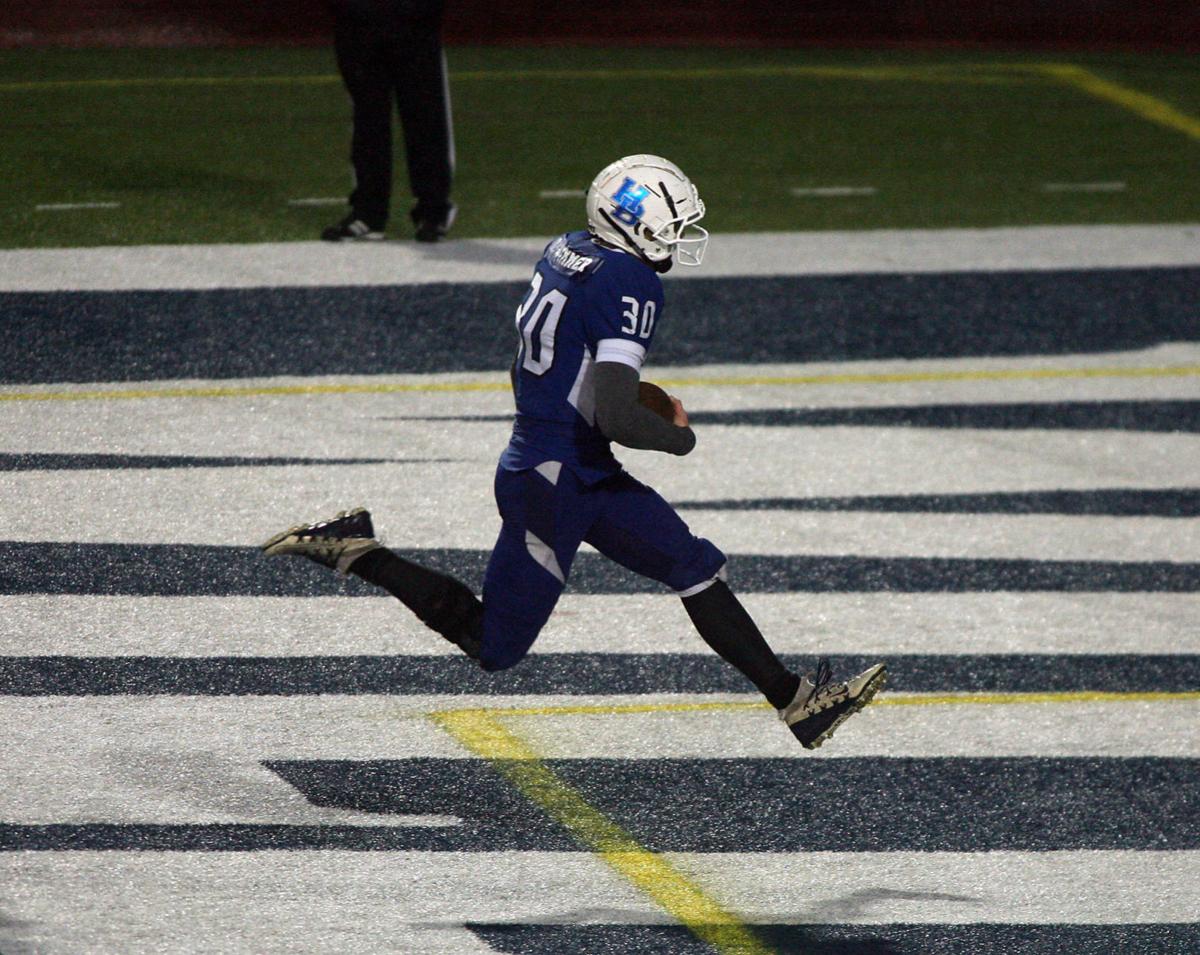 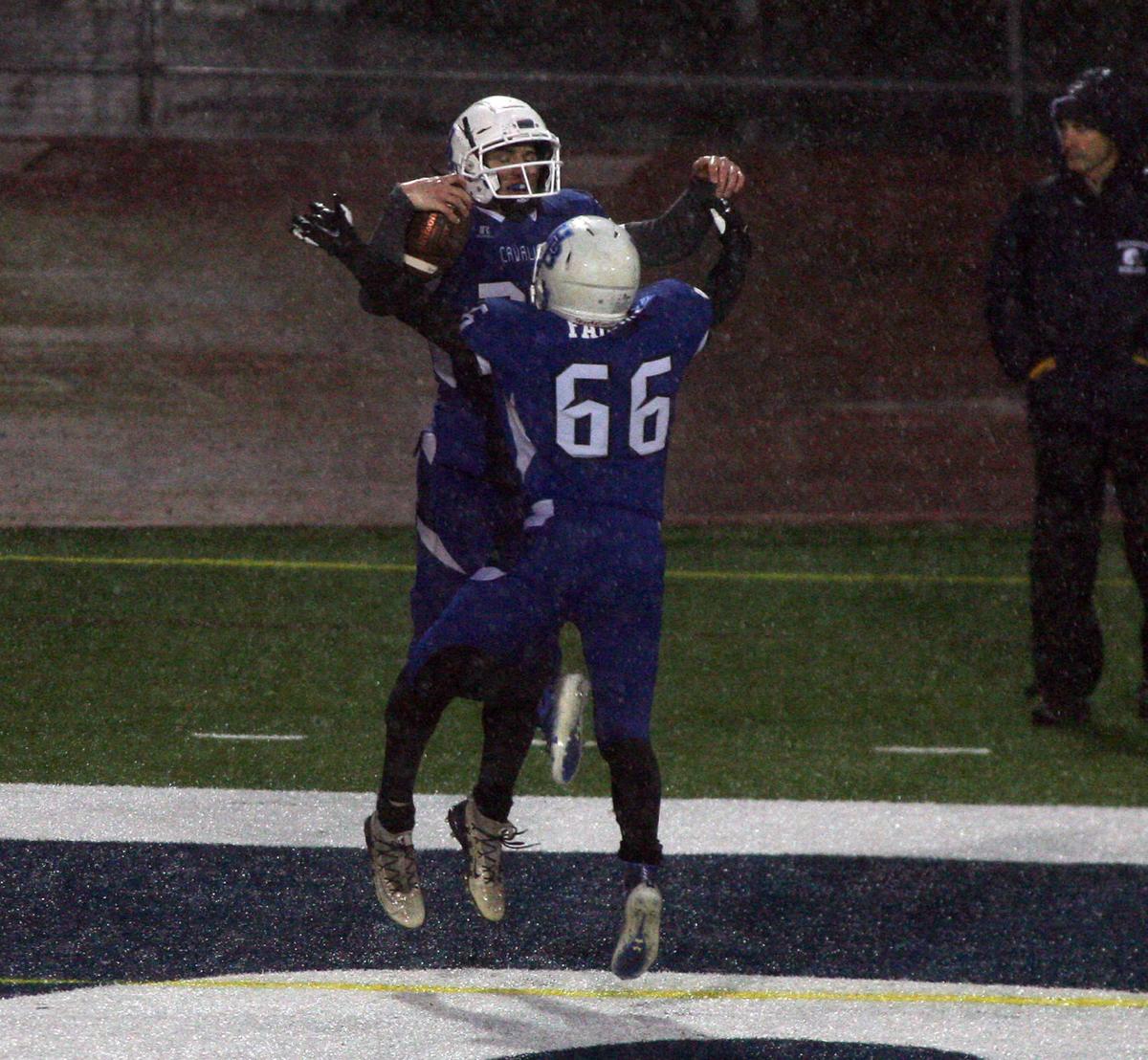 DURHAM — Hollis/Brookline’s Wimmer twins have been known to light up teams on offense, usually with quarterback Sander finding running back Quinten in a hail of passes. But the windy and wet conditions at the University of New Hampshire’s Wildcat Stadium on Sunday kept the ball on the ground.

Serving as one part of a two-headed monster in the Cavaliers’ backfield, Quinten rushed 18 times for 144 yards and three touchdowns, showing off the versatility his size and athletic ability afford him to help No. 2 Hollis-Brookline clinch its first-ever title with a 24-13 win over Plymouth in the NHIAA Division II football championship game.

It was a familiar face in an unfamiliar role that resulted in the title victory.

Typically, one of the top wide receivers in the state, Quinten only caught one pass for 3 yards from his brother on the only passing play the Cavaliers ran all game.

“We prepared for this weather and we kind of saw it coming over the last week,” Cavaliers coach Chris Lones said. “We can run the ball. We’ve been running the ball well the last five weeks, but nobody talks about our run game because we throw the ball so well.

“We were averaging 135 yards a game rushing and we had three weeks where we rushed for almost 200 yards. We knew we could run the football and we just decided if the weather was going to be really bad we were going to have our three best kids with the ball in the backfield.”

Joining Quinten Wimmer in the backfield was Marc-Andre Thermitus, who ran 20 times for 167 yards, including a 62-yard gain at the end of the third quarter that brought Hollis-Brookline from its own 20-yard line to the Plymouth 18. Four plays later, Quinten Wimmer scored for the third time on an 8-yard rush. Sander Wimmer added the two-point conversion on a keeper to go ahead 24-7.

That scoring drive was preceded by a Plymouth drive that lasted seven minutes, 42 seconds over 12 plays but only netted 45 yards. It was a discouraging drive that resulted in a turnover on downs and the Bobcats trailing 16-7.

“That was (tough) for us,” Plymouth coach Chris Sanborn said. “(The rain) swamped the whole field and we had a couple of mistakes during that drive that if we hadn’t done it might’ve been different.”

Plymouth opened up the scoring when Joseph D’Ambruoso capped off a six-play, 63-yard drive with a 7-yard rush to the left. Bobcats quarterback Cody Bannon rushed four times and picked up 51 yards to help set up that score, ultimately finishing the game with 148 yards on 22 carries, including a long of 29. He also had a touchdown pass to Cale Swanson.

Quinten Wimmer scored on a 9-yard run with 1:20 left in the first half, and after Sander Wimmer ran in the two-point conversion, Hollis-Brookline took an 8-7 lead into the halftime break.

The Cavaliers possessed the ball first in the second half and made it count, as Quinten Wimmer scored his second touchdown, this time a 7-yard run, to go up 16-7.

“We stopped them and then scored again on our next drive. We made them do something they don’t do, which is play in catch-up mode. They’re trying to run hurry up and trying to throw the ball. It didn’t work.”

For the Wimmer twins it was a great way to end their high school football careers. The pair will head to California next year to play Division III football.

“Every year when I was playing I felt like we should’ve won the championship,” Quinten Wimmer said. “Finally, to actually do it my senior year, it’s surreal. All credit to my teammates and coaches.”