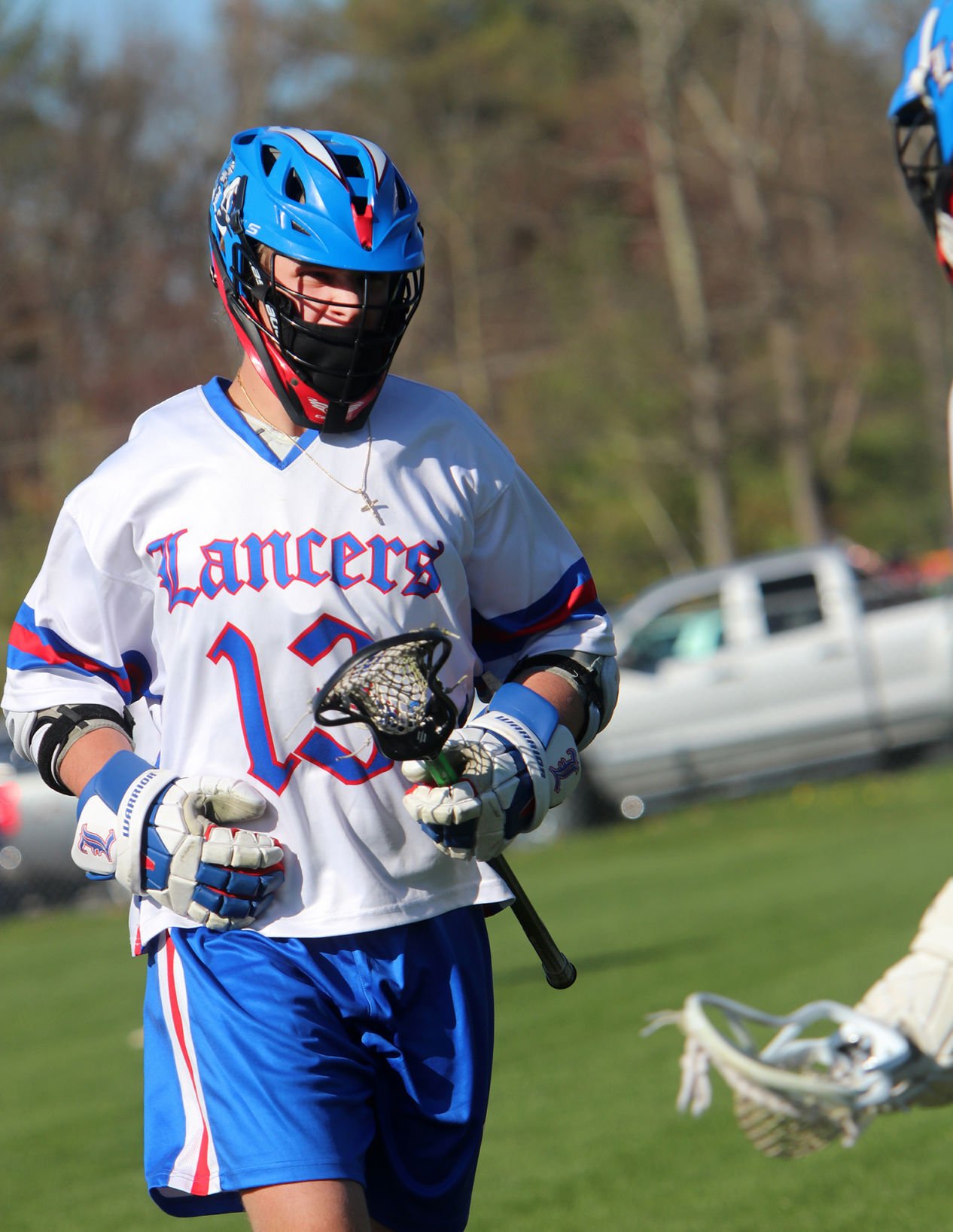 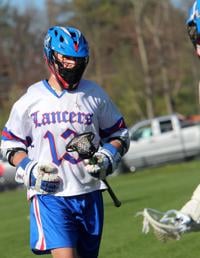 Londonderry Alexander Gruchot watches the action on Tuesday against Concord. 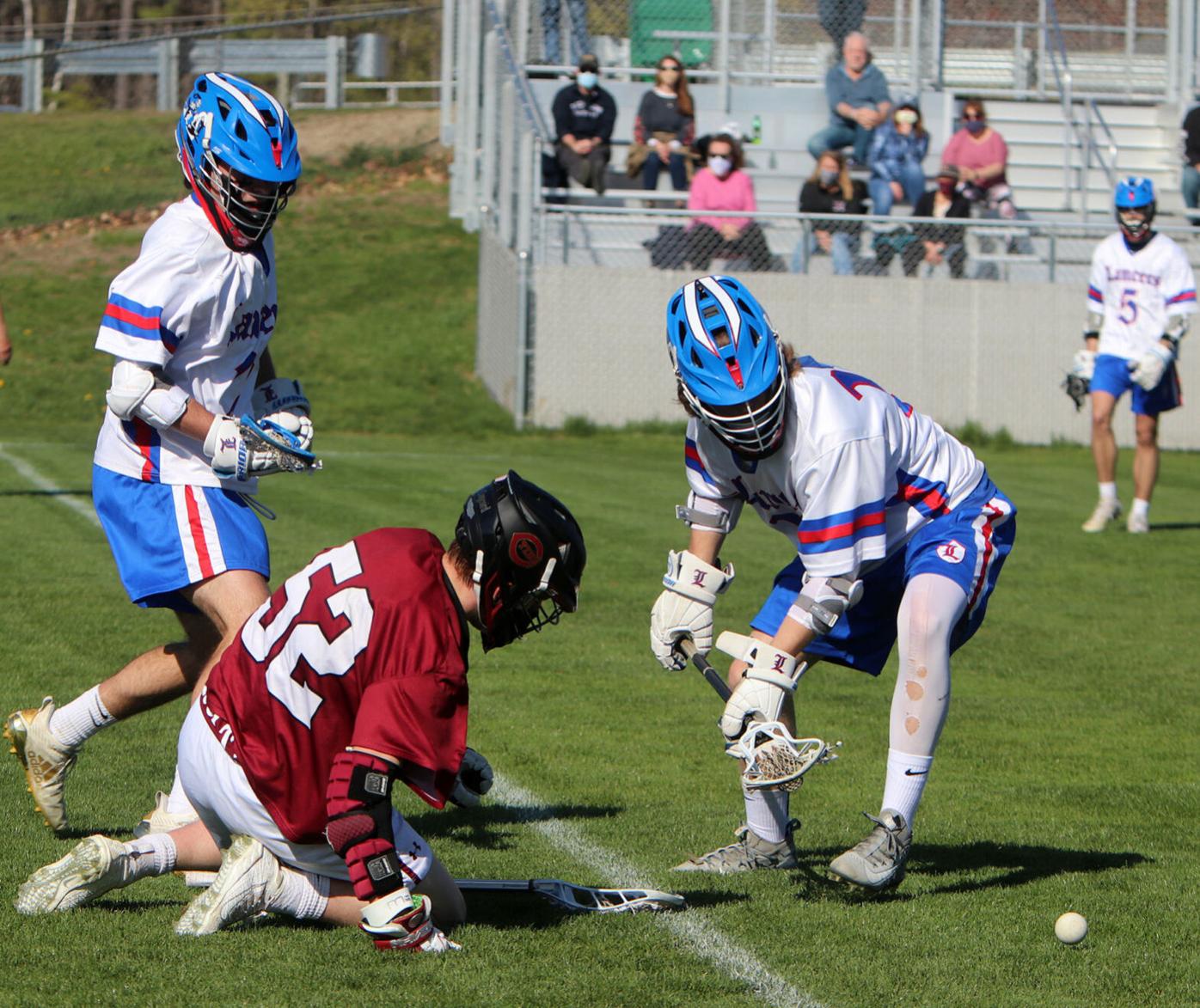 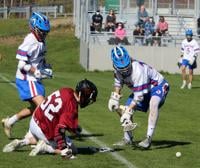 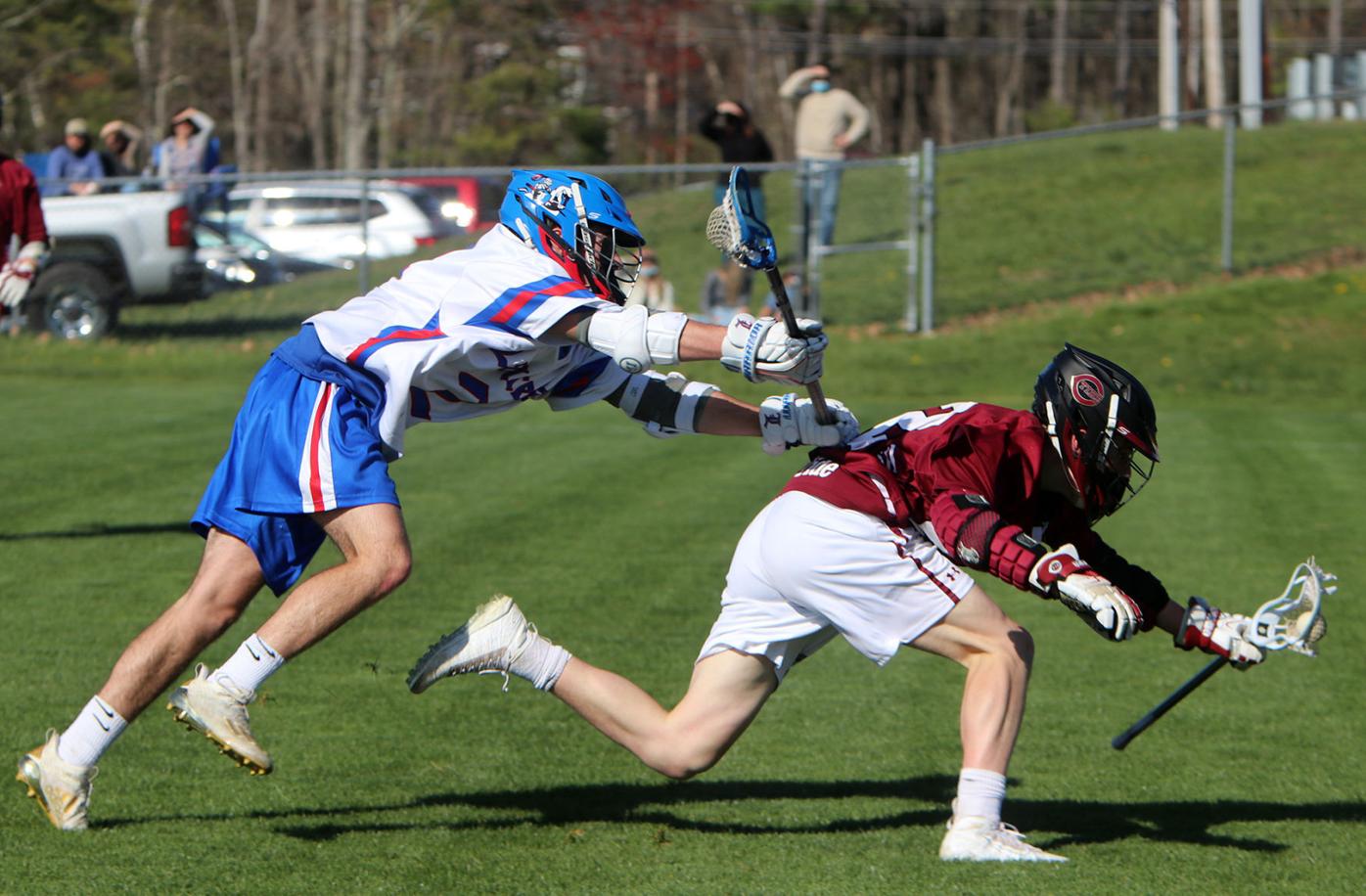 Londonderry’s Zachary Fawcett, left, hits Concord’s Brody McGonigle while trying to dislodge the ball during their game at Lancer Park on Tuesday. 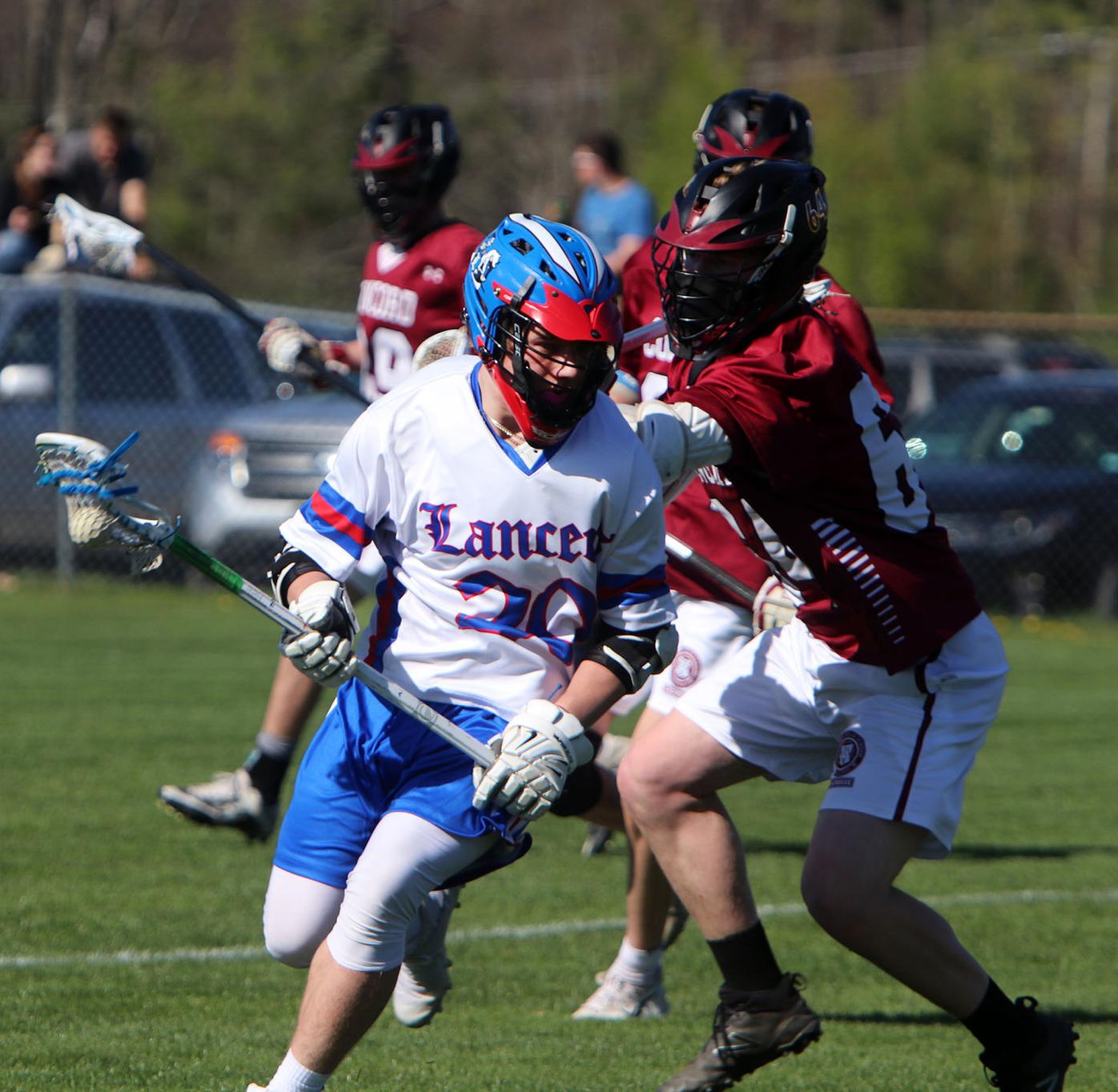 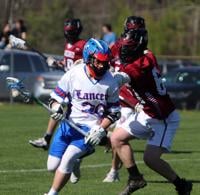 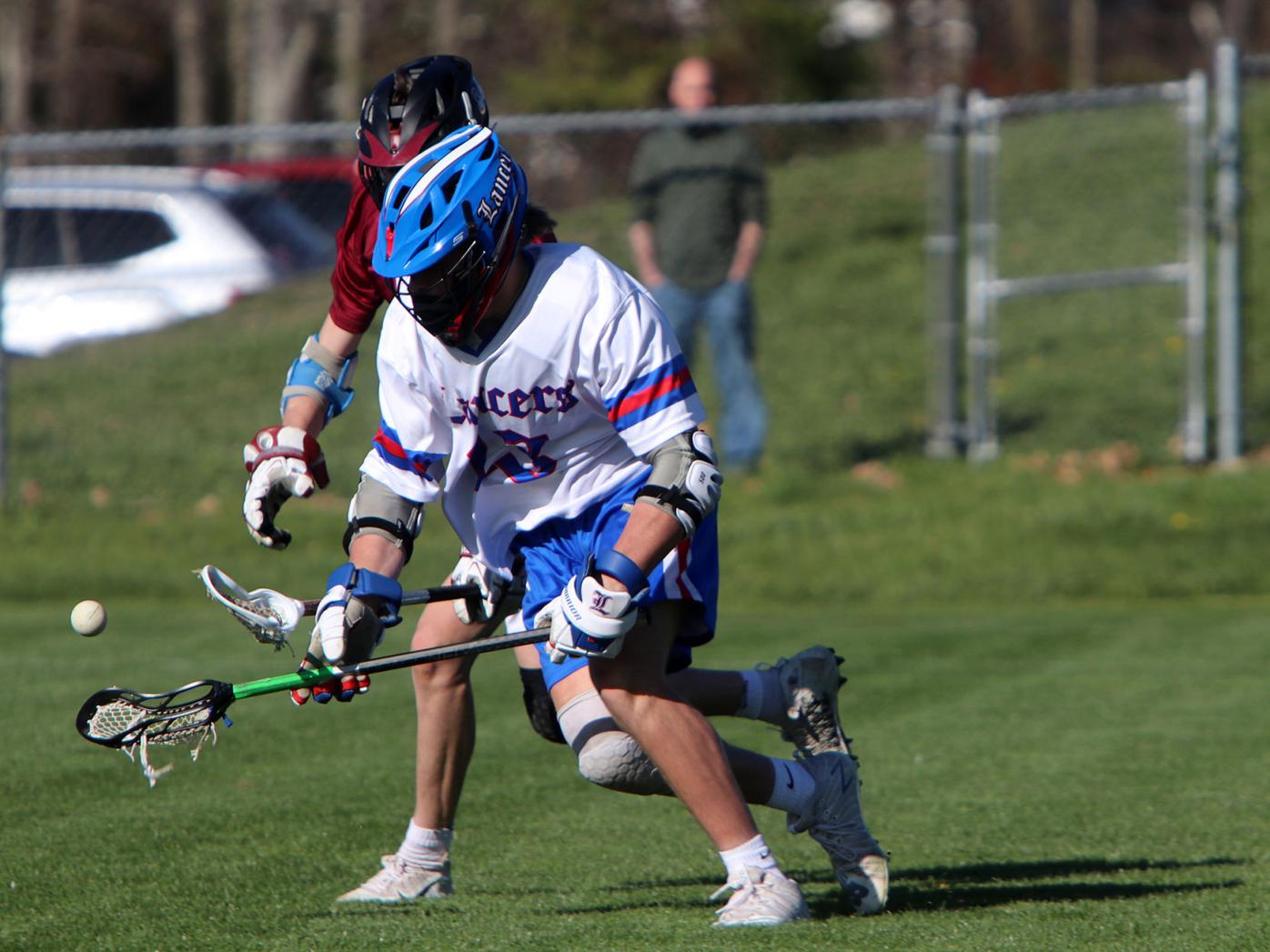 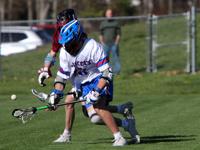 Alexander Gruchot of Londonderry is shown in action during Tuesday's game against Concord.

Londonderry Alexander Gruchot watches the action on Tuesday against Concord.

Londonderry’s Zachary Fawcett, left, hits Concord’s Brody McGonigle while trying to dislodge the ball during their game at Lancer Park on Tuesday.

Alexander Gruchot of Londonderry is shown in action during Tuesday's game against Concord.

LONDONDERRY — An injury forced Alex Gruchot to become a faceoff specialist. Now, it’s all working out for him.

Gruchot, a Londonderry High senior, won 15 of 17 faceoffs in the Lancers’ 16-6 Division I victory over Concord on Tuesday at Lancer Park. He transitioned to faceoff specialist from midfielder his freshman season after recovering from a broken femur, which he suffered at the end of seventh grade. The injury kept him out of sports for 19 months.

“It’s just honestly been a lot of fun for me,” Gruchot said of the switch. “I played a little bit beforehand before I had that injury and I just kind of enjoyed it. When I started getting back in, it was kind of nice for me because it was one small thing that I could focus on myself and I could also focus on that at home so I was able to just kind of work my way up and it kind of just fell into the place. When they needed a guy to fill the position freshman year, I was there.”

Gruchot lost two faceoffs in the first half, both via violation.

“Kind of reacting to what the other guy was doing was helping me win the ball, whether I go forward, backward, out to the side kind of thing — just kind of taking what he was doing and then reacting my way to how he’s playing me,” Gruchot said of his faceoff success against Concord.

Lancers coach Roger Sampson said Gruchot has been great on faceoffs all year and come a long way since his freshman campaign.

“I’m proud of him,” Sampson said. “He’s been behind the 8-ball because of that leg injury years ago. ... This is the one niche we could find for him and he’s worked hard at it religiously and the results speak for themselves.”

Sampson said Grutchot also won a good percentage of faceoffs in the team’s 21-8 loss at Exeter last Saturday but Londonderry (3-2) did not capitalize on them. That was not the case against the Crimson Tide (2-2) on Tuesday.

The Lancers broke the game’s only tie, 1-1, on a goal from Cole Duarte 3:59 into the first quarter and led, 5-2, going into the second frame.

Londonderry had a 9-3 halftime advantage and built a 12-4 lead after three quarters.

Sampson used his first timeout in the first quarter to tell his attackmen to change their approach. The Lancers ended the frame on a 3-1 run following the timeout.

“I wanted them to really start moving the ball around hot and maintain some possession time,” Sampson said. “You’re not going to beat the powerhouses in the division if you can’t possess the ball in the zone, come away with the goal and limit their time. ... (Tuesday) was a great effort controlling the ball in the zone and being smart with the ball.”

In his first varsity start, sophomore Dane Duarte made eight saves for the Lancers.

Concord received a hat trick from Sam Nichol and a goal each from Nate Doherty, Brody McGonigle and Danny O’Brien. Colby Bettens made 12 saves and Zan Alberici won five faceoffs for the Crimson Tide.

“We needed to control our offense, we needed to move the ball around, we needed to solidify our defense, which was somewhat of a mess against Exeter,” Sampson said. “We were able to put it all together (Tuesday) and this was a good win for us because we really needed that confidence boost.”