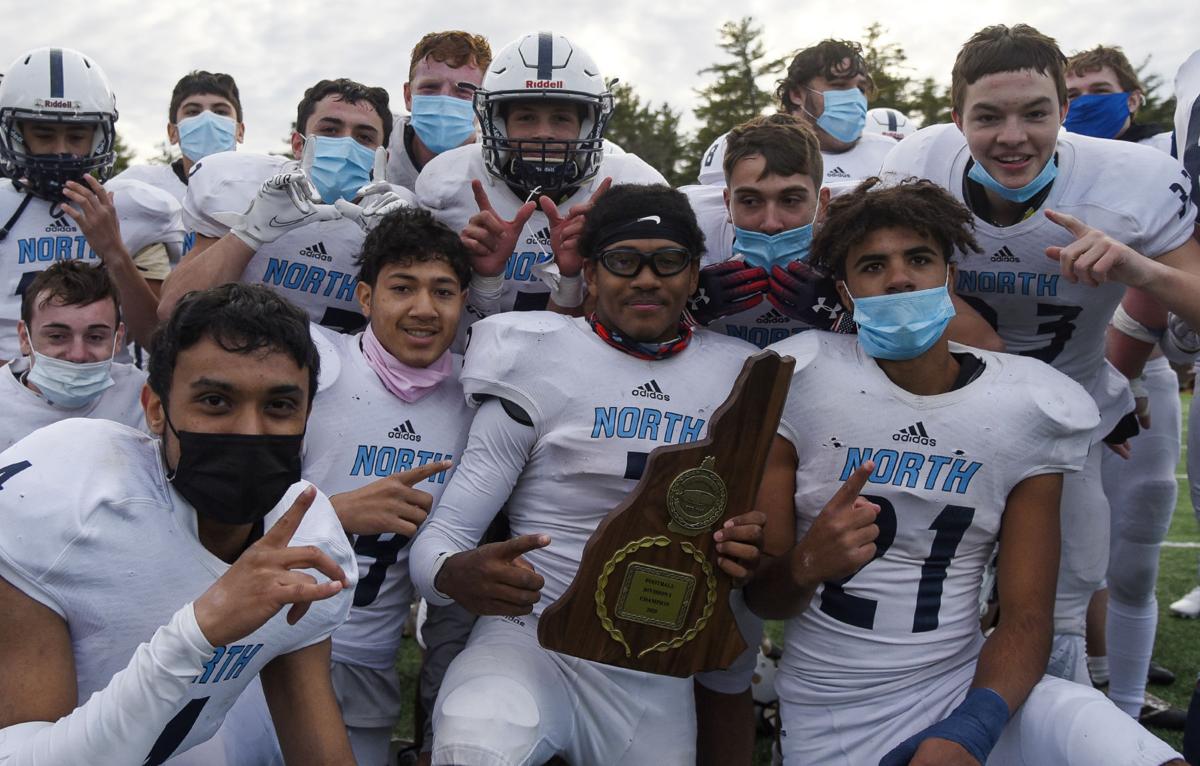 Nashua North quarterback Curtis Harris-Lopez, flanked by teammates, holds the championship plaque after the Titans beat Goffstown in the Division I final on Nov. 21 at Bedford High.

Ascending to the top spot in the Union Leader Power Poll is no easy task. Finishing there can be even tougher.

Nashua North accomplished both in a wire-to-wire effort this season. The Titans were the No. 1 team when this year’s first Power Poll was released on Sept. 25, and ended the season in that position as well thanks to an unbeaten season (7-0) capped by Saturday’s 49-21 triumph over Goffstown in Saturday’s Division I championship game.

North collected each of the six first-place votes in the final poll, which was released today. Goffstown ended the season with an 8-1 record and edged out Salem for the No. 2 spot in the season-ending poll. Salem lost to North 33-28 in the Division I semifinals.

“I’ll tell you it’s better to end No. 1 than it is to start No. 1,” North coach Dante Laurendi said. “The kids lived up to it. The same thing with Goffstown. They were ranked high all year and we ended up being the teams people talked about.

“It’s not easy to win when you’re expected to. I think both sets of teams did that. Our kids played great (Saturday) and deserve all the credit.”

Saturday’s victory handed North its first state championship. The Titans were the Division I runner-up in 2009 and 2010.

This was the 10th consecutive season the No. 1 and No. 2 teams in the Power Poll met in the Division I championship game. The top teams have faced each other for the Division I title in all but two years since the poll began in 2008.

“I think we’ll look back and see that we had phenomenal senior leadership,” Souhegan coach Robin Bowkett said. “We had phenomenal players and a bunch of guys who understood their role and how their role complemented our team. Just a resilient group that had this goal (winning a championship) for a long time.”

Bishop Guertin, which went unbeaten en route to the Division II championship in 2009, is the only non-Division I team to finish No. 1 in the poll.

North faced an additional challenge in its bid to finish No. 1 this season. COVID-19 caused four playoff games to be canceled and brought a premature end to the postseason for St. Thomas, Exeter, Lebanon and Winnisquam. Lebanon would have entered its Division II semifinal against Plymouth unbeaten.

“Our coaches and our players did a great job navigating through this,” Laurendi said. “We survived.”