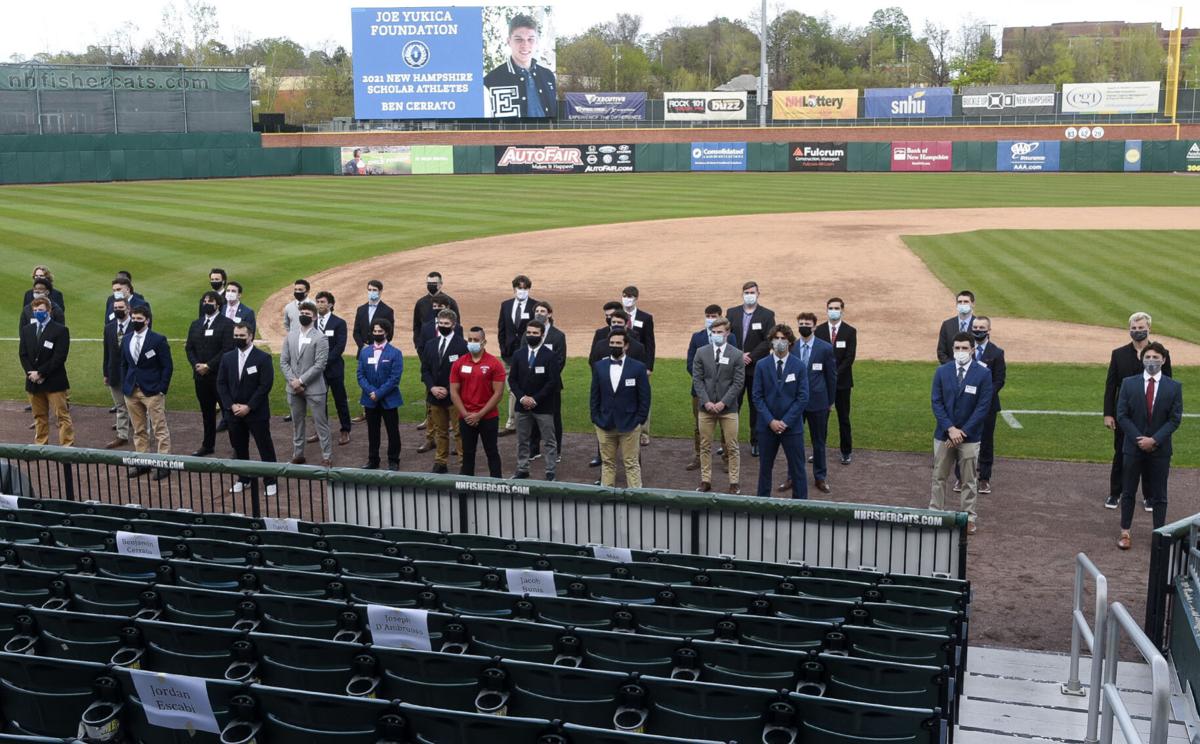 Award recipients, below, line up for a photo during the annual Joe Yukica NH Chapter National Football Foundation & College Hall of Fame Scholar-Athlete Awards at Delta Dental Stadium in Manchester on Tuesday. At right, the players’ trophies are displayed. 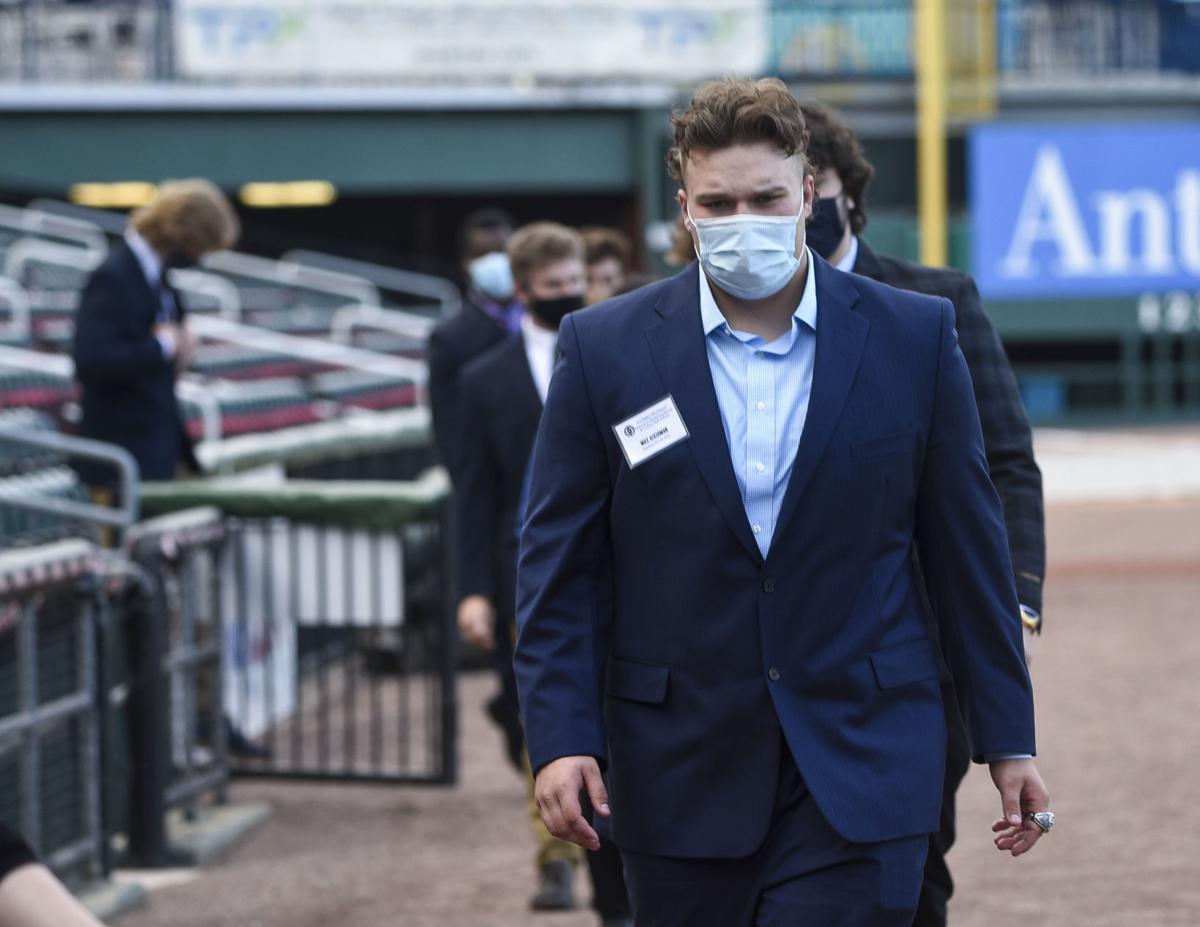 In near photo at left, Nashua North’s Max Ackerman leads a line of players receiving their awards during Tuesday’s celebration at the stadium. 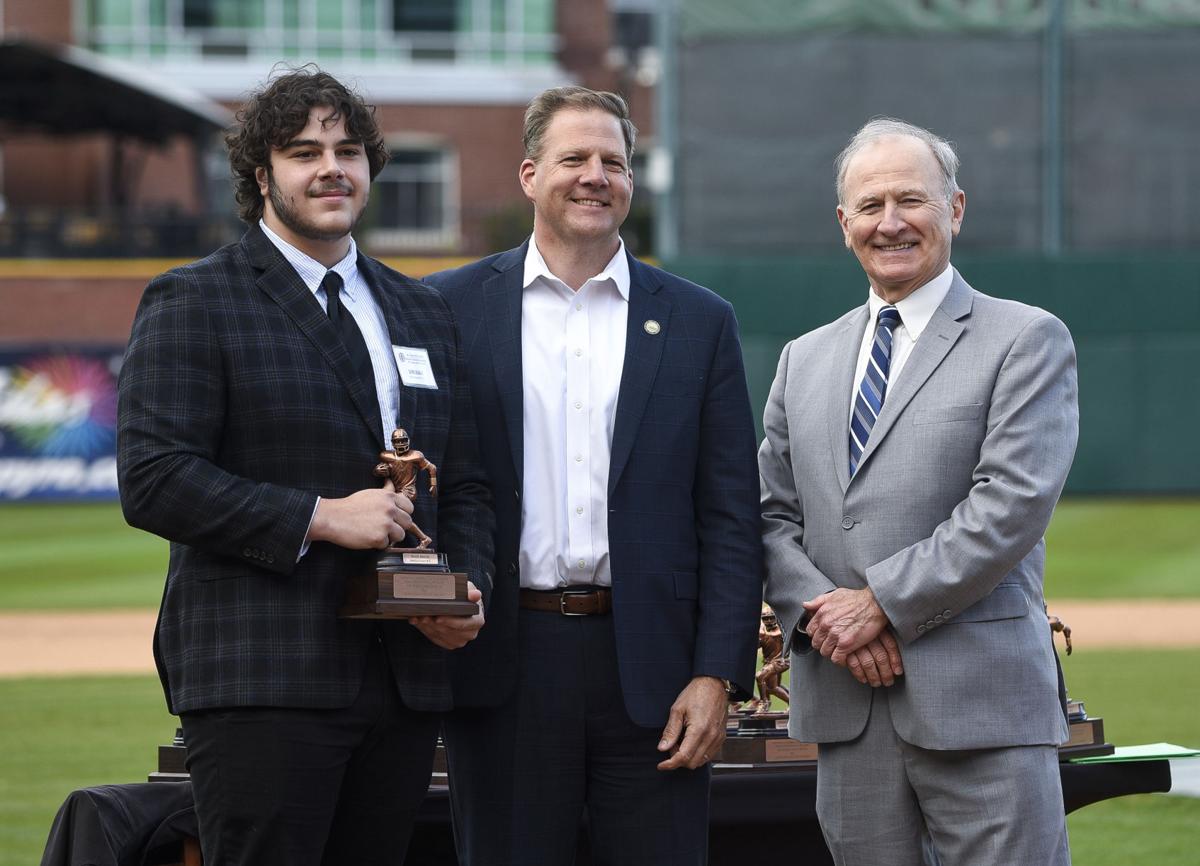 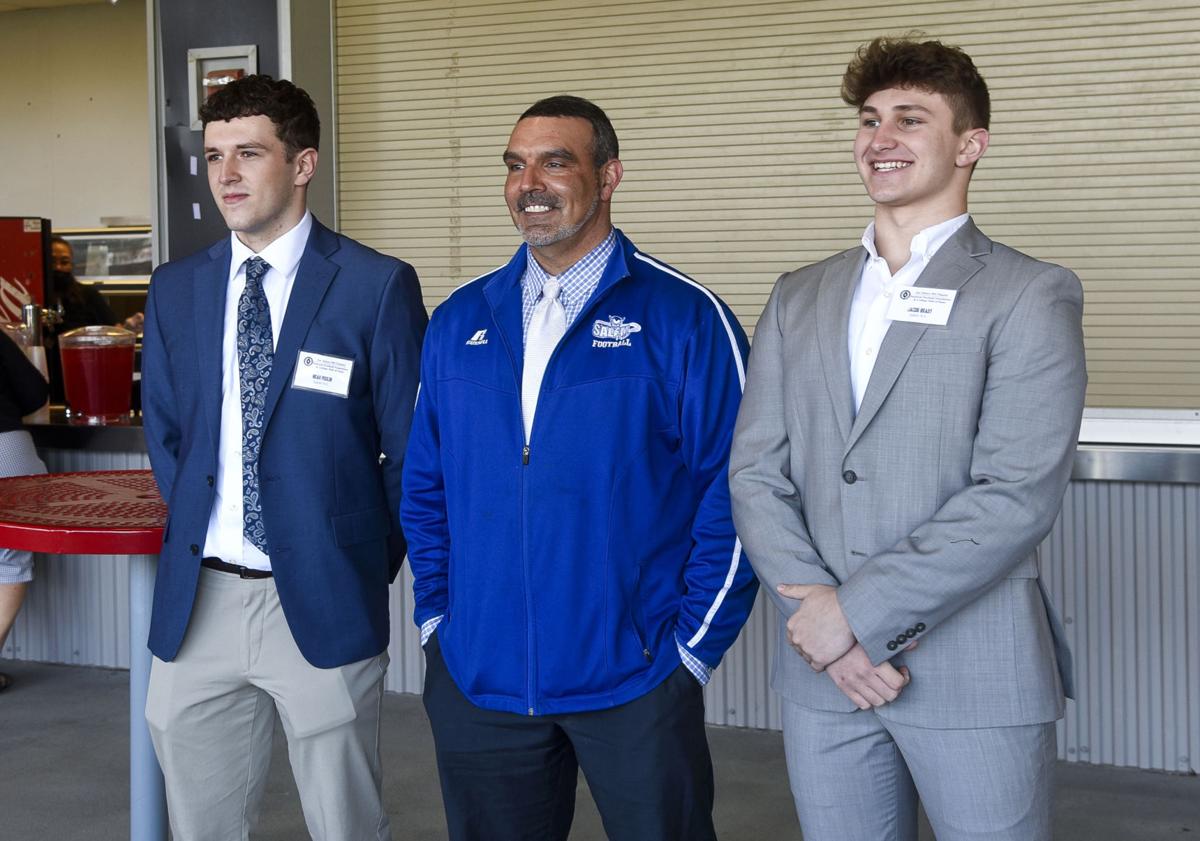 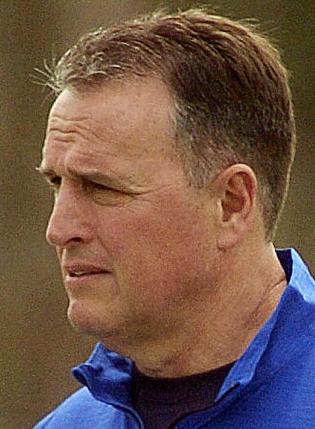 Award recipients, below, line up for a photo during the annual Joe Yukica NH Chapter National Football Foundation & College Hall of Fame Scholar-Athlete Awards at Delta Dental Stadium in Manchester on Tuesday. At right, the players’ trophies are displayed.

In near photo at left, Nashua North’s Max Ackerman leads a line of players receiving their awards during Tuesday’s celebration at the stadium.

Former Brown University head coach Phil Estes was among those honored by The Joe Yukica Chapter of the National Football Foundation and College Hall of Fame on Tuesday night during the organization’s scholar/athlete banquet at Delta Dental Stadium.

Estes, who played at Laconia High School and the University of New Hampshire before he embarked on a coaching career, was given the Andy Mooradian Award for outstanding contributions to football. UNH head coach Sean McDonnell accepted the award for Estes, who could not attend the banquet because of a death in his family.

“This means the world to me, because everything for me started here in New Hampshire with great coaches, great mentors,” Estes said Monday. “I didn’t know a thing about football when I signed up in junior high. I didn’t even know what position to put down. My brother told me I was a lineman, so I put down guard. But I had an awesome experience in football and that was with (former Laconia High School football coach) Jimmy Fitzgerald and Paul Phelps, who was my mentor as a line coach and was like another father to me. Those two guys mean the world to me and they’re the reason I got into coaching for sure.

Estes, a member of the Laconia High School Hall of Fame, was an assistant coach at Concord High School for two years and then coached the offensive line and served as offensive coordinator at UNH from 1984 to 1993. He worked under his former college head coach, Bill Bowes, during his time as an assistant at UNH.

“My whole philosophy of coaching comes from Coach Bowes and I know Sean (McDonnell) does the same,” Estes said. “Coach Bowes taught me everything about organization and trust, and about loyalty and hard work. It isn’t always about talent, it’s about how hard you work. We were always tough, blue-collar teams back then.”

Estes was part of a group called Fitzy’s Super Sachems that helped raise money for the turf field that was installed at Laconia High School. The field is named after Fitzgerald, his former high school coach.

“When Brown played Dartmouth, he used to come here and practice at our facilities,” Laconia football coach Craig Kozens said. “That’s how I got to know him. Whenever he’s been asked to do something for the school or our program he’s always been generous and willing to help out.”

Estes, who lives in Wolfeboro, was an assistant coach for Kingswood Regional last season.

“His level of football IQ is just off the charts,” Kingswood coach Paul Landry said. “He taught all of us — coaches and players. He gives back at all levels and he’s certainly been an asset to football in our community. Football is better in our state because of him. That’s a fact.”

The Yukica Chapter recognized 40 scholar/athletes at the banquet. This year’s recipients were selected based on their athletic and academic achievements, plus their contributions to their community.

Former Manchester West and Trinity football coach Dick Powers was also recognized at the event. Powers, who died in 2018, was a three-sport athlete at Bishop Bradley High School (now Trinity), and went on to play football at Boston College. He also spent 15 years as Trinity’s assistant athletic director.

Others who were honored during the scholar/athlete banquet: