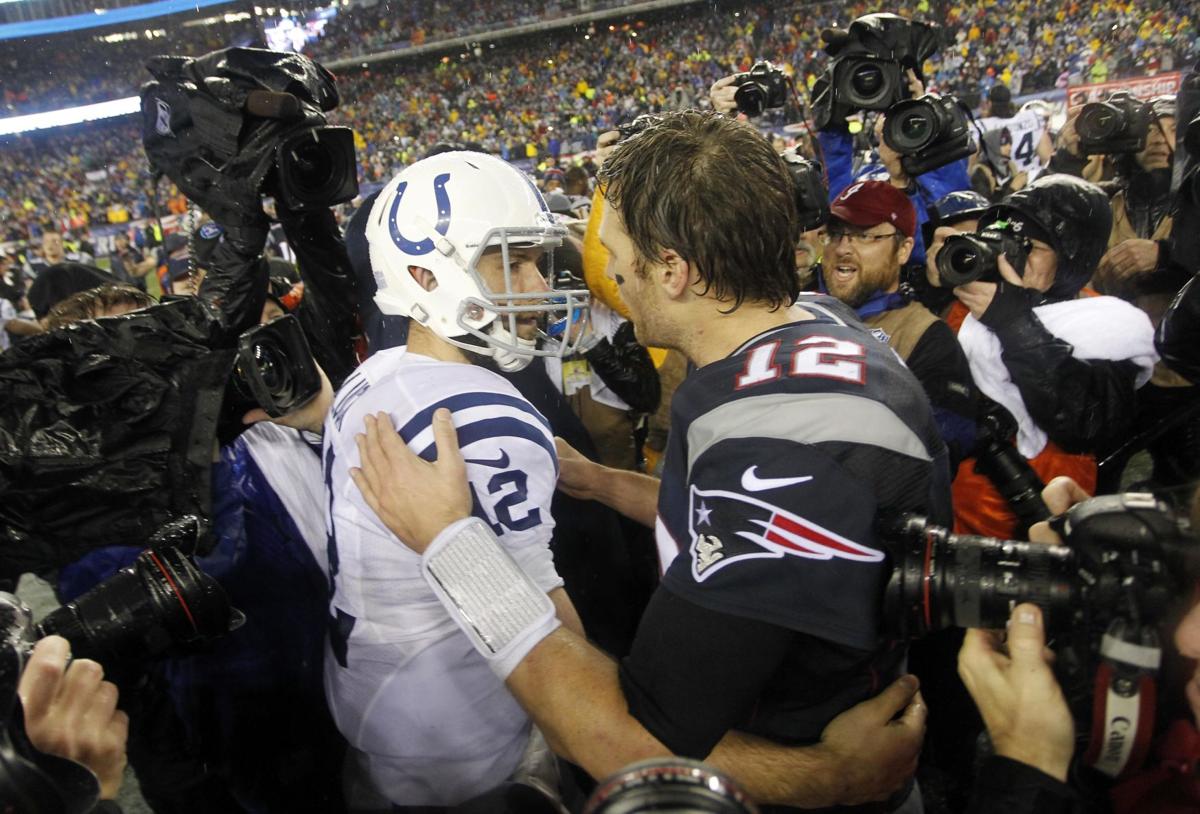 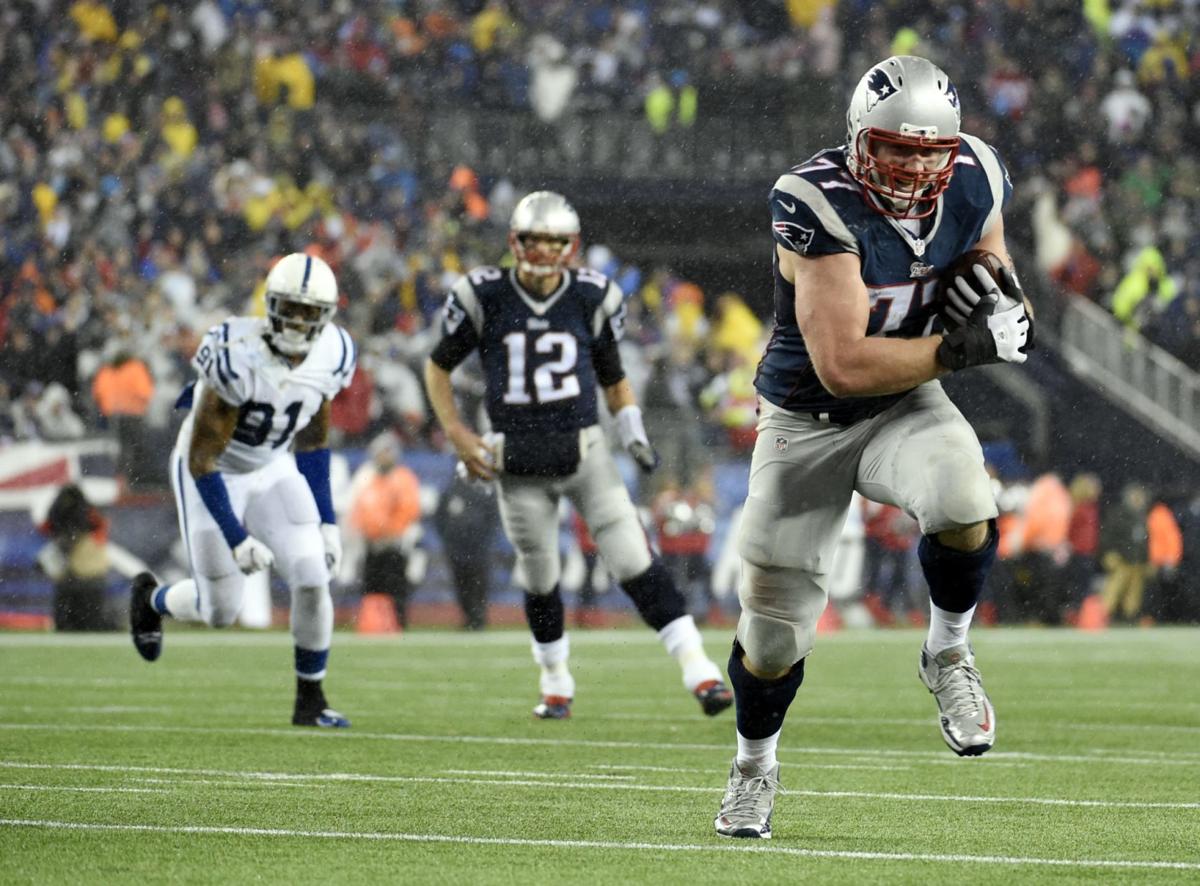 New England Patriots tackle Nate Solder (77) catches a pass from quarterback Tom Brady (12) and runs for a touchdown against the Indianapolis Colts in the third quarter of Sunday's AFC Championship Game at Gillette Stadium.

New England Patriots tackle Nate Solder (77) catches a pass from quarterback Tom Brady (12) and runs for a touchdown against the Indianapolis Colts in the third quarter of Sunday's AFC Championship Game at Gillette Stadium.

FOXBOROUGH, Mass. -- Thirteen years after winning their first Super Bowl together, Joe Montana was three months shy of retiring as a member of the Chiefs, and Bill Walsh was finishing up a three-season stint at Stanford.

Thirteen years after winning their first Super Bowl together, Terry Bradshaw was finishing his fourth season as a TV analyst, and Chuck Noll’s Steelers had won a grand total of one playoff game over the seven previous seasons.

Thirteen years after winning their first Super Bowl together, Troy Aikman was learning he’d be inducted into the hall of fame that coming summer, and Jimmy Johnson was finishing his seventh season as a studio analyst while the Cowboys were on their fourth coach.

But 13 years after winning their first Super Bowl together, Tom Brady and Bill Belichick will be competing to win another one.

The winningest quarterback-coach combination in the history of the NFL made sure of that Sunday night in most emphatic fashion, taking an early lead and never relenting — stamping out upstart Indianapolis with a three-score third-quarter dagger, and dominating their way to Glendale, Ariz., with a 45-7 obliteration of the Colts in the AFC championship game.

By now, particularly in this age of parity, NFL success isn’t supposed to be sustained for so long. Just ask the other three quarterbacks who have won at least three Super Bowl championships. Most dynasties die quickly in football. But, then, most aren’t the caliber of Brady and Belichick.

In fact, if winning is the lone criterion, a case could be made that none is of their caliber. At Edition No. XLIX, Brady will likely become the first signal caller ever to start six Super Bowls. And Belichick will match Don Shula as the only coach to take his team to the big game six times. And Belichick needed 13 fewer seasons than Shula to reach half a dozen conference championships.

The Patriots got out to the fast start they’ve been seeking unsuccessfully in recent contests — doing so this time with some help from the Colts. Josh Cribbs made the first major mistake of the game, so badly misplaying a punt that the ball hit him in the helmet and bounced right into the arms of New England cover man Darius Fleming.

The Pats covered the remaining 26 yards in six plays, and with LeGarrette Blount bulldozing in from a yard out, the home team took the first lead less than five minutes into play. They’d subsequently double it by the end of the first quarter, again from the Indy 1, again with some muscle, this time flexed when fullback James Develin dragged his defender across the goal line.

When the Colts punted on the next series, the game looked like it was on the verge of a laugher. The Pats methodically marched to the Indy 26 — but on first down Brady forced an ill-advised throw to Rob Gronkowski, and linebacker D’Qwell Jackson picked it off. The Colts then made good on that momentum swing, going the length of the field before Zurlon Tipton halved the lead with a one-yard run. And when the Pats were forced to settle for a field goal before the break, a 17-7 lead seemed suddenly tenuous inside the stadium.

Maybe it was a product of seeing the Pats erase a pair of 14-point deficits a week prior. Maybe it was having just watched the Seahawks’ improbable comeback from 16 down to the Packers. Or maybe it was an overreaction based on the perception the Colts would be a pushover.

Whatever it was, 12 minutes later it had been washed away in a driving rain. After completing just five of his 12 throws in the second quarter, Brady hit on his first eight passes of the third — two of which went to the end zone.

With Blount doing the rest en route to another massive night for the Patriots running game against the Colts, Brady capped the Pats’ first drive of the second half with a 16-yard connection to usual left tackle Nate Solder, who’d reported as eligible and leaked off the line on third-and-one. Then Brady finished New England’s second post-intermission series by rifling a rocket to Gronkowski on a five-yard slant.

With a massive spike the lead expanded to 24, then before the end of the quarter Darrelle Revis intercepted Andrew Luck, returned it 30 yards, and on the next play Blount rumbled home from 13 yards out. His second touchdown of the game was the sixth of his postseason career, all of them — tellingly — coming in two games against the Colts.

Blount’s third TD, Jamie Collins’ interception, the chants of “Arizona,” and a ceremonious second-down exit for Brady were simply part of the celebration.

The Pats will have their hands full with the Seahawks, who’ll try to repeat as champs. But that’s to be digested over the next couple weeks. For now, just savor the run that started in earnest with Brady’s first career start — a home victory by a score of 44-13 over the Colts.

A 45-7 win over Indy would make quite the symmetric bookend, but, of course, this isn’t the end. In fact, it may yet be far from it.

Because 13 years after winning their first title together, Brady and Belichick have a chance to be the best yet again.

JUST how unlikely were two of the three players who received touchdown passes from Brady in the conference title game?

One went to Develin, who played in the af2, the low-level arena football league that had a franchise in Manchester, after going undrafted out of Brown University. And Solder, who briefly played tight end in college at Colorado, and was recruited to play basketball at Dartmouth, but bulked up and has been Brady’s blindside protection since Matt Light retired.

WITH starting center Bryan Stork out with a knee injury, the Patriots again kicked Ryan Wendell into the snapper’s position and started Josh Kline in his vacated spot at right guard.

Joining Stork on the Patriots’ list of inactive players was defensive lineman Chris Jones, which came as something of a surprise, but explained the team’s elevation of practice squad player Joe Vellano a day earlier.

Receiver Brian Tyms was also inactive after contributing in the kicking game and getting snaps in the passing game over recent weeks, but rookie James White was the only running back sidelined. That meant Jonas Gray, who was idle against the Ravens in Round 1, was active against the team he toasted for 201 yards during the regular season.

Dave D’Onofrio covers the Patriots for the New Hampshire Union Leader and Sunday News. His e-mail address is ddonof13@gmail.com.