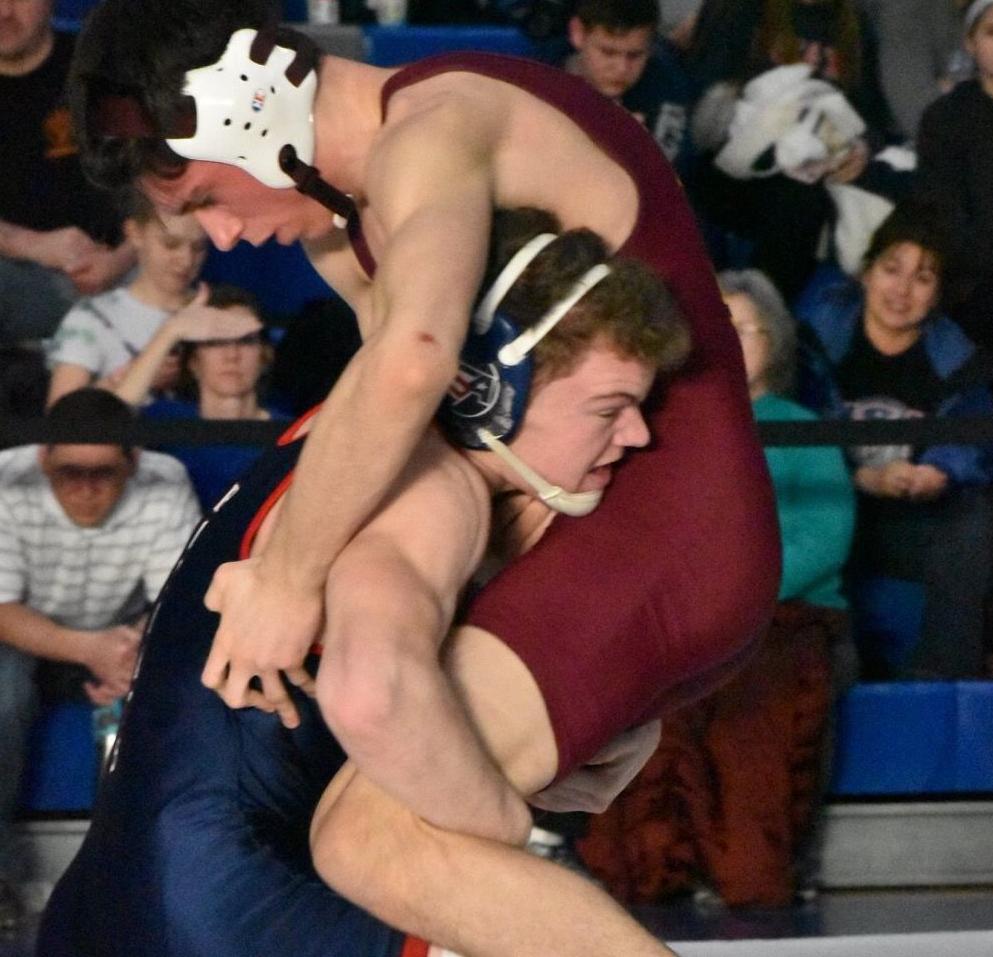 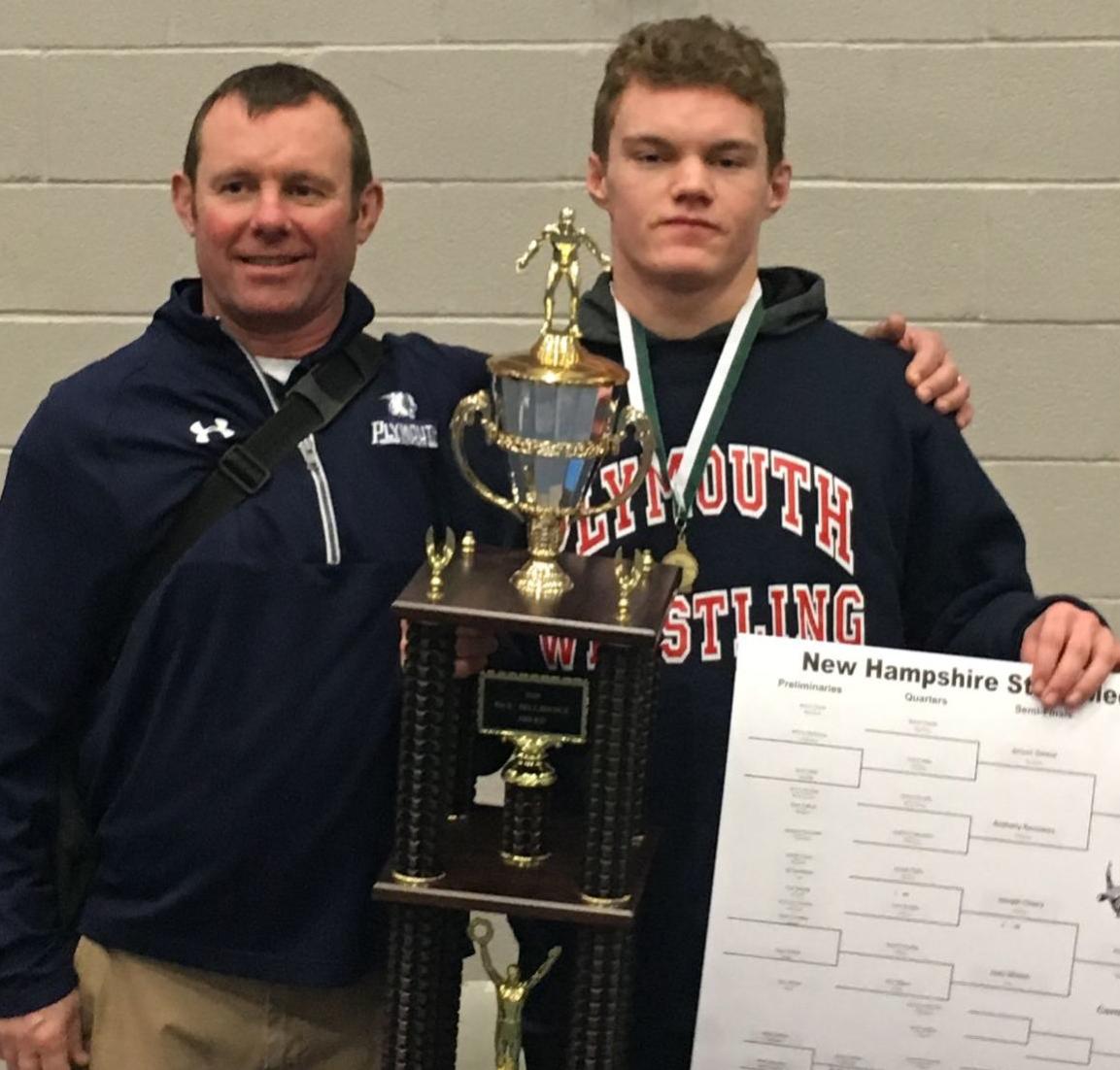 Plymouth coach Randy Cleary and his son, Joe Cleary, who was tops at the state Division III meet and Meet of Champions.

Plymouth coach Randy Cleary and his son, Joe Cleary, who was tops at the state Division III meet and Meet of Champions.

Whether he was considered the clear favorite or the underdog, Plymouth Regional High School senior Joe Cleary was nearly unbeatable on the wrestling mat last month.

Cleary went 20-1, secured his fourth NHIAA Division III state championship en route to helping the Bobcats capture their program’s 13th team crown and won the 152-pound weight class at the Meet of Champions as the third seed. He was also named the Meet of Champions’ most outstanding wrestler.

For his impressive and trophy-filled campaign last month, Cleary was chosen as the February Apple Therapy Services/Bedford Ambulatory Surgical Center/Express MED Athlete of the Month by the New Hampshire Union Leader Board of Judges.

“We were in pretty good shape heading into the season-ending tournaments,” said Cleary’s dad, Randy, who has coached the Plymouth wrestling team to 11 state championships. “We felt Joe and all the individuals on the team felt physically ready to compete with anybody. The tough part of wrestling is to be mentally prepared and not let any doubts creep in.”

Joe Cleary, who also played football for the Bobcats, entered the Division III championship meet Feb. 22 at Pelham High School as the 152-pound class’ top seed and feeling “pretty comfortable.” He previously won the 106-pound class title as a freshman, the 120 as a sophomore and the 138 as a junior and had seen the rest of his competition in the 152 class this year earlier in the season.

“I was just trying to get myself ready for next week (Meet of Champions) and to stay alert in every situation and stay aggressive,” Cleary said.

His victory over second-seeded David Carvalho of Lebanon in the 152-pound final was a crucial one. The Plymouth resident pinned Carvalho at 1 minute, 19 seconds to secure his fourth individual state title and dash Bow’s chances of catching Plymouth for the team championship.

“Joe didn’t know at the time but Bow was still in the running chasing us,” Randy Cleary said. “It was a two-team race and we had lost a heartbreaker at 145. Joe was the next weight up and Bow was still in the race at that time with a heavyweight heavily favored. Joe’s win by pin put us out of reach against Bow.

“Looking back, that was a pretty big match.”

Randy Cleary said his son is the second Division III wrestler to win four state championships in their career since the division was created in 2011.

While Joe Cleary was happy to achieve an individual goal, both Clearys agreed the Division III meet was all about Plymouth’s team success. Charlie Comeau (120) and Cole Johnston (170) also won individual championships to help the Bobcats earn 167.5 points — 17.5 more than runner-up and 2019 champion Bow.

“We knew we’d be neck-and-neck with Bow,” Joe Cleary said. “We worked so hard all season just to be at this moment and to beat Bow down the stretch of the final matches was a great feeling for me and my teammates.”

At the Meet of Champions at Nashua South one week later, Cleary knew he had serious competition for the 152-pound title. Top-seeded Anson Dewar of Merrimack and second-seeded Joey Wilson of Keene, the Division I champion, both defeated Cleary during the regular season. Cleary entered the Meet of Champions winless in three meetings with Wilson and 0-1 against Dewar.

“It was a little different in Meet of Champions than D-III, where clearly he was the favorite to, in a lot of people’s minds, clearly not only the underdog but the underdog under two people,” Randy Cleary said. “All day everyone was saying, ‘The (Dewar)-Wilson match. Can’t wait for it.’ In my mind, I was thinking you forgot about one kid.”

When Cleary faced Wilson in the semifinals, he approached the match differently than his previous three against the Division I champion. After watching a lot of film of those prior matches and making a few adjustments, he said he had a new mindset and stayed focused the entire semifinal bout.

Cleary defeated Wilson, 5-1, to earn a rematch with Dewar in the final. The two-year Plymouth captain then pinned Dewar in the third period to earn an 8-6 victory and capture the 152-pound championship. Cleary tied the score at 6-6 about one minute into the third period with an escape before later pinning Dewar.

“Before the match, I remember being nervous,” Cleary said. “He beat me before. But once you get on the mat, you lose all those nerves and do what you’ve been doing and remember how much hard work you put into it and let it fly out there — and I walked away with the win.”

When the referee raised his hand in victory, Cleary said that was “probably the most happy I’ve ever been in my life.”

“I was in disbelief,” he said. “I remember looking around the gymnasium in shock. It was definitely a special moment.”

After capturing the 152-pound title and the tournament’s most outstanding wrestler award at the Meet of Champions, Cleary reached the Round of 16 in his weight class at the New England Championships in Methuen, Mass., earlier this month.

He finished his Plymouth career with a 146-22 record and said he hopes to wrestle at whichever college he attends.

“Like all the athletes that I coach, we expect so much from them and expect them to work so hard,” Randy Cleary said. “Any wrestling coach will say the same thing: they pour their lives into this sport. To put so much in and not get out what your goal is or expect to get in the end is truly heartbreaking ... I’m so grateful that his hard work paid off for that reason.”

King, a junior forward, averaged 27 points, eight rebounds, 2.7 assists and 2.3 steals, shot 56% from the field, 43% from 3-point range and 85% at the free-throw line (51-for-60) over Bedford’s 8-1 end to the regular season. Huckins, a sophomore, averaged a double-double (18.6 points and 10.4 rebounds) as Newfound went 6-0 in the Division III regular season and won two playoff games last month to reach the semifinals.

Pearson, a sophomore forward from Nashua, recorded 10 points on eight goals and two assists over a 4-3-2 February run for Yale.

Murdock, a fifth-year senior from Exeter, won the 5,000-meter run and finished runner-up in the mile run to help UNH place fourth at the America East Championships Feb. 22.

Trudel, a sophomore, won the 3,000-meter run and took third in the 1,500-meter run at the NHIAA Division II Championship on Feb. 9 and took seventh in the two-mile run at the New England Interscholastic Indoor Track and Field Championship on Feb. 29. Seleny, a senior, won the 300-meter dash, finished runner-up in the 55-meter hurdles and was part of Pinkerton’s record-setting and first-place 4-by-200-meter relay team at the NHIAA Division I Championship and then placed seventh in the 55-meter hurdles at the New Englands.

Hopkins, a senior from Windham, won the 50-yard freestyle, placed second in the 100-yard backstroke, took third in the 100 freestyle in school-record fashion and helped St. Michael’s place fourth in the 400 freestyle relay at the Northeast-10 Conference Championships Feb. 9.

Athlete of the Month recipients are honored at the annual Leaders: A Celebration of Sports Champions event held in February.