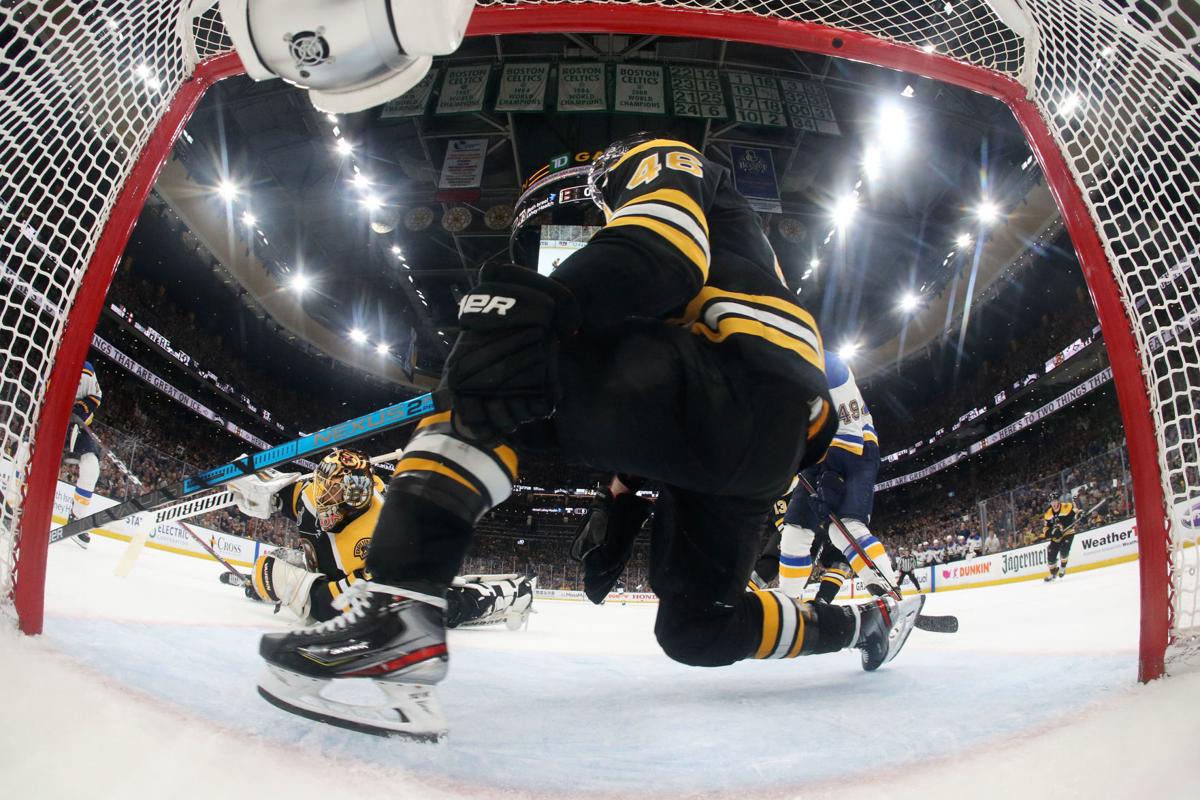 Bruins center David Krejci blocks a shot, saving a goal, in front of goaltender Tuukka Rask during the second period of Thursday's Game 5 of the Stanley Cup Final against the St. Louis Blues. 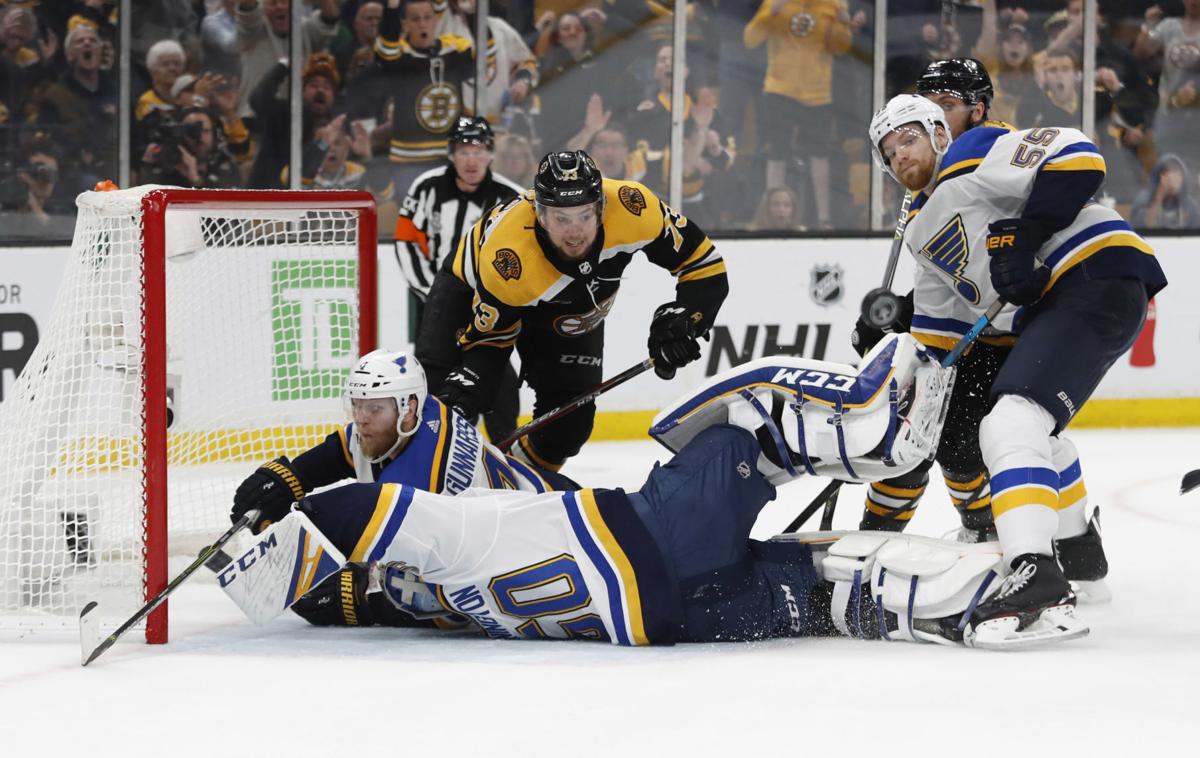 Bruins center David Krejci blocks a shot, saving a goal, in front of goaltender Tuukka Rask during the second period of Thursday's Game 5 of the Stanley Cup Final against the St. Louis Blues.

OK, IT’S TIME to haul out the clichés for your Boston Bruins.

Backs to the wall.

Feeling — justifiably so — that they were robbed by the officials in Game 5, the Bruins, the favorites in this series, have to, pardon the cliché, put it in their rear view mirror and get on with the business at hand.

Win two games in a row, the second back at TD Garden, and win the Stanley Cup.

Sounds simple enough, right? Well, in some ways, it is.

Remember the hand pass that wasn’t called against the Sharks, actually giving San Jose a Game 3 overtime win that left the Blues behind 2-1 in that series? That one was actually worse than what we saw Thursday night. The non-call actually lost the game. The Blues won the next three games to advance to the Stanley Cup Final.

There’s a bigger problem here for the Bruins than what happened to them with the whistle Thursday. Basically, 5-on-5, the Blues have been the better team, the more-physical team. And after the B’s dominated on the power play in Game 3 — four goals on four shots on four penalties — the Bruins went 0-for-5 on the PP the last two games.

The St. Louis defense has pinched the heck out of the points. The Blues have basically shackled the B’s top scorers. The rookie goalie, Jordan Binnington, has shaken off the Game 3 disaster to rebound.

This will be a tall task for Boston. But we’ve seen, on so many occasions, how the Bruins have responded to adversity. The last reaction came after two straight losses to Columbus before three straight wins while allowing just four goals. All year long, when things have looked bad, this team has responded.

No reason to count them out Sunday night.

Like all the other major sports, hockey is dealing with a severe officiating problem. In baseball, the umpires don’t seem to know what is or isn’t a strike — and get overturned way too much. We saw the New Orleans Saints’ trip to the Super Bowl taken away from them. The NBA? Let’s not even get into that.

What to do? What to do? Basically, you live with the mistakes made by human beings. Sorry, Craig Berube’s carping didn’t cause that trip on Ryan Bozak to be missed. It was just missed, just as Don Denkinger blew that call in the 1985 World Series. Calls are made. Calls are missed. When that Columbus goal hit the netting and came back into play, the call was missed — by four guys in stripes.

Replay has fixed some of this stuff. But not all of it. Somethimes, even THAT’S wrong.

The only way Thursday night could have been fixed would be for the refs to have earpieces and for Toronto to stop the game. That’s not practical.

After the game Thursday, coach Bruce Cassidy tried restraint, but said, “I mean this has happened and I’m a fan of the game, this is the National Hockey League and they’re getting a black eye with their officiating in the playoffs and here’s another one that is going to be talked about.

“I thought it was a great hockey game. That call probably, and there’s time, but it really made it difficult for us to get the win tonight. So I’m disappointed. So I guess to answer your original question, it was egregious. But we’re moving on and getting ready for Game 6.”

He was right, but it’s time to move on, time for the Bruins to overcome the call and try to overcome the physical pounding being dished out by a St. Louis team that was able to pound the Sharks into submission in the previous series.

Remember, the Bruins were down 3-2 to the Canucks in 2011 before winning Game 6 at home and Game 7 on the road.

It got a bit lost in the hoopla over the Bruins, but the Patriots received their newest championship rings Thursday night.

More than 400 diamonds. Twenty sapphires. The greatest of all the great rings.

The ceremony, at Robert Kraft’s home, included Tom Brady showing off his beer chugging skills. Two gulps for the GOAT.

It was, in a word, terrific.

Which being us to the uproar created when Brady sought to put a trademark on the name “Tom Terrific.”

As a Mets fan growing up, I knew Tom Seaver as Tom Terrific. He always has been. So, I didn’t know how to feel about this. I had never heard Brady called Tom Terrific. Now, this?

Brady addressed it the other day in a most-perfect way.

Calling the whole thing, “unfortunate,” Brady, who said he doesn’t even like the name, added, “I was actually trying to do something because I didn’t like the nickname and I wanted to make sure no one used it because some people wanted to use it. I was trying to keep people from using it, and then it got spun around to something different than what it was. Good lesson learned, and I’ll try to do things a little different in the future.”

Speaking of doing thing a little different in the future, we give you Julian Edelman. Local hero. New contract. As tough as they come. Then we see the ad promoting an Edelman private signing.

Check it out at www.Patriots.com/ringraffle.

More charity, from the baseball team: “The Red Sox wives will raise funds for the Patient Family Housing Program at Boston Children’s Hospital during the upcoming seven-day homestand with the “Players’ Favorite Things” online auction comprised of baskets filled with autographed items from Red Sox players. Starting today, June 7, fans can bid on baskets that include autographed cleats and bats, as well as an autographed jersey from members of the 2018 Championship team. The online auction will run through Thursday, June 13, at 10 p.m. on redsox.com/basketsforgood.”

Both Dallas Keuchel and Craig Kimbrel wound up in the National League, therefore affecting the American League contenders only if there’s a World Series.

The Red Sox needed a reliever, but you knew Kimbrel wasn’t coming back. Every team needs a starter, but the feeling here is that Keuchel and his skills are more suited for the National League.

Other pitchers will be available to the contenders via trade.

Finally, Zdeno Chara pulled a Willis Reed Thursday night. But unlike Reed’s limping out onto the court to spur his Knicks in 1970, the Chara jolt didn’t quite work. Let’s see if the guts of this warrior can help get it done the next few nights.