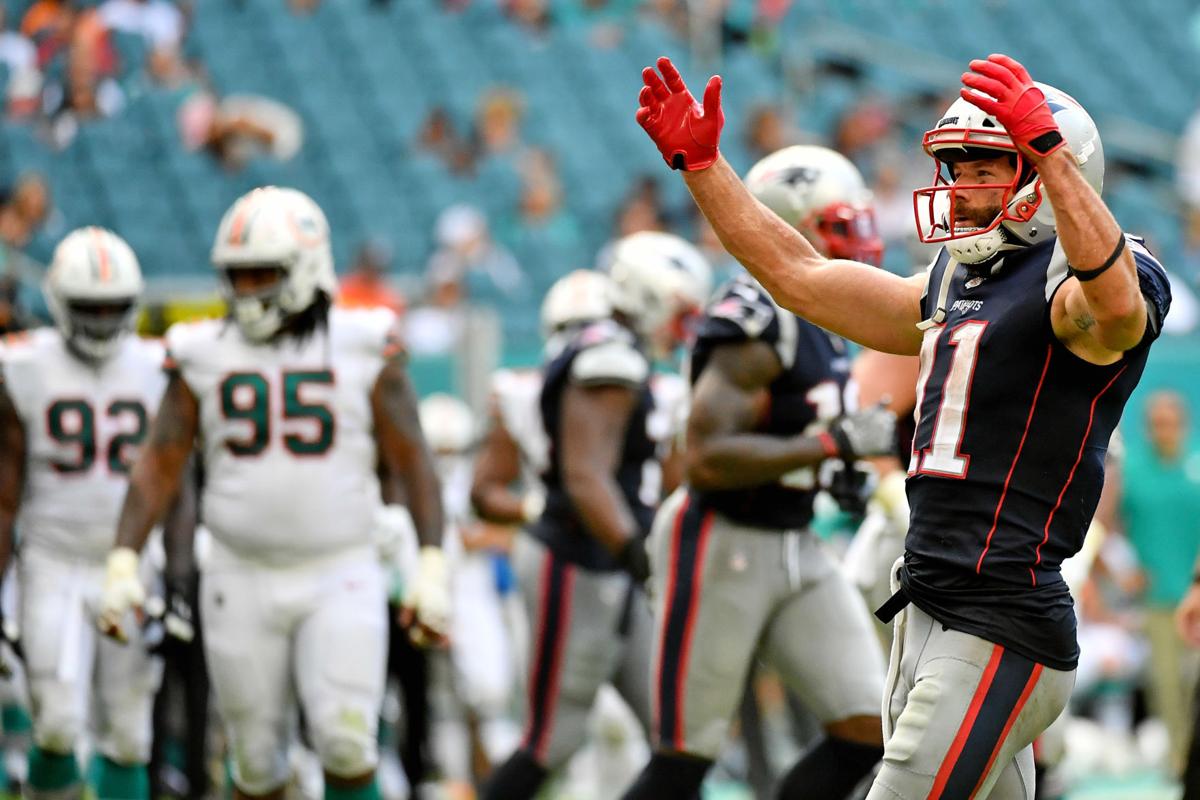 Patriots wide receiver Julian Edelman celebrates after scoring a touchdown against the Dolphins in September 2019. Miami fans are accustomed to this kind of scene when their team plays New England. 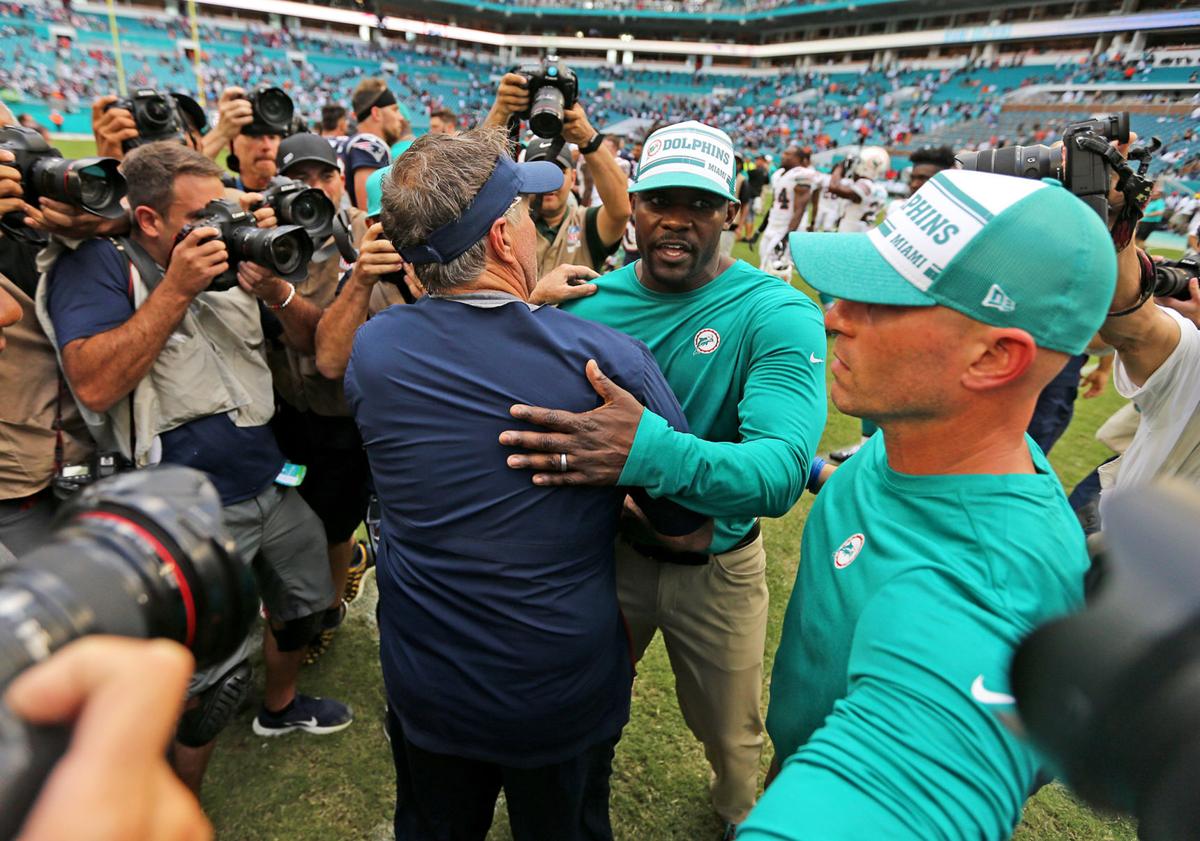 Patriots wide receiver Julian Edelman celebrates after scoring a touchdown against the Dolphins in September 2019. Miami fans are accustomed to this kind of scene when their team plays New England.

Trauma can shatter your sense of security, leaving you feeling helpless and vulnerable in a dangerous world.

Or in the Miami Dolphins’ case the past two decades, it’s a dangerous division during the New England Patriots’ reign of terror over the AFC East.

Often, the unsettling thoughts and feelings of traumatic stress — as well as any unpleasant physical symptoms — can start to fade after life gradually returns to normal.

But PTPD — Post Traumatic Patriots Dominance — still lingers in most of us.

We’ve been so trained to expect and endure abuse from New England, it’s a challenge to digest that the Dolphins (8-5) will have the more talented team on the field in Sunday’s home finale against the team that has won six championships in 21 seasons.

The New England Patriots (6-7) are limping across this season’s finish line.

Miami has a shot at delivering the Patriots’ first season without a winning record since Belichick’s first year in 2000 — if coach Brian Flores can lead his team to a victory.

The Dolphins have split this series six of the past eight seasons, no matter the talent disparity. And that includes last year’s impressive season-closing upset, which prevented New England from having home-field advantage throughout the playoffs.

Yet somehow, something keeps me from feeling comfortable about Sunday’s game.

And it’s not the fact that New England’s strengths — their running game and ability to create turnovers — play into Miami’s weaknesses.

It’s not Belichick’s jaw-dropping 21-5 record with the Patriots against rookie starting quarterbacks, such as the Dolphins’ Tua Tagovailoa, who will be making his seventh NFL start and first against the NFL’s wicked coaching genius.

It’s the years of dominance we’ve witnessed and decades of trauma the Patriots have caused South Florida and Dolphins fans. That’s what makes many of us uncomfortable.

The wounds are deep because of all of former quarterback Tom Brady’s come-from-behind performances in the game’s final two minutes, or stunners like when Wes Welker scored a 99-yard touchdown to win a game in 2011.

Or when Randy Moss scored four touchdowns and destroyed two safeties’ knees on a touchdown catch in that 2007 domination of the 1-15 Dolphins.

But those were the old Patriots.

Sometimes it’s not even what they do to the Dolphins, considering they’ve pulled off come-from-behind victories over the Seattle Seahawks and Atlanta Falcons to win two of the Super Bowls

Miami’s season-opening 21-11 loss to New England was Miami’s largest loss of the season, and the fact the Patriots pummeled the Dolphins on the ground, gaining a season-high 217 rushing yards, was status quo for this annual series.

“We’re a lot different than the team in September, which you should be, right? They’re a lot different team than who they were in September,” said Dolphins safety Eric Rowe, also played for the Patriots. “We were still trying to come together. We only had training camp, a couple weeks of practice, no game, no game reps. ... We’re all playing with a lot of energy and getting a turnover each game.”

Just like these Brady-less Patriots are different, less menacing, these Dolphins have a new aura about them under Flores, one of the many fruits from the Belichick coaching tree.

Ironically, the Patriots went from 5-11 in Belichick’s first season in 2000 to 11-5 in his second season in 2001, which ended as the Super Bowl champs with a young Brady as his starter.

You know who had a 5-11 record in his first season?

Flores, with the Dolphins.

A win on Sunday against New England keeps the Dolphins on a 11-win trajectory, and if the Dolphins achieve that in the second year of this full-scale rebuild, who knows what comes next.

It’s likely the playoffs. And maybe the AFC’s next dynasty.

But a win Sunday will reinforce that there’s no need to fear the big, bad Patriots.

It’s time the era of PTPD comes to an end.