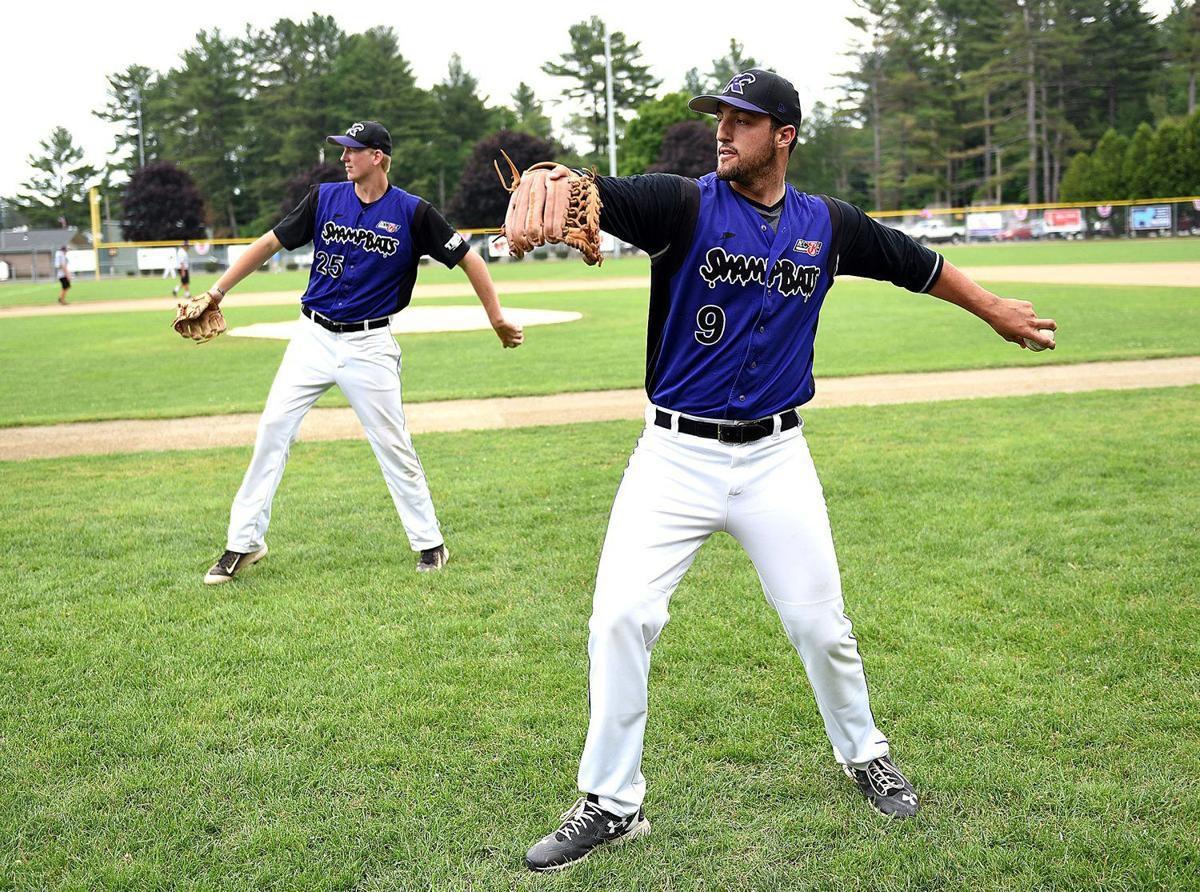 Manchester’s Carmen Giampetruzzi, foreground, and Ryan Avidano warm up before a Keene Swamp Bats game in July of 2016.

THE NCAA’S DECISION to grant an extra year of eligibility to its spring athletes affected by COVID-19 could result in the Winnipesaukee Muskrats and the Keene Swamp Bats, New Hampshire’s two entries in the New England Collegiate Baseball League, having better talent on their rosters this summer than in a typical season.

Players who opt to return to school and use that extra season of eligibility will also be eligible to play in the NECBL this summer (all NECBL players must have at least one year of NCAA eligibility remaining). According to Keene general manager Kevin Watterson, the fact that the NCAA baseball season was canceled earlier this month has left many coaches scrambling to find summer teams for their players.

“We’re being inundated with calls from coaches around the country who normally would shut down many of their kids based on games played,” Watterson explained. “If a pitcher has pitched 60 innings (in college), that coach doesn’t feel like he needs to send his player out any more. Now these coaches want their kids to play.

“I think the level of talent will be higher in the entire league — and in (the Cape Cod Baseball League).”

No tournament games in college baseball also means many of the top college players in the country will be able to report to their summer teams sooner than usual. Watterson said each NECBL team will have a training period, a shorter version of MLB’s spring training, to make sure the players are physically ready for the 44-game regular-season schedule.

“In the past, those kids we had coming from Louisville, LSU and Vandy wouldn’t get here until July 1,” Watterson said. “With no regionals, super regionals or Omaha (site of the College World Series) this year there is none of that. They will be here on time, so we’re gonna have our strongest team on Day 1. In the past, we’ve had kids coming in June 10, June 20, July 1.”

The Muskrats and Swamp Bats are both scheduled to open their season on June 3, and Watterson said he’s hopeful the NECBL won’t have to delay the start of its season.

“We have a conference call weekly just to update where we’re at,” he said. “I tell people the calendar is our friend today. The NECBL doesn’t start for a little less than three months. We don’t have to make that decision today. We’re hopeful that’s what’s going on with (the coronavirus) that some positives take place and that we’re able to play a season. If things don’t go in the right direction society-wise and we ought not to be playing, then we won’t play. At least we have the calendar on our side to see what happens in the next five or six weeks.”

If the NHIAA does offer a spring sports season, we know it will be an abbreviated one. The starting dates for spring sports have been pushed back to April 13 (practice) and April 27 (games).

Londonderry High School baseball coach Brent Demas, who is the president of the Baseball Coaches’ Association of New Hampshire, said if a shorter regular season is played, an open tournament in each division is the best way to determine the state champions in his sport.

“Because the integrity of the regular season will be compromised, this is the NHIAA’s best solution, and it’s not a bad solution,” he said. “The fewer games there are, the more the importance of every game increases, but if you’re not worried about making the tournament you’re more likely to take it slow — not throw Johnny 100 pitches his first time out — and gear up for what should be some pretty good playoffs. At this point, most of us just want a season and we’ll take whatever we get.”

Lacrosse and softball teams could try to jam the full number of regular-season games into the shortened time frame, but limited pitching plus the NHIAA restrictions on how often a player can pitch make it difficult for baseball teams to play more than three games per week.

One additional day is all that’s needed in terms of time to hold an open tournament. Each division could use a “play-in” round to reduce the field to 16 teams, and proceed with the normal tournament schedule from there (preliminary round, quarterfinals, semifinals and championship game).

Using Division I as an example, 10 of the 22 teams would get a bye and the 12 others would be involved in a play-in game.

“I’m trying to find some positives in this situation and hopefully this can show that we can revamp the playoffs in the future — not for an open tournament, but just to show that it doesn’t have to be the same-old, same-old every year,” Demas said. “I’ve been advocating for a playoff change in baseball for what’s gotta be 10 years now.”

Barry averaged 13.2 points per game during the 2018-19 season, when he finished 11th among Ivy League players in scoring. He also ranked 10th nationally in 3-point shooting percentage (.445) and led the Ivy League in assist-to-turnover ratio (2.20) that season.

The Joe Yukica Spring Clinic for high school and youth football coaches in New Hampshire that was scheduled for April 4 at the University of New Hampshire has been postponed. The clinic will be held at a later date this spring if possible.