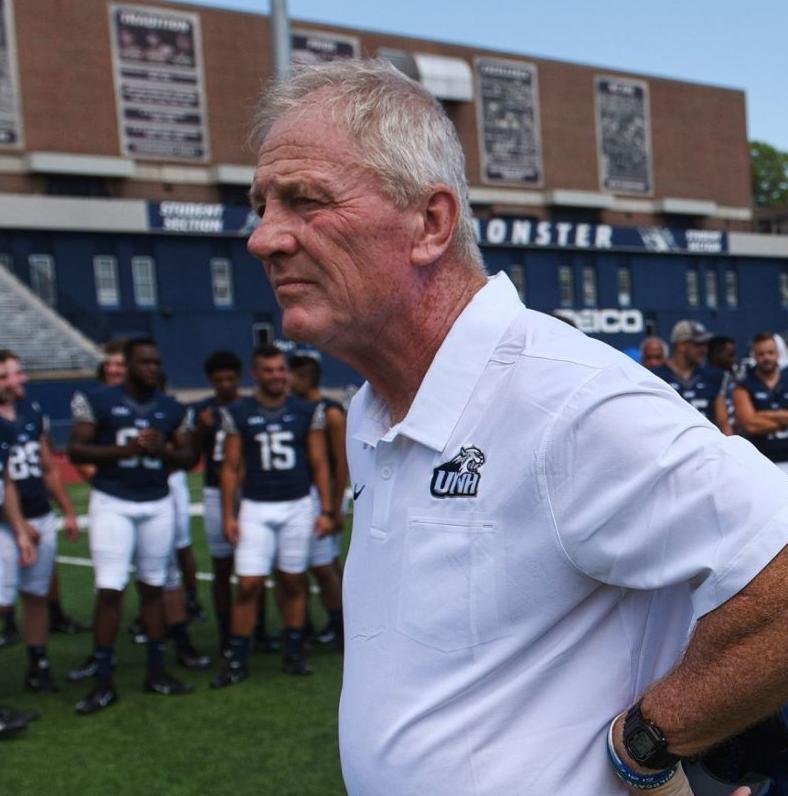 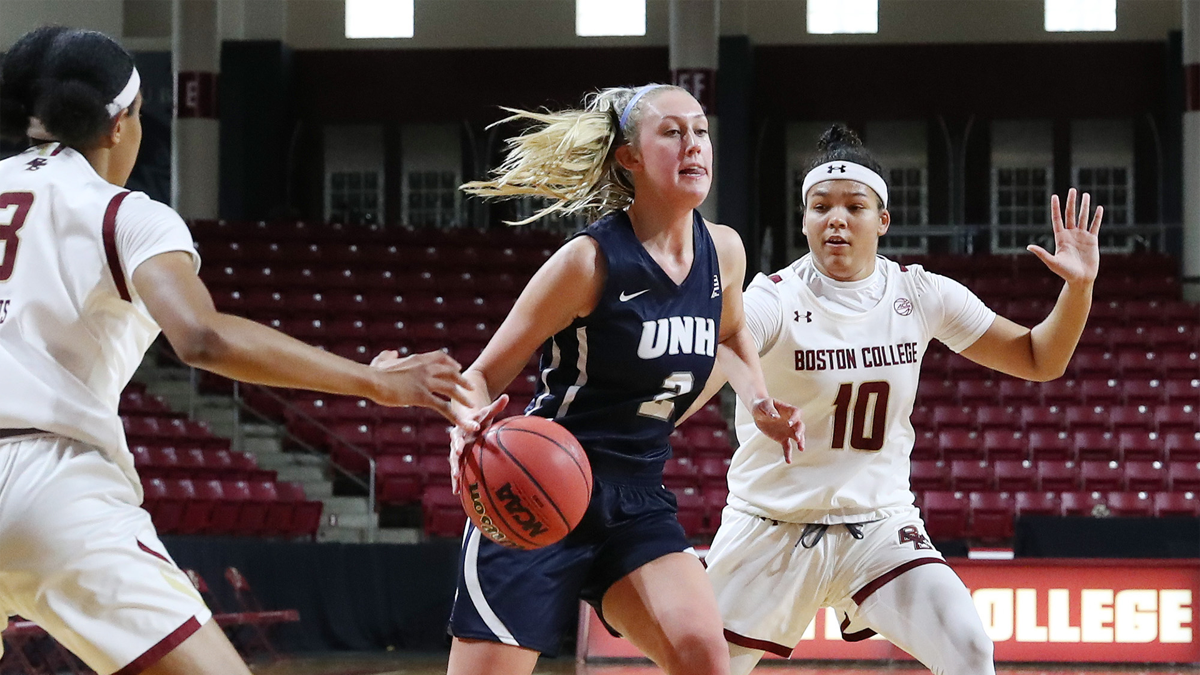 Pinkerton Academy grad Brooke Kane scored 10 points in UNH’s loss to Bryant on Nov. 27. Kane is starting to assert herself in her sophomore season.

Pinkerton Academy grad Brooke Kane scored 10 points in UNH’s loss to Bryant on Nov. 27. Kane is starting to assert herself in her sophomore season.

THE EARLY SIGNING period for football begins Dec. 16, but that’s probably not going to be a busy day at the University of New Hampshire football office. Not as busy as it usually is on that day, anyway.

UNH is gearing up for a spring season and still has seniors on its roster who will be on scholarship through the spring semester. In addition, since the NCAA granted fall athletes an extra year of eligibility because of COVID, those seniors could return on scholarship for the 2021 season as well. Simply put, there’s not a lot of scholarship money available.

“Everything is on hold,” UNH coach Sean McDonnell said. “Everybody is getting an extra year of eligibility, so we have eight seniors right now and we had used their scholarships in certain ways to take care of them and we thought we were just taking care of them for the fall semester. The big problem in terms of recruiting is since we have the spring semester and next fall semester they still have to go into our ‘count’ as they say — our count of 63 (scholarships). We’re very limited.”

McDonnell said he expects the eight seniors on the UNH roster to play the spring season and would like to have them for the 2021 season as well, but that decision will be made by each athlete.

“We are really on hold with offering a ton of scholarships and we even called kids and told them we couldn’t take their commitment with what’s happened with the pandemic, the seniors and the NCAA eligibility,” McDonnell continued. “And then it trickles down to walk-ons. We’ve been able to do a great job with the walk-ons over the years, especially with in-state kids and kids who have had connections to the New Hampshire program. Unfortunately with our roster (size) and not being sure who’s going to come and who’s going to go next May after the season — people may decide not to play anymore and move on — you can’t offer anything or give anything because you’re in nowhere land.”

Even if some or all of the current UNH seniors decide to leave school after the spring season — and notify McDonnell of their plans to do so well in advance — the pool of recruits will have been picked over thoroughly by that point. The top recruits will likely have already made their decision. It won’t be easy filing those available scholarship spots with the type of player UNH would typically recruit.

The pandemic has created a situation where there are far more high school seniors good enough to play college football than there are roster spots (and scholarships) available.

“I’ve got a ton of calls in the past two weeks from people all over New England,” McDonnell said. “They tell me, ‘We’ve got a kid here. I know there’s no scholarships, but he’ll walk-on for a year.’ I tell them, ‘Let us look at the tape.’ Unless he’s a guy who’s gonna change the landscape of that position as a walk-on, I’m a very big believer in taking care of the kids who are here right now.”

It was a roller coaster week for former Dartmouth defensive lineman Niko Lalos, who was moved from the New York Giants practice squad to the active roster Saturday, one day before the Giants beat Cincinnati 19-17.

Lalos made an impact in his NFL debut as he intercepted a deflected pass by Bengals quarterback Brandon Allen late in the third quarter. The interception led to a field goal that gave the Giants a 16-10 lead. After the game, per NFL rules, he returned to the team’s practice squad.

Lalos signed with the Giants as an undrafted free agent in April after the 2020 NFL Draft. He graduated from Dartmouth in March and played in 24 games during three seasons with the Big Green. Lalos recorded 59 tackles (32 solo), 17.5 tackles for loss and had 11 sacks during his college career. He also had one interception and one fumble recovery.

In 2019, Lalos posted career-high totals of 35 tackles (10 solo), 10 stops for loss and 5.5 sacks as Dartmouth went 9-1 for the second year in a row. He was a first-team All-Ivy League selection as a senior, and part of a Dartmouth defense that held the opposition to 12.4 points per game, the second-lowest total in the FCS.

Lalos was named the Hula Bowl MVP in January after he recorded six tackles, two sacks and one forced fumble in the annual college all-star game played in Hawaii.

The dangers of the Draftkings Sportsbook App:

Those who bet on the Seahawks minus 6.5 points Monday night were in good shape until the game’s final seconds. The Eagles trailed by 14 until Richard Rodgers caught a deflected 33-yard touchdown pass with 12 seconds to play. Philadelphia coach Doug Pederson then made a curious decision to go for two following the TD. Miles Sanders found the end zone for the conversion, which meant the Eagles lost by 6 (23-17) but rewarded bettors who backed them getting 6.5 points.

Several media outlets reported that BetMGM in Las Vegas took a bet on the Seahawks minus 6.5 points for $500,000.

ICYMI: Pinkerton Academy graduate Brooke Kane had 10 points, six rebounds and four blocked shots in UNH’s 75-72 loss to Bryant on Friday. Kane, a sophomore guard, played in 20 of UNH’s 29 games last season and averaged 2.5 points, 1.5 rebounds and 10.6 minutes per game as a freshman. Her 10-point performance matched her career high in that category.

Former Hanover and Bedford resident Alex Steeves scored the third game-winning goal of his college career to help Notre Dame sweep a two-game series against third-ranked Michigan with a 2-1 victory Saturday night. His brother, Matt, is a senior forward for the Fighting Irish. Both players skated for the New Hampshire Junior Monarchs.

The game-winner was an empty netter with 1:31 remaining that gave the Irish a 2-0 lead, then became a GWG when Michigan scored with 44 seconds remaining.