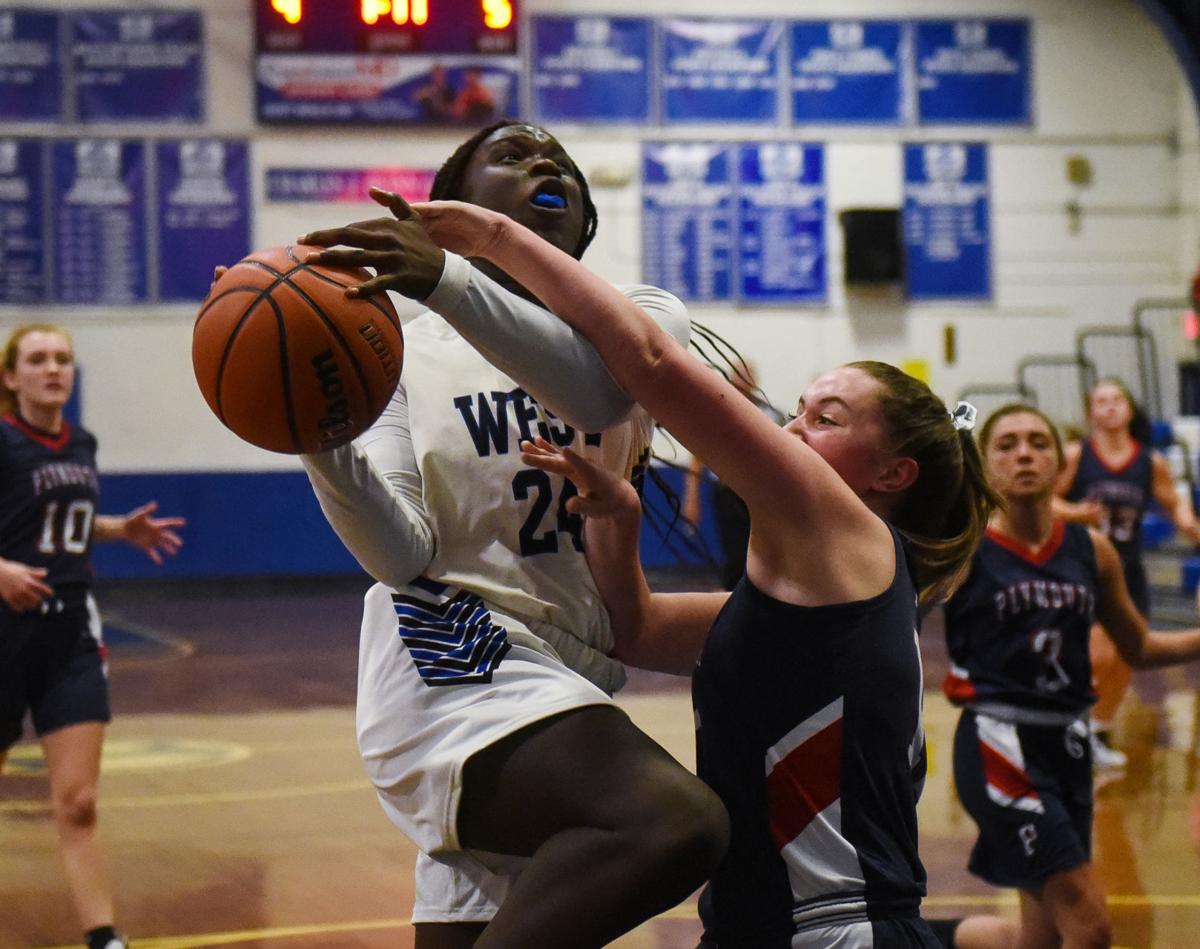 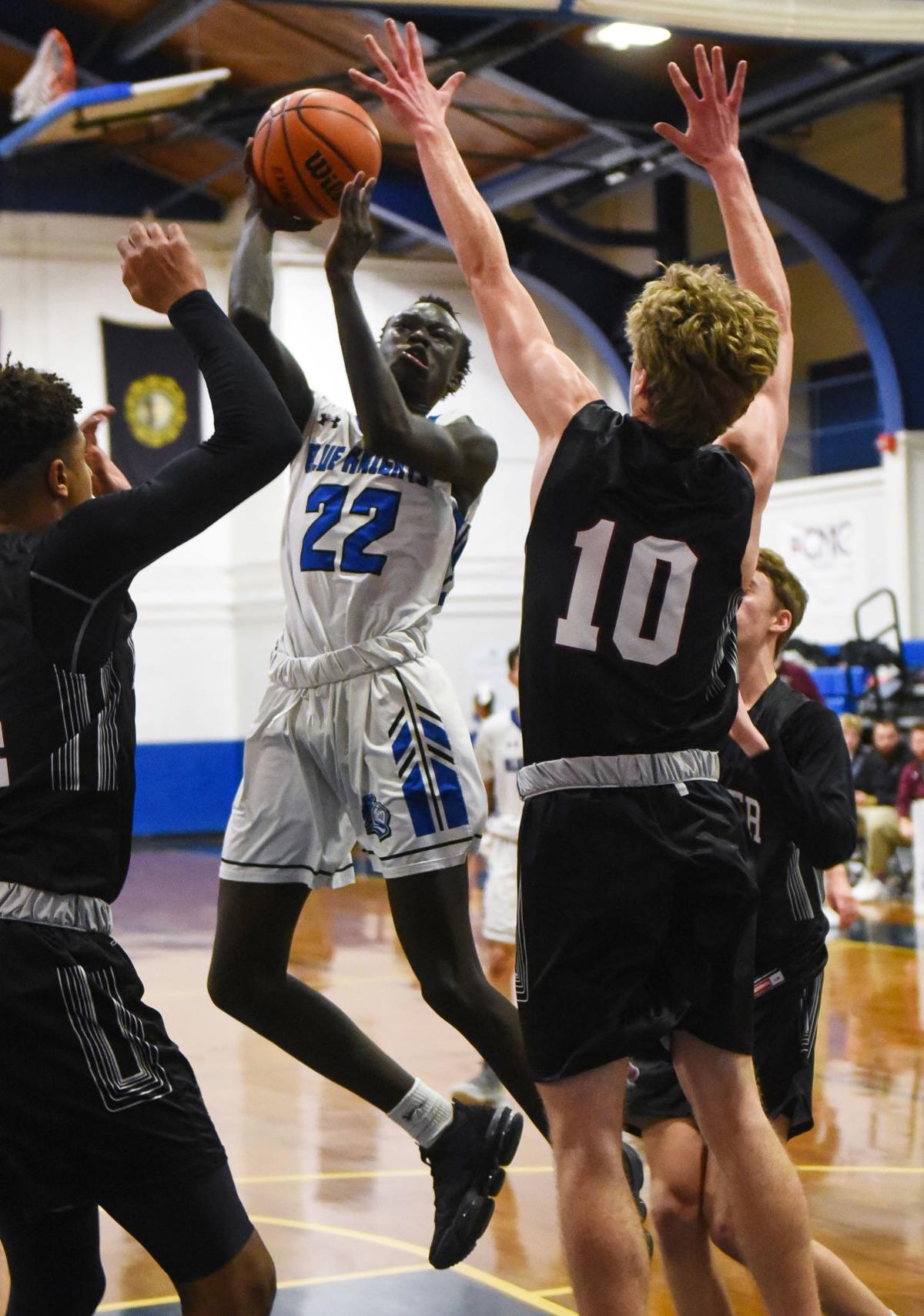 In recent years, the name Teng has become synonymous with Manchester West basketball.

It started with Kuany, who, after a brief stint with the Blue Knights’ boys’ team, moved on to Bradford Christian Academy, a prep school in Haverhill, Mass., where he is currently a senior.

Now it’s Abuk, a junior on the girls’ team, and Kur, a freshman on the boys’ team, who serve as the standard bearers for their respective programs, drawing attention for their athletic prowess.

“A lot of people say I’m better at soccer,” Abuk says. “I don’t really have a preference, though.”

Truth be told, it doesn’t make much of a difference which she’s better at. She excels at both, and much like her younger brother, she’s extremely quiet, letting her play do the talking for her.

“Abuk’s a great leader,” West girls’ basketball coach Gerry Haynes says. “I don’t really know Kur outside the gym, but I’ve known her for three years now. She’s a great leader and leads by example. She does everything and works hard. She’s a good shooter. She leads or is second in every statistical category on the team. She’s definitely second in rebounding. Her steals are high and she’s just always around the ball. Her assists are way up, too. She’s the only one that picks up assists, really. She finds people that are open and is just a great teammate for sure.”

After seeing Kuany pick up a basketball at a young age, Abuk followed suit when she was in the fourth grade, eventually moving on to play at the Middle School at Parkside before going to West.

Kur, likely the best player of the three already, took the same path.

“At Parkside is the first time I saw Kur play,” boys’ coach Justin Gorham said. “I went over and watched him play a little bit as a seventh grader and more as an eighth grader. I was excited. He’s a really smooth basketball player reminiscent of a George Gervin or Alex English. Very smooth. You don’t see that very often. Just the ability to get to the basket. His first step is really quick. He jumps well. He’s still so young that sometimes it’s shocking to watch him play.”

At 14 years old, Kur is an exceptional talent. The skills he possesses are beyond his years and, as Gorham discussed, he has a little bit of an old-school type of game. His best move is a right-to-left crossover he uses to get himself to the left elbow where he often stops on a dime and pulls up for jumper that almost always seems to find its way through the bottom of the net.

Kur is also long enough to finish at the rim without the need for a ton of strength, which helps given that he’s often playing against players that are older and more physically mature than he is.

“His pull-up jumper is incredible,” Gorham says. “You could watch any game at any division and you won’t see that (anywhere else). Nobody will do that. That’s a rare skill they were teaching when I played. He does it so well that once he gets to the point where he can jump over you — and he jumps over guys now — but when he jumps even higher and even quicker they won’t be able to stop that shot at all.

“He needs to get stronger and work on playing against real, good defense,” says Gorham. “If he gets stronger, he’ll be very difficult to stop. Being 14, it’s hard to build muscle. If he continues growing and builds muscle and gets quicker with age and can become a knock-down three point shooter, along with the other stuff, he’d be almost unstoppable in high school.”

Given his coach’s assessment, it’s fun to think about what the ceiling might be for Kur. Sitting in Gorham’s office following a Thursday practice, the freshman makes his intentions very clear.

“My long-term goal is to make it to the NBA one day,” he said. “I have to work hard every day.”

Kur’s assertion isn’t received with the typical join-the-club eye roll. He scored 30 points and grabbed 12 rebounds in his varsity debut against Milford on Dec. 20 and dropped another 30 to go along with seven boards in a 83-78 loss to undefeated Hanover on Tuesday night.

He does eye-popping things on the basketball court that make you wonder how he can possibly be just a 14-year-old kid.

“With him, he’ll ask to guard the other team’s best player,” Gorham says. “When we played Kennett, they had a great shooter and we put someone else on him, but Kur said, ‘No. I want to guard him.’ Then when we played Souhegan he wanted to guard (Matt) McCool. He will ask me to guard these guys and I’ll let him. If he doesn’t do well, switch. It’s rare for a kid his age.”

McCool, a junior, is one of the best players in the state. For a freshman to want to come in and guard him takes a supreme amount of confidence rarely seen in a first-year player. Kur has experience playing against top-tier competition with his AAU team, Expressions Elite.

The question is how long Kur will remain at West. Prep schools like Proctor Academy in Andover and Bradford Christian have already come knocking. Tilton School and Brewster Academy in Wolfeboro have yet to contact him, but the key word here might be “yet.”

“I’m not going to be the guy to hold him back,” Gorham says. “I’ll tell him what I think but I would never tell him he can’t leave (for prep school). I think he should stay one more year and if a really good, prominent prep school comes calling with a good coach, then I think you have to take that opportunity.

“That’s if you’re going to play,” says Gorham. “If you’re going to go just be on the team and just be up there then I don’t want that for him. I think he’s a good kid and has a chance to play at the next level. Not just Division III but he can get to Division I, especially if he grows a little bit.”

Kur is fortunate to have some local players to look up to. Wenyen Gabriel spent three years at Trinity before moving on to Wilbraham & Monson Academy in Wilbraham, Mass. It was there he earned a scholarship to play at the University of Kentucky. Gabriel played two years under John Calipari, and after going undrafted, signed a two-way contract with the Sacramento Kings in July 2018. In October 2019 the Kings converted his contract into a full-fledged NBA contract, which became guaranteed on Jan. 10. Gabriel has since been traded to the Portland Trail Blazers.

“Seeing Wenyen make it to the level he’s at is an inspiration,” Kur said.

Akok Akok is another role model. He spent two years at West before transferring to Putnam Science in Connecticut, where he performed well enough to earn a scholarship to the University of Connecticut. He is currently a redshirt freshman playing around 30 minutes per game.

In Gorham’s educated opinion, Kur is better than both of them.

Asked whether the media attention and comparisons he’s getting are overwhelming, Kur was very direct, saying confidently and very quietly, “It’s not. I’ve been doing this my whole life.”

That’s not to be mistaken as cockiness, just as Gorham’s assessment of Kur’s game at this stage in his life shouldn’t be taken as a guarantee he’ll someday be an NBA superstar.

Tragedy struck Sunday as nine people lost their lives in a helicopter crash in Calabasas, Calif. Among them were NBA legend Kobe Bryant, 41, and his 13-year-old daughter, Gianna, who was becoming a talented basketball player in her own right and dreamed of playing at UConn before taking her game to the WNBA to carry the torch for the Bryant family.

“Man, I’m sick,” Manchester Central coach Sudi Lett, 34, said. “Kobe Bryant was my favorite player. I loved his self-confidence, attention to detail, passion, and love for basketball. He was the most influential person in my life I never met. Huge loss for basketball players everywhere.”

No matter your allegiance on a team level, most fans had an indirect relationship with Kobe. I know I did. As a kid growing up in the late 1990s and early 2000s, I loved rooting against him. He was a Laker after all, but as I grew older I began to fall more in love with basketball and came to deeply respect Kobe’s game. It was obvious he was a generational talent. You could tell your friends at school he stunk all you wanted, but deep down you knew he was clearly one of the best players you would ever see.

Royce Williams, a junior at Trinity, told me he followed a very similar path when it came to Kobe.

“As I was growing up, I knew Kobe was a great basketball player from my dad talking about him and watching his games on TV,” he said. “As I got older and matured with the game and understood it more, I eventually realized how great he was on and off the court. I would watch videos on how great his footwork was and saw his IQ for the game, and I would try to incorporate some of his talent into my own game to help me improve as a player.”

Trinity boys’ coach Keith Bike was fortunate enough to meet Kobe. When Bike, 43, was on the recruiting trail as a player back in the early ‘90s, Kobe’s father, Joe “Jellybean” Bryant, went at him hard to try to get him to commit to La Salle University in Kobe’s hometown of Philadelphia.

“I had somewhat of a relationship with his father and I just feel so bad for his father ...,” Bike said. “His father, when he recruited me, gave me a highlight tape of Kobe playing in high school that I still have in my parents’ basement. When I went on my visit to La Salle, I met Kobe and his family real quick. Jellybean recruited me harder than anyone. As a father myself it’s just heart-wrenching to think about that situation for everyone involved.”

Bike ultimately went on to play his college ball at the University of Hartford in Connecticut, but those memories will stick with him forever, just like everyone’s favorite memories of Kobe will.

“For me, I think the thing that stays with me in terms of Kobe is his willingness to outwork everyone to be great,” Manchester Memorial girls’ coach Greg Cotreau said. “His work ethic was inspiring and can be applied to whatever your passion is. What is very sad to me is, as a girls’ basketball coach, the girls’ game has lost an enormous supporter and advocate for not only girls’ and women’s basketball, but for girls’ and women’s athletics as a whole.”