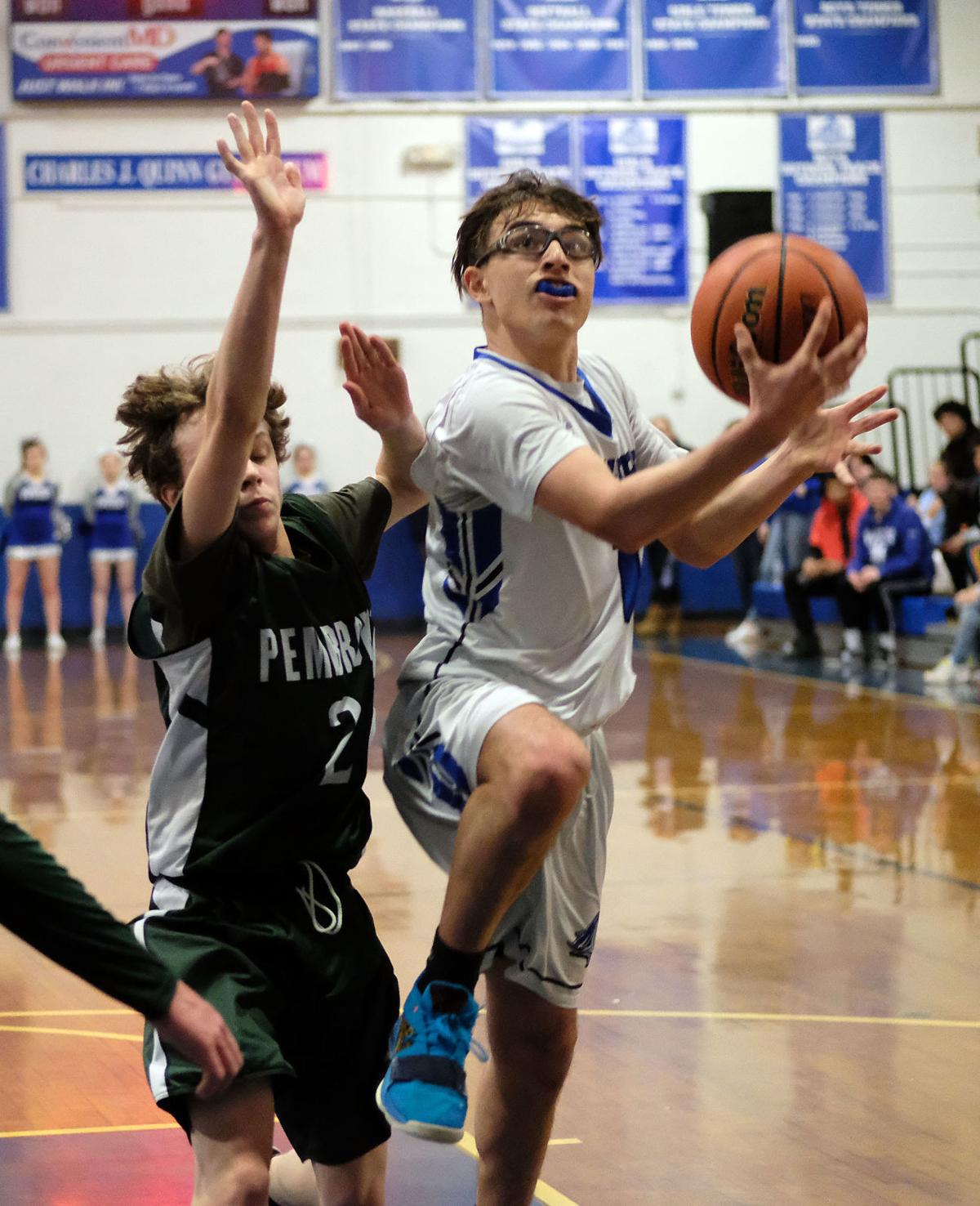 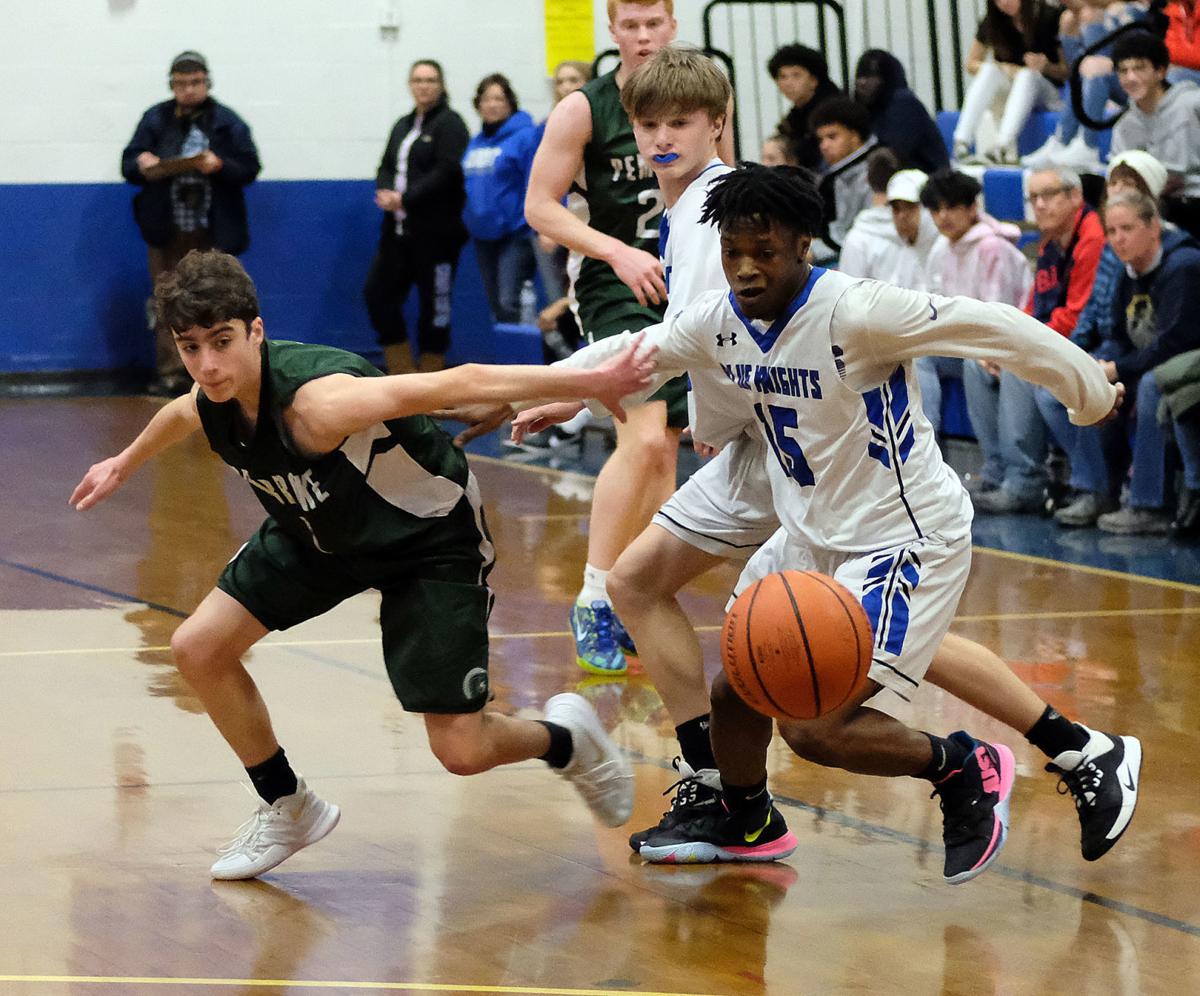 Pembroke Academy’s Mike Strazzeri, left, and Manchester West’s Matthew Andries go for a loose ball during the first half of their game at Manchester West High School Thursday. The Blue Knights prevailed, 61-48. 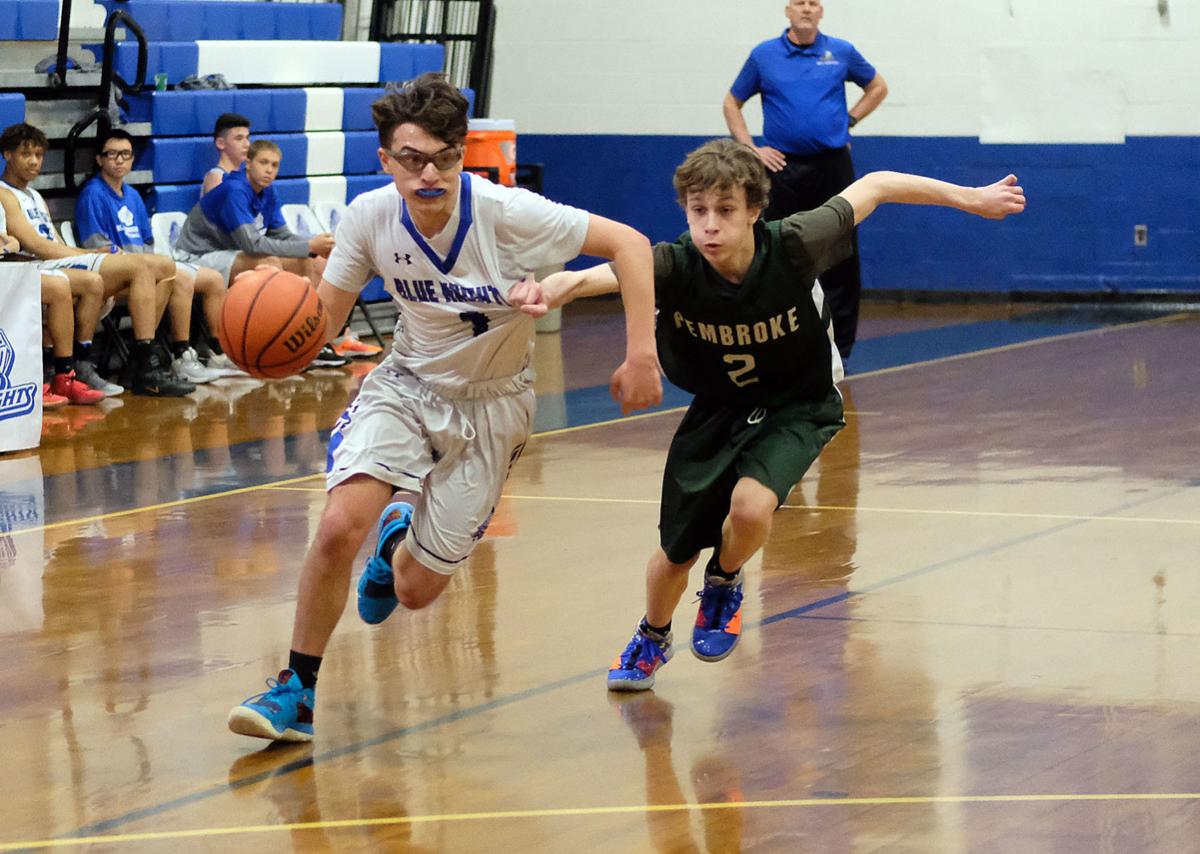 Manchester West's Carson Filardo, left, tries to get by Pembroke's Jacob Boisvert during the first half of their gsame at Manchester West High School Thursday. 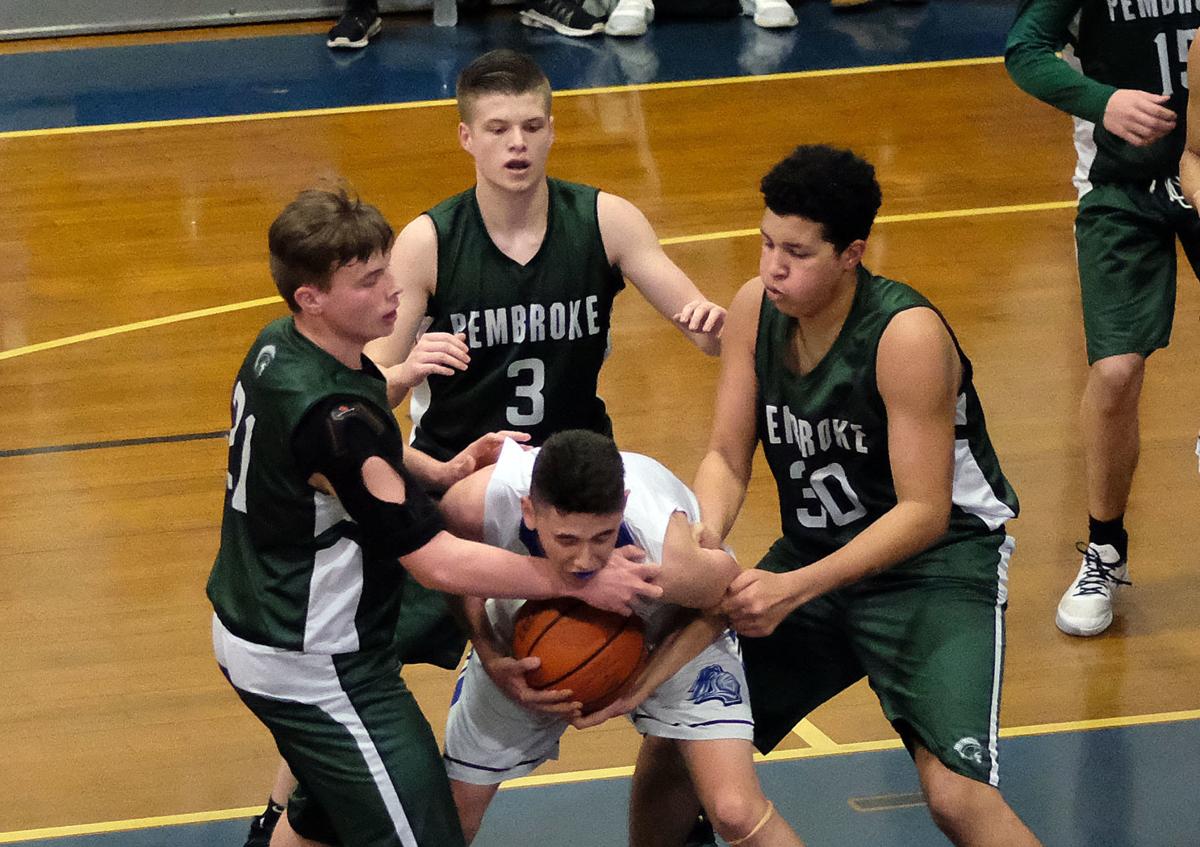 Manchester West's Josh Rose, center, is surrounded by Pembroke Academy's Alex Francouer, left, Preston Wallis, behind, and Shondell Hadley, right, during the first half of their game at Manchester West High School Thursday. 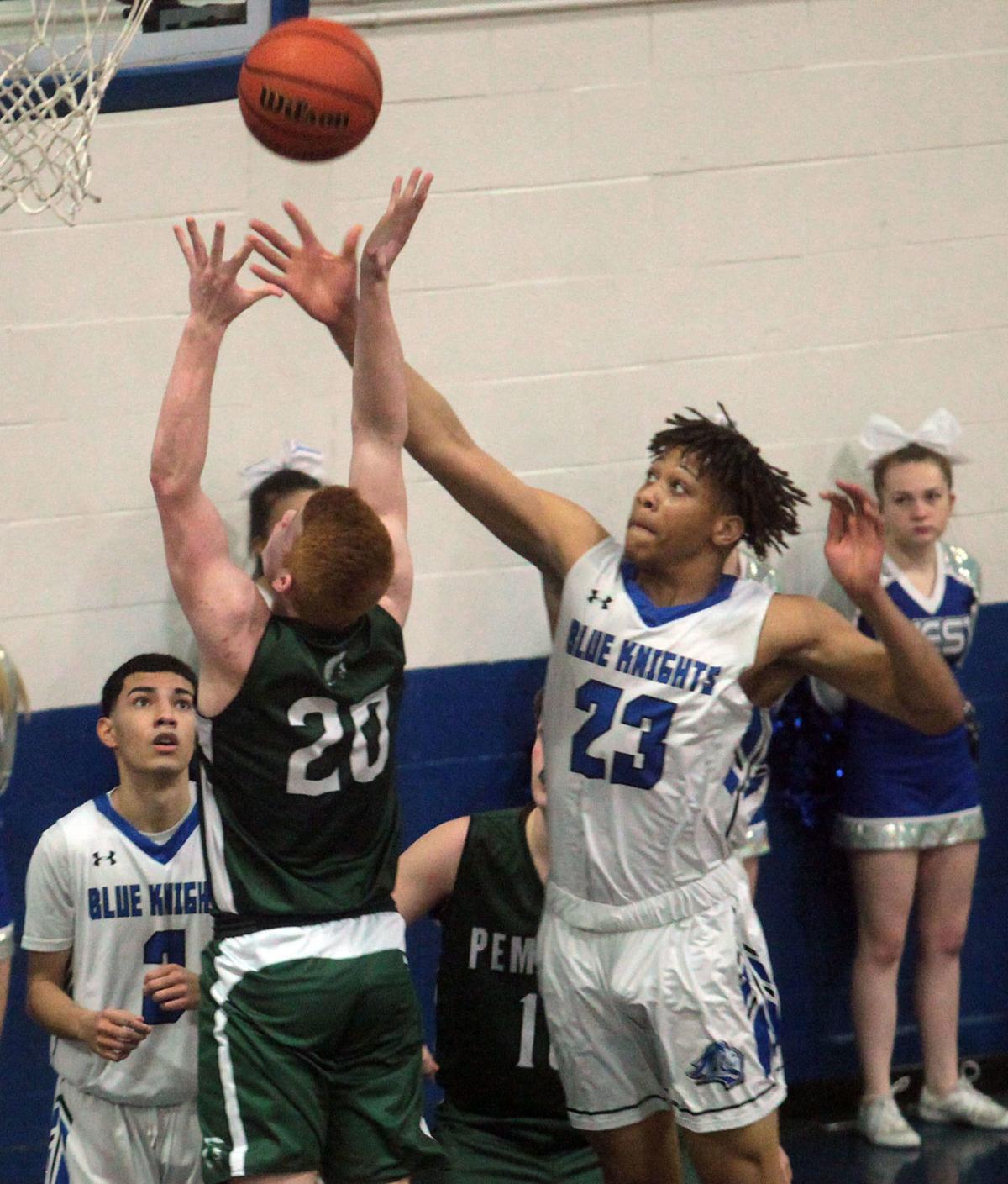 Pembroke Academy’s Mike Strazzeri, left, and Manchester West’s Matthew Andries go for a loose ball during the first half of their game at Manchester West High School Thursday. The Blue Knights prevailed, 61-48.

Manchester West's Carson Filardo, left, tries to get by Pembroke's Jacob Boisvert during the first half of their gsame at Manchester West High School Thursday.

Manchester West's Josh Rose, center, is surrounded by Pembroke Academy's Alex Francouer, left, Preston Wallis, behind, and Shondell Hadley, right, during the first half of their game at Manchester West High School Thursday.

WITH TONIGHT marking the end of the girls’ Division I and II regular seasons, what better time than now to take an early look at how the playoff picture might shake out?

We already know four-time defending state Division I champ Bishop Guertin (16-1) has the No. 1 seed locked up. Even if they lose to Goffstown tonight and finish tied with Merrimack at 16-2 — and possibly Manchester Memorial should it beat Manchester Central — the Cardinals will sit at the top due to tiebreakers.

“It’s always your goal to have a solid regular season and see if you can get the one seed,” BG coach Brad Kreick said. “You get a few extra days of rest. The one and two seeds get a bye, so it’s nice to have a few extra days to get everybody healthy and focused and things like that.”

That leaves Merrimack and Memorial to jostle for the all-important No. 2 seed.

Though each of the top four seeds have the chance to play at least one home game (Nos. 3 and 4 get a second if they win their preliminary matchup), it’s the bye that Kreick mentioned that can make a huge difference. Memorial holds the tiebreaker due to its win over Merrimack (42-40, Feb. 18) just a week ago. That means all the Crusaders have to do is take care of business against Central and the No. 2 seed is theirs, putting them in the scenario they’re aiming for.

Should they lose and Bedford wins against Winnacunnet, the Crusaders would fall down to the No. 4 seed since the Bulldogs have the tiebreaker. That’s something that head coach Greg Cotreau would take issue with seeing as his team’s goal is to meet BG in the final and no earlier.

If both won their early-round matchups, the fourth seed would set them up to play BG in the semifinals, which is what happened last year when BG beat Memorial 66-36 on its way to a fourth straight title. If Memorial gets the Nos. 2 or 3, there’s no way they meet until the final.

“If we get the two seed, it’s great,” Cotreau said. “If we end up with the three seed, that’s OK, too. I think our number one goal was to try to avoid BG until a possible final. I think we’ve accomplished that one goal that we’ve set out to start with. Obviously we have other goals besides BG that we’re trying to achieve, but avoiding BG until a possible final is up there.”

Memorial’s goal shouldn’t be mistaken as fear. The Crusaders played BG tough in the first half of their only meeting this season. It just makes most sense to want to wait to see the Cardinals.

The combinations are seemingly endless with how this could shake out so we won’t get too deep into that. One thing’s for sure: Kreick will have his team ready to go, no matter who the Cards draw.

“Of the five teams that are in that five to nine range, we’ve played three of them,” Kreick said. “Goffstown, Pinkerton and Central. We will not have played Salem or Concord. Fortunately in the age of technology we have film on all of them, even the ones that we haven’t played so far. We have two or three game films on each. Hopefully we’ll get the bye that we’re looking for and we’ll have an opportunity to get eyeballs on the 8 and 9 game. We’ll be aware of that game and be up close and personal and we’ll be able to assess the winner of that game.”

Like Division I, Division II already has its No. 1 seed locked in with Hanover at 17-0. The Marauders play Pelham tonight to determine if they finish the regular season undefeated. The outcome, though, has no effect on their place in the tournament.

The No. 2 seed is Hollis/Brookline’s to lose. At 15-2, the Cavaliers are ahead of Spaulding (15-3) and Lebanon (14-3) entering tonight’s games. Hollis/Brookline possesses the tiebreaker over Lebanon (70-63, Jan. 8) so it doesn’t have to worry about the Raiders jumping by them.

A win against 3-14 Timberlane would seal the deal for the Cavaliers as second in the order.

Similar to Division I, a bunch of good teams are stacked up in the middle as potential opponents for Hanover and Hollis/Brookline in the quarterfinals. Bishop Brady is currently No. 7 at 12-6 with Bow and Pelham behind it at 11-6. Coe-Brown is currently No. 10 at 10-7, but a loss to Sanborn could slip them down to Nos. 11 or 12 with Merrimack Valley and Sanborn on their tail.

Said Hollis/Brookline coach Bob Murphy: “To get all the way through (the tournament) is going to be tough. I’ve seen it before where people come out of nowhere and all of a sudden they’re in the semifinals.”

It’s hard to deny the depth of Division II this season as far as programs that could make a run.

Division II will have 16 teams qualify for the tournament. All others qualify 14 teams.

Senior leader Erin Carney was a sophomore then, so losing to Franklin (Mass.) 47-46 last week was certainly a new feeling for her and her classmates. BG had a chance to win the game at the horn but came up empty on the game-winning attempt that would’ve kept the streak alive.

“(The loss) certainly did not go down well with our kids,” Kreick said. “It was a very quiet bus ride home and a very focused two or three days of practice heading into the Portsmouth game. The kids were ready to go against Portsmouth. It’s actually nice to see the way they bounced back. If anything, it has certainly gotten them a little more focused and ready for the stretch run.”

As if the Cardinals needed any additional motivation going into the tournament.

The NHIAA will have a tournament site for the girls’ Division I and II semifinals and finals set by Monday.

While the location is unclear, Sean Moynihan, chairperson of the NHIAA Basketball Committee, said two weeks ago that they were looking into college sites.

With the quarterfinals scheduled for Wednesday, March 11 (DII) and Thursday, March 12 (DI), it looks like the committee will have this settled just in the nick of time.