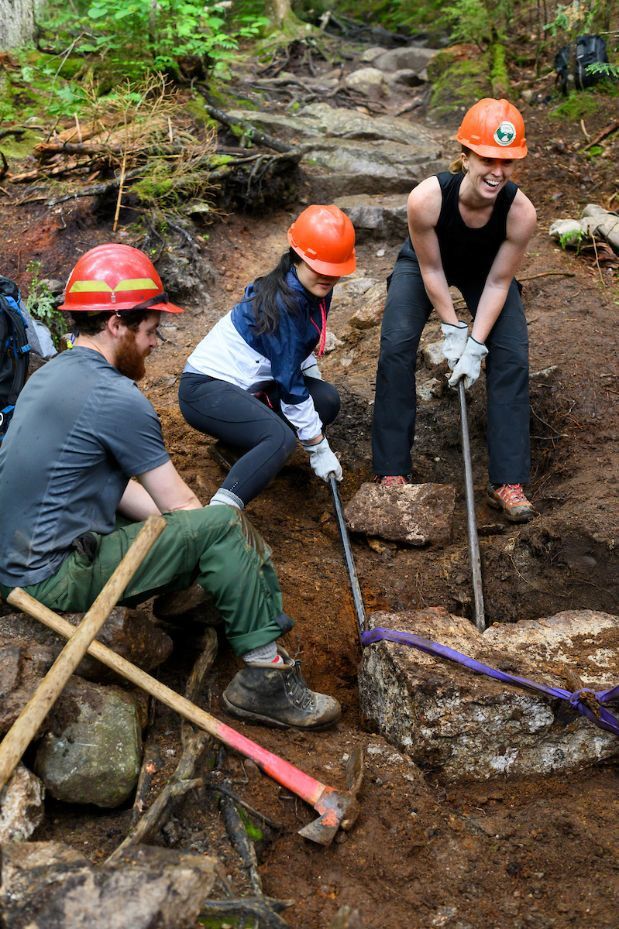 The venerable Crawford Pass hiking trail got an upgrade in 2018 and 2019 through efforts spearheaded by the White Mountains Trail Collective. 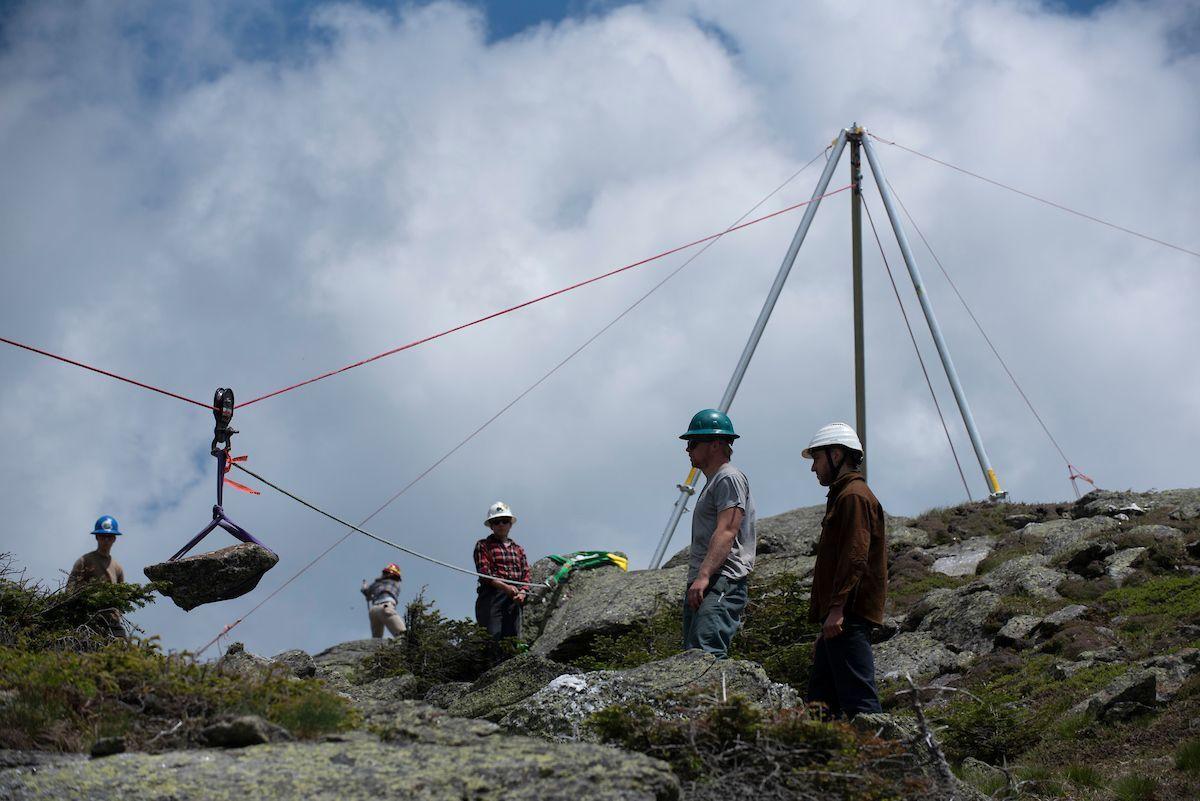 Workers move stone in the restoration of Crawford Path, a hiking trail in the White Mountains. 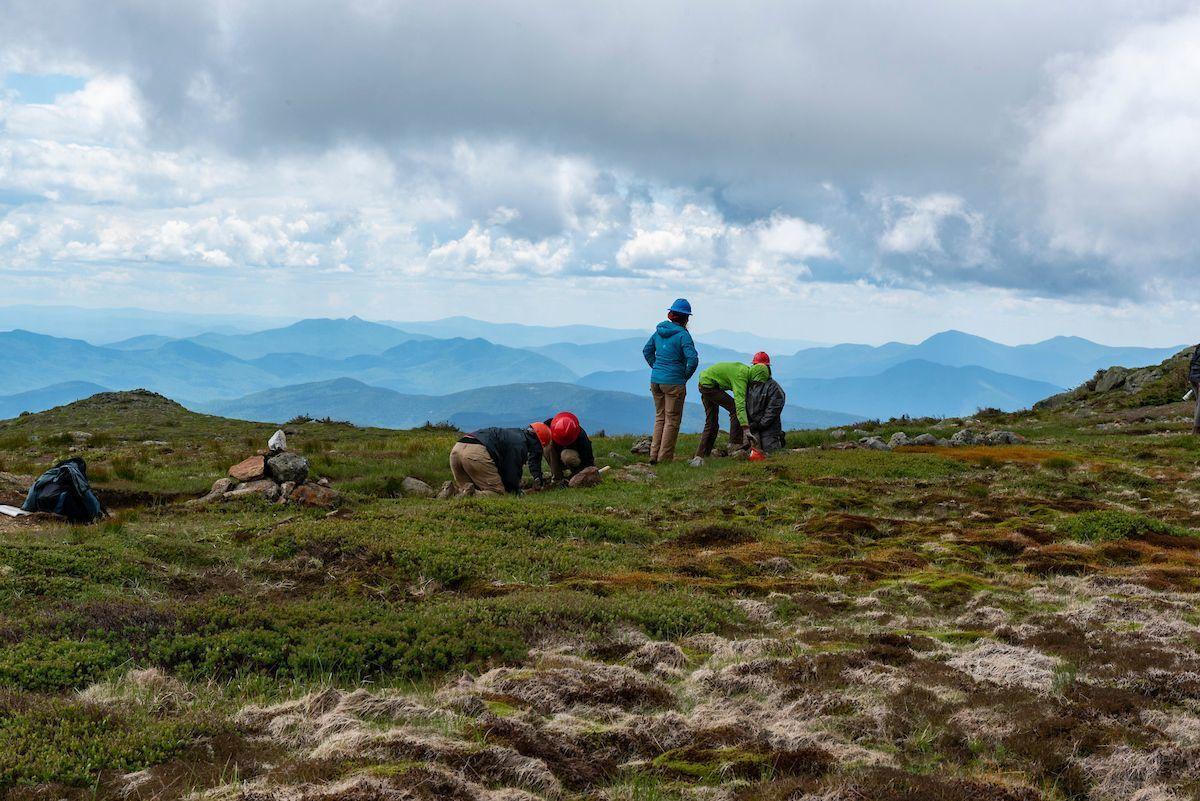 Volunteers and professional trail restorers share a lunch break during the recent restoration of the Crawford Path hiking trail by the White Mountains Trail Collective.

The venerable Crawford Pass hiking trail got an upgrade in 2018 and 2019 through efforts spearheaded by the White Mountains Trail Collective.

Workers move stone in the restoration of Crawford Path, a hiking trail in the White Mountains.

Volunteers and professional trail restorers share a lunch break during the recent restoration of the Crawford Path hiking trail by the White Mountains Trail Collective.

MELANIE “MEL” LUCE is seldom fazed by the scope of the projects she coordinates to keep New Hampshire’s mountain trails hike-able and bike-able. But even she was overwhelmed when she recently visited a work site for one of the White Mountain Trail Collective’s initiatives.

“They are building a big granite staircase, with 300 steps, and they’re harvesting the granite from the local area,” she recalled. “The sheer scale of the project — it’s overwhelming. I was there (recently) and I said, ‘We’re going to finish this, right?’”

Thinking big has always characterized activity in the Whites, and it’s especially true of the Trail Collective. The three-year-old group, marking its first year as a nonprofit this summer, coordinates restoration and repair projects on the Whites’ beloved trails, preserving them for yet another generation, and generations to come.

Executive Director Luce said while the group was formed in 2017, it achieved nonprofit status last year. It grew out of an idea from board member Michael Stonebraker, she said. While Stonebraker was hiking the Whites’ 4,000-footers — in his 60s — he noticed a backlog of deferred maintenance. He went to the U.S. Forest Service, who told him they didn’t have the capacity, volunteers or funds to tackle these projects. After a few more dead ends, Stonebraker found a few more like-minded people, and the Collective was birthed.

Luce explained that the Collective adds “capacity” to the trails in the system. The old-school term is “umbrella organization,” the modern term is “Collective Impact Nonprofit Organization.” By banding together in a collective, the trails are able to access volunteers, professional administration, data bases and funding.

According to their website, the Collective’s resources include streamlining internal communications, establishing external communications to raise public awareness, managing data entry and administration, and providing data necessary to make intelligent and effective adjustments.

The Collective works on projects that are submitted to them, prioritizing the need. They are currently finishing up a two-year project restoring the trail at Crawford Pass, which was 200 years old in 2019. “It is the oldest maintained trail in the country,” Luce said.

Restoring the 8.5-mile trail took 15,000 hours in field work over 2018 and 2019, and included the trail’s own crew, adult volunteers, WMTC staff and youth volunteers. The cost was $350,000, and, Luce explained, “We get creative when it comes to funding.” Major funding for Crawford Pass came from the National Forest Foundation and outdoor retailer REI Coop.

Projects are accepted by application, from any of the White Mountains’ 1,200 miles of trails, and the Collective groups them by area. Currently they’re working in the Mount Washington Valley and have four scheduled projects:

1. Glen Ellis Falls on the Ellis River. Glen Ellis Falls was built by the Civilian Conservation Corps back in the Great Depression, and hasn’t had any upgrades in 50 years, according to Luce. The restoration will be in the original style of the CCC work. The Collective will bring in a national organization, HistoriCorps, to train the regular staff and volunteers. There will also be a new handicapped-accessible trail to the lookout, she said.

2. Cathedral Ledge, an “iconic” destination in the Mount Washington Valley. This project will address deteriorating wooden structures and soil erosion, and will require highline rigging, stone splitting and shaping, and dry-stack stonework skills. Cathedral Ledge will be the home of the granite staircase, she said.

3. The Cranmore Connector. This is a hiking trail in North Conway near Cranmore Mountain, used by both hikers and mountain bikers. It’s heavily used by families, and when the mountain bikers come down the trail, they tend to ride fast. “It’s a safety issue,” Luce pointed out. The project will build a new trail parallel to the original trail, so both hikers and bikers can enjoy a day in the hills.

Lots of work to be done

The Collective partners with nine organizations to accomplish its work, and Luce sees three common threads among them. There are funding issues, she said, pointing out that of parking fees, park passes and tax dollars, “very little goes to the trails.” The 1,200 miles of White Mountain trails have a combined $35 million “deficit” in the work that needs to be done. There’s been an increased use of trails due to COVID 19 and people’s need to get out, and also from the “mysterious weather events” of the past decade.

Though the trails were clogged this spring with people fleeing COVID 19, Luce urges hikers and bikers to wait a few months, noting that spring use is especially rough on trails.

The organizations also have a volunteer base that is “aging out,” according to Luce. She’d like to see more younger people volunteer. “They love to take selfies on the top of a mountain, but there’s sometimes a disconnect as to how that mountain is maintained,” she observed.

Rounding up volunteers goes hand-in-hand with education, she said, and the general public needs to be educated on the need for preserving these White Mountain gems.

“No club or organization,” she said, “could accomplish this on their own.”