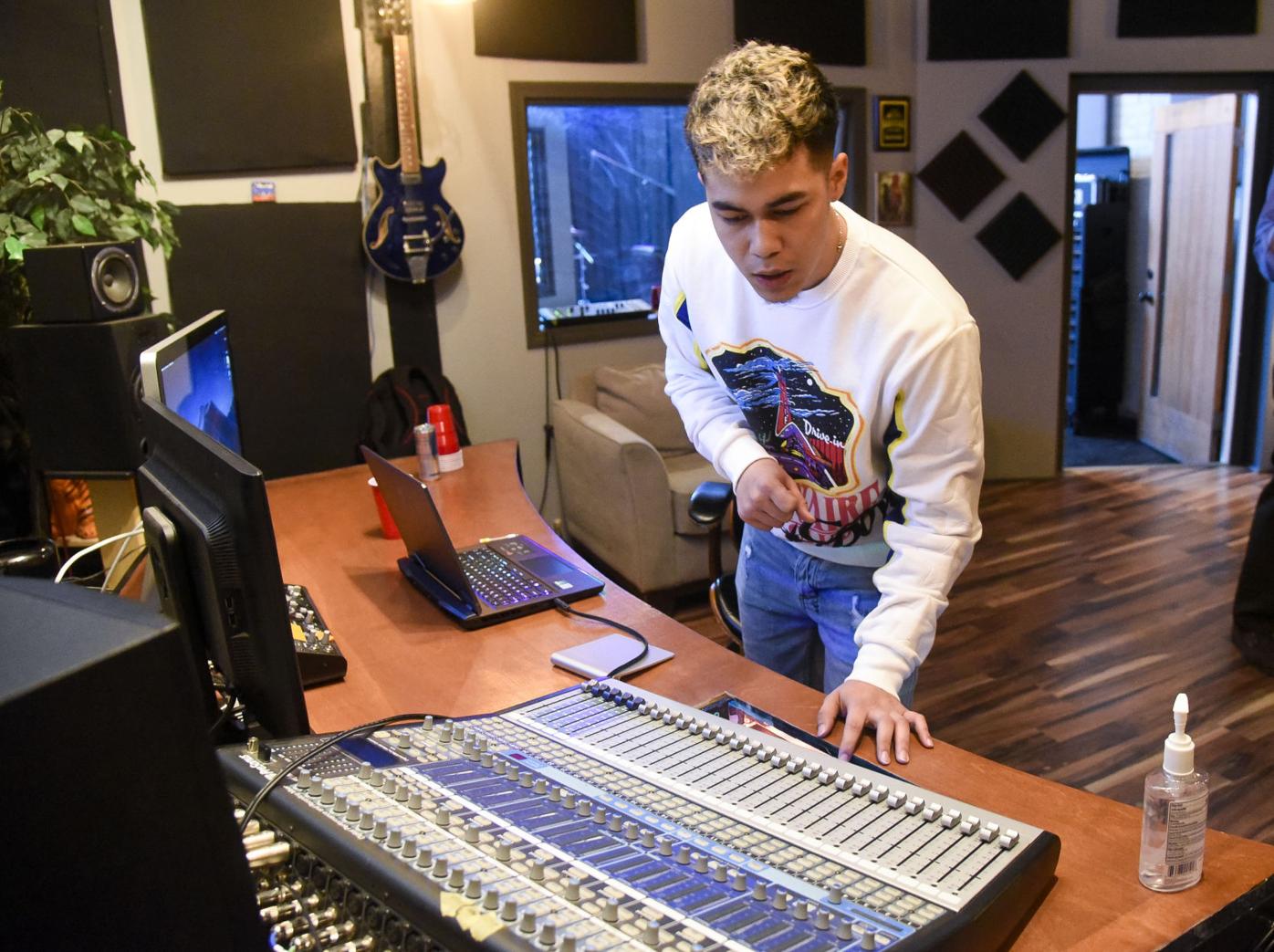 Xavier Barrios, 20, talks about his life and early success in the music industry while in Manchester last week. 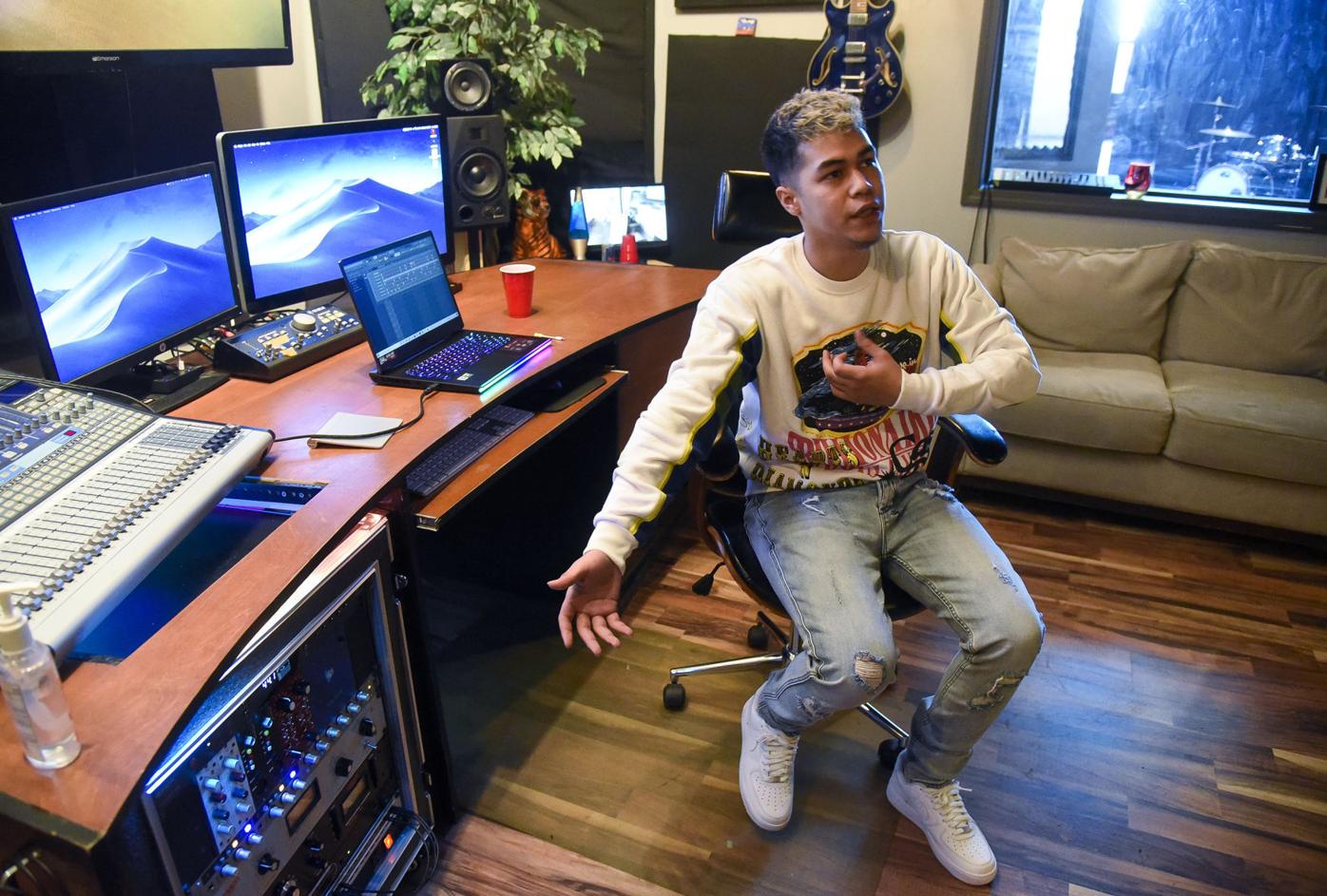 Music producer Xavier Barrios, originally from Manchester, talks about his life and early success in the music industry while in Manchester on Wednesday. 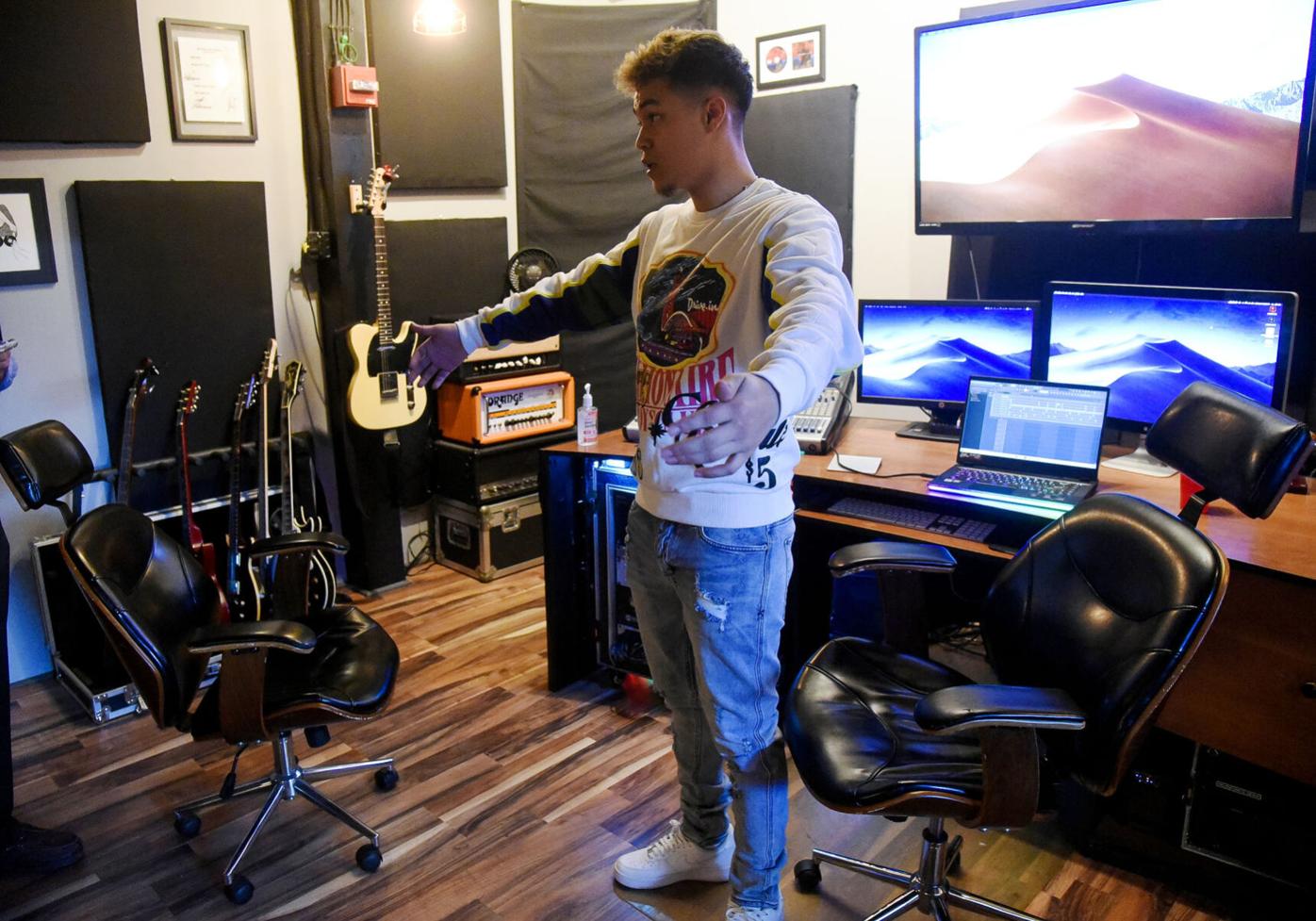 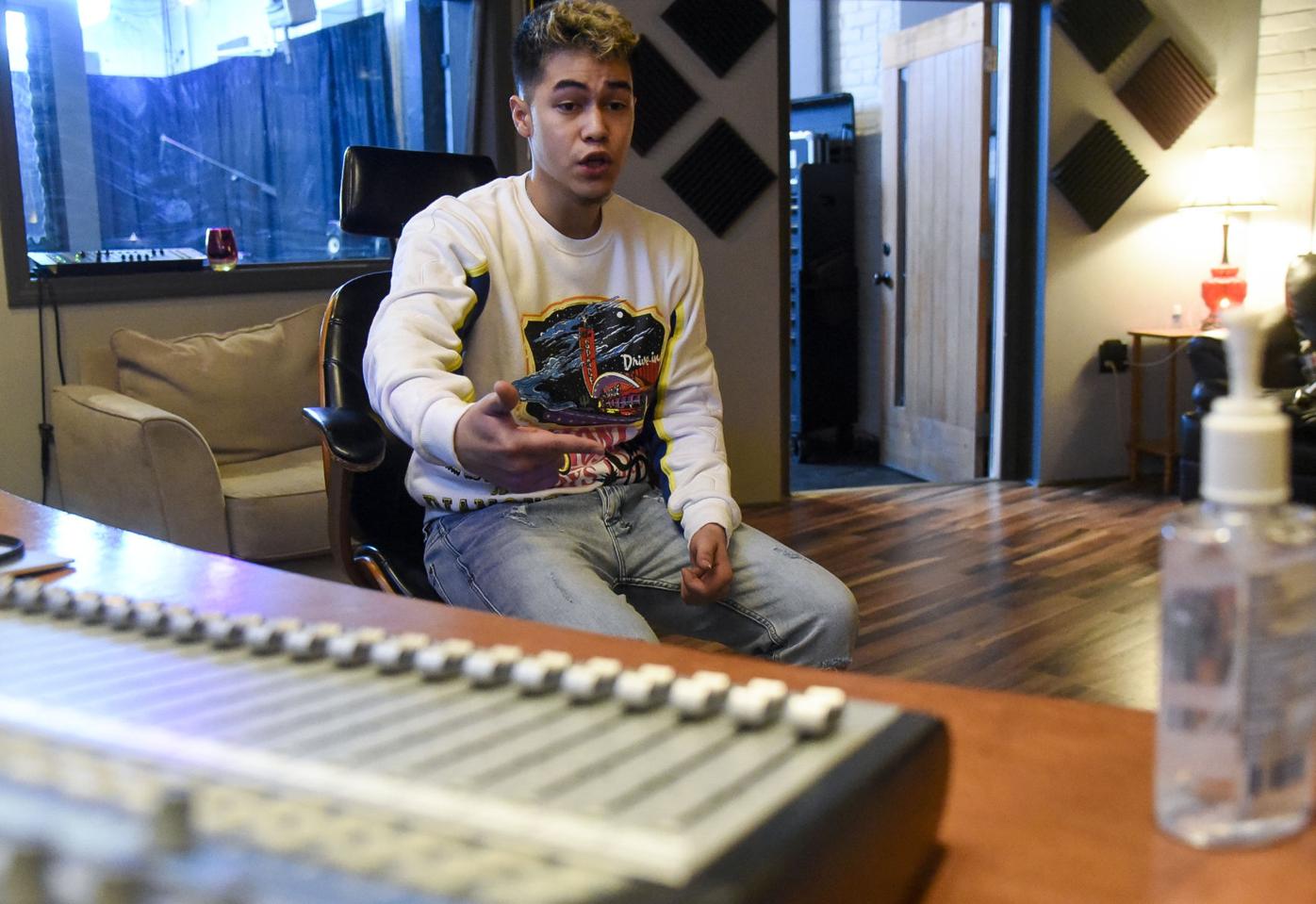 Xavier Barrios, 20, gestures toward his console as he talks about his life and early success in the music industry while in Manchester last week.

Xavier Barrios, 20, talks about his life and early success in the music industry while in Manchester last week.

Music producer Xavier Barrios, originally from Manchester, talks about his life and early success in the music industry while in Manchester on Wednesday.

Xavier Barrios, 20, gestures toward his console as he talks about his life and early success in the music industry while in Manchester last week.

MOVIES ABOUT THE LIFE of any rock-n-roll star start the same way.

A rebellious kid saves up money from his 1) paper route 2) farm chores 3) Christmas. He buys a guitar at the local Woolworths, overcomes personal hardships, teaches himself three chords and becomes a headliner before he is old enough to legally drink.

It’s hard for that to happen in the rock ‘n’ roll world today, mostly because, to update a Neil Young line: Hey hey, my my. Rock ‘n’ roll has kinda died.

But we will always have the archetype of innocent talent rocketing to success. Such is the story of Xavier Barrios, who is now 20, and grew up on the rough side of Manchester.

As a teenager, Barrios got into scrapes with the system and landed at Webster House. A sympathetic friend bought him a pair of Air Jordan 10s. He thanked his friend, never took them out of the box, returned them and used the $150 to purchase a Fruity Loops Studio software package.

Fifteen at the time, Barrios loaded the software onto an old HP laptop. And he started producing beats, the audio files that combine rhythm, percussion and digitized instrumentation to form the bedrock of much of modern music, especially hip hop.

Five years later, Barrios has an apartment in the Sherman Oaks section of Los Angeles. He drives a pricey sports car and goes by the moniker Project X.

At 20, this former Beech Street School kid with Panamanian roots has produced beats such as Zoey Dollaz’ “Work 2 Hard,” Wiz Khalifa’s “Dreams,” and “Gucci Bucket Hat,” a collaboration of Pap Chanel, Future and Herion Young that has logged 6.5 million streams on Spotify.

“It’s not necessarily the beats that make him stand out, it’s just him,” said Aidan Elias, owner of Manchester-based Rerouted Music, which provides artist development and public relations throughout New England.

Anyone can produce a beat, Elias said, but in today’s music world, a producer has to cultivate friendship and respect in the industry.

“He (Barrios) has extreme credibility, and a lot of people behind his name and his brand,” Elias said.

Elias was on hand last week when Barrios visited Manchester and held a coaching and feedback session for neophyte producers and artists. No one anywhere offers such a program live, and Barrios is building a network of emerging talent, Elias said.

The session took place at a recording studio in an Auburn Street mill building. In an appropriate depiction of modern music, Barrios’ laptop sat front and center on the studio work bench; electric guitars and a drum were sidelined to a corner.

“LA’s really the best place for me,” said Barrios in a deep, confident voice that could voice its own raps.

Studios are everywhere, and he’s a telephone call away if needed to work on a track. He works for Mafia 808, one of the top hip-hop production companies in the country.

Sure, Barrios said, he could delve into the debauchery highlighted in LA hip-hop videos. But the depictions are exaggerations, he said, and he prefers to concentrate on work, spending as much as 12 hours in the studio.

He relishes the story of his first Fruity Loops software. He had been smoking weed and got into enough trouble that he landed at Webster House.

The children’s home allowed no electronics, so he studied the software manual during the week. On weekend furloughs, he returned home and created beats.

Eventually, his father, who owns a small janitorial company, told Barrios that school might not work out, but if he dropped out he had to devote his energy to music.

Barrios dropped out for a time, but eventually returned to school.

In class, Barrios talked about producing beats, and his work ethic propelled him into prominence, she said.

In the end, Barrios was the only one of his close friends to graduate.

Barrios keeps his beats simple, he said. For example, he sticks to the common, 4/4 time signature, praising its foundational nature. Second, a beat has to mean something.

“You should be creating emotion. If a beat’s not going to have emotion, it’s not a piece of music,” he said.

Once he graduated, Barrios started sending sample beats to artists and production companies. Barrios said he offered $500 to Guap Tarantino to try one of his beats (a common practice, Barrios tells me).

When working with Tarantino in a Miami studio, he met Zoey Dollaz. They hit it off, and Barrios landed his first beat on a track, Dollaz’ “Work 2 Hard.” Shortly after the song’s release, Barrios visited a Miami nightclub and people knew the lyrics and were rapping to the song, he said.

Last summer, he moved to LA. His beats anchor about 10 songs that are available on digital platforms such as Spotify, he said.

Every couple of months, he returns to Manchester to visit relatives and host his coaching sessions.

He said he said he’d eventually like to give motivational talks here. “I want to be the person who shows the kids this is possible,” he said, “our location, it has nothing to do with what you want to accomplish.”

So is he a millionaire at 20? His bank accounts say no, Barrios said. But he added: “Ask me in a year.”