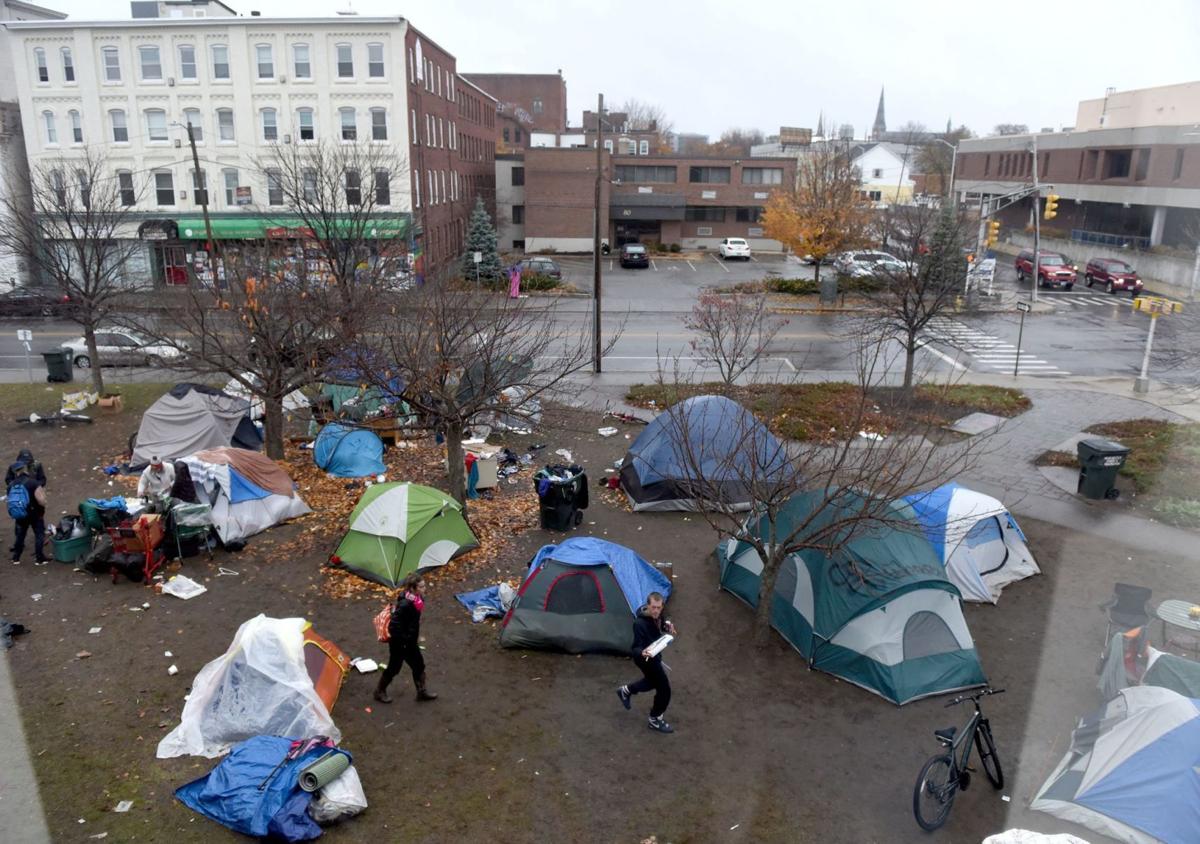 The state has set a deadline for Monday for homeless to move off the lawn of the Hillsborough County Superior Court on Chestnut Street in Manchester. 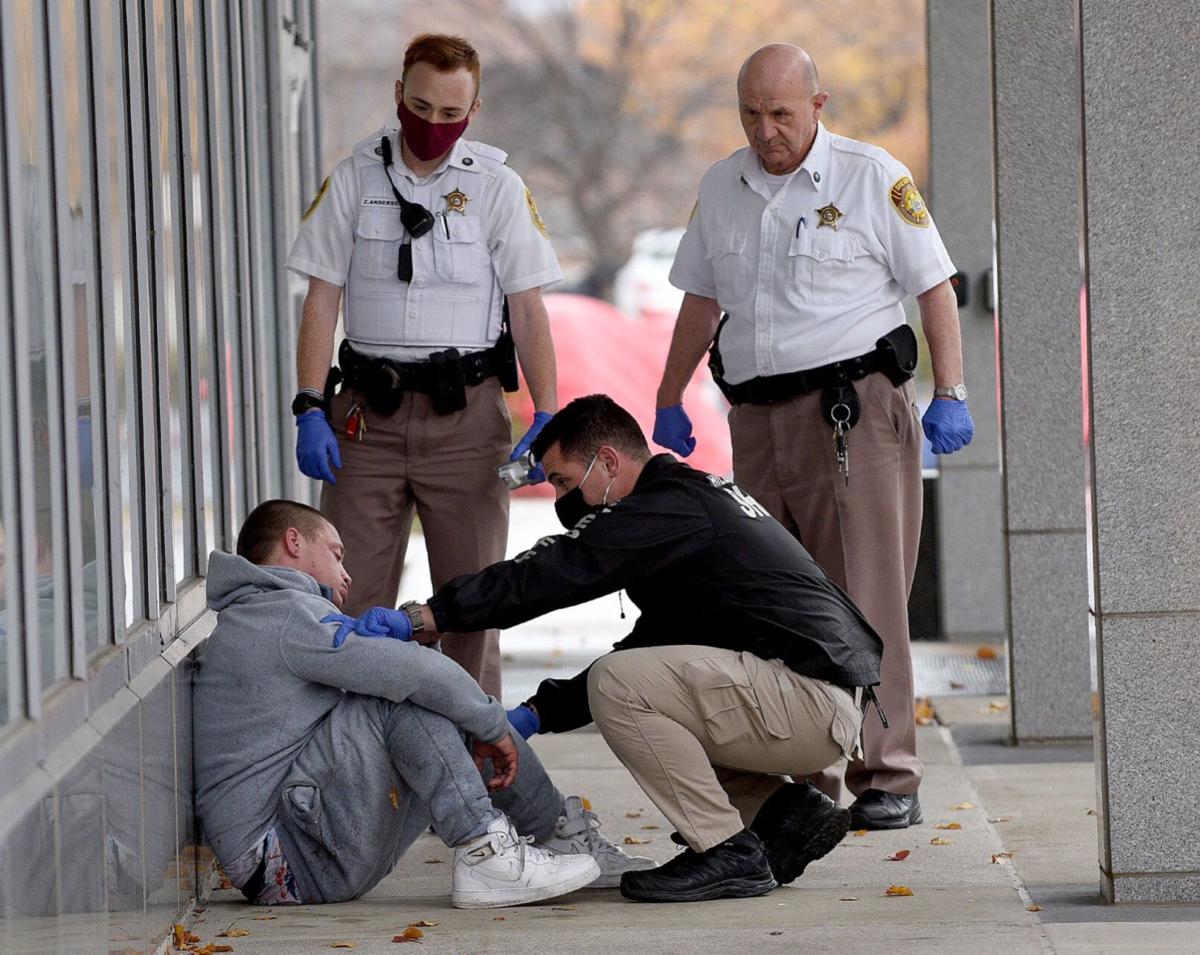 Court officers assist a man having a medical issue outside Hillsborough County Superior Court near the homeless camp on its lawn in Manchester on Friday.

The state has set a deadline for Monday for homeless to move off the lawn of the Hillsborough County Superior Court on Chestnut Street in Manchester.

Court officers assist a man having a medical issue outside Hillsborough County Superior Court near the homeless camp on its lawn in Manchester on Friday.

Eviction day for homeless people who had expected state government to provide some solid ground beneath them, literally, as they faced winter’s cold.

But as of today, people who had been camping on the lawn of the Hillsborough County courthouse will be in a freefall. They and their dozens of tents, sleeping bags, bicycles, shopping carts, clothing — I even saw a desk when I visited last week — must be gone, according to a 10-day notice posted Nov. 6.

They face fines if they remain.

The evictions come as the only emergency shelter in the city — Families in Transition’s New Horizons shelter — is at or near its 107-bed capacity most nights.

“What are they going to do, stomp on our tents?” asked Travis Plaster, 24, who said he moved to the camp after he couldn’t afford the $200 weekly charge for a residential drug rehabilitation program.

This is not the first time that cops have broken up homeless camps in the city. But it is the first time since COVID-19 hit. And it is the most prominent camp to ever face evacuation by a crew of law enforcement and sanitation workers.

Because the tents rest on state property, New Hampshire State Police will be in charge of this one.

The process has been a long one.

The first tents went up on the lawn in early summer. On Sept. 30, state officials posted No Camping signs on the property. Officials from several state departments and the Hillsborough County sheriff were working on a plan, they said at the time.

My request to see their plan has been ignored; that’s no surprise since New Hampshire’s 13 mayors two weeks ago faulted the state for having no strategy to address homelessness. So last week Gov. Chris Sununu said the state was working with courthouse camp residents one-on-one to inform them about services and opportunities.

State health officials are working with Manchester community providers to develop plans for each of the campers, echoed Jake Leon, a spokesman for the state Department of Health and Human Services.

“The ultimate goal is to find immediate housing in Manchester or their home community,” Leon wrote. If New Horizons is full, people should call 211 for a spot in other shelters around the state, he wrote.

Granite United Way, which runs 211, said shelters are at capacity around the state with only a few beds available on any night. At times, operators can’t find a bed for people who call, said Patrick Tufts, president of Granite United Way.

And if the estimated 50 courthouse campers call 211 today? “It would overwhelm the entire system (statewide),” Tufts said.

City officials have recently counted 365 homeless people in 56 camps across the city. A pre-COVID-19 census in January put the number at 74.

“It’s a much bigger problem than the courthouse lawn,” said Rik Cornell, a vice president and spokesman for the Mental Health Center of Greater Manchester. “We have a crisis with our homeless problem in Manchester.”

The Mental Health Center is part of an outreach team that visits the camps. Since some of their work is state-funded, Cornell assumes his agency is one of the “community providers” that Leon refers to. But he said his agency can’t provide housing; its workers help people cope mentally with homelessness.

Cornell blames the economic fallout of COVID-19 for the increase in homelessness. Many fear shelters because they have underlying health problems that make them susceptible to the coronavirus, Cornell said.

Fire Chief Dan Goonan believes mental illness is the single biggest problem among the campers, and that is often coupled with drug abuse. He estimates that his crews answer about one overdose a day at the camps.

“I think they are underestimating this population,” said Goonan, who also visits camps regularly. “They need to take a good hard look at this population before they move them.”

The ACLU-New Hampshire is watching the situation closely and believes removing the camp would be cruel and inhumane, Legal Director Gilles Bissonnette said last week.

“While we are not currently in a position to file an immediate lawsuit (last) week, we do not believe that this clearing is constitutional given that shelters are near capacity,” he wrote in an email last Thursday.

Meanwhile, Goonan and city social service agencies are preparing for mid-winter. They are trying to prepare surge locations to house the homeless on cold nights.

The Christian-themed 1269 Cafe will host a 16-bed surge center, but Goonan said that is not enough. A week ago, the city asked state officials if they could use the National Guard Armory on Canal Street.

The state turned the city down, Goonan said.

Plaster and a fellow homeless camper, Troy Nichols, said they like the courthouse site for its convenience. Nearby are a suboxone clinic, a needle exchange, 1269 Cafe, and bathrooms in Veterans Park.

Nichols said the campers have a sense of community.

“They’re not really giving us any options,” Plaster said, “nothing realistic.”

Activists show up at courthouse lawn; State Police a no show

Outreach workers are committed to providing “housing options” for the homeless campers at the Hillsborough County courthouse, a top official i…

Mayor Joyce Craig said the city does not support involuntarily removing the Hillsborough County courthouse to another encampment, while state …