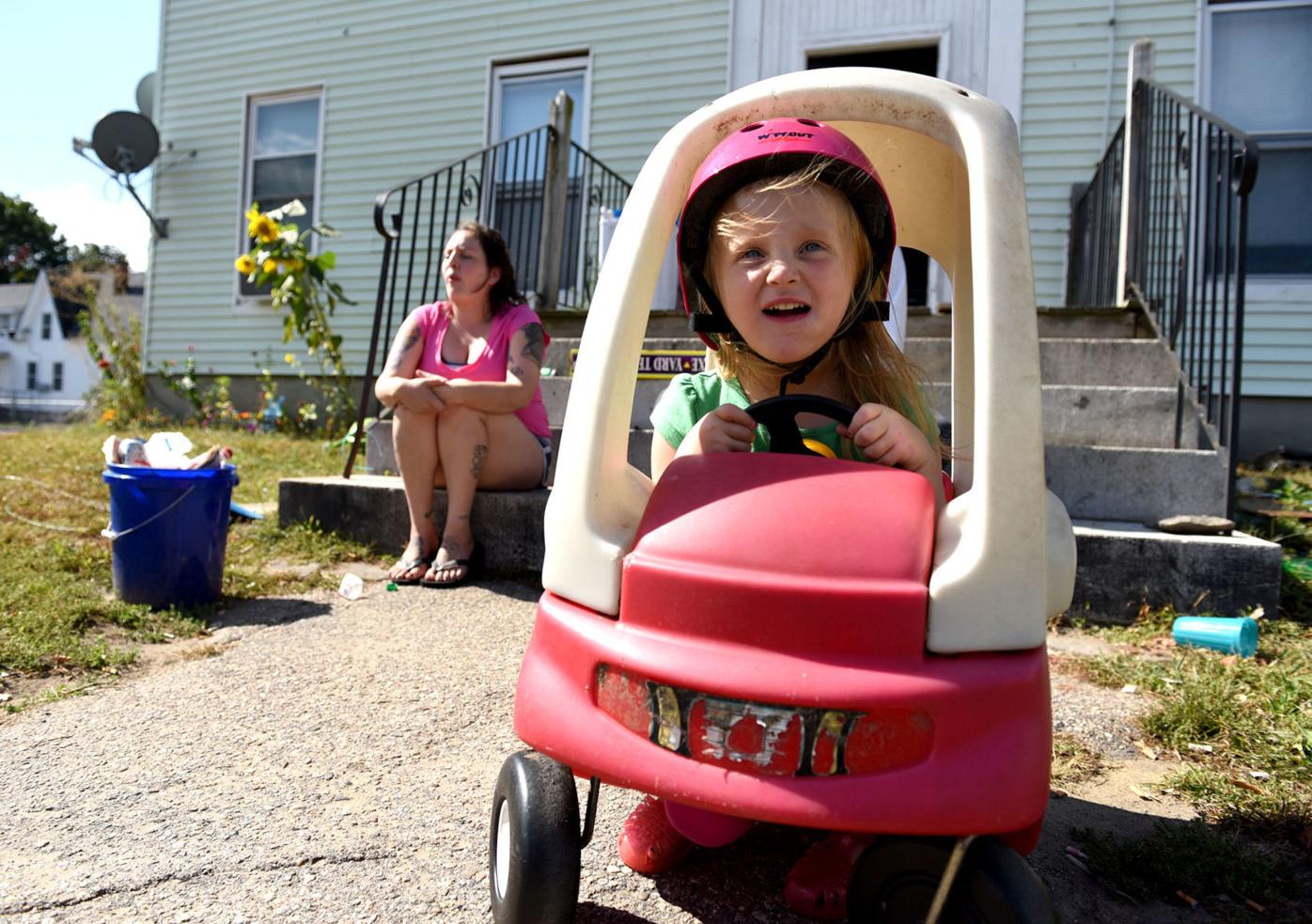 Lisa Dugas of Manchester watches her daughter, Zoey, play in front of her apartment on Beech Street in Manchester on Sept. 26, 2019. 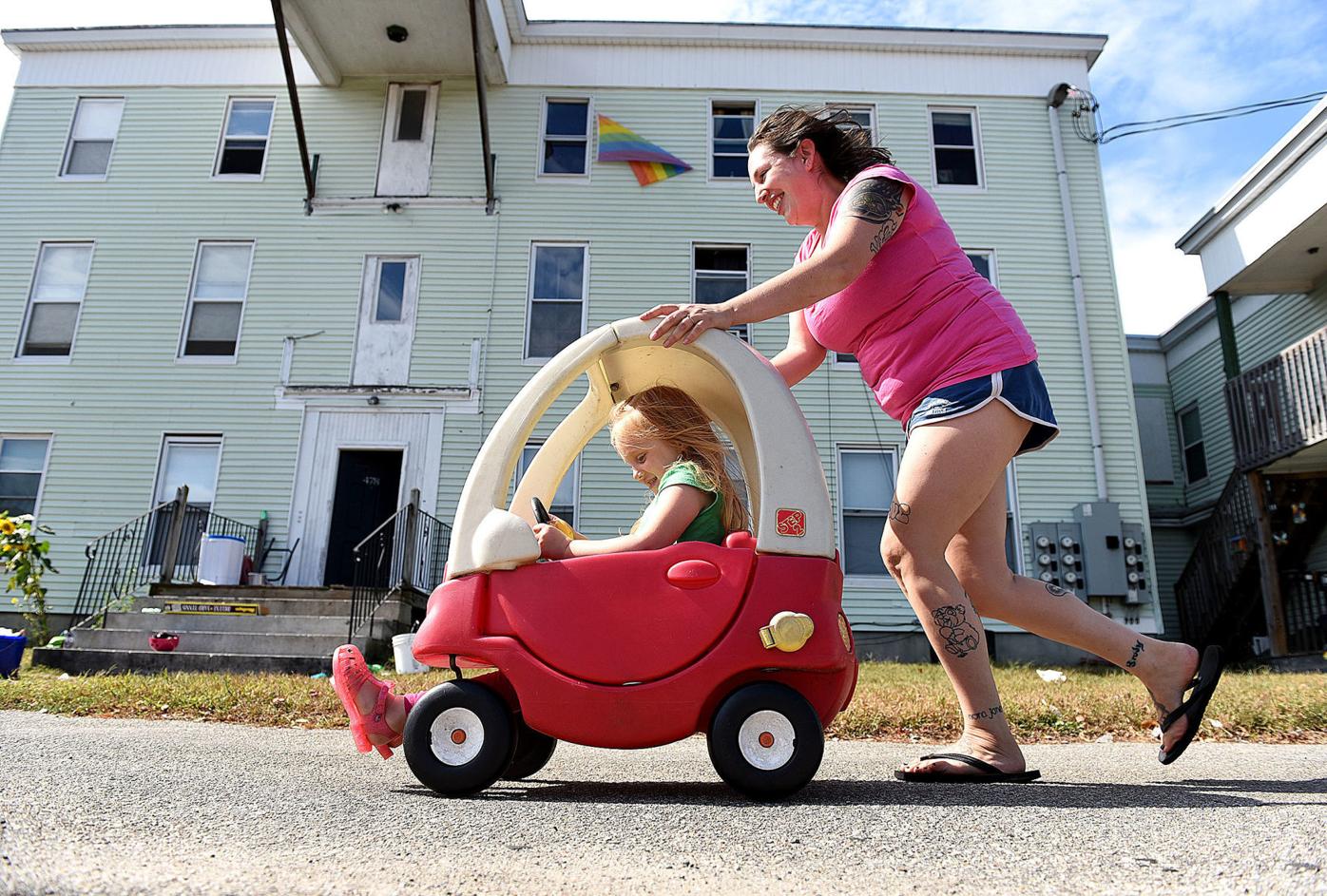 Lisa Dugas of Manchester plays with her daughter, Zoey, in front of her apartment on Beech Street in Manchester recently. 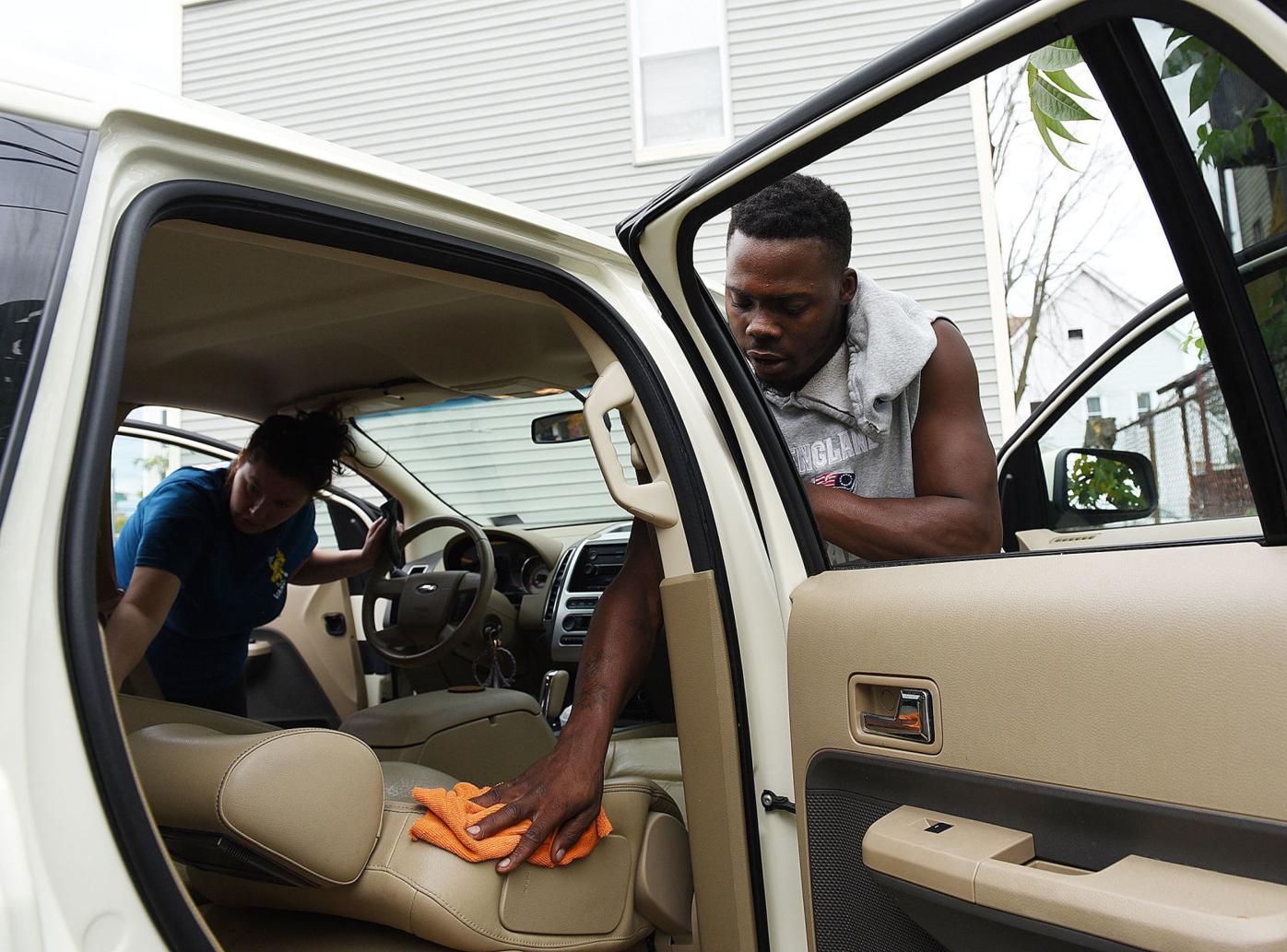 Justin Choice details a client’s car behind his Spruce Street apartment in Manchester. 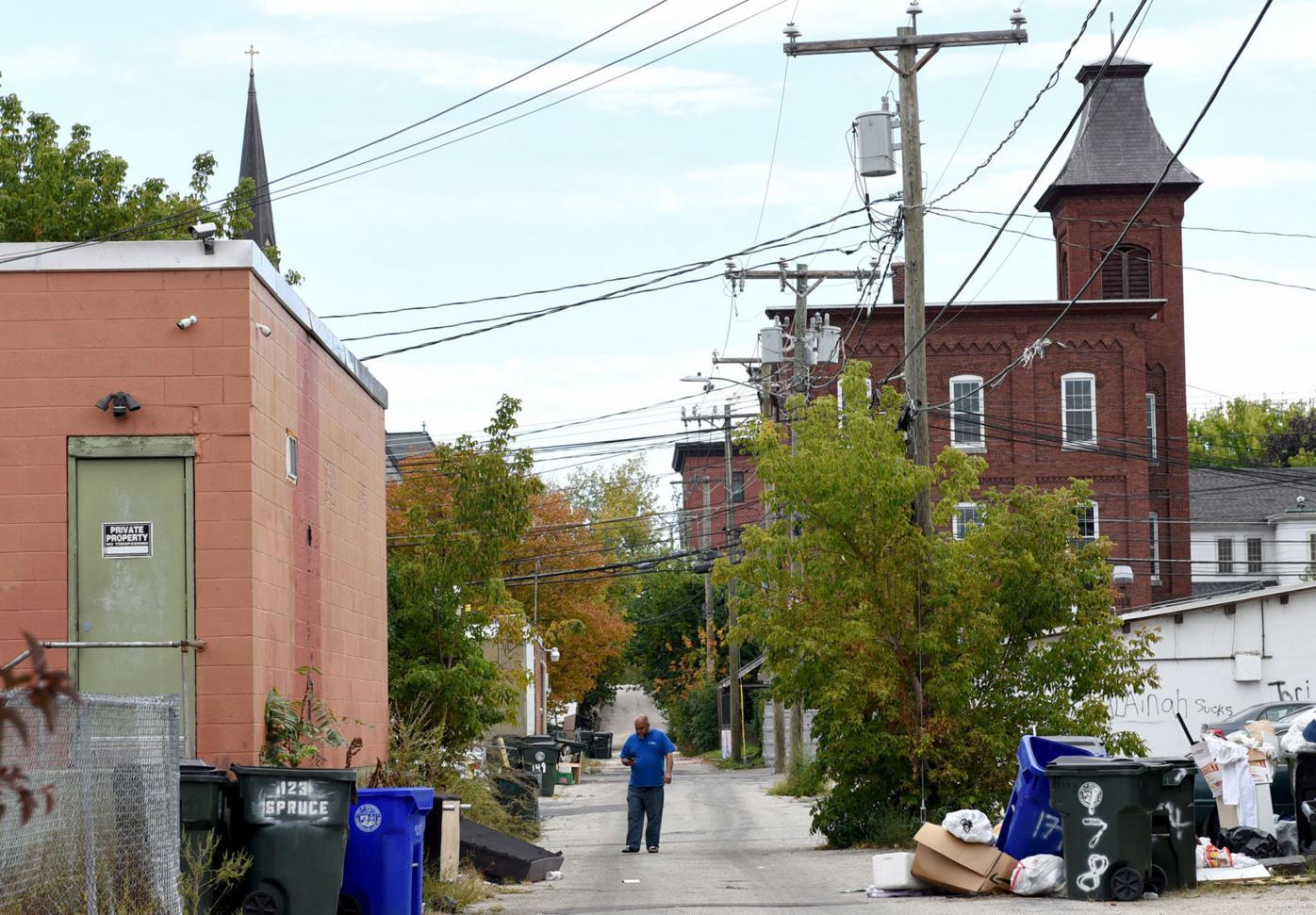 A man walks down an alley between Spruce and Cedar streets in a neighborhood likely to be designated for persistent poverty. 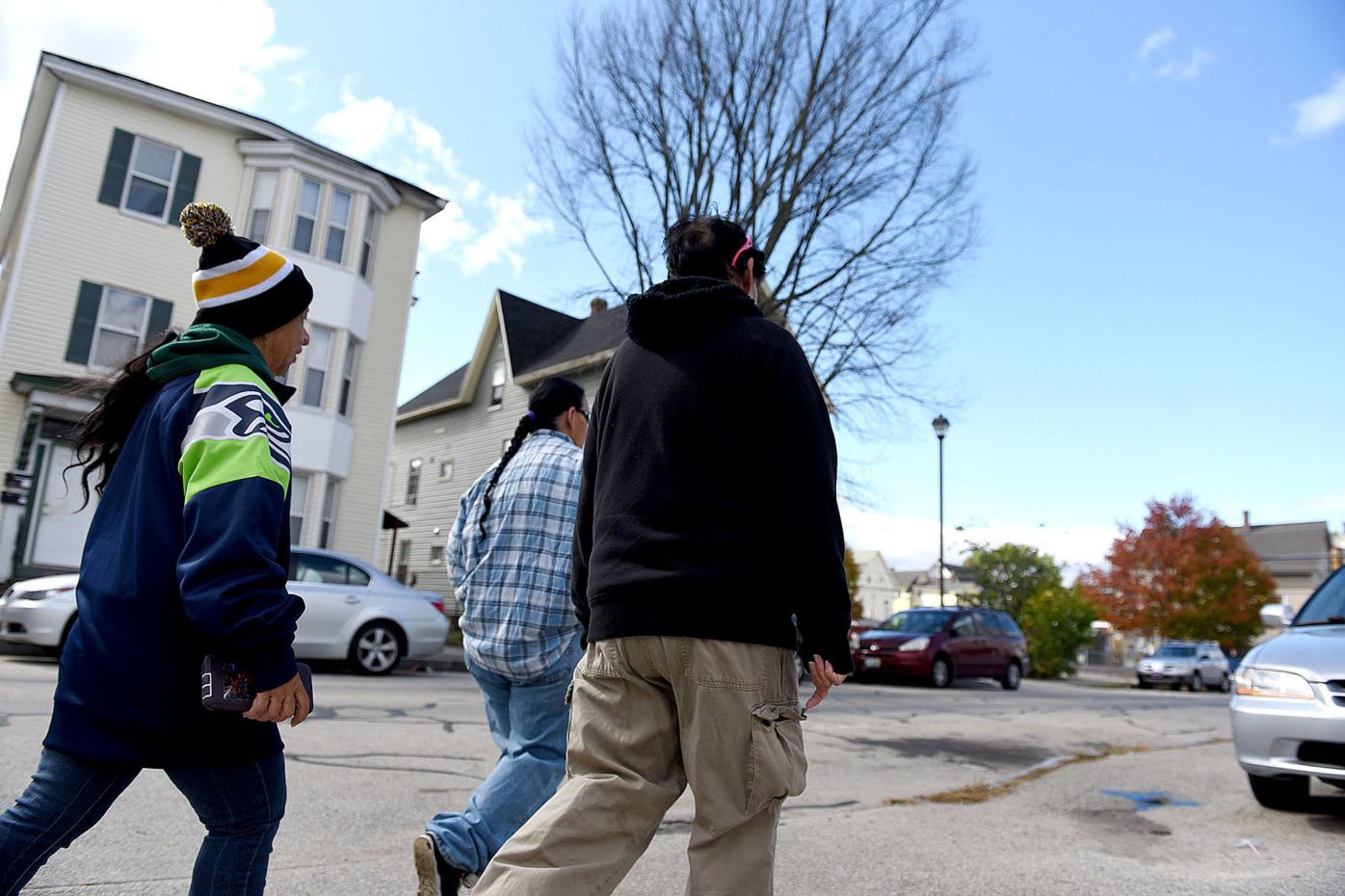 Sisters Lisa O’Dell, left, and Belinda O’Dell and Lenora Gagnon, right, walk down Spruce Street while on their way to pick up their paychecks downtown on Oct. 4, 2019. 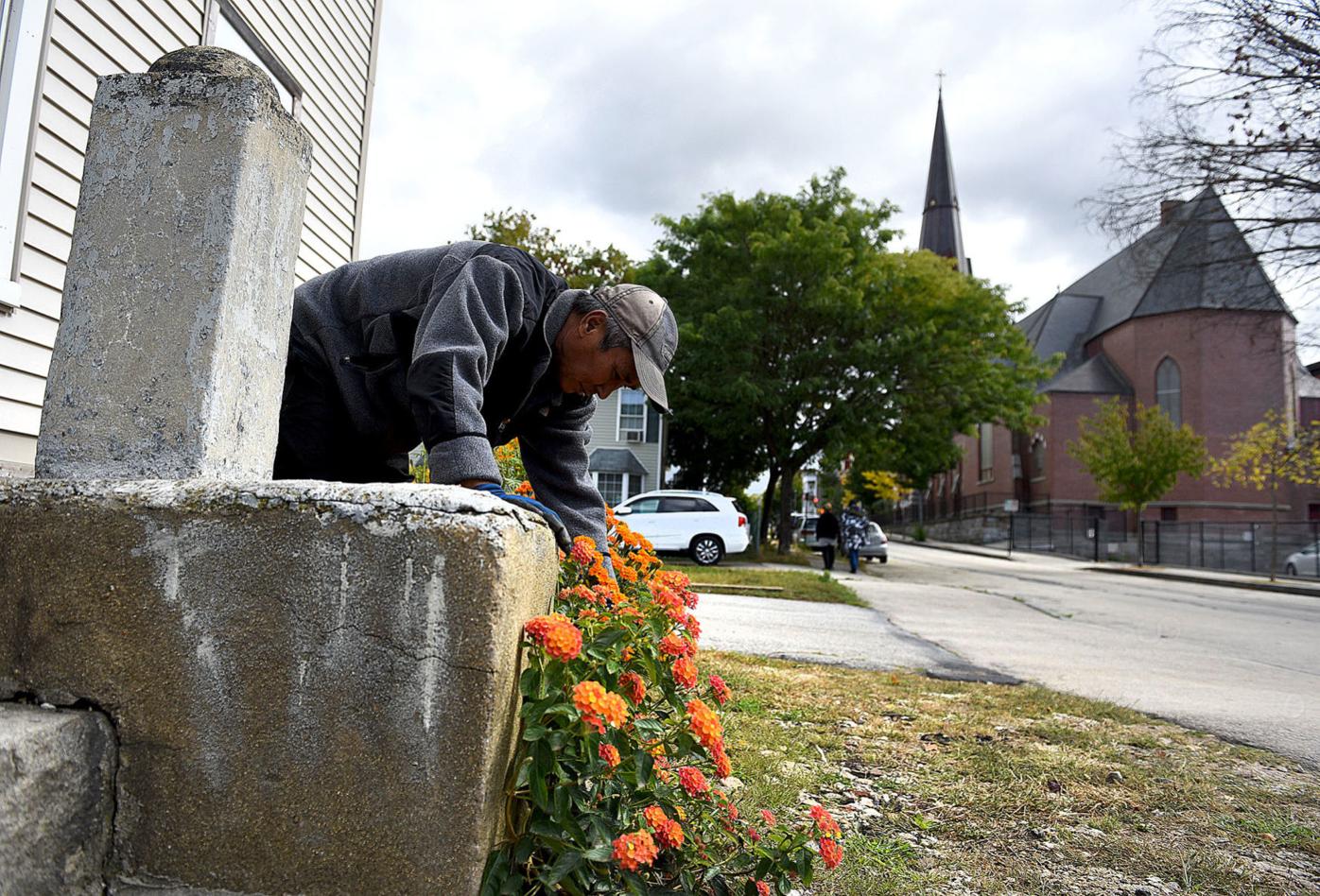 Bouchanh Kungxat works in his garden on Spruce Street just west of Beech Street on Oct. 4, 2019. He lives in a neighborhood likely to be designated for persistent poverty.

Drive south on Beech Street past Hanover Street — in the part of Manchester where officials don’t put up warning signs or bike lanes to slow traffic — and you will likely see Lisa Dugas playing with her young children.

They play in a happy yard, a yard littered with well-used kid toys, including a plastic playhouse where a down-and-out guy took shelter during a night of heavy rain last month.

Her building — a pea-colored, three-story tenement, the first after Cumberland Farms — represents a checkpoint of sorts.

For the next 12 blocks, you will be in a neighborhood — actually U.S. Census Tract 15 Hillsborough (County) N.H. — that in all likelihood will be labeled a neighborhood of persistent poverty after next year’s census.

That means it will be the third decade in a row where at least 20% of the population live at or below the federal poverty level.

It’s a neighborhood where people get knocked over the head and robbed of what little they have. Where drug dealers openly solicit customers.

Where people such as Dugas say they’re stuck.

“Not to sound crazy, but I almost think that’s what the people want. They want the poor to stay poor,” Dugas said.

For example, she and her three kids got dropped from the N.H. Healthy Families plan after Dugas got married, and she and her wife barely exceeded the income guidelines, she said.

So she buys at thrift stores, doesn’t have a TV, suffered through the summer with only fans, and struggles to pay for the prescription diapers that her 10-year-old autistic son needs.

The 24-square block neighborhood is bounded by Hanover, Beech, Valley and Union streets.

It’s mostly triple-deckers where vinyl siding masks the exposure to lead, bedbugs and mold on the inside. The neighborhood has a few bodegas, a city park and playground, and a number of churches.

It’s a neighborhood where the city has upgraded the sidewalks, curbs and lampposts over the last decade. Not so much expectations.

“This is the 'Zone,'” said Aleisha Maggio, who lives on Cedar Street and uses the decades-old nickname for the center city.

In the most recent community survey, the Census Bureau estimated that 31% live below the poverty line. If the 2020 Census bears that out, the Zone will join two others census tracts — the neighborhood immediately to its west and the downtown/Millyard — as tracts of persistent poverty.

One other city neighborhood is on the edge like the Zone — the ‘Squog. That’s the West Side neighborhood where the city lets an unlicensed junkyard operate because officials are afraid of taking possession of polluted land for back taxes.

City decisions on zoning, land use, school district boundaries and housing codes can all lead to concentrations of poverty, she said.

And it can end up like a pit bull chasing its tail — bad schools or perceptions of crime prompt those who can to move out, schools and crime get worse, more move out.

“They made this area for poverty,” said Justin Choice, whose lives in an $1,100-a-month Spruce Street apartment and was detailing a car in his parking lot, a small business he recently started.

No one’s building better homes, and the neighborhood remains infested with drugs, he said.

She is 36 and lives with her mother and father in a $1,200-a-month three-bedroom apartment. Thy family grew up in Londonderry, but lost their home to medical bills, said her mother, Vicki LaRochelle.

Her husband, a retired machinist, is a Korean War veteran. He drinks. And he’s twice gotten mugged on his way to the corner store, she said.

“We’re not poor. We’re below medium, but we’re above poverty,” LaRochelle said.

She said landlords need to do a better job maintaining their property and screening tenants. Recently, a child next door to her was poisoned by lead paint, she said. She and her daughter complained about refugees who don’t speak English and aren’t used to American customs. They said homeless have nowhere to go.

But again and again, Maggio complained about drugs.

Street level dealers hang out at the parking lot of a Union Street bodega, they beckon her to sample their crack or fentanyl. The Zone is a tough place to live when, like Maggio, you’re in recovery for a year and a half  and your counselors tell you to avoid triggers.

“What I’m being taught and what is going on in this city is not matching,” she said.

There’s nothing inherently wrong, according to Brennan, with a concentration of poverty.

What’s wrong is how people react to it.

“The problem in part is about stigma, about disempowerment and scapegoating the poor for the problems in the city,” Brennan said.

She suggests talking to the people who live in neighborhoods with persistent poverty. Not at a forum where everyone gets a turn at the microphone, but a less formal setting, such as a community picnic, where people can speak in a relaxed setting.

“If the city wants to address concentrated poverty, they should talk to folks and ask them what they want for their future and their kids’ future,” Brennan said.

When I spoke to Dugas, she was outside on a sunny afternoon with her 4-year-old. Dugas grew up in Derry in a family headed by a father who made a living as a water well contractor. They lived in a big house and had two vacations a year. Her kids don't get everything she did growing up, but they get love, Dugas said.

And that means planting flowers and taking her kids outside to play, despite the neighborhood.

“It needs awareness,” Dugas said about poverty, “and not in a negative way. It’s OK to be poor. It’s OK to ask for help.”

Mark Hayward's City Matters appears Saturday in the New Hampshire Union Leader and UnionLeader.com. He can be reached at mhayward@unionleader.com.