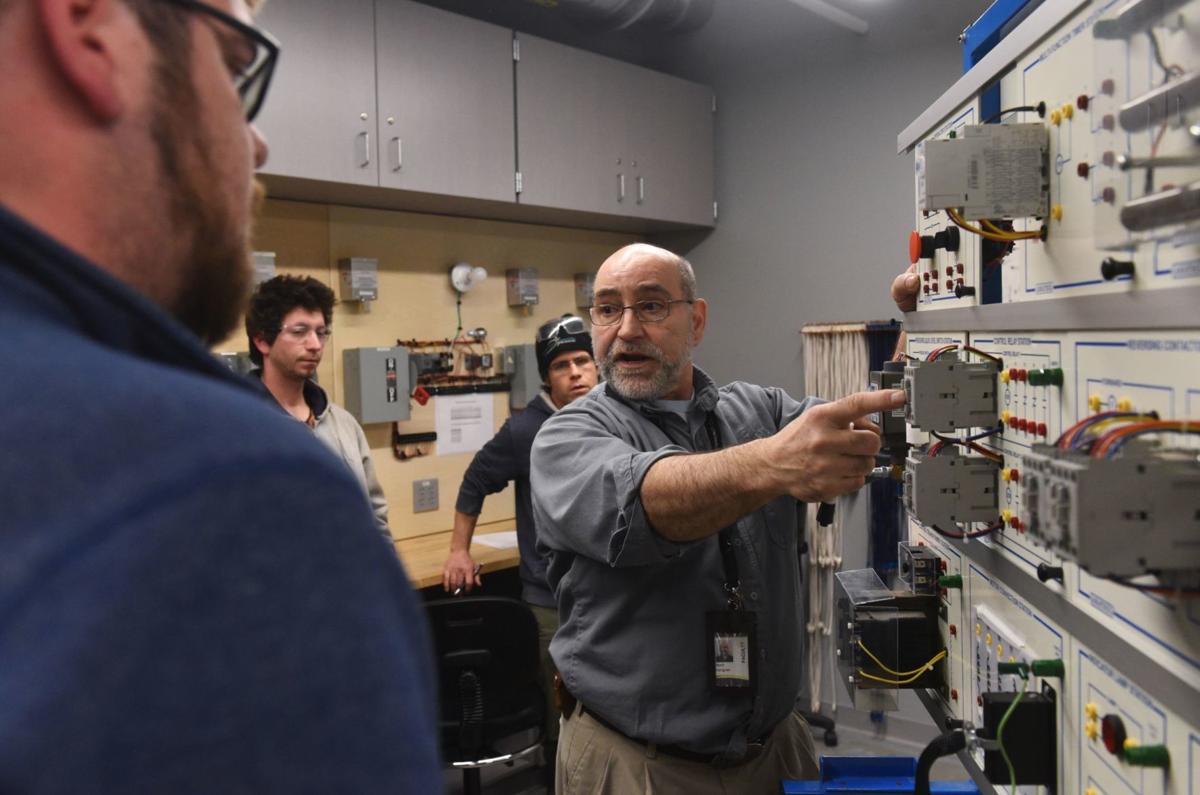 Norm Carignan teaches a power transformers and rotating machines class in the Environmental Technologies building at Manchester Community College in Manchester on Jan. 31, 2019. 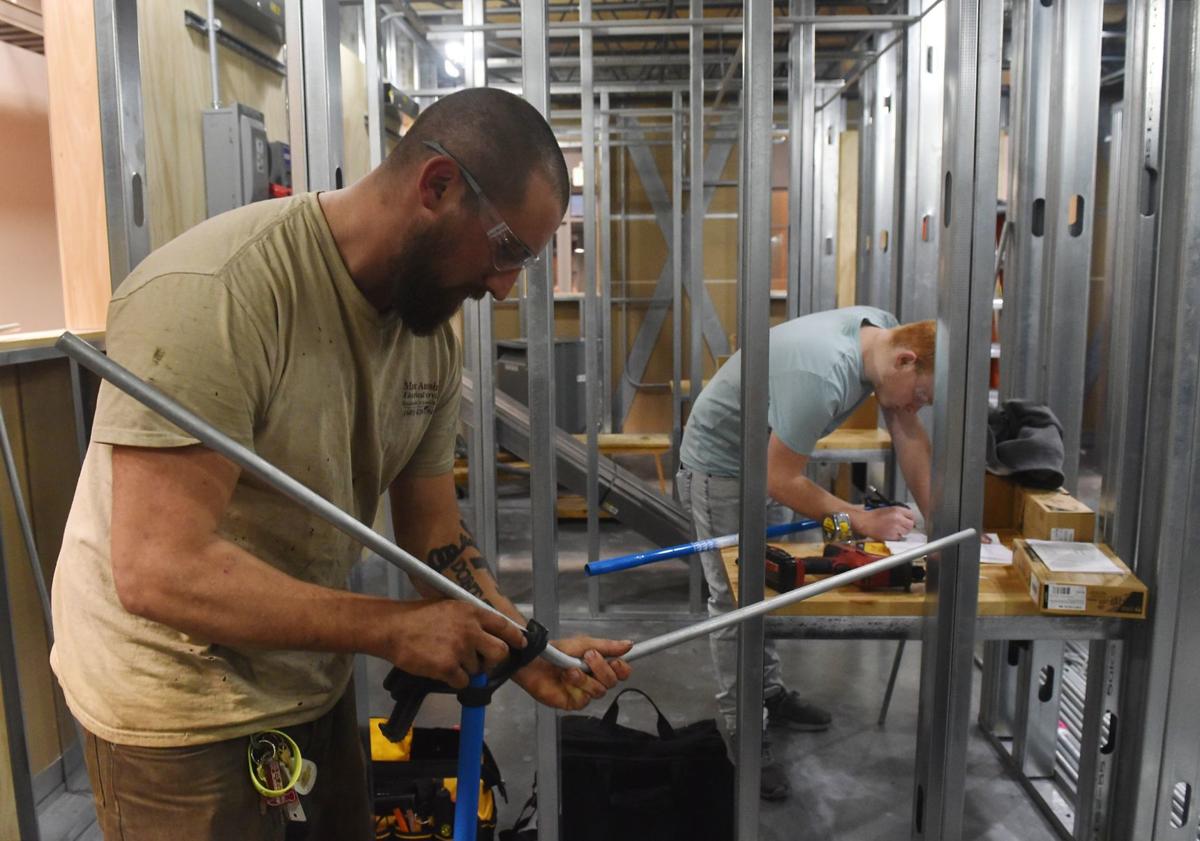 Reuven Aucoin, of Bradford, bends a conduit pipe in the Residential Commercial and Industrial Wiring class in the Environmental Technologies building at Manchester Community College in Manchester on Jan. 31.

Ten years into an economic expansion, and the national and state economies remain churning for a simple reason – toys.

An economy that offers toys like self-driving cars, phones that can outpower mainframe computers, and legs made from steel and microprocessors is an economy with lots of disposable income that people can use to ... buy more toys.

Of course, toys need to be cared for, repaired and replaced at times. That’s why we have a new toybox in Manchester – the Advanced Technologies building at Manchester Community College.

This is where young men and women learn about toys that might not be as glitzy as the ones I’ve already mentioned. But the ones they’re using in their programs in heating, ventilation and air conditioning and in electricity are more necessary and enduring.

These toys clean, heat and cool air, then channel the result through a network of aluminum arteries to keep us happy and productive.

These toys allow me to type this column on a glowing screen in a lighted environment while coffee drips a few feet away.

The building is the latest on the MCC campus, which is located off Front Street and has grown with the need in Southern New Hampshire for technicians, trades workers and craftsmen.

At night, many of the vehicles in the parking lot bear the names and logos of local contractors, whose employees are putting in a four-hour course after working a day’s shift. Local businesses donated some of the money and equipment at use in the building, said Susan Huard, president of Manchester Community College, who gave me a tour of the $7.5 million building.

With all the equipment, instructors can emphasize bench work and lab work as much as book work.

It’s a place where someone can get out of a no-future retail job and learn how to wire circuits that keep homes, office buildings and factories plugged in and logged on.

It’s where massive amounts of electricity, as much as 480 volts, can be tamed with transformers and pressure switches to power the motors that run advanced manufacturing operations.

The exterior of the single-story building has hues of circuit-board brown and chrome. Peer through the tall vertical windows and you see the showroom-clean equipment of the advanced HVAC program.

PVC pipes snake along walls and ceilings in tandem, splitting at the last minute to join boilers or compressors. The pipes carry labels to let students know the direction whatever material – air, water, gas – is moving and its temperature.

There’s on outdoor lab. The industrial-gray boxes and tree-size ducts of a rooftop air-handling system sit at ground level. The roof over the apparatus provides something students won’t find in the real world –shelter from any snow or rain that they will one day have to endure when fixing a problem atop a mill building.

In another lab, students were sticking probes into duct work to measure static pressure.

Although the building opened a year ago, the four students with adjunct instructor Jeff Gaumer comprise the first Advanced HVAC I class at the school. The college couldn’t offer the class without the building and the equipment, and until now young technicians needed to work with a journeyman to learn advanced HVAC, he said.

He can use computer controls to mimic the effects that a clogged filter or damaged coil can have on an air system.

“It’s always been technical, but it’s getting more so,” Gaumer said about commercial HVAC. “The industry in New Hampshire has needed something like this for a long time.”

Electricity is the other advanced technology program housed in the building.

In a classroom, electrical technology professor Norm Carignan discussed the do’s and don’ts of disagreements with code inspectors.

“One told me, ‘I’ll discuss anything with you all day, but I won’t argue with you,’” said Carignan, the department chairman. “Keep it professional.”

Other labs involve motor and industrial control systems. There are even four manholes between the basement and ground floor, where students can practice going underground.

Constantin Startun hopes to graduate from the electrical technology program in May.

Startun said he started in computer science at MCC, but opted for electricity when he realized he would be unhappy sitting in front of a computer all day.

“I love technology and I love to use my hands to build. The electrical field is both of them,” Startun said.

The handyman work involves wiring a building or a factory control system. The tech works involves following the schematics for an industrial motor circuit and negotiating the programmable logic controls that oversee building systems including alarms, security and telecommunications.

Startun, who works as an apprentice electrician for a local contractor, said there are other programs in Manchester where he could learn trades, but they involve PowerPoint presentations. MCC offers the real equipment.

He started working on solar systems at MCC about the same time he installed them at his job. He was making $15 an hour as a restaurant cook when he enrolled in the electrical technology program two years ago. He took a $4 an hour pay cut but has worked his way up to $16.

Once licensed, he thinks he’ll start at $20 an hour. Experienced master electricians can pull in $62,000 a year, according to figures provided by MCC.

“My goal,” said Startun, an immigrant from the east European country of Moldova, “is always to be the best.”

And with a toy box like the Advanced Technologies building, the best isn’t just possible. It’s fun.

Mark Hayward’s City Matters appears in Saturday’s New Hampshire Union Leader and UnionLeader.com. He can be reached at mhayward@unionleader.com.