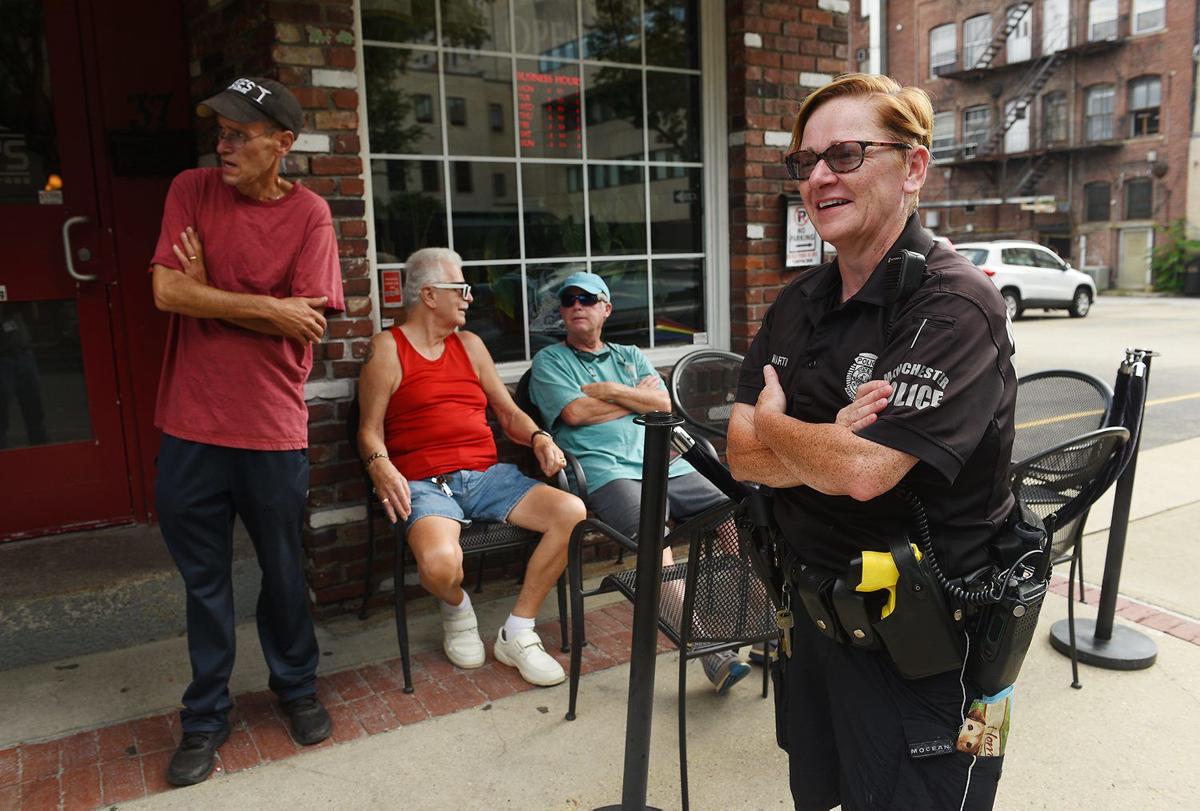 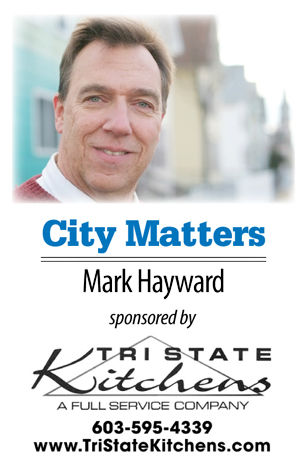 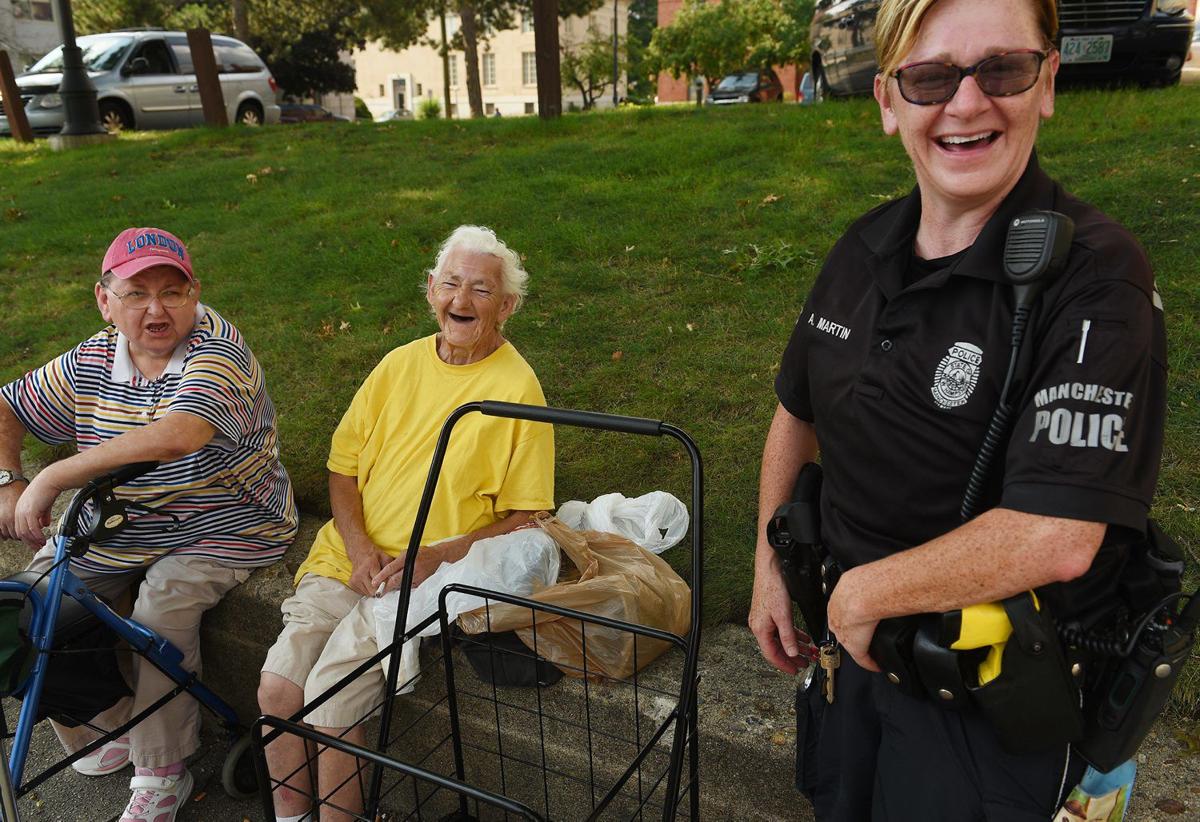 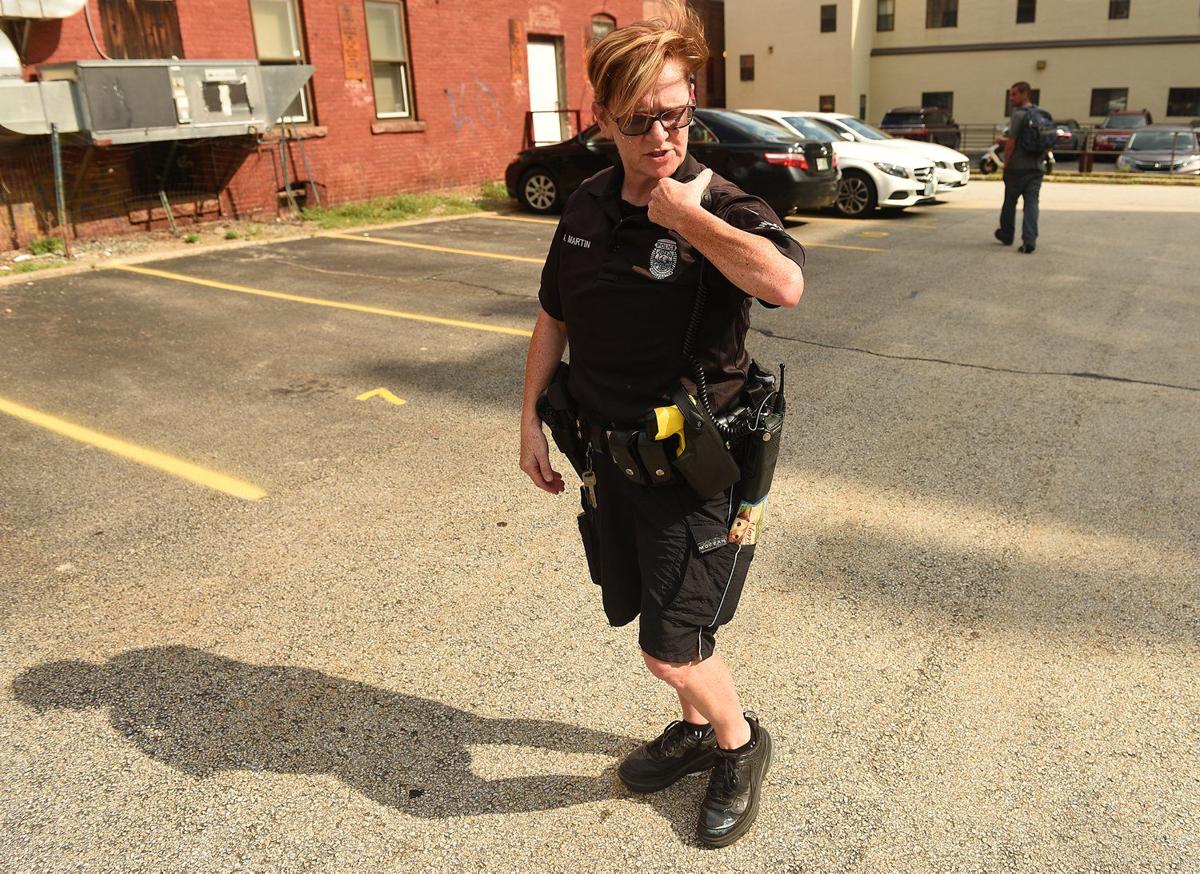 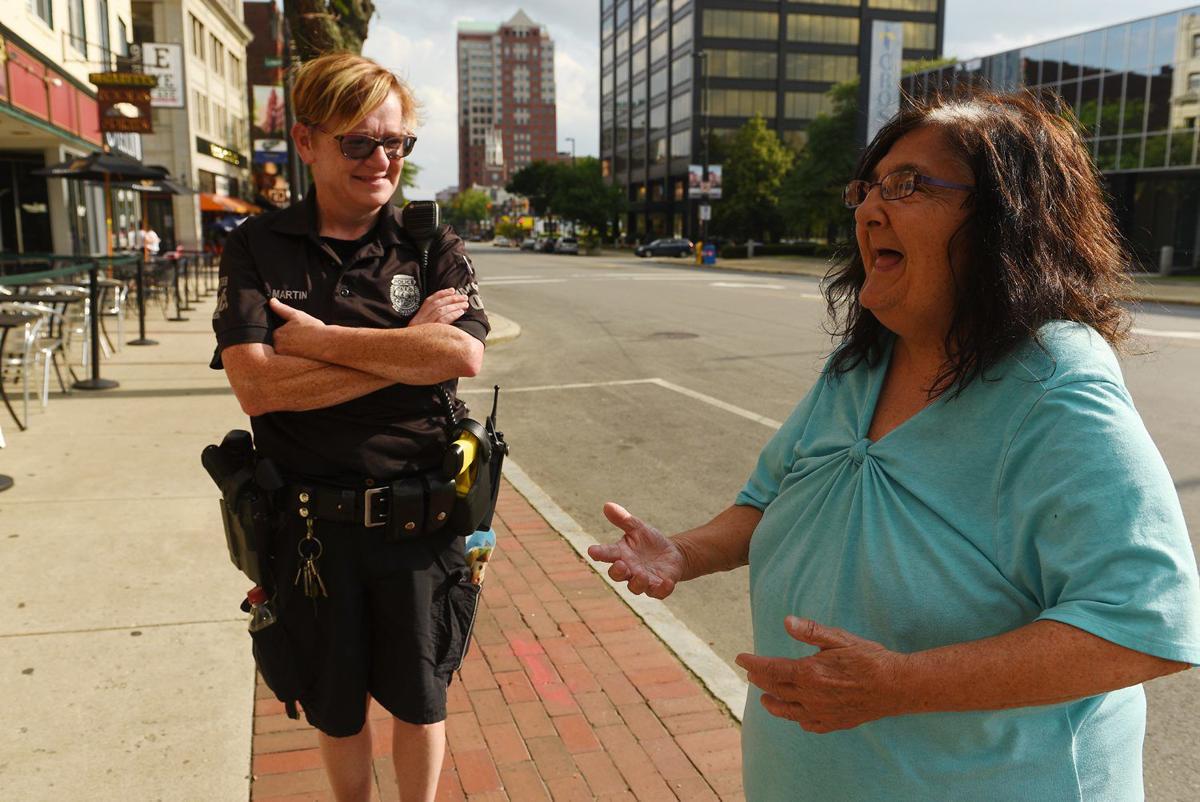 Officer Anna Martin talks with Linda Philibert, of Manchester, on Elm Street in Manchester on Wednesday. 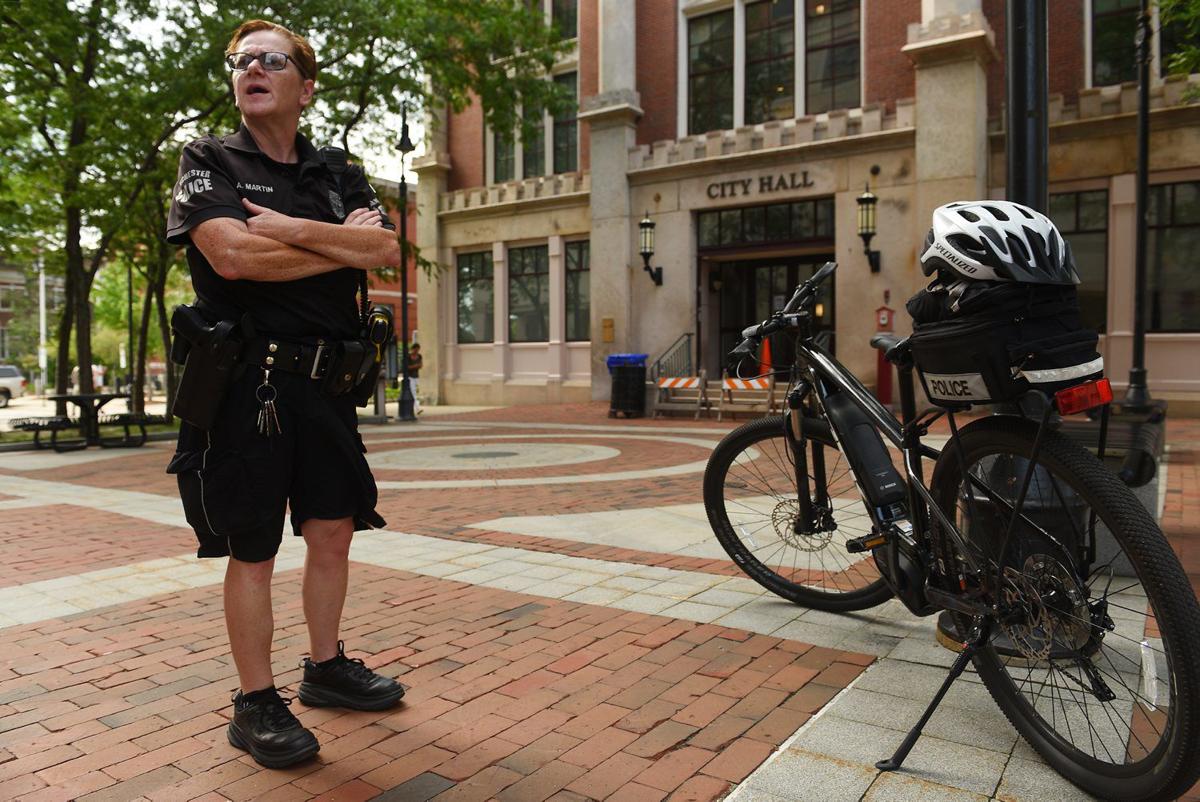 Officer Anna Martin gets ready to ride her electric bike on Elm Street in Manchester on Wednesday.

Officer Anna Martin talks with Linda Philibert, of Manchester, on Elm Street in Manchester on Wednesday.

Officer Anna Martin gets ready to ride her electric bike on Elm Street in Manchester on Wednesday.

In our high-tech, STEM-loving world, we reflexively expect technology to solve all our problems.

Money woes. Crime. Traffic jams. Poverty. Jobs. Whatever the challenge, one can rest assured that an app exists to make everything right again.

Anna Martin isn’t an app. But Martin, a street cop of 18 years, is playing a big role in addressing the problems of panhandling, sidewalk snoozing and petty crime that have irritated the downtown community over the past few years.

In a low-tech, Officer Friendly kind of way, Martin walks or pedals throughout the downtown weekdays from noon to 8 p.m.

She stops to ask shop owners or their employees if everything’s OK. She gives dining and drinking recommendations to visitors. She encourages people on the margins to improve their lives.

“She’s always checking on us to make sure we’re safe,” said Ray Sweet, co-owner of Doogie’s Bar and Grill on Manchester Street.

Sixteen months ago, Martin started the new job of police foot patrol in the downtown.

“She knows everybody: all the business owners, all the employees. It’s amazing how she knows everyone’s name,” said Tim Baines, the Manchester alderman who represents the downtown and has pushed for a response to panhandling and homeless presence in the downtown.

“She’s certainly brought a level of comfort and security to people doing business around here,” said Baines, owner of the Mint Bistro restaurant.

I made the rounds with Martin for about 90 minutes this week.

She spoke to workers or owners at three businesses. She joked around with elderly people enjoying a smoke outside the Hugh Gallen housing complex. She stopped rush-hour traffic so workers could cross Elm Street safely. She produced treats for dogs.

Ever mindful of public scrutiny, she waited for the pedestrian light before crossing the street.

“When I first started doing this job, I felt awkward,” said Martin, who speaks with an Irish brogue from her native country. “People would stare at you and ask if everything’s all right.”

Martin was a corrections officer at Valley Street Jail for five years before joining the police department.

She was the first Manchester female police officer to do undercover drug buys but has spent most of her career in uniform. Before the foot patrol, Martin was assigned the downtown area in a cruiser, so she was a natural for the new role, said police spokesman Lt. Brian O’Keefe.

She now makes one or two arrests a week — for example, if she sees someone wanted on a warrant, or if a domestic incident takes place in the apartments or rooming houses in the immediate downtown area.

But mostly, she uses encouragement to keep people in line. She encourages people to not trash property, not drink in public. Her glance prompted a driver to turn down his boom box.

“She does her job, but she’s the nicest cop I know,” said Carrie Randall, who spoke just outside of earshot of Martin. Randall said she used to be homeless and drink in Veterans Memorial Park. Martin would ticket Randall at times for public drinking. Now a recovering alcoholic, she credits Martin with cleaning out Veterans Park and for encouraging Randall to straighten out.

To be sure, panhandling hasn’t disappeared from the downtown, despite Martin’s presence. For one, the American Civil Liberties Union has won a court case against the city that upholds the right to panhandle. And after I said goodbye to Martin for the day, I hadn’t walked a block before someone hit me up. He spoke in a whisper, almost intimidated to ask.

Three people who work at downtown businesses said panhandling is less prevalent than it used to be. Martin, who repeatedly stressed that she’s not the only cop involved in the effort, downplayed her role in any reduction in panhandling. Fewer people are inclined to give nowadays, she said, since they realize they are likely feeding a drug addiction.

But by putting a cop downtown, the city is sending a message: If we can’t get rid of the panhandlers, we let people know they haven’t taken over. Martin pointed to two people who were sitting on the sidewalk with a sign asking for money.