Whenever we Americans feel threatened, we buy guns. 9/11, election of Democrats, coronavirus pandemic. We buy guns. Then we relax our laws so we can put them to good use, as New Hampshire did in 2011 when it passed a stand-your-ground law. Comes in handy sometimes.

For example, last month Manchester drug dealer Isaiah Rivera-Perez, told cops he had the right to shoot and kill a 17-year-old home invader fleeing from his apartment (along with his stolen weed) because of the stand-your-ground law.

Last summer, Bouchard, 24, put a bullet into the face of a possible burglar who was crawling out of his garage. Attorney General Gordon MacDonald has determined Bouchard had a valid self defense claim and never brought charges against him.

But he still faces legal troubles. 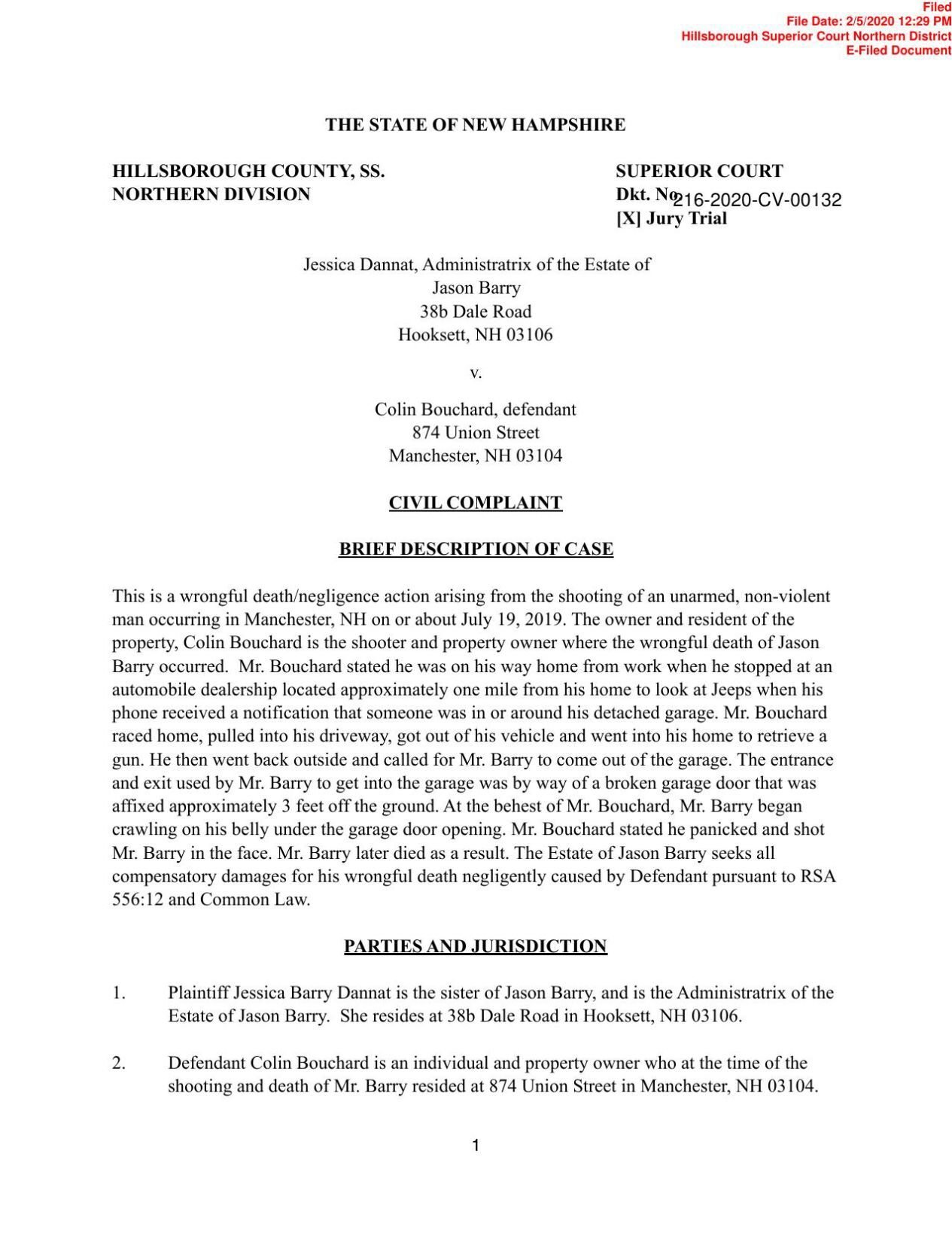 His victim’s sister, Jessica Dannant, has brought a wrongful death claim against him. On top of that, State Farm insurance company has sued Bouchard, saying it shouldn’t have to cover any jury award because his homeowner’s policy covers accidents, and the shooting was no accident.

Or as the legal papers read, “When Bouchard fired his loaded gun at (Jason) Barry’s face, the resulting injury was expected and/or intended by Bouchard.” 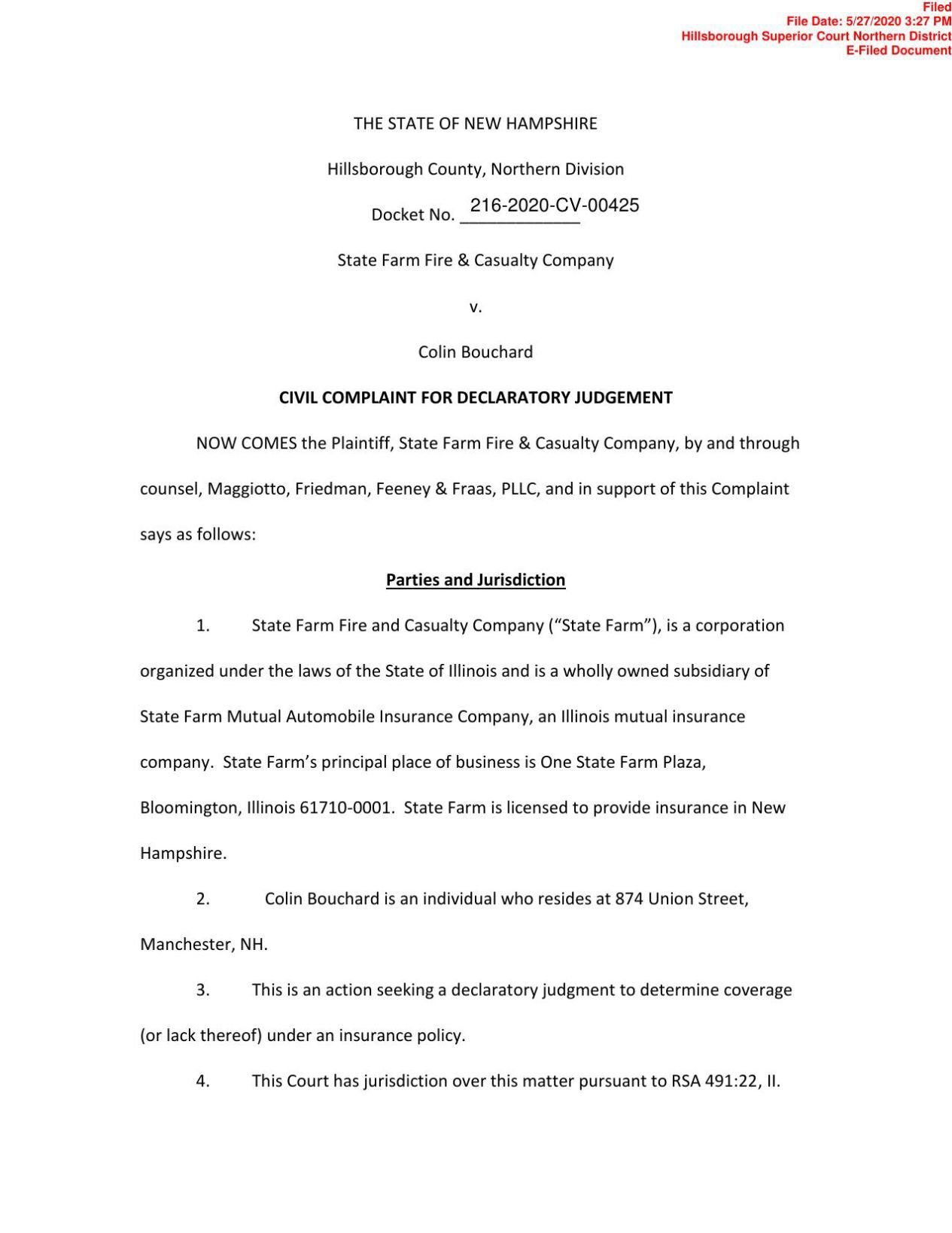 A little recap on the case.

Bouchard grew up in Bedford, went to Trinity High School and was accepted into the U.S. Merchant Marine Academy, according to internet sites and Union Leader archives. He got a job as a quality engineer at gun-manufacturer Sig Sauer and had recently purchased a two-family home on a middle class section of Union Street

Just before midnight on July 18, 2019, he was at Bonneville and Sons looking at some Jeeps. (Reports never explain whether he could legally be at a closed dealership looking at Jeeps.) His phone pinged him that his Netgear video surveillance system had picked up movement inside his garage, which fronts an alley behind his home at 874 Union St.

He didn’t call the cops.

He drove home, got out of his pickup truck, went inside his house and retrieved his 9mm Sig Sauer P365.

The garage door was open about 2 feet off the ground, and Jason Barry, 42, began to crawl out from under the door. Bouchard told Barry to stop. Barry didn’t, and Bouchard shot him.

Barry worked as a landscaper. He had a couple dozen run-ins with the law in his early years. But he had found a passion in life — disc golf. The local disc golf community embraced him, and two months before his death he had won an amateur tournament and decided to go pro.

His sister has said that her brother may have been waiting for his girlfriend, who lives near Bouchard, to get out of work and was retrieving a disc when shot.

In a 29-page report released late last year, MacDonald’s homicide prosecutors said Bouchard could not see one of Barry’s hands, and the hand could have had some kind of weapon. Hence he had a self defense claim the prosecutors didn’t think they could beat.

The state’s self defense law doesn’t require Bouchard to call the cops. And as the report points out, it doesn’t say he has to retreat into the safety of his home. It doesn’t state that the use of force must be imminent. It doesn’t even say a shooter has to reasonably believe he faced harm.

All he has to do is believe that he was likely to be assaulted.

But even that’s in doubt.

When police arrived, Bouchard didn’t tell cops that Barry was going to kill him. He said “I didn’t mean to” and “I’m so sorry.”

“I had my gun in my hands and I, I panicked because I didn’t know what he had in his hands, then I noticed he had nothing.”

“A 4-year-old daughter will never have the benefit of a father,” Levasseur said. Levasseur said he takes Bouchard at his word and he panicked.

It’s disingenuous, he said, for State Farm to argue that it wasn’t an accident.

Bouchard’s lawyer said the ultimate question is who is responsible for Barry’s death.

“What caused what happened was the actions of Mr. Barry himself,” said Sabin Maxwell.

A judge has combined the State Farm case with Dannant’s case, creating a pretzel of a legal case that could allow for twisted outcomes.

Two things to take away from this. First, although New Hampshire law may allow a shooter to claim self defense, a shooter may still face lawyers who get paid on contingency and insurance companies whose policies don’t cover stand-your-ground justice.

And shooting someone, even a potential burglar, isn’t all swagger.

From the Attorney General’s report:

“After shooting the man, (Bouchard) grabbed the man and asked him multiple times, ‘Are you alive?’”