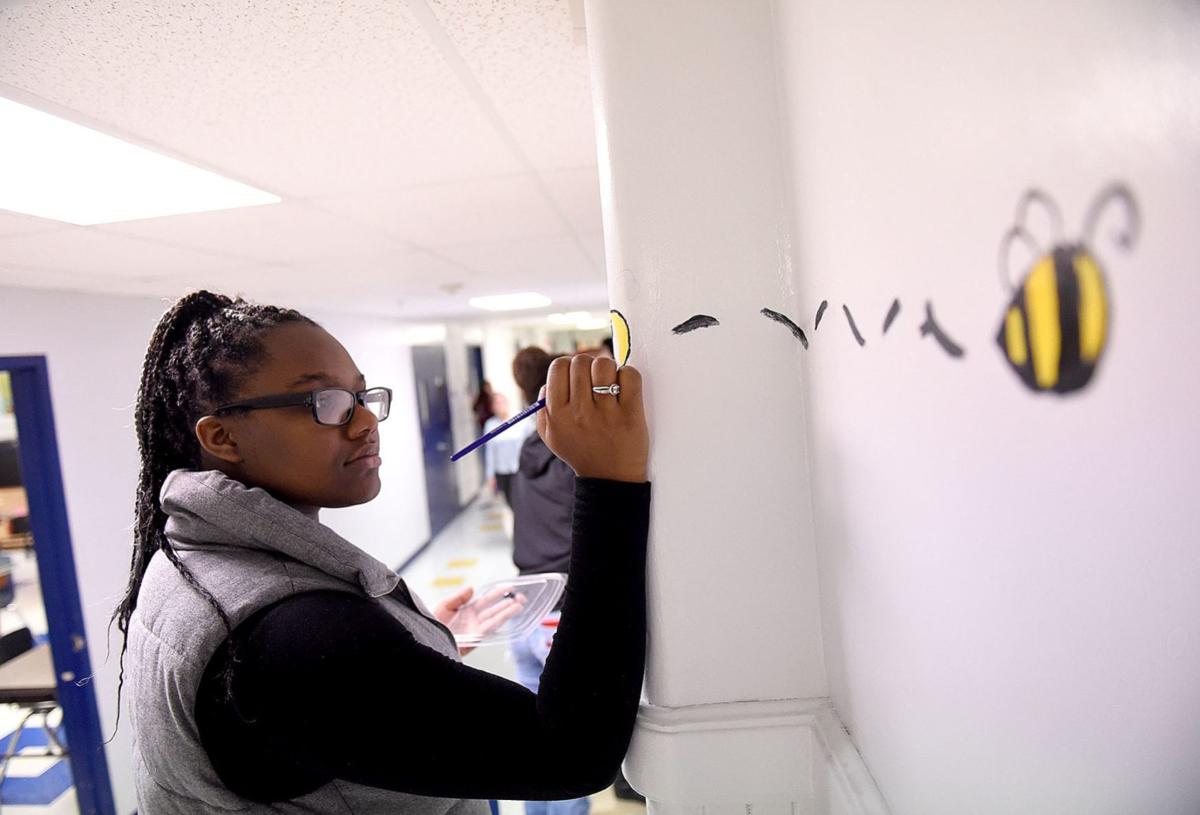 Senior Kimiya Parker-Hill works on a collaborative art project in a hallway of West High School on Wednesday. She helped shape a new program for learning at West. 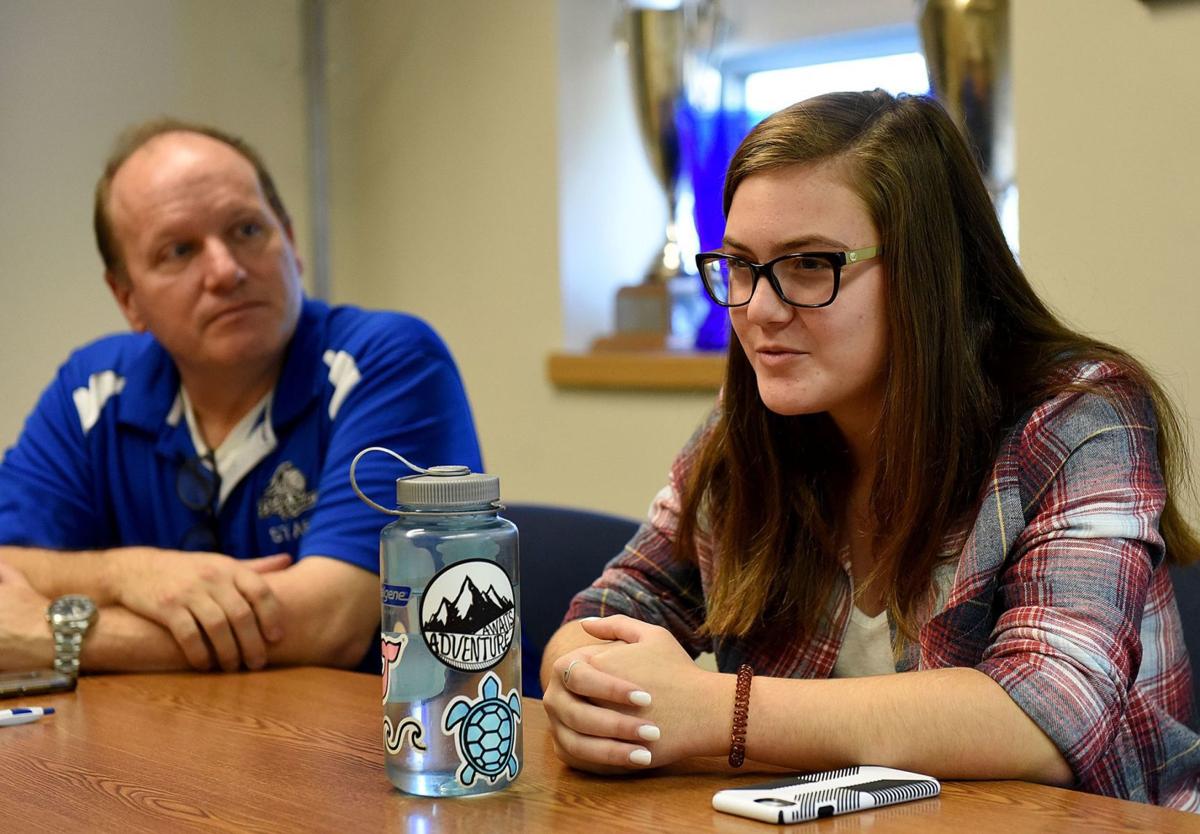 Manchester West senior Olivia Deleault speaks with a reporter about the school’s redesign as Leo Ducharme, a social studies teacher, looks on. 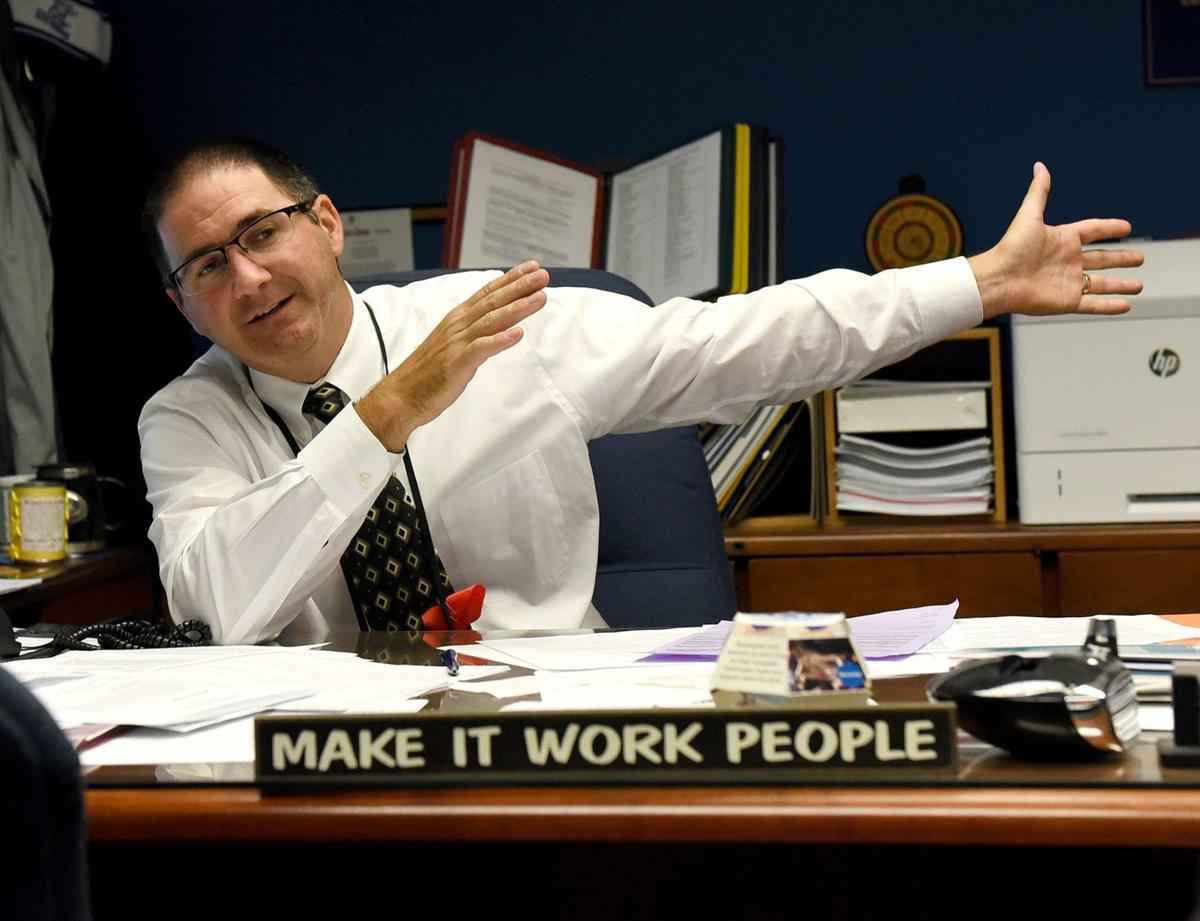 “The end goal is for you to ultimately control what goes on in this building,” Principal Richard Dichard told freshmen at West High recently in an introduction to the school’s new approach.

Is West High – the city’s smallest high school – about ready to shed its bad reputation?

The school’s image took a hit in 2007, when Bedford decided that West no longer matched the town’s suburban image, pulled out and built its own high school. West then limped through a string of short-term principals. I remember a state education official labeling it a “dropout factory” in 2014.

And two years ago, a rape at the school provided political fodder in Joyce Craig’s campaign for mayor.

Bad numbers, a worse reputation. Short of tearing down the building, what could be done?

This year, West launched a turnaround, a redesign plan developed over the last two years by administrators, teachers and students.

The reworked West involves some of the newest education trends – block scheduling, competency-based grading, real-world job experience. Sprinkle that with a spirit of student-teacher collaboration and some strategic rule bending, and you have what West calls “the Redesign.”

To be sure, West is the runt of Manchester’s three comprehensive public high schools. Its student population of 804 is a little more than half of Central (1,470) and Memorial (1,400).

But what better place to institute change than a place where small means nimble and intimate?

Two years ago, the Barr Foundation, a Boston-based foundation that encourages educational innovation, wrote a check for $300,000 just to plan the redesign.

Principal Richard Dichard and a team of teachers and students traveled to other schools around the country – as far away as San Diego – to see a redesigned school in action.

Then this year, the foundation followed up with $500,000 to implement the changes.

“We really want to make this a more personal place, a home away from home,” Dichard said.

A visible change took place about two weeks ago when I visited.

Although it was 10:30 a.m., kids were sitting in the cafeteria in small groups. Some were studying, but most were doing what teens excel at – chilling. It was a good place to find an audience for anyone who wanted to start a fight or mouth off, Dichard said.

No more. That day, the principal broke the news: The cafeteria would no longer host study-less study halls. The students were dispersed to smaller classrooms where they would have to sit at desks to, perhaps, study and do homework.

Before they were hustled away, a few of the students complained to me about the new block scheduling, which they found confusing and put too much free time on their hands.

But there is a reason for the free time. Blocked classes are about 50 percent longer than a normal 50-minute class, and students attend them every other day.

So, the free time can be spent at internships or job shadowing, outside learning opportunities that Dichard anticipates for every student. (That has yet to start, but the school has contracted with a youth development workforce agency to place West students.)

The free time has some unexpected consequences. Richella Simard’s community art class filled up with students unnerved by all that extra time. They painted murals on a school wall. Next up are geometric symbols for walls in the adjoining school district offices.

Eventually, students will paint a tree of life in a three-story stairwell.

Simard, a West High graduate herself, said she wouldn’t have suggested the murals had the redesign not cultivated an atmosphere of creative thinking.

“The doors are open,” she said about opportunities.

“Education ends up being a competition. Learning and education shouldn’t be that,” said Robin Dearborn, a math teacher.

Recently, Dichard met with freshmen to introduce them to the redesign. He told them he was bending a few school district rules. They can wear an ear bud, but in one ear only. Hats, but no hoodies, are OK in the hallways and cafeteria. No phones in class, but texting and using phones for classwork is OK out of the classroom.

“The end goal is for you to ultimately control what goes on in this building,” he said.

Dichard said he has several measures for success regrading the dropout rate, the attendance rate and the percentage of graduates going on to college or trade school.

He’s already encouraged by some numbers. The West enrollment is up by about 50 this year. And the graduation rate in 2018, at 73 percent, was up 10 percentage points from the 2016 rate.

Dichard attributes that to an early effort of the redesign – reducing the number of leveled classes, a mainstay of Manchester education but what he said perpetuates inequity in society.

Walk through West and you see signs of change. Students have a slightly bewildered look on their faces.

The redesigners hope those looks of confusion will eventually form into faces of focus.

One could argue – and West does – that its reputation is misplaced. It hosts Jr. ROTC and the city’s STEAM program. Its minority participation in advanced placement exceeds the district. Its sports teams are starting to win. And, it may soon be leading the city into a new century of education.

“I don’t think it’s ever going to end,” science teacher Mary Kate Hartwell said about the redesign. “I think we’re going to be constantly evolving.”